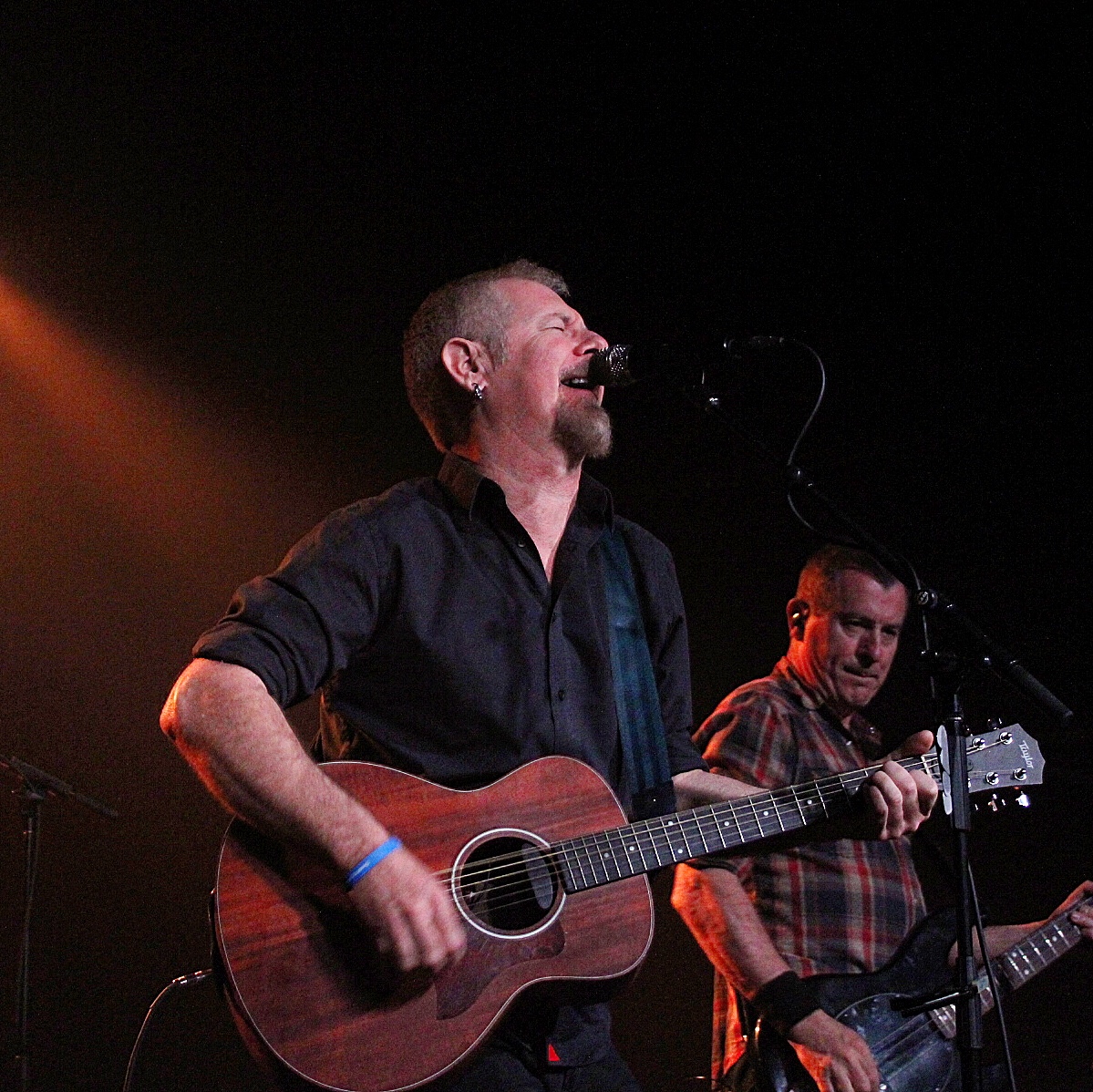 The moment the entire band took the stage, I knew I was in for a really fun night.  The Young Dubliners seemed in great spirits, and the crowd was ready to go. The show started at a high level with the song “Seeds of Sorrow” from their latest album 9.  People were dancing and singing a long as if it was the middle of the show.

Keith Roberts told me following the show that he had been suffering from a cold so he didn’t feel in top form vocally.  He mentioned that his lower notes were “better than they had ever been.” Inferring that his voice wasn’t as strong as it normally is.  I would respectfully disagree with that sentiment. I thought Roberts’ vocals sounded excellent. If anything, his gravelly voice and lower register added some extra pop to the performance and his sound.

While I was taking photos up front for the first three songs, I enjoyed observing the band and the way they communicated with each other.  A glance here a nod there seemed enough to be consistently on the same page. They seem to really like each other and being in this band.

The crowd seemed familial in a way.  If I didn’t know better, I would have thought the entire audience were one big Irish family reunion.  People were singing to strangers next to them, clinking their bottles together in a “Cheers” type fashion.  I even noticed a couple of guys Irish dancing in circles around two women that I’m pretty certain they did not know.  The women were laughing and clapping along to the song. I honestly kept thinking ‘Does everyone here know each other but me?’  People were that friendly with one another. I’m sure the Jameson and Guinness intake participated in the warm feelings, but I think this type of music totally lends itself to everybody letting things go and having a good time.

At one point in the concert, Keith Roberts told the audience he wanted to try something that the band hadn’t previously attempted in Utah.  He wanted everyone to scoot in close to one another because as Roberts put it, “You won’t be needing your hands for this one. So you can get in real close!”.  He then invited the audience to display their best traditional Irish dancing for the duration of the song. Traditional Irish Dancing is usually done with both hands straight to the side and along your body.  The legs and feet do all the work. It was fun to watch the audience attempt this. I have to say, they did a pretty great job! There were a few people who just could not help themselves and they would throw a hand in the air, or pump their fist.  But for the most part, the entire audience gave Irish dancing their best shot. It was like Riverdance meets Van Morrison.

When I “Tell Me Ma” was performed I told myself that that was the song I was going to mention as my favorite of the night.  And that still might be the case, but The Young Dubliners did not make that decision an easy one. Songs like “Waxies”, “Carlow”, “Rocky”, or “A Pair of Brown Eyes” made me second guess my pick.  The face of the matter is, The Young Dubliners played one favorite song after another. So I can’t really say that I had a favorite. What I will say is when I heard “Tell Me Ma”, I smiled. I smiled real big.  And each time the lights hit a face, an enormous grin was attached.

The band returned for two encores and they were gone.  So I thought. If the concert wasn’t amazing enough, I think I may have been most impressed with what happened after the concert.  About five or ten minutes after walking off stage, all the members of the band stepped out from backstage and walked to where the bar and merch table was.  They signed autographs and chatted with the remaining fans. They were so casual and friendly with everyone listening to and genuine in their acceptance of the praise they received.  They didn’t seem to be in a rush to return backstage at all. It was really an awesome thing to watch. I was able to chat with guitarist Justin Pecot. He has been with The Young Dubliners for just over a year.  To be honest I didn’t even know he was standing next to me until someone walkedup to him. He was so unassuming and gracious with everyone who talked with him. I was impressed because some of the comments were pretty random.  Possibly another Jameson side effect. He’s the kind of guy you are happy for. Meeting Keith was a real pleasure. We had been communicating through email setting up coverage for the show. When I introduced myself he began talking with me like we were old friends.  It makes sense that the concert had such a friendly vibe to it. It all starts at the top with Keith.

Despite the many opportunities, for whatever reason this was my first time getting to see The Young Dubliners.  Judging from this show, I get why people come back each time. Each member of the band is extremely talented, they seem to love what they’re doing, and that energy flows into the audience.  This was a really fun concert and I challenge anyone to just try to not have a good time at a Young Dubliners show. After that concert I’m officially ready for St. Patrick’s Day!