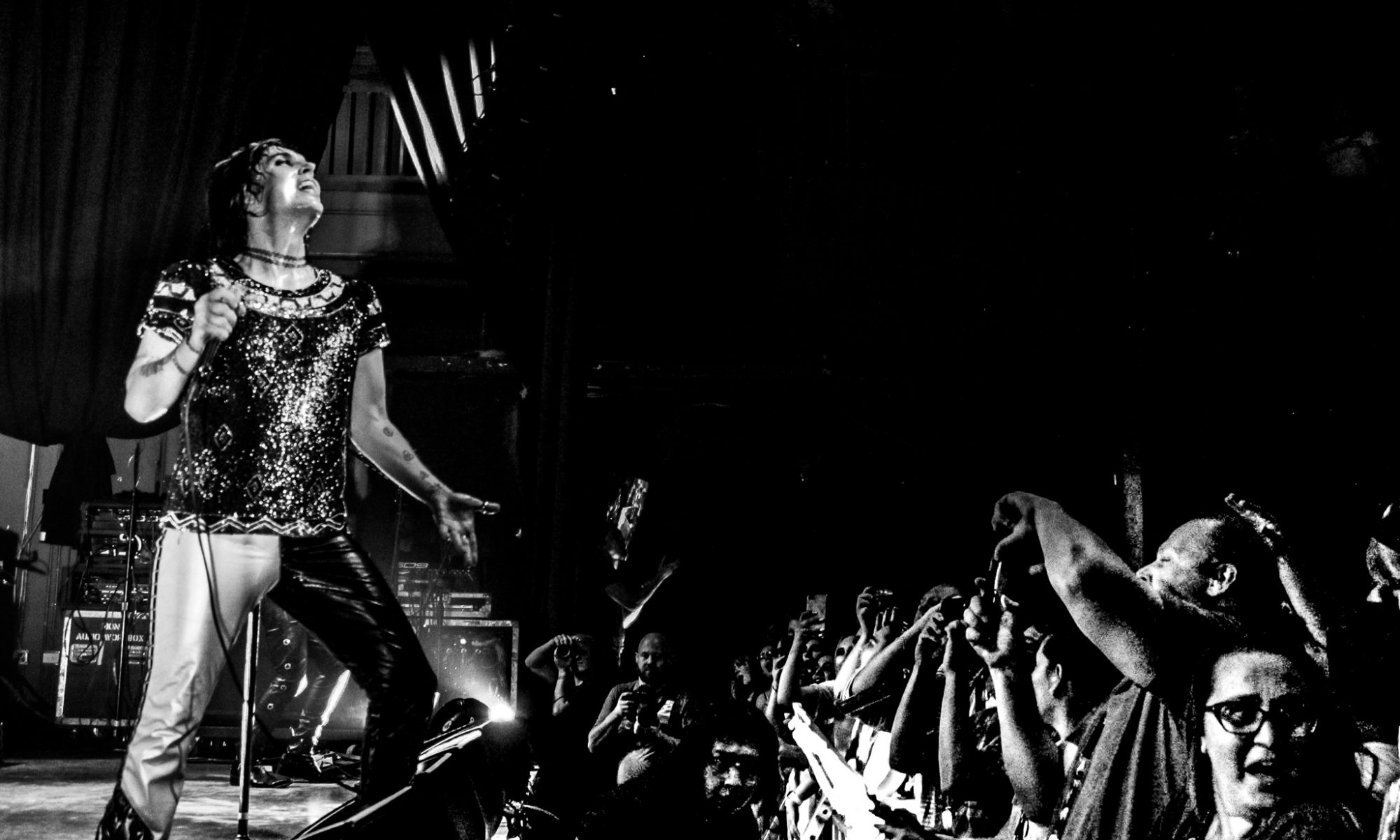 So I saw The Struts last night.  I could easily save us some time and just write, “WOW!” and be done with my review.  There is just so much to say about this show so I’ll continue writing. But, WOW you guys, Wow.  The Struts played to a fired up sold-out crowd at The Depot on Saturday night. This was just the third time The Struts have played Utah.  After seeing this show I instantly regretted not having seen them the other two times.

How would I describe The Struts?  That’s a tough one. If there was a mad scientist trying to put together the ultimate British rock band I imagine this scientist would go into his lab and create The Struts. He/She would take a bit of Queen, a smidge of Oasis, a drop of Def Leppard, and The Who.  Then He/She would inject a few CCs of Bowie and Jagger to finish things off. The Struts are the Frankenstein Monster of Brit Rock. And yet their music is all originally fresh and exhilarating. It would be easy to say, “This band sounds like this other band or that band.” and implying they’re just ripping off other styles. But that is not the case here.  Yes, they sound heavily influenced by the great British rock bands of the past, but they don’t sound like they’re mimicking them. So in this case stating that The Struts emulate, legendary bands is actually a huge compliment. And how great of a band name is The Struts?! The only thing I don’t like about it is it’s hard to describe the band without using a bunch of puns.  To save you from that ’ll just say that this band is appropriately named.

From the first power cord, I knew we were in for a good night.  The Struts took the stage jumped right into “Primadonna Like Me”.  The crowd roared when lead singer Luke Spiller yelled out “Hey you! Don’t you know who I think I am?!’. At that point, the band and the audience were already in midshow form!  The heat inside The Depot was intense! The crowd was jumping and singing along to every word. I was up in the pit shooting photos at the beginning of the show and it was so hot!  If I didn’t know better I would have thought The Struts had already been playing for an hour. As I looked around I could see people all the way back to the bar dancing and going crazy.  When I looked up to the premium seats in the balcony I noticed that they were even standing! That does not happen all the time, folks! The energy level of the crowd stayed with the that of The Struts the entire night.  I didn’t’ know if they could do it, but they impressively hung in there.

If you’re going to talk about The Struts you have to talk about frontman Luke Spiller.  That guy is a force of nature. The amount of energy he expends is astounding. Spiller was nonstop!  I don’t think I’ve had a more difficult time trying to catch a photo of someone. He was all over the place.  I think 90% of my photos of Luke Spiller are blurry from him flying around the stage. The timing doesn’t add up, but I’ve almost convinced myself that he could be Freddie Mercury’s long lost son. His showmanship is unmatched today and the way he controlled and riled up that crowd was something I haven’t seen in years.  Then there are Spiller’s vocals. I couldn’t believe that he could be dancing and moving all over the stage like he was and yet he still sounded so good. He was totally on key and singing with tons of power. I look at my Spencer and my jaw was on The Depot floor. I just said, “This guy is incredible!”. He replied, “This guy loves what he does.”.  And he’s right. There’s no way he can do what he does night in and night out without completely loving it. I think the smile that was on his face for the majority of the show was a solid indicator that he was enjoying himself.

While I can go on and on about how amazing Luke was I want to talk about how much I enjoyed the rest of the band. Now their physical energy wasn’t the same as Spiller’s. But I liked that. I’ve seen band members try to match what the high energy guy in the group is doing and it takes away from what makes that person special. Guitarist Adam Slack may not have been running all over the stage but when he stepped up to the forefront and played one of his impressive guitar solos he made his presence known. I have always enjoyed the stoic bassist. Bassist Jed Elliott, for the most part, let his grooves communicate for him. But then he’d take that perfect power stance or move to the baseline just enough to turn heads. Then of course drummers have an energy all their own. Gethin Davies was up on that riser playing the beats that had the entire floor of The Depot moving. The Struts have the perfect visual aesthetic for a band.

I have found it so difficult to pick a favorite moment in the show. There were so many times when I would think “This is it. This is the pinnacle of the show. I’m definitely going to write about this.”, then five more things equal to that moment or exceeding it would happen. So the moment I’ll point out was during the final song of the main set, “Where Did She Go”, Spiller got the entire crowd to sit or kneel on the floor. And they did. And he said at the right moment everyone should jump up and go crazy. And he drew it out until the crowd could take it no more. When the moment came they flew into the air and went crazy for the duration of the song singing their hearts out. The passion involved with this show was extraordinary.

I liked that while things were at high voltage most of the night, the band stopped to appreciate the crowd and where they were in their careers.  Luke Spiller shared that The Struts have been signed and dropped many times over their time as a band. He said that many label reps would ask him to change his look.  But The Struts stayed true to who they are and it’s totally paying off. When Spiller asked how many were seeing the band for the first time I’d say at least 80% of the crowd cheered.  I was jealous of the other 20% that this wasn’t their first time. Luke then stated, that whether people in attendance had been with the band for years or just that night, “Welcome to the family!”.

Towards the end of the show, Luke called for a roadie to bring him a decibel meter to see how loud the crowd was. I think they’re checking with every audience. I’ll be very surprised if this show isn’t among the loudest if not the loudest on the tour. We reached 119.2 decibels. Not too shabby!

I’ve tried my hardest to refrain from being too effusive in this review but I can’t help it. This is exactly how I feel about this show! I don’t know that I’ve been impressed with a concert like I was with The Struts in a really long time. And I know I’ve used this comparison already but I kept thinking throughout the show that this must have been what it was like when people were seeing Queen for the first time at the Rainbow Theater way back in 1974.  The Struts are a band made for an arena or a stadium even. I just kept visualizing this show in a huge venue. They have the chops to entertain a venue of 20 thousand people. I was grateful to be one of the 1,200 at The Depot. It was a mind-blowing evening.