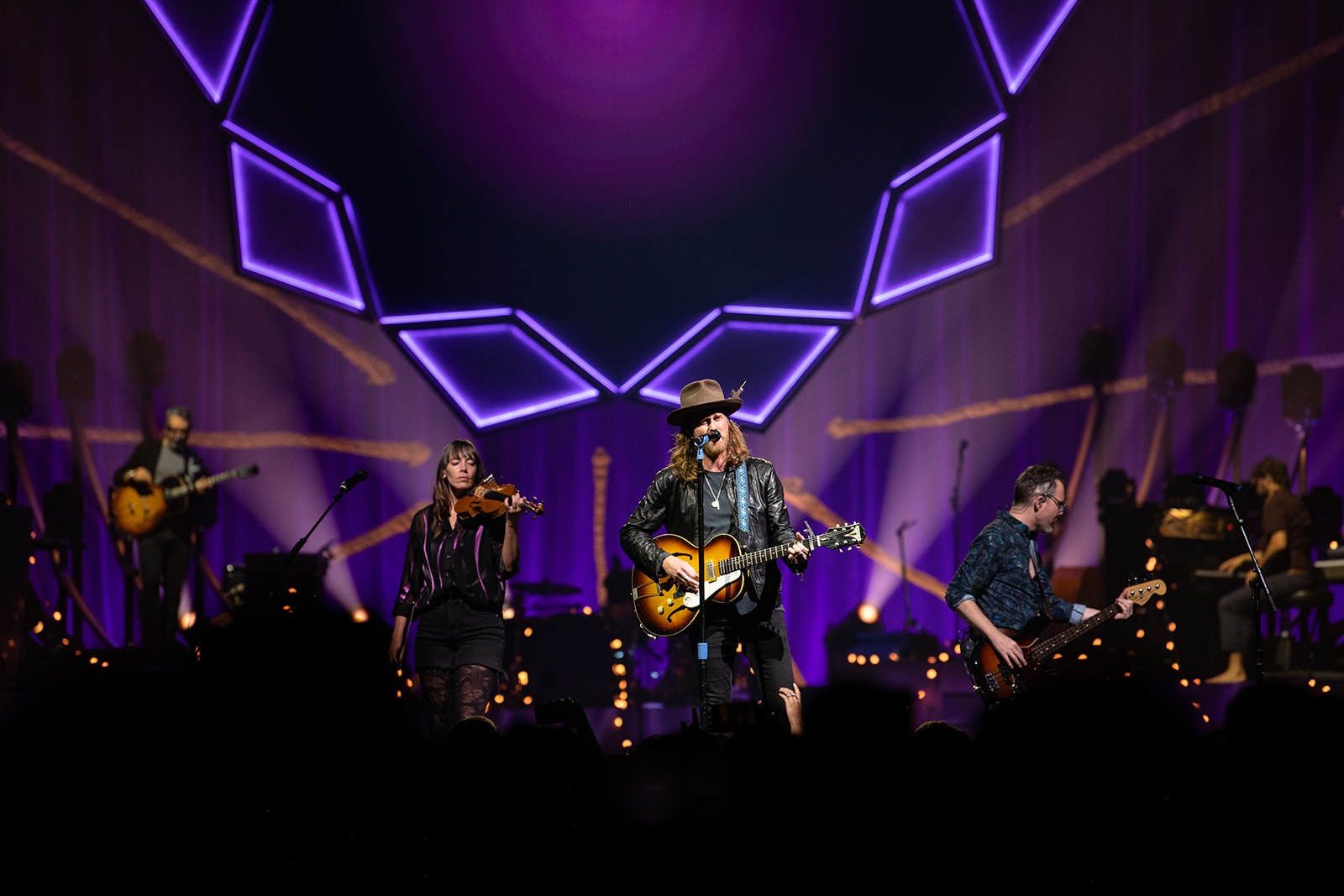 Two and a half years ago, thousands of local Lumineers fans purchased their concert tickets and were looking forward to seeing the impressive indie folk band perform live. After being postponed for 2 years due to the Covid 19 pandemic, The Lumineers finally had the opportunity to bring their Brightside Tour to Salt Lake City. On July 20th, the band played a fantastic show to a sold-out audience at the Maverick Center. As a fan myself, I felt overwhelmed with excitement as I arrived at the Venue. I had the opportunity to talk with a few other concertgoers, who were eager for the night to start. One couple told me how they had become Lumineers fans after seeing them open for U2 at a concert in 2017. While a couple of young girls mentioned they had been fans since middle school, and couldn’t believe they were finally at the concert.

The night began with Daniel Rodriguez. Joined by two other musicians, Rodriguez did the job of a first opener really well. The entire eveing was set to a good pace with “Steal the Night Away”. We knew it was only the start of great things to come. He followed that with “As I Am”, Colorado/Idaho”, and “Glimpse”. Rodriquez finished his set with the 2022 single “Mixtape”. I hate to say that I hadn’t heard of Daniel Rodriquez before this show. But he’s a talented songwriter and I hope to hear much more of him in the future.

Rodriguez was followed by a Utah favorite, Gregory Alan Isakov. It’s always so awesome when Isakov plays Utah. It was pretty clear from the crowd reaction that many of the people in the audience were there specifically for him. Playing a support set, I knew we just weren’t going to get enough from him. But Gregory squeezed 9 songs into his short 40-45 minute set.

Gregory Alan Isakov opened his set with “Southern Star” off of his 2018 album Evening Machines. Turns out Gregory’s set would be Evening Machines heavy. He also played “Dark, Dark, Dark”, “San Luis”, and “Caves” from the album. He has so many great songs. I don’t know how he was able to choose just 9. This seems like an effective way to do it. Pick one of your amazing albums and play half the set from that. Worked for me! As always Isakov’s band was excellent. They’re so good and yet I feel like I could just sit and play with them around a camp fire. The set ended with “All Shades Blue”. The crowd was very warm to Gregory and his band. They were a perfect match with The Lumineers. Who were up next!

The energy at the Maverick Center was wild as soon as the stage lights came on signaling that the band would soon be stepping out. The Lumineers walked out to greet an entire arena full of fans. All on their feet, cheering as loud as they could. The enthusiastic crowd transitioned quickly from cheering to singing along with their first song of the night, “Brightside”. The energy of the audience was easily matched by the energy of the band; it was clear they truly enjoyed what they were doing.

After a 2 year wait, they wasted no time delivering on what everyone had been waiting so long for. They jumped right into some of their most popular songs like “Ho Hey”, “Cleopatra”, and “Angela”. The poetic lyrics, captivating vocals, and beautiful instrumentals all contributed to the incredible ambiance in the venue. The vibes of the night evolved seamlessly with each new song. One minute you could feel the heavy beats flow through the entire arena while the crowd jumped, danced, and clapped in unison, then the next moment, The Lumineers would start singing something a little more soft and slow.

I watched as many fans would sway along, some getting emotional, obviously moved by the vulnerable songs and overall energy. Lead singer Wesley Schultz took a minute to share a personal story with the audience about their new song “Where We Are”, and his near-death experience that led him to write it. He talked about how he and his then-girlfriend, now wife, were driving in the rain on a highway in Arizona. They hydroplaned and their car flipped multiple times off the road.

He said “If you’ve had the unfortunate luck to be in a near-death experience it is like the movies in a way that time starts to slow down. Everything felt like slow motion as the car was flipping, and I kept thinking ‘We’re going to be all right. We’re going to be all right.’”. It was not the first time I heard this song. But as he sang, I thought about how much more it meant after hearing his story.

The Lumineers kept the crowd engaged throughout the night. I loved to see the way they interacted with their fans. Schultz would often kneel close to the people in the front while reaching out and touching their hands. Behind him, I watched the rest of the band continuously switch from playing one instrument to another, including a violin, a cello, an accordion, and 2 different pianos, multiple drum sets, and guitars.

My favorite moment of the night was when The Lumineers invited Gregory Alan Isakov and Daniel Rodriguez back on stage for a song. I heard from a good source that they are actually really good friends. Together they performed a cover of “Walls (Circus)” by Tom Petty & The Heartbreakers. I had chills through the entire song and thought they did an amazing job. As they were singing, I realized that at the last 6 concerts I have been to, 3 of them have performed Tom Petty covers. It’s easy to understand why his songs are covered so often. He is an absolute legend. I later learned that the Lumineers had the opportunity to open for Tom Petty just 6 weeks before he passed away in 2017. The audience enjoyed the special performance as they sang along with the chorus.

Wesley Schultz then told the crowd that the next song was for anyone celebrating their birthday that night. Halfway through their fun new song “Birthday,” confetti cannons shot off over the dancing crowd. The last of the confetti was still slowly falling as they started their next song “Big Parade”. One of my favorites. A few minutes later, Schultz sat on top of a piano with a single spotlight on him as he sang “Donna”. The crowd held up their phones to create a sea of lights as he sang the slow song accompanied by a soft piano melody. It was a pretty big contrast after the laser lights and confetti that filled the room shortly before. The Lumineers have mastered how to take their fans on a journey like this. The night seemed to flow perfectly.

The concert ended with an encore, and the last song they played was “Stubborn Love”. The crowd took over singing the last few lines as the band directed them to sing quiet and low and then told them to sing louder, and even louder. As the evening ended I heard someone behind me express how sad she was that the night was over. Her friend quickly told her not to be sad that it was over but excited that they got to experience it. I related to both those feelings as I left wishing the night could continue, but grateful I got to be there and experience it.