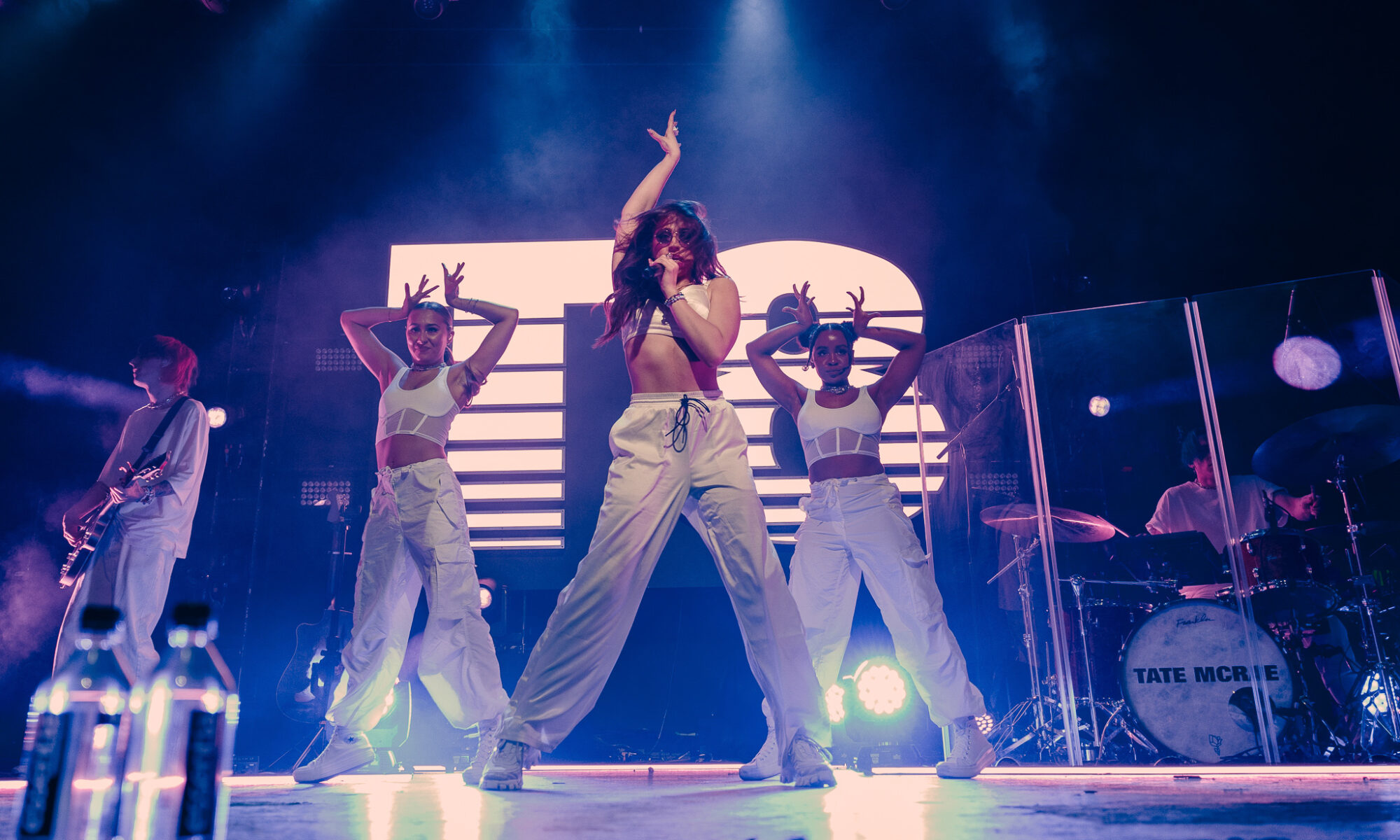 I learned that the girls at the front of the line had been there for over 6 hours. The doors opened at 7 and the crowd filled the venue very quickly. As I entered the Grand room the energy was clearly going to be one of the best I had seen. Waiting for the opening set to come on, there was a variety of music playing. It seemed like the concert had already started with everyone singing every word to every song that would play. Security was very friendly and was talking with the front row and the photographers all the way up until the first set came onto the stage. After about 30 minutes of waiting, the opening artist came onto the stage.

Although I had never heard of Mimi Webb, I ended up recognizing a few songs she played. The crowd favorite was her new single “House on Fire”. Mimi was interacting with the crowd in between every song. Which kept the energy very high. Her performance was amazing. I loved seeing the majority of the people I observed know every word to her songs as well. The stage had her name lit behind her. The venue did a very good job of making the opening set feel just as special as the headline. After a solid set, Mimi left the stage and began the wait for Tate McRae to come out.

Just after 9 PM, the lights went out and the speakers began to play a pulsing bass sound. The crowd became so loud that I could barely hear the music begin to play. As the light came back on, Tate and her two backup dancers were standing in the middle of the stage. She also had her name backlit behind her displaying a massive “T8”. She opened with one of her more popular songs “Stupid”.

After the first song, she stopped and greeted the crowd. The screams from the audience were overwhelming. She then slowed it down a little bit and played “R U OK?”. This is one of my personal favorite songs of hers. As she sang her way through the next few songs, the energy kept rising. I did notice she danced a lot more compared to other concerts I have attended. She would occasionally give the microphone to her backup dancer so that she could dance. I loved the addition of dancing rather than just standing in the middle of the stage singing.

A benefit of being the last show on the tour was that she had released new music since the beginning of the tour. She played her new single “Chaotic”, which was originally not on the setlist. The unsuspecting crowd loved it. She also surprised her fans with a cover of one of her favorite songs. She gave an emotional performance of The Script’s “Breakeven”. Sitting alone at the front of the stage on a stool, Tate McRae seemed to clearly have a close connection with the song. You could feel her emotions coming through the song. She also described how she had recently been through heartbreak and experienced many life changes. She seemed to put the fame and life of a young rising star into perspective.

McRae has developed a close connection with her fans. It was very apparent at this show. I noticed that more people were wearing the tour merchandise than not. The lines for the merchandise seemed just as long as the lines to get into the venue. Her management and staff were very kind and helpful. There were a few things to figure out given there was another event across the entrance in the Rockwell room of the venue. It was a much more mature audience than in the Grand room. I was impressed with how well The Complex was able to keep the two shows separate and enjoyable. They also were spot on with the production of the show.

The lights throughout the songs were perfectly used to compliment the performance. The sound quality of The Complex was as good as it gets. I was thoroughly impressed with how smoothly the venue ran this show. I do suspect that Tate could possibly be moving onto larger venues, however, I think this venue fit her perfectly for this tour. With The Complex hosting her last show of the tour, she gave a small speech before her closing song.

She expressed gratitude to all of her fans and supporters. And also reminded everyone of her new album that will release on May 27th of this year. Tate McRae closed with her most popular song “you broke me first”. It was an emotional moment for many fans as they sang their hearts out sad that the concert was almost over. As the song ended, the lights stayed on for a moment as the crowd cheered. The lights went out and Tate McRae officially ended her 2022 North American Tour.

Overall it was a great show for almost anyone who enjoys pop music. She displayed clear talent with her vocals, and also had plenty of performing experience. Tate will now join Shawn Mendes and open for him as he plays his sold-out arena tour. I would highly recommend you listen to Tate McRae and find a time to see her live.