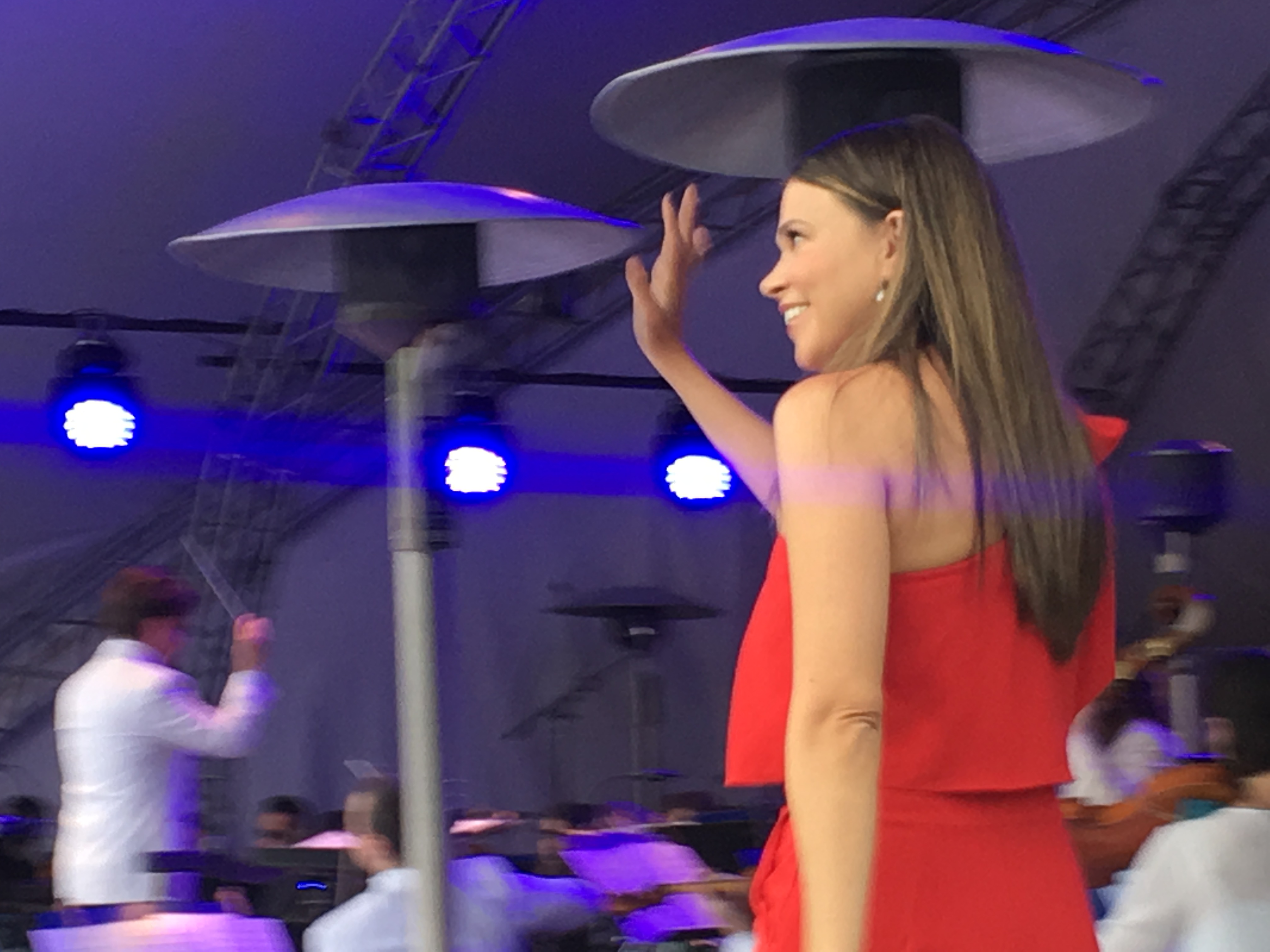 Sutton Foster was a surprise addition to this year’s Deer Valley Music Festival lineup.  This date was initially booked for Kristin Chenoweth. But it was reported that she was having neck issues and was needing surgery so she would have to cancel her scheduled summer performances.  Sutton was booked to fill the slot. Not a bad replacement I’d say. I asked a couple next to me if they had bought tickets for this event when Kristin was scheduled, or if they bought tickets specifically to see Sutton.  They told me that they had originally purchased tickets when Kristin Chenoweth was scheduled, but when they saw Sutton Foster was her replacement, they were more than excited. They said, “You can’t go wrong! Sure they’re different performers, but they’re amazing in their own way.  We would not have missed this show for anything. We love Sutton!”. That seemed to be the overwhelming sentiment from the others I spoke to.

I arrived about an hour early to Snow Park Outdoor Amphitheater.  I wanted to completely take in the experience of arriving early, having a picnic, enjoying the cool air, and visiting with the others in attendance.   If you’ve never done this, I highly recommend it. It’s so relaxing. 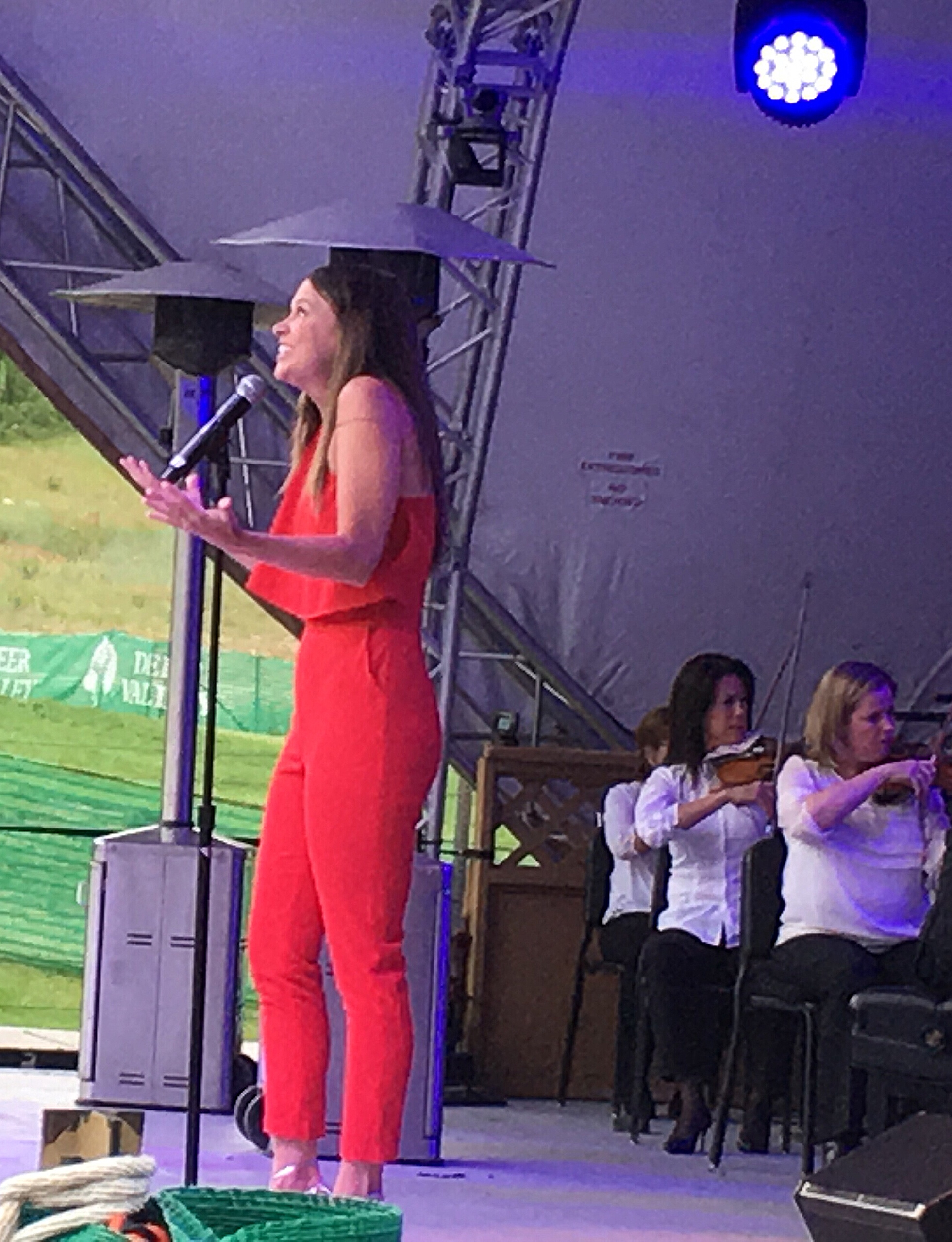 Sutton Foster took the stage at 7:30 performing one of what would be a number of medleys throughout the evening.  This one, in particular, consisted of “Cockeyed Optimist” from South Pacific, “Everybody Says Don’t” from Anyone Can Whistle, and “Yes” from the show where she won one of her two Tony’s, Thoroughly Modern Millie.  It was an excellent way to open the show.  It gave the audience a taste of Suttons personality and performance style.  After that, we were off and running.

Sutton mentioned that she had been in Utah for the past three days and loved it up here.  She stated that this was the “highest” she ever sang, referring of course to the altitude.  She told us that she took her 16 month old daughter on her first ski lift, and her daughter handled it really well.  She was very a proud mother.

Some special moments for me were when she revisited the musical Anything Goes.  Sutton was in the Broadway revival of Anything Goes in 2011 so it was fun to see her sing some of the memorable songs from that classic show.  She sang “I get a kick” and a song she actually sang in the musical, the title song “Anything Goes”, to close out the first half of the concert.

During the intermission, I spoke with a few people to see what they thought so far, and the reviews were all in the positive. They said things like “This is better than I could have ever expected!” or “I was really disappointed when Kristin Chenoweth canceled, but I’m glad I didn’t get a refund.  Sutton Foster is a treasure!”.

As the intermission was ending I noticed a young girl, maybe 13 years of age standing near the walkway where Sutton would return to the stage.  Sutton walked out, the girl waved hello, and Sutton responded with a kind wave and a hello back. It was a simple gesture, one that didn’t take much effort on Sutton’s part, but one that will no doubt remain in this 13 year old’s memory for a long long time.

During the intermission, some dark clouds began to roll in.  I noticed many nervous members of the audience checking the weather on their phones.  The wind picked up a little, but no rain had fallen just yet.

Sutton walked out and began singing a medley of “If I were a bell” from Guys & Dolls and “Singin’ in the Rain”.  The audience got a chuckle at the timing of this song.  Sutton played it up perfectly by nervously looking up at the clouds while singing.

I thought the Utah Symphony was magnificent in this concert.  They had such an opportunity to shine with this music and these arrangements, and they totally rose to the occasion.  I admire this symphony so much. The night before they’re playing with Rick Springfield, the night before they were playing Mozart, the weekend before they were playing ABBA and Bluegrass! Talk about being versatile.  And there is so much to learn! But they pull it off. I enjoyed their performance so much. 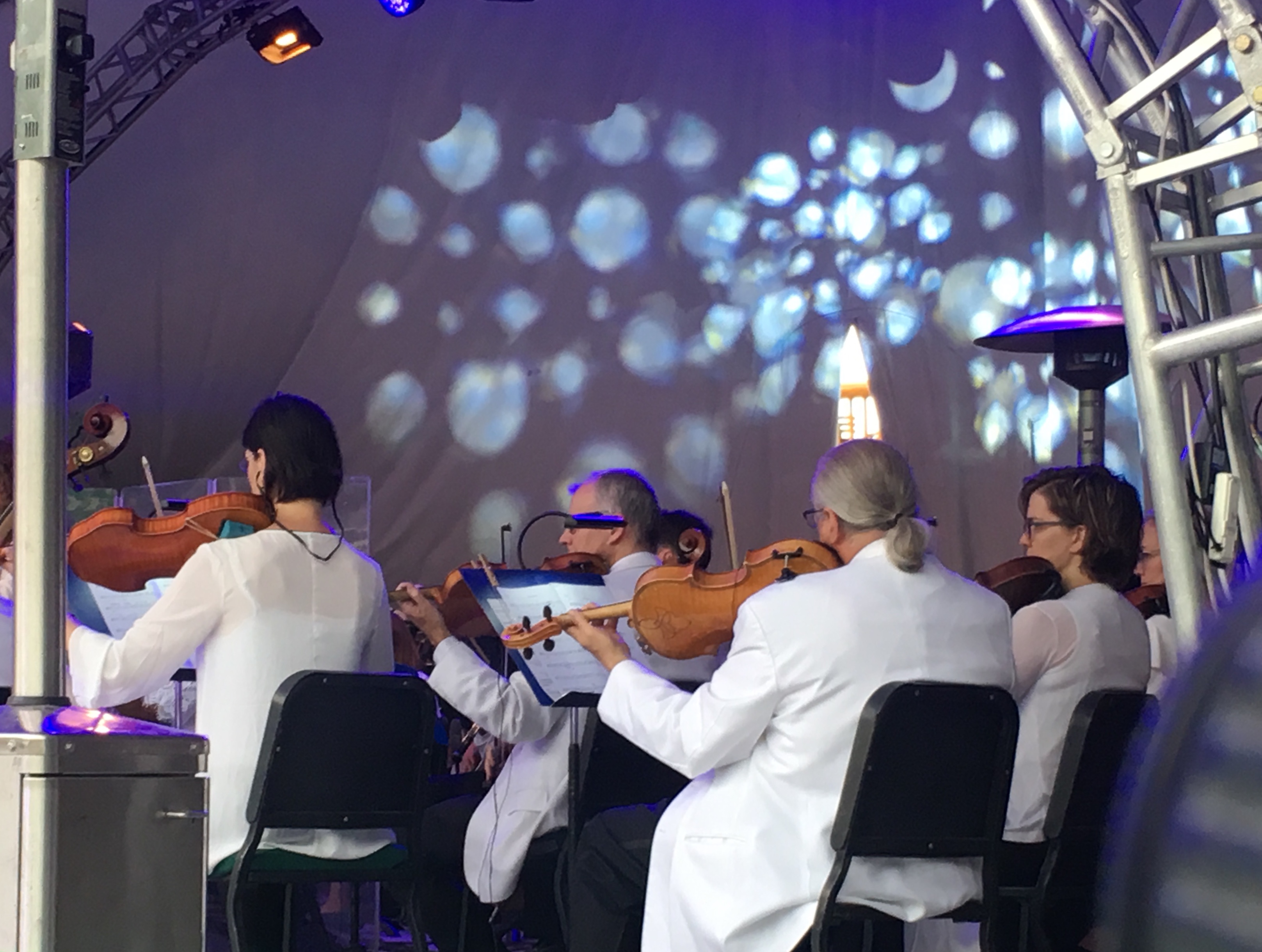 The biggest surprise of the evening was when Sutton brought her Little Women co-star and real life best friend Megan McGinnis on stage to sing with her.  They performed the song “Flight”. It was clear that they performed together many times. They had great chemistry and blended together beautifully. They seem to really enjoy performing together.   I always enjoy a surprise appearance at a concert.

Sutton performed a touching tribute to her mother who passed away a couple of years ago.  She told us that her mother loved John Denver and that they listened to his greatest hits on 8 track when she was a child.  She then performed “Sunshine On My Shoulders”. She gave a few looks up to the cloudy sky but didn’t play up the weather too much.  It was humorous, but not so much to ruin her tribute. It takes a brilliant actor to pull off a moment of levity without taking away from a serious moment.  Sutton is that kind of actor. 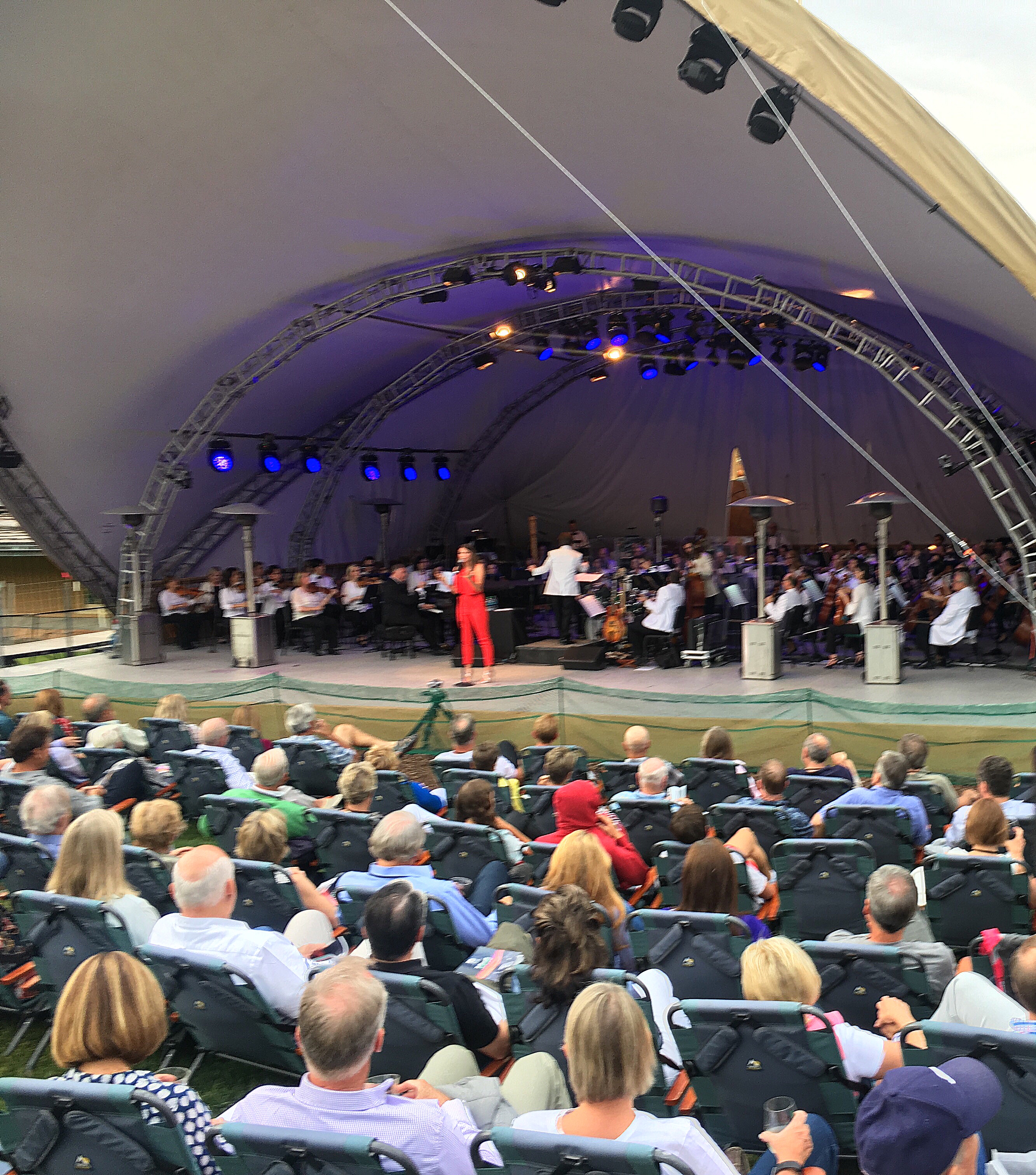 As the wind picked up and the show began to wind down, I noticed quite a few people exiting the show early to avoid the possible storm.  It made sense. No one wants to get rained on. But Sutton was so good, I felt bad that people were leaving. The many who stayed were treated to another great medley.  She performed “On My Way” using the wind to her advantage and letting it blow her hair back in the way you might see in a photo shoot. Before that Sutton had to hold her hair during the song to keep it from flying in her face.   It was funny to watch her make light of what cannot be ideal conditions for a performer.  The second part of the medley was “Gimme Gimme” from Thoroughly Modern Millie. The crowd was excited because this was a big show stopper for Sutton in that musical.

She finished the song, and the audience jumped to their feet.  Sutton put on a fantastic show. It was entertaining throughout, including a little suspense due to the weather.  We all stayed dry, and we enjoyed seeing a two time Tony Award winner deliver a performance worthy of those accolades.