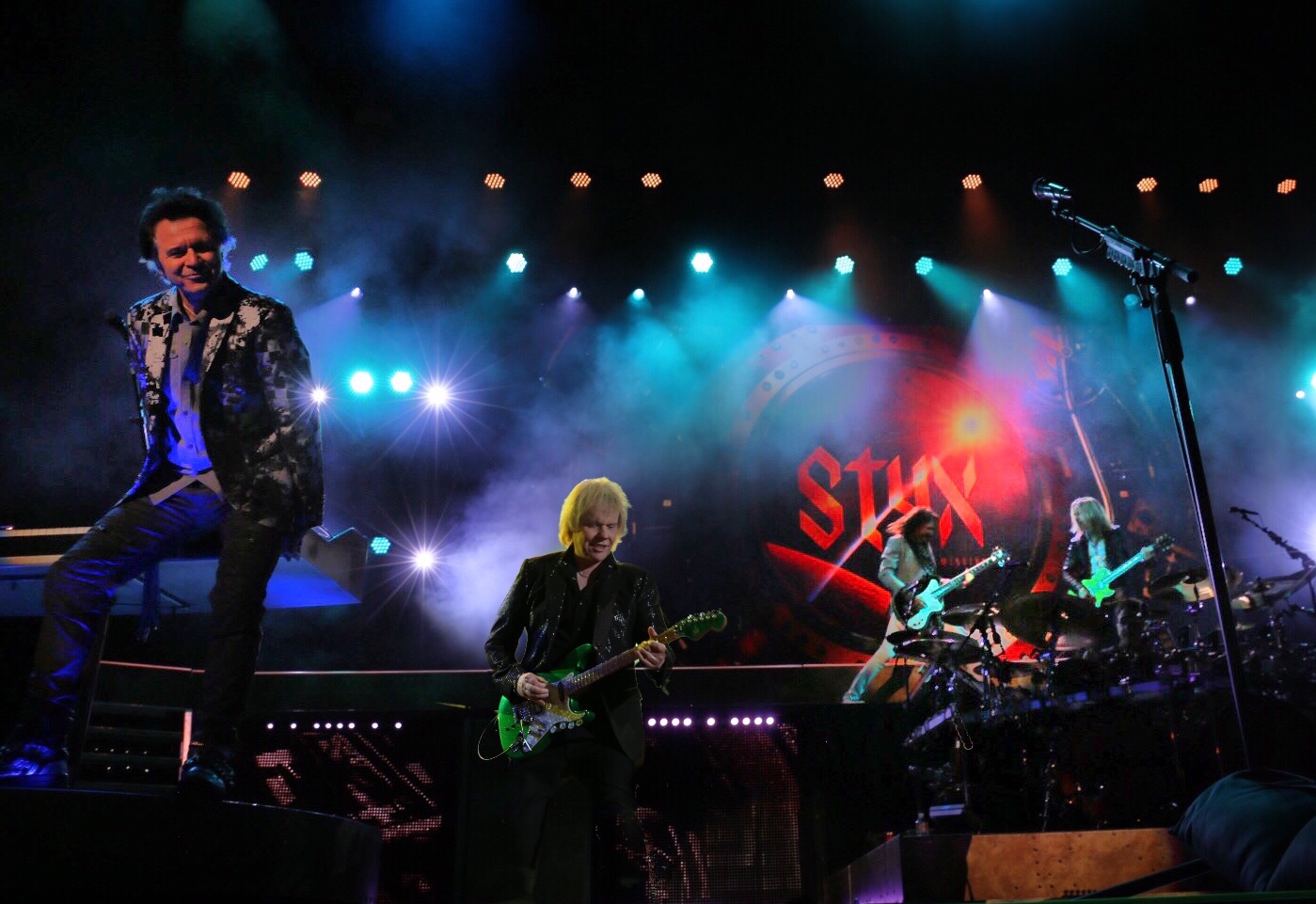 It was a hot June evening out at USANA Amphitheater. It definitely feels like summer here in Utah. It was the perfect evening for Volume 1 of Utah’s classic rock station, Arrow 103.5’s Arrowfest featuring Styx, Joan Jett & the Blackhearts, and Tesla. I love that feeling of being out at this amphitheater as the sun goes down. There’s almost always a breeze, and that feeling of the temperature going down while listening to live music.  It’s the best!

Tesla
The show started right at 7 o’clock with Tesla. I felt bad for the band because the temperature was still about 90 degrees when they took the stage. And the way USANA Amphitheater is positioned, the stage faces the west. So the sun sets right in the band’s faces! Those guys were getting cooked! I’ve got to hand it to them though, they seemed totally unphased. They performed their 8 song set with what I would imagine their same high level performance even if the sun was down. While much of the crowd was still filing into the venue, those who made it for Tesla were excited to see their performance which included hit songs “Signs” and “Love Song”. I met a couple seated in the row in front of me who had traveled from Great Falls Montana just to see Tesla. They traveled over ten hours to hear just eight songs from their favorite band. Now that’s dedication! They stayed for the entire concert, but they were emphatic that it was Tesla that they came to see.

Fortunately for the Blackhearts, the sun had all but set when they took the stage. It was especially great for them because they were in all black. I don’t know why I’m so concerned about the body temperature of these bands. I suppose it’s because I hate being overheated, so I figure they might not love it either. But they’re playing music for thousands of people. I’m sure they’re just fine.

Joan opened her set with guns blazing! She started with “Bad Reputation” then ripped into the Runaways classic, “Cherry Bomb”, then followed that with “Do You Wanna Touch Me (Oh Yeah)”.  It was a really cool start to her set. Unfortunately, during “Do You Wanna Touch Me (Oh Yeah), Joan Jett fell backward to the ground after she backed into a monitor. The band kept playing, while she encouraged the crowd to sing the “Yeah, Oh Yeah, Oh Yeah, Oh Yeah” part of the song to buy a little time to be given a new guitar and regroup for a second. I thought the band did a great job of vamping, and she recovered pretty quick. I was waiting for her to make a joke about it but she just said something like “Hey it’s Rock n Roll” and moved on. By the time the set was over, I had forgotten it even happened. Well, until now where I’m remembering to write about in this review.

Joan played some of her first Blackheart songs, as well as the Bruce Springsteen penned title track of a movie she co-starred in with Michael J. Fox called “Light of Day”.  The buddy, I went to the show with and I have determined that we must see this movie immediately. Let me know if you’ve seen it and where I can watch it. I never even knew it existed, and now my life has no purpose other than to see this hidden 80’s gem.

The main set finished with the same guns a blazing as the opening of the show, featuring mega-hit “I Love Rock ‘n’ Roll” followed by “Crimson & Clover” and “I Hate Myself for Loving You”. Then the Blackhearts did what would probably be considered their encore if they had time to leave the stage and come back by playing a medley of “Real Wild Child (Wild One) and “Everyday People”.

I always forget how many hit songs Joan Jett & the Blackhearts have. With famously putting her own twist on some covers, playing a couple of Runaways songs, and of course her big Blackhearts singles, it makes for a great block of music. I really enjoyed them. 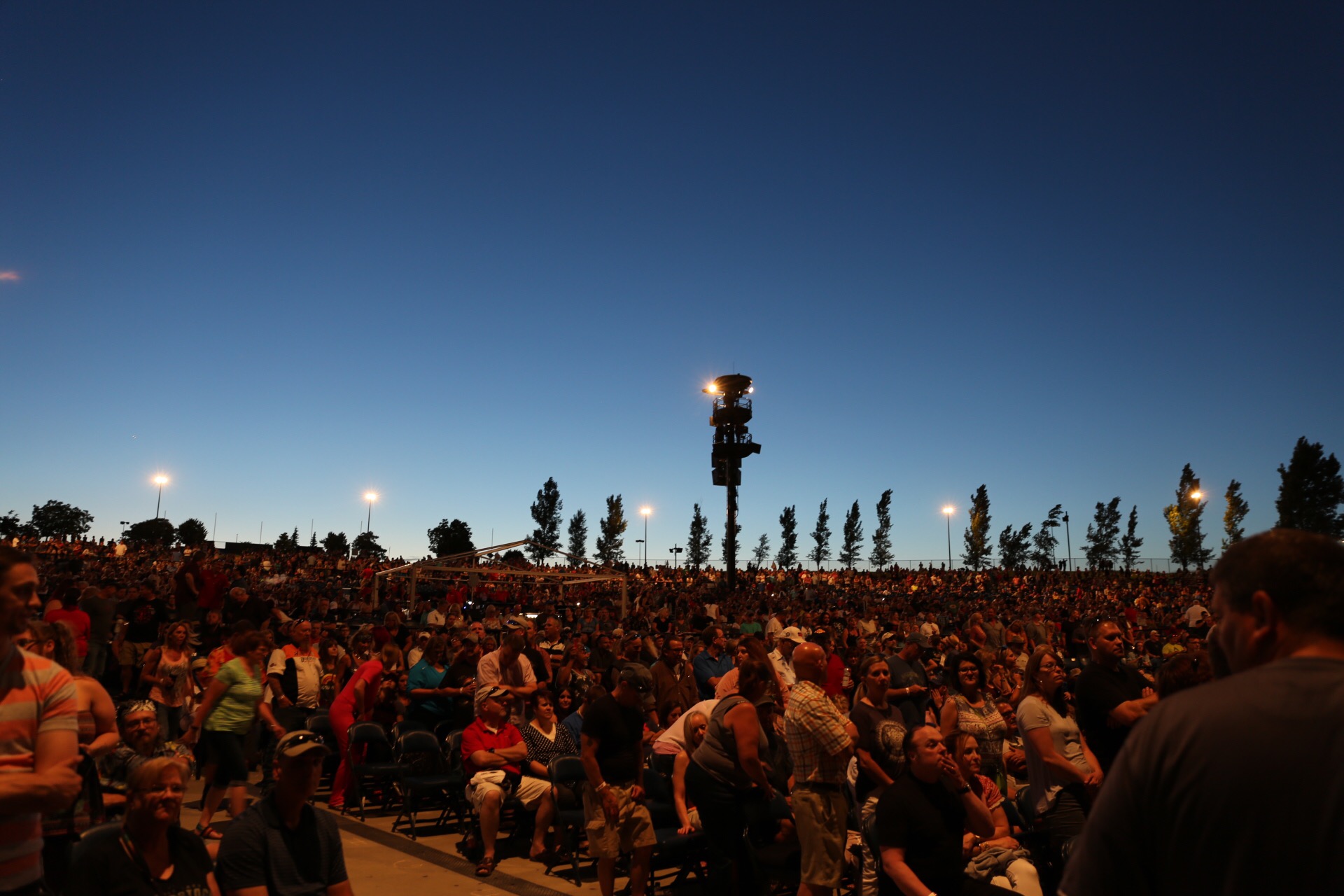 I’m sure I’ve said this a bunch of times but I’m always impressed with how quickly they move one band’s equipment out and the next band’s in. I was given a photo pass for the Styx set so I was up close as the transition took place and it’s an art form. I don’t think we waited twenty minutes after Joan Jett for Styx to be ready. I don’t know how they do it. But I know I’ve taken for granted just how quickly the switch happens. 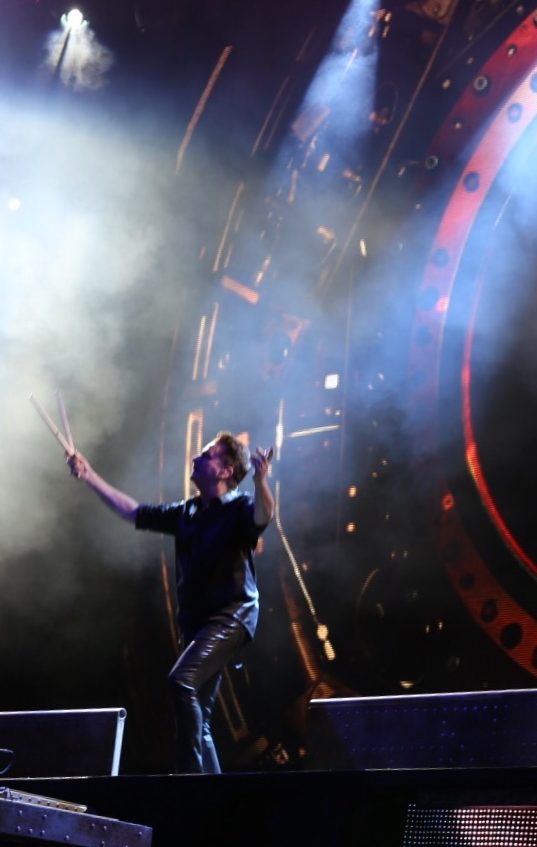 I had the opportunity to see Styx at the Eccles Theater back in January.  They performed alone with no openers and no co-headliners.  Just them.  It was a good concert.  I was excited to see if any surprises were in store for us at USANA Amphitheater.  And was there ever a surprise!

At the beginning of the show, I was set up between the barricade and the stage.  So basically in front of the front row for the first three songs. Let me tell you, it’s a pretty awesome sight. There were moments where I had to remind myself to keep taking pictures because I was just captivated by the well-oiled machine that is Styx.  They give each other these looks where they’re communicating more than we realize. Maybe they’re telling each other “This is a great crowd!”, or perhaps, “This crowd sucks, we need to put some extra work in to get them going!” or maybe, “We sound amazing tonight!”.   Who knows what they’re saying, but they seem so in sync that they don’t need to talk. 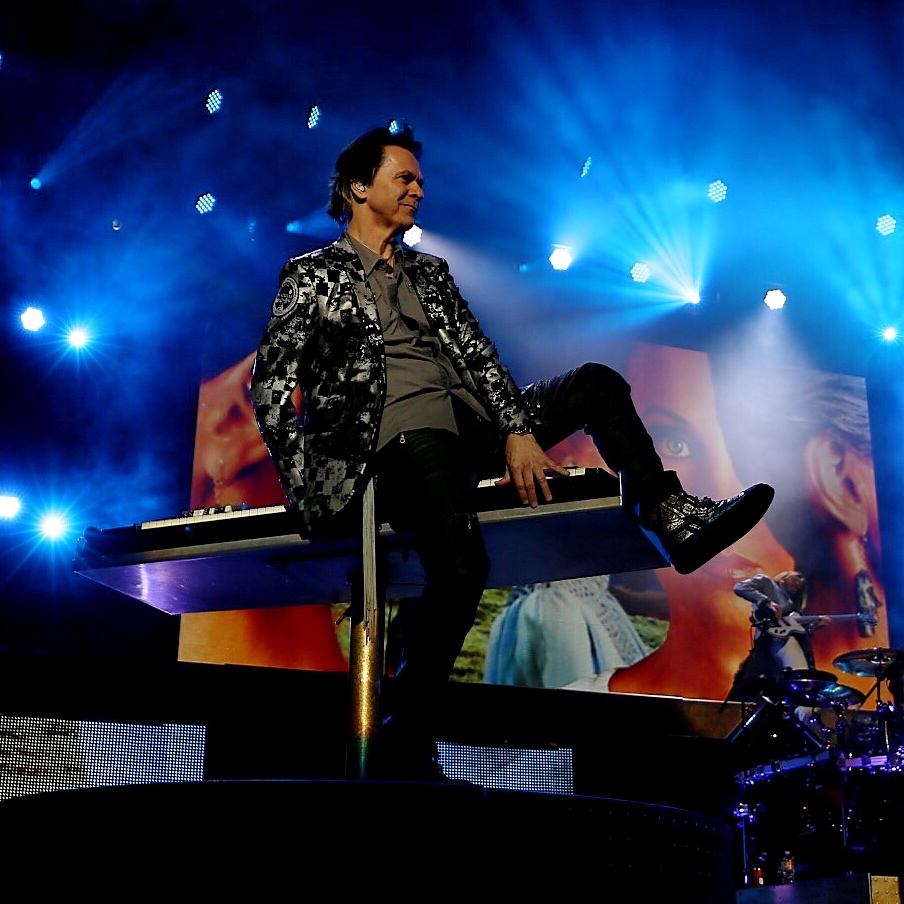 Speaking of the crowd, I’m not sure if it was the heat or that fact that it was a Monday, but they weren’t as energetic as I had expected them to be. That’s not to say they weren’t into it, and it could have been just my section, but it took a few songs before the crowd was fully into the show.

Styx is promoting their first album in over 14 years called The Mission.  It’s a pretty good album. The fear for fans is that the set will be over saturated with new songs when what they really came for are the hits. I thought Styx did an excellent job picking just the right spots to drop a new song into the setlist. They opened with “Gone Gone Gone” from The Mission. I’ve always felt that the first song is the perfect place to play a song off of the new album because the crowd is just excited the band is on stage. By the time they realize it’s a new song, it’s half over. After playing a new cut, Styx rewarded the audience with seven hit songs in a row. That’s how you do it. I think if other bands understood this, their fans would be more open-minded about hearing newer material. 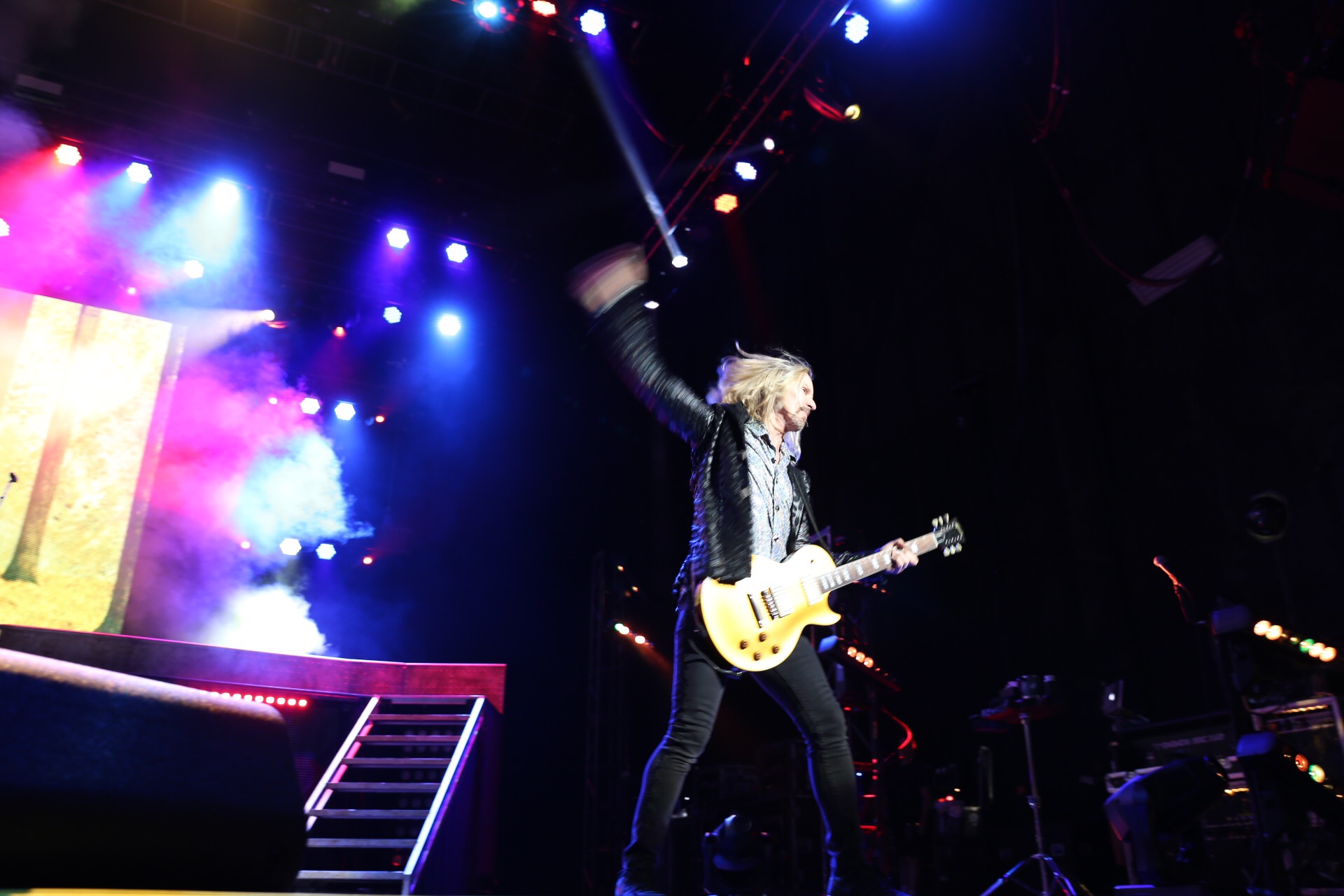 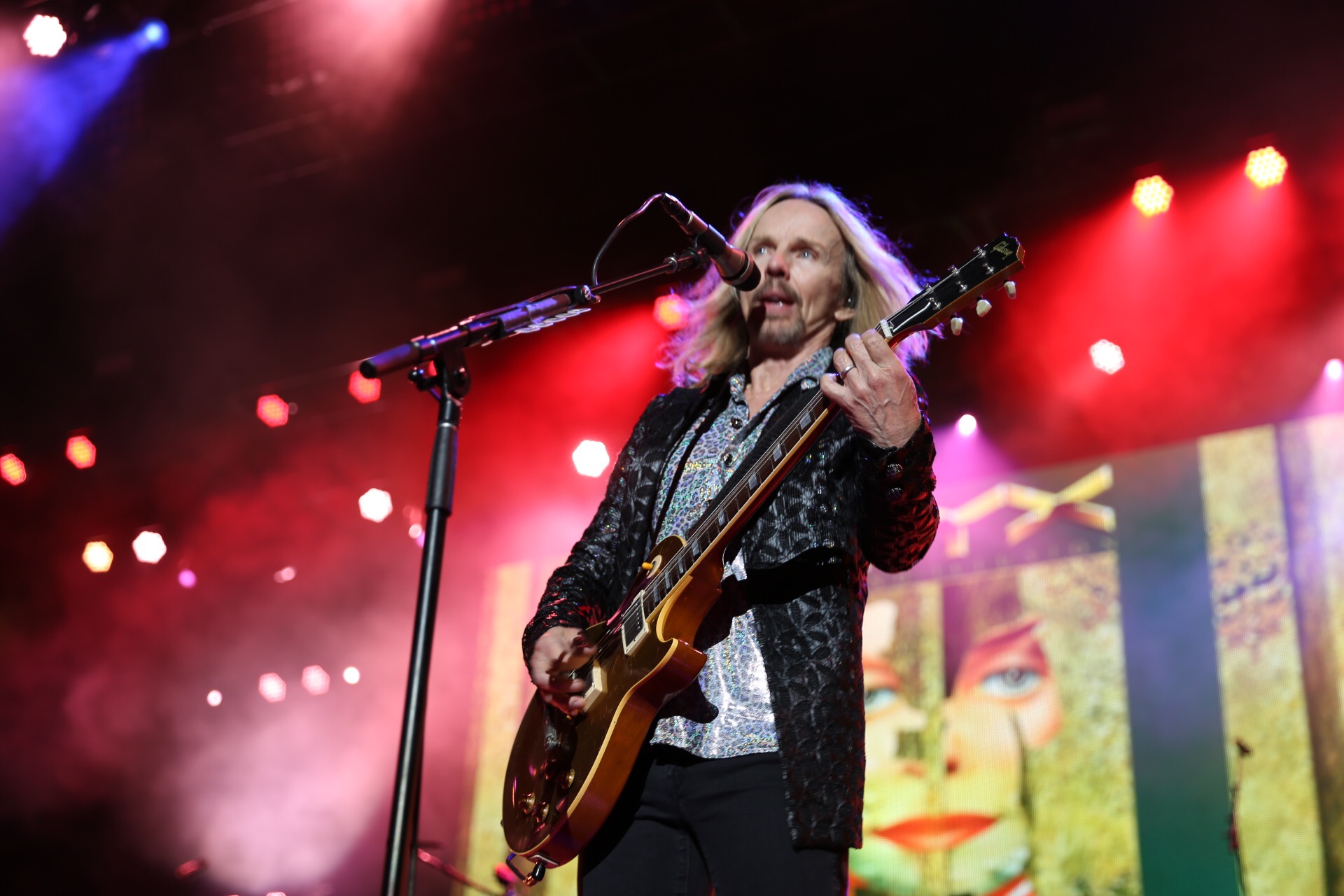 Tommy Shaw was in his usual great form. I don’t know how he’s continued to sing those high notes over the years. He sounds as good as he did when he first joined the band. JY who they now call the “Godfather” of Styx seems to really be enjoying himself up on that stage.

The member of Styx that has impressed me since the day he took over for late drummer John Panozzo is Todd Sucherman. I think he is one of the best drummers out there today. He really is underappreciated in the rock world. 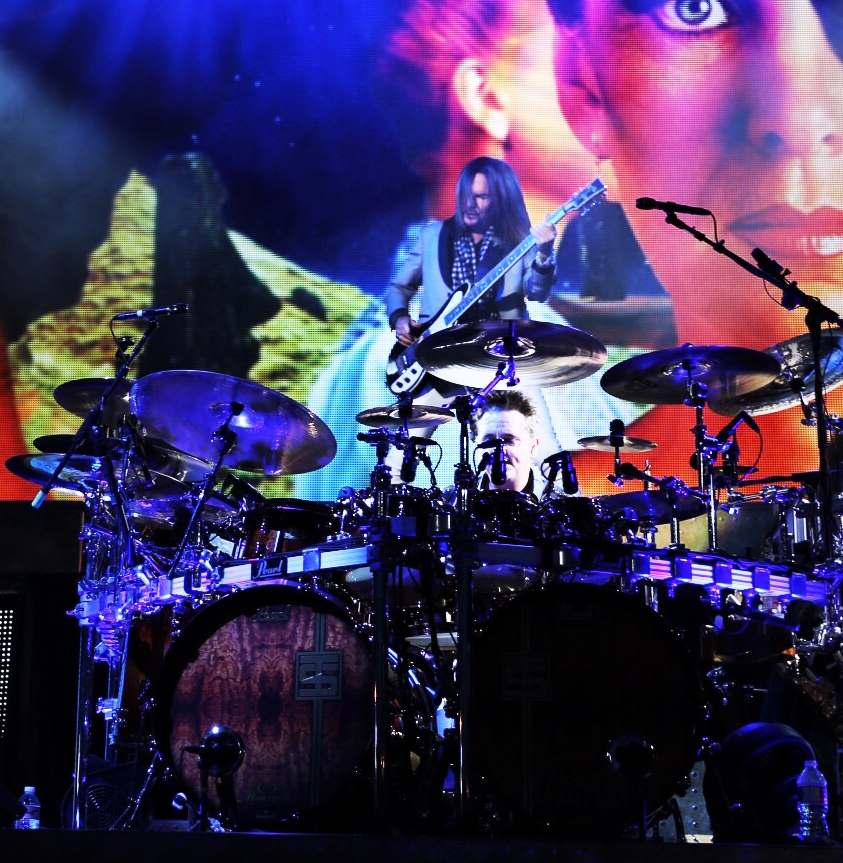 Of course, it’s always great to see original bassist Chuck Panozzo take the stage for a few songs. It seems like him and current bassist Ricky Phillips have fun when they perform together.

Styx played all the hits you’d expect to hear if you’re going to a Styx concert. You know, “Blue Collar Man”, “The Grand Illusion”, “Fooling Yourself”, “Too Much Time on My Hands”, “Renegade”, “Lady”, “Come Sail Away”, and “Mr. Roboto”. Ok, maybe that last song isn’t one you’d expect to hear at a Styx concert. But if you’re rubbing your eyes to make sure you read that right, let me assure you, you did. Dennis Deyoung-less Styx sang “Mr. Roboto”. 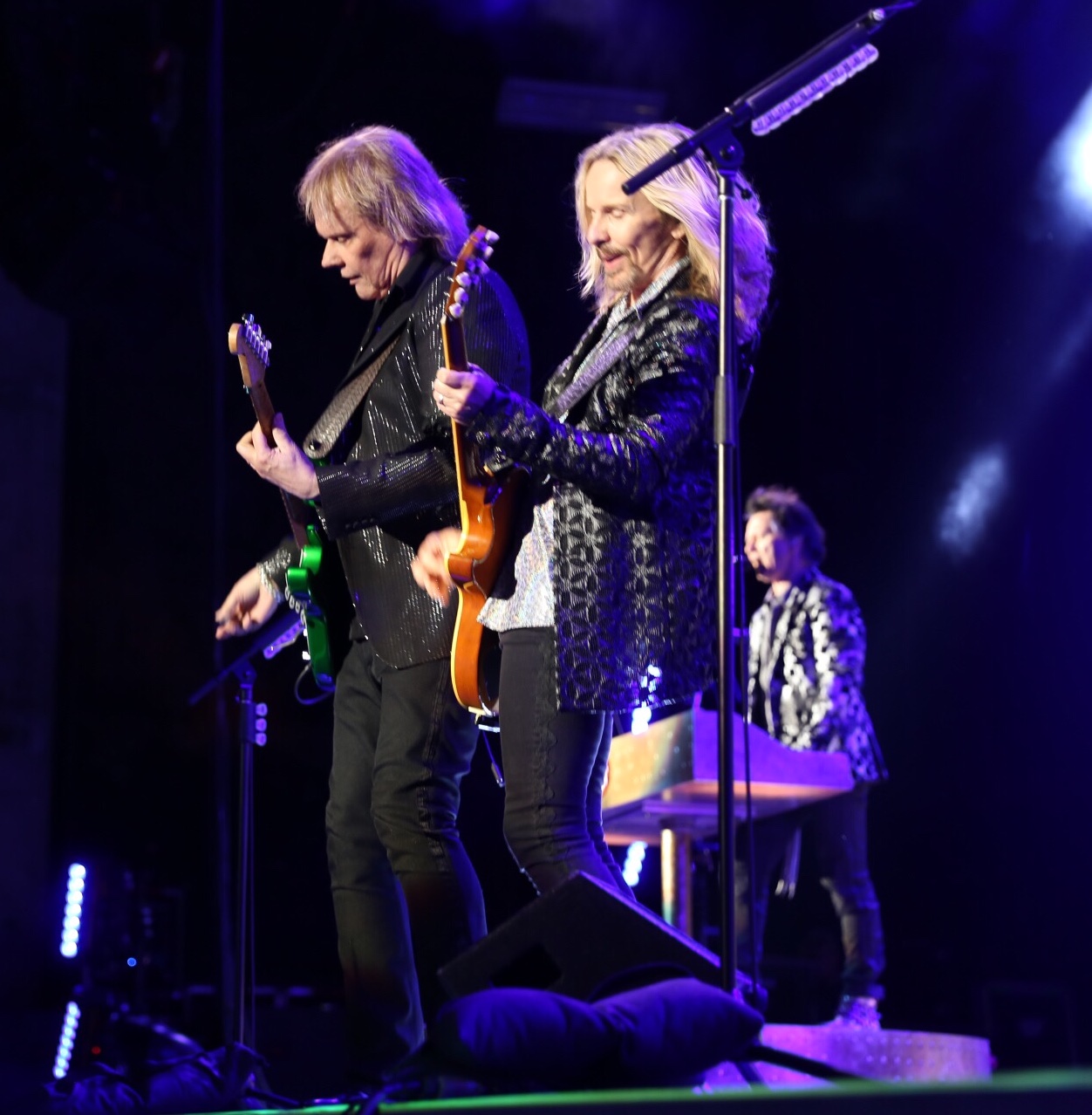 Now even up to the time of writing this, I still don’t know how I feel about it. I have this one side of me that can’t figure out why they would do it when they’ve made it known for years how much they (Tommy Shaw and James “JY” Young in particular) don’t like that song and have tried to distance themselves from it. Maybe I’m a little defensive for Dennis Deyoung and feel like, hey, this is the song that is attributed to breaking up the band and giving him the boot, how can you play this now without him? There is also a side of me that wonders if the fellas have simply evolved over the years to the point that they tolerate, maybe even appreciate the song now. And maybe performing it is a way of saying “Look, we know we haven’t done this song in a billion years, we don’t hate it anymore, and we love our fans so here you go.” And maybe it was some kind of an olive branch to Dennis Deyoung. Not necessarily to reunite, but to say, it’s water under the bridge.  So yeah, I don’t know how I felt about having heard that song. I’m not sure if Styx is sure about how they feel playing that song.

As I looked around the amphitheater, I think there were many in as much shock as I was. The initial response I noticed was people with open mouths, and looking at each other totally surprised. I can say this. Lawrence Gowan did an amazing job on the vocals. He sounded really good singing “Mr. Roboto”. I really wish I would have known that they were going to do this song when I interviewed him a few weeks ago. I would have at least wanted to know who proposed the idea, if anyone fought it, and why they ultimately decided to go through with putting it on the setlist. I’m so curious about it. I did enjoy the shock of it all. Unless you cheated and looked at a previous setlist, there is no way you saw that coming.  Way to keep us on our toes Styx! 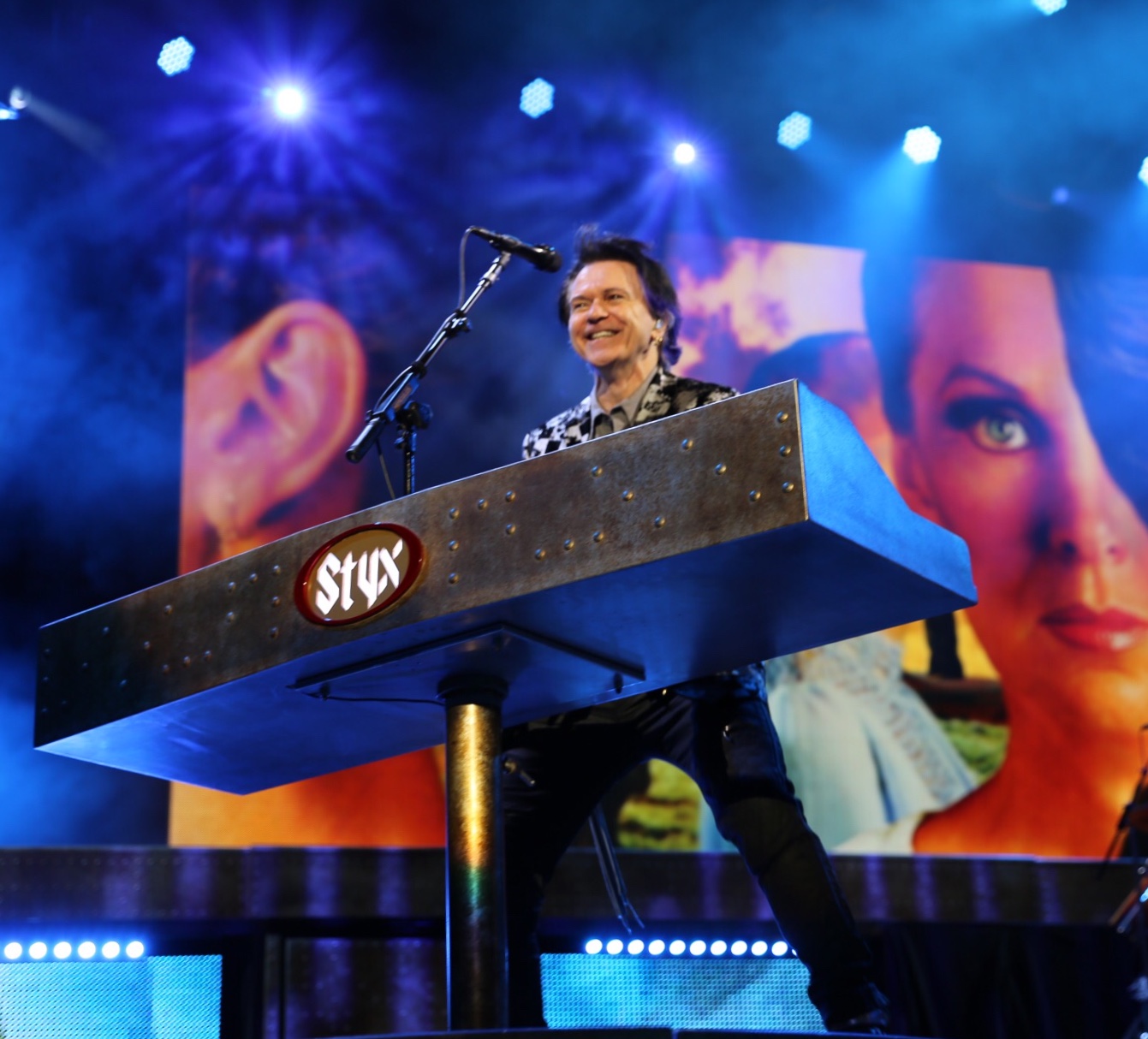 All in all, it was a beautiful night. The weather was perfect, the bands were fantastic, and the music was alive. Well done Arrow 103.5. Can’t wait for Volume 2 of Arrowfest.