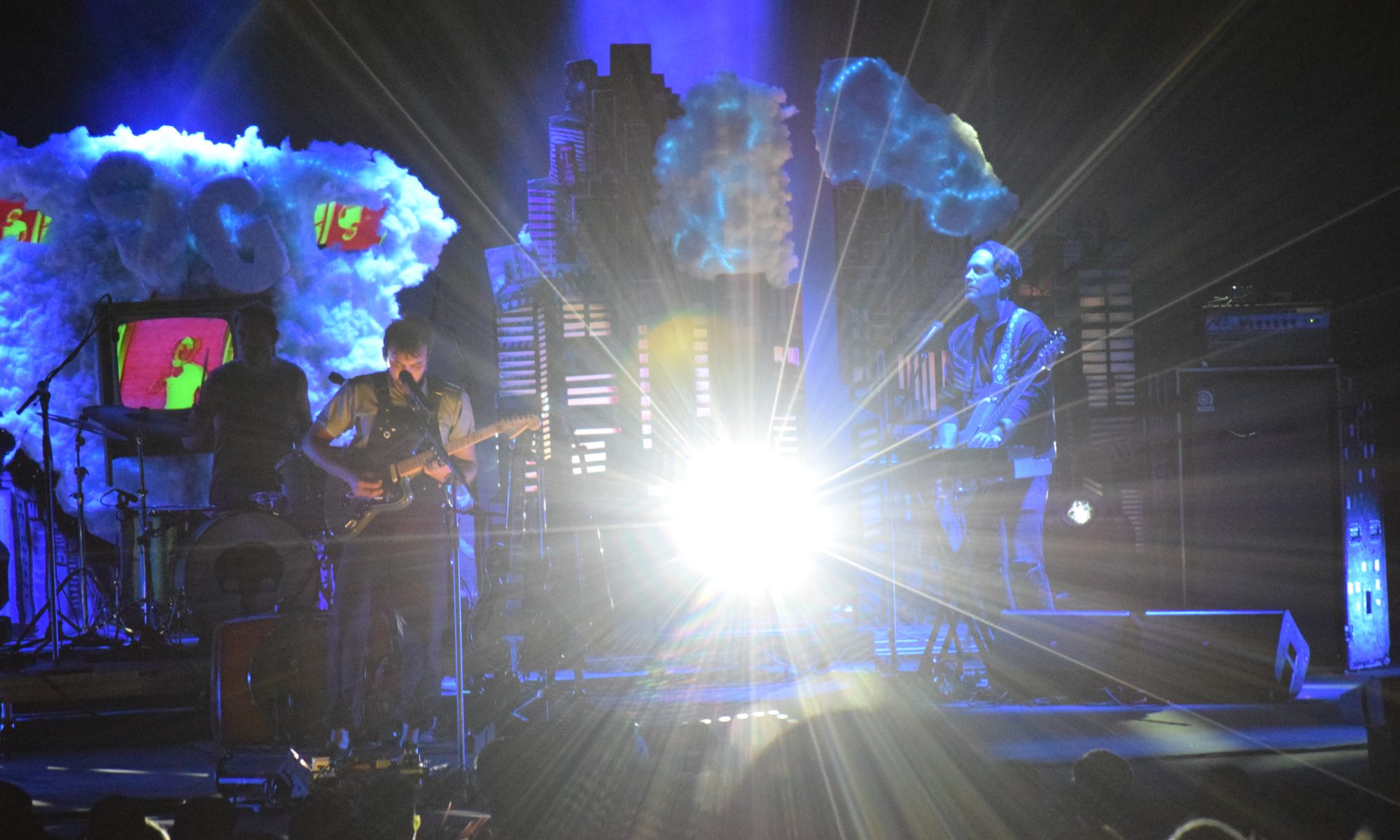 Southern Gothic is one of my favorite literary genres. I’d argue that certain musicians fit into this genre as well, Shakey Graves among them. Never mind his playfully macabre alias, the themes of his songs touch on death and decay, murder, alcoholism, drug abuse, execution by electric chair, and the way ex-lovers haunt one another. All this, though, is presented with good humor and a (wholesomely) wicked Texas grin, side-by-side with themes of shirking the predictable life and embracing the shiftless, devil-may-care habits of a tramp. Shakey’s musical style is tricky to pin down. Clearly influenced by bluegrass, hobo folk, blues, rock, and country, it might be safest to simply say, “Americana.”

Sharp and lighthearted with a thrift-shop aesthetic and buried sarcasm, Caroline Rose warmed up the crowd with her delightfully spastic bubblegum-rock sound that clashed with her cloudy lyrics. “Jeannie Becomes a Mom” was a highlight. Next, Dr. Dog played through moonrise. Like rustic beach bums, they played and sang loose-limbed and laid-back with steel bends and the occasional harmonica. Audience members swayed and mumbled along. (I would like to point out that a full sixth of the audience was barefoot.)

By the time Alejandro Rose-Garcia (the ludicrously talented Shakey Graves) appeared, the moon was high and the atmosphere perfect. He started his set like he started his career, a one-man band alone on the stage. He opened with “Donor Blues,” stating, “This is a song about the story of my life which is traveling to places like this, thus becoming more whole with every withering step I take.” He then played the calmly tragic “Proper Fence.” For “Word of Mouth,” Shakey used his famed, modified suitcase that functions as both a kick drum and a tambourine stand to back his own vocals and guitar work. After the lyric, “If you value your job, stay out of crime,” he froze comically with his hands up before continuing the song.

Shakey wakens my inner hillbilly. His original work is so good, it sounds like it’s been around a hundred years, enduring the way the best folk songs do. I prefer his music live and ad-libbed, filled with improvisations, comical asides, and fluctuating volume. He is a master manipulator of tempo, slowing down before pausing at just the right time, making you crave the pickup that is sure to come and when it does, it hits the sweet spot with a dopamine surge. This aptitude is readily apparent during his live performances of two of my favorites: “Roll the Bones” and “Late July.”

During “Roll the Bones,” he let the music drag on the lyrics, “Oh, so it seems,” and lingered at an easy pace before gradually picking up to a rapid clip and another tempo shift at the end. Shakey invited his band (Jon, Boo, and Pat) on stage for “Cops and Robbers,” a song dedicated to a shady Australian driver the band hired while touring there. Alejandro’s stage setting was his own design, built in his backyard; he spent seven hours wiring the stage himself prior to his performance. The scene was a nighttime cityscape with billowy, cottony, cloud-like objects cushioning three televisions. The screens held pink-and-green static of wavering, indecipherable shapes. The fluffy backdrop seemed to glow in the soft lighting (blue, purple, turquoise, etc.).

The slow-burning “Family and Genus” built eerily to Shakey’s haunting, echoing howls. After “Dearly Departed,” his bandmates left Shakey alone on stage to showcase his brand new piece, “Not Everything Grows.” “Mansion Door” made use of smoky purple lighting that flashed red and yellow on the lyrics, “fire burning.” Shakey ended the evening with “Late July,” flavored like an Appalachian murder ballad.