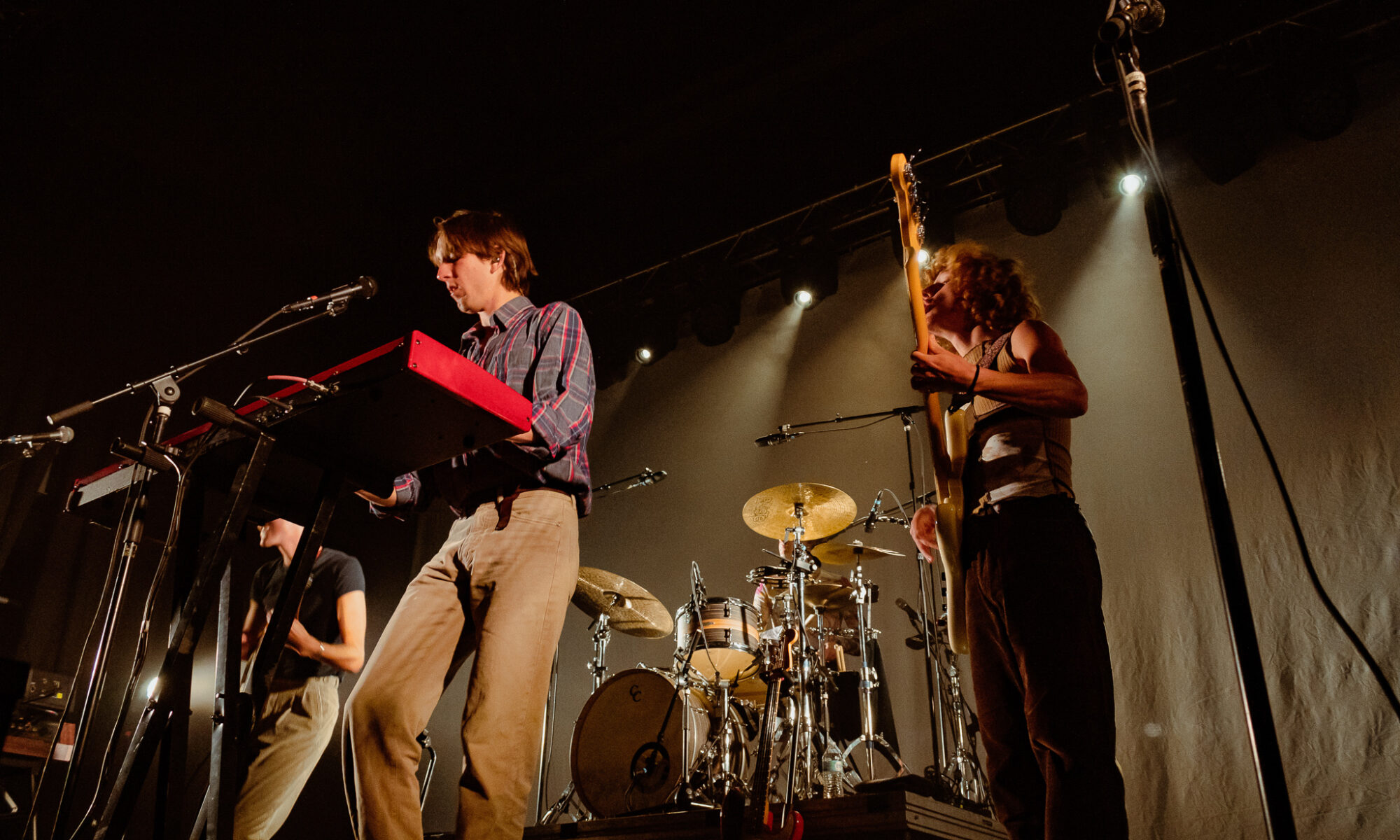 When Australian-born, Berlin-based band, Parcels, flew over, “a little town among mountains,” on a flight from Berlin to Los Angeles a few months ago, they only knew that it was Salt Lake City after looking at a map on their seatback screens. Then, they excitedly realized that they would be playing there! The night came, and Parcels and Mildlife’s show made for a sold-out, groovy night at The Depot on March 10, 2022.

I arrived at the venue about 15 minutes before the show, and the first thing I noticed was how friendly those in attendance were.  Smiles were being shared, which I feel like is a rarer situation after almost two years of mask wearing. Many people wished me luck as they saw me pass by with my camera bag, and that’s never happened before! While waiting for the show to start, the crowd continued to eagerly fill in. A security guard said that people started lining around 4 pm earlier that day to get let into The Depot for the show. The venue was filled on the lower pit level, as well as the second level that looked down on the stage!

The opener, Mildlife, described as a psychedelic jazz band.  Mildlife is made up of Tomas Shanahan, Kevin McDowell, Jim Rindfleish, and Adam Halliwell from Melbourne, Australia.  They took the stage, and the lights came one and shone a tranquil blue and pink that were synced to the music. Their first song had no lyrics, but I didn’t even notice until the song was over! It carried a great beat and captured the attention of the crowd. When the second song began, they started to incorporate more lyrics part way through the song. As the song went on, the audience began to dance along to the beat!

I noticed that with the next song, Mildlife layered on even more lyrics. It fascinated me how they built upon the first song that didn’t have any lyrics and progressed to a song filled with lyrics. The band was in sync with each other for the entire performance. Their sound was soft and clear, and their music was very catchy. I found myself thinking that I could easily listen to their music all day because it was very relaxing and peaceful. Their vibe fits perfectly with their name! I was impressed by their musicality and so was the crowd! They went wild any time band member, Adam Halliwell, picked up and played the flute before returning to playing the guitar. That’s not something you’d see at just any show! Mildlife was well received and was a great way to kick off the night’s events!

In between sets, even more people flooded in, and while The Depot seemed filled before, it quickly became packed! Security guards came out with a cart containing water and dozens of cups. They dispersed the cups amongst the crowd, to whoever wanted them! The audience was thrilled! I mentioned to the security guards that I thought that it was a great idea, and they agreed. They said that they passed out water to help prevent medical issues like becoming faint or passing out. This is something that I have now seen for a second time, and it seems to be effective! After the empty cups were gathered, the anticipation began to grow for Parcels!

Louie Swain, Patrick Hetherington, Anatole Serrest, Noah Hill, and Jules Crommelin of Parcels took the stage just after 9 pm. The stage glowed completely blue as the band stood preparing for the show to begin. The lights came up and the show was on! They favored the crowd with “Lightenup,” and an immediate energy was brought into The Depot. You could tell that the band was having the time of their lives, and so was the audience! Parcels moved about the stage and interacted with each other in fun and different ways.

The biggest crowd reaction to their interactions seemed to be when most if not all of the band would hop up on the drum stand and just play their music. It was kind of like they were in their own little bubble for just a moment, and it was pretty cool! Their lighting played a huge role in the general feel of the show. It evoked emotion in a way that I didn’t realize stage lighting could! There would be dark blue lights, red lights, solid white, and flashes of gold and white. When I was watching the show from front of house later on in the night, I even noticed that the way the lighting was set up made the band’s shadows bounce back and forth behind them. That was very unique!

Applause broke out after, “Theworstthing,” and the crowd was so enthusiastic. The band just took a moment to soak it in. When the audience died down, Jules said, “We’re in Salt Lake City!… It’s cold here! How do you guys do it?” He mentioned that it’d probably be good to have a warm coat, and he continued, “It’s pretty though! It’s a beautiful city! I guess [the cold] is worth it!”

For most of the show, Parcels’ songs flowed seamlessly together, making the night one endless dance party! When I say that everyone in the venue was moving, I mean it! As I scanned the room, I noticed that there was the central pit group dancing in sync, people to the sides of the crowd dancing their hearts out in whatever way they pleased, and even those sitting down were dancing in their seats! The vibe was so groovy it would be hard to stay still. While people were dancing all night long, everyone really cut loose for, “Tieduprightnow!”

Each song was packed with emotion. Whether it be happy or sad, or anything in between, they portrayed every song in a way that was so convincing for any message they were relaying. Towards the end of the night, they sang some lovely, almost angelic harmonies that left me in awe. They were able to transition so well from upbeat to slow paced and back again!

It was a unique experience in an atmosphere that was genuinely full of energy while feeling comforting and relaxing at the same time! Parcels and Midlife’s show provided a night of great music, dancing, and fun for those in attendance!