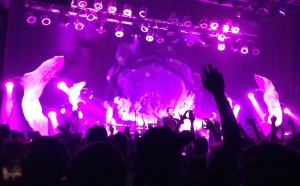 I was offered a ticket last minute to see The Naked and Famous last night, and I’m so glad I was able to go. What a fun band. I’m a huge fan of synthpop, so this show was right up my alley.

I think it must be so interesting for a band from far away, in this case New Zealand, to come all the way to our small rocky mountain city to find a high energy fan base such as this. The Depot was sold out, the fans were dancing, singing and jumping the entire show, and it was obvious that the band was loving it. They made several comments as to how lively the crowd was.

The interesting thing about The Depot, is while it’s a great venue as far as the sound, visibility, and size, sometimes it seems fans will treat the place like it’s the local pub, and the band is just some local act. It has always amazed me when people act like this. Well not tonight. Sure, people had their drinks, and conversed at the bar, but not for too long. Most of the people I observed were anxious to get back to the show. And I can’t blame them. The music was fantastic, and the vocals were perfect.

The Naked and Famous aren’t the type of band to dance around, and interact with the fans too much. But their music speaks for itself. Personally I don’t know how they’re not dancing the whole time. I couldn’t stand still at one of their shows, even if I had a broken leg. The nice thing about the band is they picked their spots when to really get into it. And the crowd always followed along.

As was expected, the final song of the night was the hit Young Blood. For me, seeing a band that is on the rise, with maybe one or two big hits, as opposed to seeing a hit machine like The Eagles or U2, has a certain appeal. While I love seeing bands with a ton of hits, there is a certain exciting anticipation when waiting for those two or three big songs. And that was definitely the case with this show. When Young Blood began, there was an excitement level from the crowd that had not yet been present. It was almost like a release from the almost 90 minutes worth of anticipating when we were going to hear it. And I gotta admit, it was worth the wait. It really is a great song. The Naked and Famous have played that song so many times! And they will have to play it in so many shows to come. But even they seemed to love the moment. How could they not.

All in all, it was a fun night. And while I personally felt like I was chaperoning the concert due to the youth of the crowd, it was still a great show, and I’ll be sure to see them again.

Encore:
The Mess
To Move With Purpose
Young Blood