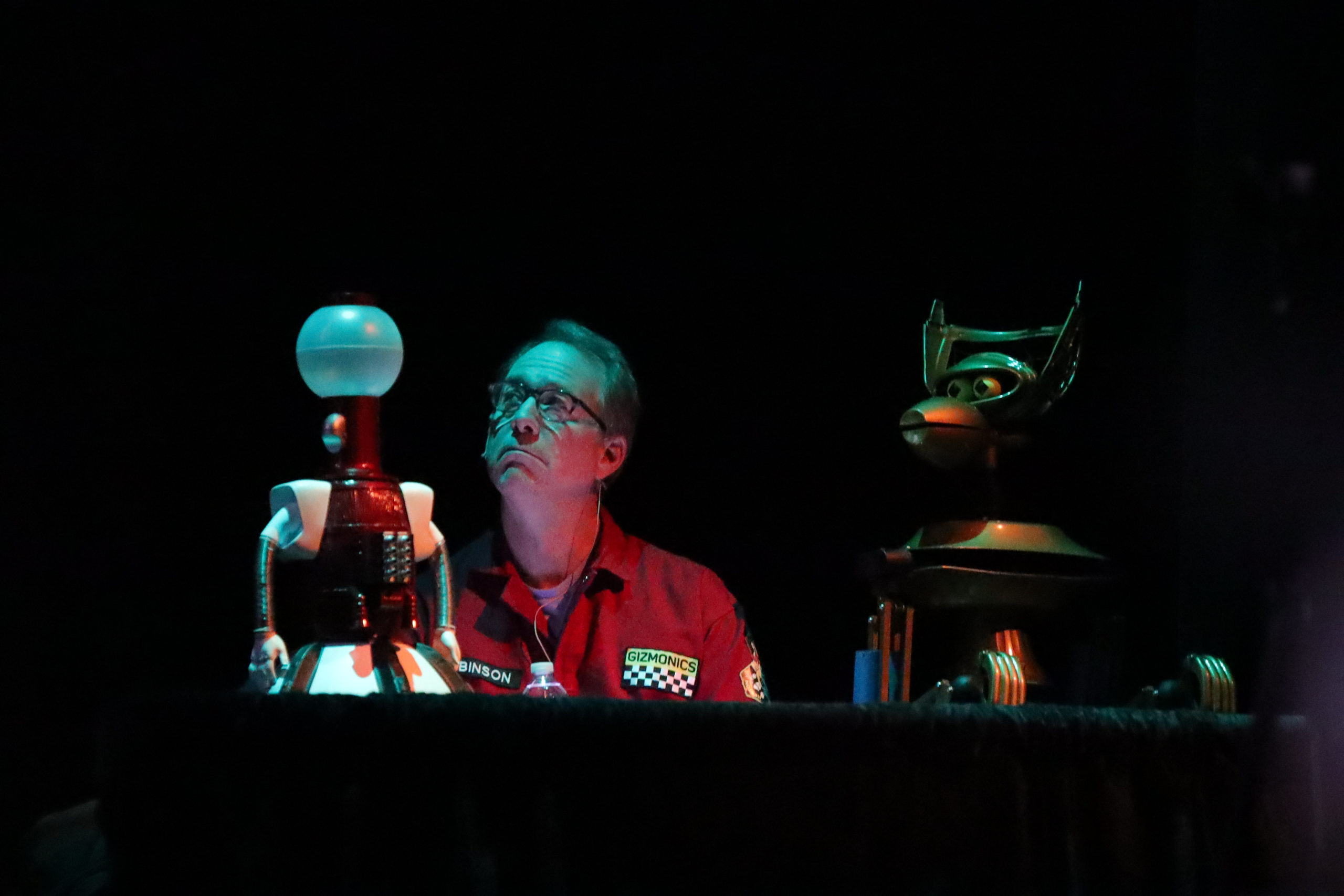 I was anticipating a plethora of hardhats and jumpsuits and I was not disappointed in the slightest. The Eccles Theater was a sight for squinted eyes and a beacon for heckling voices as the grand vestibule was filling with nerds from every culture and subculture: movie nerds, Sci-fi nerds, Trekkies, Thespians and so many more, of all ages.

The world was an ever dark place in 1999 when Joel Hodgson left and ended Mystery Science Theater 3000 (MST3K); a void within the child of the entertainment industry. MST3K acts are one of the only full length movies I notice utter silence among the audience, Yet these characters from Mr. Hodgson’s mind have become friends and heroes to all of us in the audience; at home or the theater.

Such a venue for the return of our rambunctious puppet friends was so fitting I could hardly believe this was real. I had grown up watching Tom Servo and his golden voice and Crow simply doing his best to aggravate everyone. If any format of entertainment is sorely needed in our current day and age, it is this one. Tom Servo and Crow T. Robot say all of the things we wish we could yell out at the insanity played out before us. And the feature they chose for The Great Cheesy Movie Circus was anything but glorious in a way that was, well, glorious! ‘No Retreat, No Surrender,’ was the film our finely polished and scaled puppet friends had chosen for Salt Lake City through our outrageous night watching ‘The Great Cheesy Movie Circus.’

I must say this; before we dive into the depravity that is this movie and also the hilarity of our companions: I have never been more fascinated by an era of history like I am with the 1980s, in a way that makes me feel, ever so grateful, yet equally thankful for not having lived through it. This movie is immortal proof of these feelings and MST3K solidified that feeling within every member of the audience.

A sure fire attempt in tapping some of the karate fad embedded within the 1980s, clearly emulating The Karate Kid and accidentally creating something unique and truly wonderful. Thank you, Corey Yuen, and thank you, Jean Claude Van Damme, we are forever in your debt.

To be honest, I was kind of nervous, more intrigued as to how MST3K was going to accomplish a live performance. Usually, the trio is watching a movie in its entirety while endlessly heckling anyone and everything in sight, not to mention the original breaks and skits or stunts built into the show. I think back on watching ‘Invaders from the Deep’ episode with my parents and it was the complete package in entertainment. The last hurrah for our beloved Joel is, of course, centered around a circus. Gypsy is our lovely and headstrong “beast.” While Tom Servo controlled the stage with his Campbell’s soup can size body, yet titan-sized voice. Then, here comes our beloved proactive antagonist, the one and only Crow T. Robot. Tonight he is our safety marshal, doing his best to stir the pot. There were four breaks in the show where the familiar intergalactic, operator-assisted friends, attempted some daring circus-inspired feats, for puppets anyway. I was caught off guard, I knew the night would be an absolute gas, but nothing prepared me for the earthquake of belly laughs and guffaws I emitted all night, directly into the back of the gentleman’s head one row ahead.

I am so happy I had the opportunity to see this incredible cast. Joel, of course, is an amalgam of talent and skill; a combo that shaped many important aspects of contemporary comedy as well as Comedy Central itself. He was electric and welcoming in a way that made the show feel like MST3K never missed a beat. The star and future of MST3K is Emily Marsh. She plays the likable, quirky and essential Crenshaw in the show as well as operating all four puppets. In no subtle way, the torch is being handed to Emily to continue MTS3K and take it to new heights by Joel himself. Yvonne Freese and the ever-talented Nate Begle, Crow T. Robot were hilarious, witty, original and poignant. MST3K Live is a must-see and a must-watch, as we enter a new decade anything could happen.

In 2017, with the help of one record-breaking Kickstarter page, a passion of an amazing cast and creator; MST3K was brought back into the spotlight, to once again riff those that lived in the spotlight. Reception for the Netflix show was prolific; I do not recall such a revival of any kind to be met with such clamor and joy. Crow T. Robot, Gypsy and Tom Servo were sorely missed and now finally, we all have had the opportunity to meet them. We all had the time to laugh with them, laugh with Joel and Emily and Nate, discovering creators of a television show actually being as genuinely funny and warm as you always hoped they would be, if not, more so.