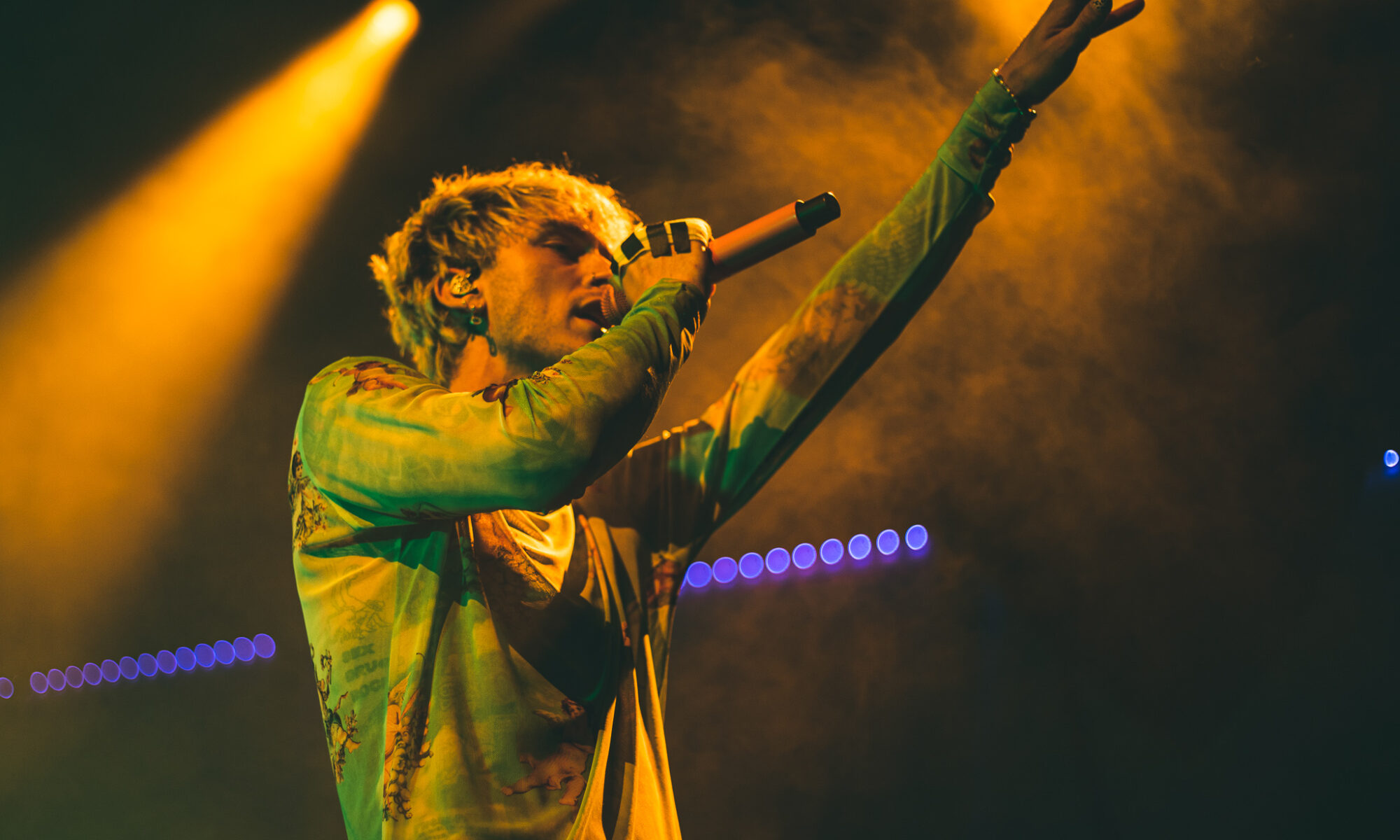 Machine Gun Kelly Tickets to My Downfall Tour 2021- The Complex

People began lining up around 6 am. An hour before doors opened, fans were lined up down the block. This wasn’t just any artist coming to town. A true rockstar was going to be in town, Machine Gun Kelly. The show sold out within minutes of tickets going on sale. The Complex set up the scarcely used outdoor stage to accommodate the large crowd.

People quickly filled in up to the rail and there were giggles and excitement for opener JXDN. The young heartthrob singer who has a massive fanbase came out on stage to tons of screams and performed his track, “Pills”. The set was pretty short so he came out with energy right off the bat! His punk-pop songs have super catchy lyrics and everyone in the crowd was jamming out and singing along.

JXDN’s rocking performance was matched by his awesome drummer and guitarist. You could tell the 2 musicians really fed off the energy of their singer and we’re often really getting into the hard parts. JXDN finished his set off with his big hit “Angels and Demons” and it was the perfect song to get everyone ready for Machine Gun Kelly!

Once production was set up, MGK was rolled on stage in a giant pill bottle set piece. He climbed up a ladder inside and came out on top with his famous pink guitar singing “Title Track”. The entire massive crowd knew every word. He went through many of the songs from his chart smashing album Tickets to my Downfall including “Kiss Kiss” and my personal favorite track “Drunk Face”. During his performance, he would often grab crowd members and bring them on stage. A little girl had a sign that said “Coleson can I come on stage?” He brought her up and comforted the nervous little girl and as he began rocking out to his new song she started dancing around and singing along it was super cute.

This album was number one for so long, so there weren’t many songs that everyone didn’t know. Machine Gun Kelly is just the true epitome of a rockstar. MGK’s stage presence was absolutely unreal and he sounded so good live. After an awesome cover of Paramore’s “Misery Business” that had every 90s kid headbanging, Rook, MGKs drummer, did one of the coolest drum solos I’ve ever seen. While MGK and the rest of the band took a quick intermission, Rook had the entire crowd rocking!

After awesome performances of “Papercuts” and “My Ex’s Best Friend” MGK took everybody back to his rap days with “El Diablo” and “Wild Boy”. It’s pretty cool to see such a blend of rock n roll, punk, and hip hop by the same artist. Coleson didn’t end the show without a bang, the last 4 songs became absolute rager of a finale. He brought a random girl from the front row up to perform Halsey’s part of the rock and roll duet “Forget me Too” and turns out she was a singer in a band and absolutely crushed it! She was so good and got an enormous applause!

MGK closed out with the punk anthem “Hangover Cure” the sweet play on words on “Jawbreaker”, and finally closing with “Bloody Valentine”. In the final chorus of “Bloody Valentine” the band went absolutely bonkers! It was the crescendo of the whole show. Fire canons were synced up with the guitars and a wall of sparks rained down behind Rook the drummer. It was an epic ending to an epic rock concert. Machine Gun Kelly you rock!