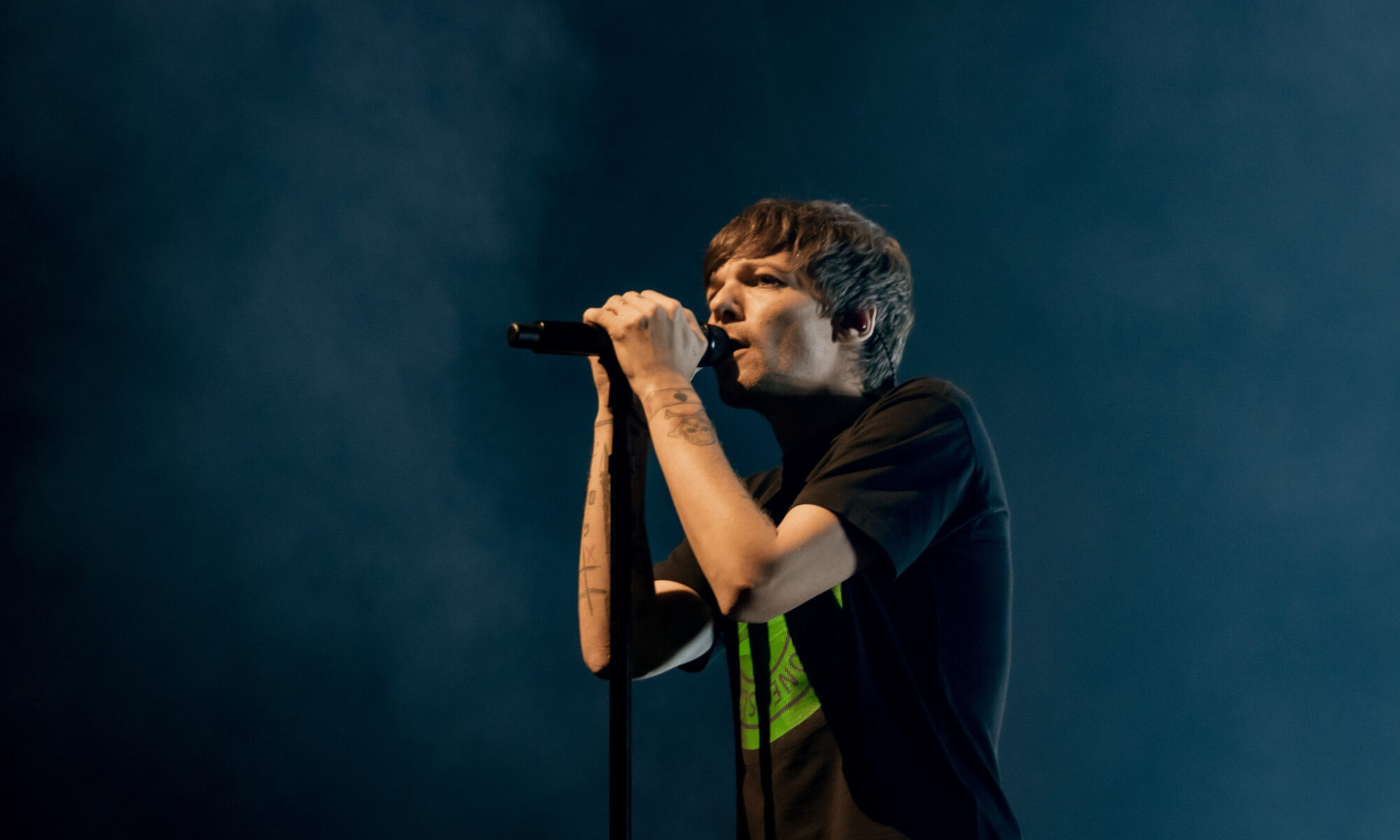 “I’ve been here since 8 am, but some people have camped out here for days,” said a security guard working at Louis Tomlinson’s sold-out World Tour show in Orem, UT at The UCCU Center. He said that the last time he worked a show that had this much “excitement” was at a One Direction concert at the Maverick Center in 2013, which was the last time the former One Direction member, Louis Tomlinson, performed in Utah. The hysteria following One Direction didn’t end when the band broke up – it seems to follow the members wherever they go, and on March 1, 2022, it made an appearance with Louis Tomlinson in Orem, UT.

When I arrived at The UCCU Center at 5 pm the night of the show, it was clear that a large number of fans had been there long before I was. Camping chairs, sleeping bags, and blankets were found towards the beginning of the lines. As I made my way down the queue of people, many were eating a quick dinner. Some were singing songs to pass the time. A variety of flags were being distributed for a fan project.  UVU college students finishing their school day asked what the commotion was about, and some just waited quietly with the anticipation for what was to come.

6:30 pm rolled around, and the mad dash to get into The UCCU Center began. The once organized line quickly dispersed into a big crowd trying to get in as fast as they could. After a health check consisting of proof of vaccination or a negative COVID test, the concert-goers made their way to get past security and into the venue. The mad dash didn’t end there. The seating for the show was general admission, so that meant first come, first serve.

While waiting for the opening band to start, a line for the tour merchandise wrapped long around the venue. My husband and friend waited with many others for nearly an hour to get their souvenirs from the show. An equally long line stemmed from concessions as well.

A band out of Southern California, made up of members Luke, Ashton, Gibby, and Max, called Sun Room, opened the show. I had listened to them prior to the show when I heard they that would be going on tour. Their music made me dream of warmer days ahead and going to the beach. Hearing it live was no different! They had a great, upbeat energy, and the crowd loved them! They sang songs such as, “Summer’s Here,” “Fun,” and “Red Dress,” among others and all were well received!

Their set glowed with a yellow and orange ambiance. I found it to be very fitting to their name and overall warm, laidback vibe. The audience went wild when they announced that they were going to showcase a new song called “Clementine” that was going to be released the next day, on March 2nd. Sun Room fulfilled its duties as the “warm-up band” well. After their set, the audience was even more excited for Louis Tomlinson!

Water was dispersed among the audience between Sun Room’s set and Louis’. At nearly every show prior to this one on Louis Tomlinson’s World Tour, multiple fans have become faint or passed out due to dehydration. I was very impressed that The UCCU Center provided such a service. It was so smart to maintain the safety and well-being of those in attendance. Soon, a large black curtain was hung in front of the stage with Louis’ signature smiley face with x’s for eyes displayed on the front of it. The lights dimmed, and, “Louis! Louis! Louis!” was chanted all around the arena. Strobe lights flashed, the curtain dropped, the band appeared and was followed by the man of the evening, Louis Tomlinson. Screams and squeals broke out throughout the venue.  My husband later told me that he didn’t know such high-pitched screams could exist!

Louis opened the show with, “We Made It,” one of the songs off of his debut album, Walls. A song from his One Direction days followed next. He encouraged fans to sing along to, “Drag Me Down,” prior to the start of the song, and they delivered! I even found myself singing along as I ran back and forth taking photos. After that song, Louis said a thank you to all in attendance. He said, “I have got a good feeling about tonight! I think it might be special!” When I headed across the arena to return to my seat for the remainder of the show, the song, “Two of Us,” began to play. Louis wrote this song about his late mother, Johannah Deakin, who passed away after a battle with cancer in 2016. The previously loud, spirited crowd fell silent, almost reverent even.

I observed the faces around me as I passed by. Most of them had tears streaming down, and Louis hadn’t even begun to sing yet. When I arrived back to my seat, a friend of mine had the same reaction. He has also lost his mother and said, “It really hits home, for obviously losing my mom. He really encapsulates what something so indescribable feels like.”

The lights on the stage seemed to perform with Louis and were perfectly synced to the music which made the show even more fun to watch. I noticed how clear and crisp the sound quality was, too. It was probably one of the best out of any concert I had been to. During the middle of the show, Louis shouted, “Utah! Unbelievable crowd here tonight! I can feel every single one of you!” The audience danced, jumped, and sang the night away to the artist’s songs like, “Defenseless,” “Fearless,” and “Always You.”

Whether it was his songs, One Direction’s songs, or covers of other artists’ songs, all eighteen of the songs he sang that night were welcomed with excitement! He first covered a song called “7,” by Catfish and the Bottlemen, and then a few songs later, he covered, “Beautiful War,” by Kings of Leon. While interacting with the audience prior to, “Beautiful War,” he said, “Let’s get your torches out!” and the auditorium was then filled with a glow that only cell phone flashlights at a concert can give.

Towards the end of the show, Louis said what I think a lot of fans, including myself, were thinking, “Utah, I’d be lying if a gig this size didn’t make me feel nostalgic about the One Direction days!” That led into another One Direction song, “Little Black Dress.” The energy was high the whole night, but there was something extra during those One Direction songs, especially, “Little Black Dress.” There was so much jumping and dancing that the floor beneath me was shaking! He finished his pre-encore set with the song, “Walls,” before coming back for three more songs and ending the night with, “Kill My Mind.”

Louis Tomlinson’s World Tour stop in Orem, UT won’t be one that I or anyone in attendance will soon forget. From those who experienced camping out to get the perfect spot, those who met new friends in line, to rocking out with Sun Room, and experiencing Louis Tomlinson’s first solo world tour, and more in between, it was a night filled with excitement and a truly memorable event.