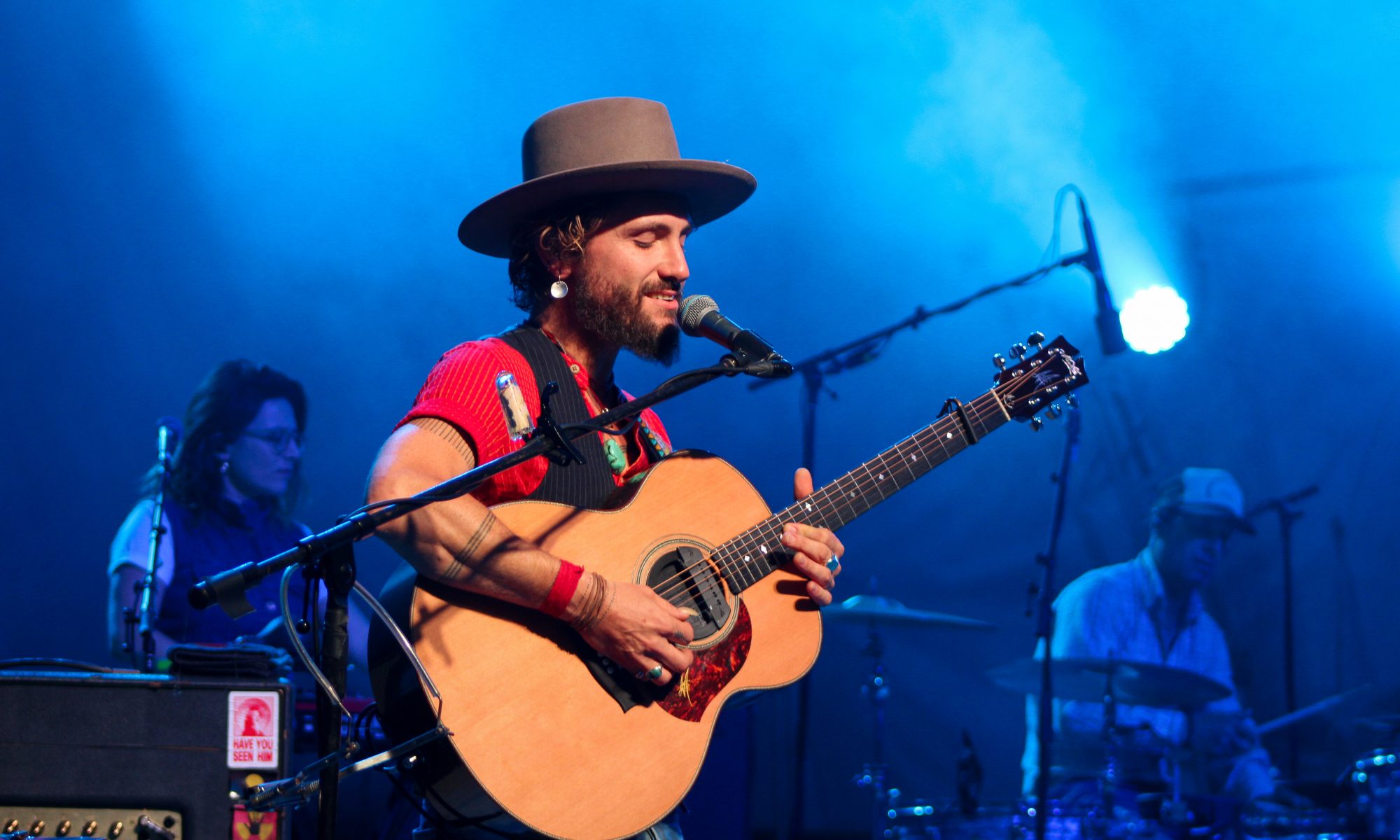 I’ve spent the last several minutes staring at a blank page, trying to choose the genre or style of music that best describes the John Butler Trio +.  I couldn’t settle in on a genre so I went to my Apple Music account and looked up what they titled JBT+ under. Well, it would seem they were as unsure as I was.  They were listed under Rock, (I agree with that) Roots Rock, (Yep sound about right) Alternative (Yeah that works) and Jam Band (There was some serious jamming going on so, yes).  Then I ventured over to Wikipedia and they added Blues Rock and Funk Rock. Here’s the thing, all of these are exactly right! So I guess it’s safe to say that John Butler and his trio plus one are an Alternative Blues Funk Roots Rock band that absolutely killed it at Deer Valley last Saturday night.  If there was an award for “Deer Valley Concert of the Summer”, this one would most certainly be one of the favorites to win that prize.

I, unfortunately, missed St. Paul and the Broken Bones.  But from everyone I spoke with and all the video I later watched on social media, I really missed out.  It sounds like they were the perfect band to open the evening and get the crowd going. Hopefully, I’ll get another chance to see them in concert because their set sounded pretty fun.

When John Butler took to the stage he shared with the audience that the indigenous people of Australia where he is from, before they travel through tribal lands, they acknowledge the people’s land that they’re on.  So in kind, he wanted to acknowledge the traditional “custodians” of this land here in Utah and pay his respects to the ancestors both past and present. He stated that we “Stand on the shoulders of our ancestors. It’s because of them that we see each other tonight”.  Talk about setting a tone. With that simple message, the audience became a united community.

The thing that immediately stood out was the talent in this group. This is a fresh and new version of the John Butler Trio.  In fact, it’s the John Butler Trio+.  Including John himself, this installment, which was formed this year, includes three additional people.  So if it weren’t for the already recognizable name, this might have been called the John Butler Quartet.  I enjoyed the + sign.  It’s a little tongue and cheek.  But this group is insanely talented.  I don’t think it’s a secret that John Butler is an exceptional guitarist, vocalist, and frontman.  Terepai Richmond played the drums with such vigor and intensity that at one point in the show one of the roadies had to come out mid-song and slide the drums back in place.  I’m not sure if I’ve ever seen that before. Owen (OJ) Newcomb moved from bass to keys and back seamlessly throughout the evening. My personal favorite moments involving Newcomb were when he’d play on his upright bass.  I love those things! And finally touring member, Elana Stone, a singer-songwriter in her own right, enhanced the group with her multi-instrumental contribution. She played keyboard and percussion throughout the night and her backing vocals were strong and blended so well with the others.  During songs that were extended out into a jam session, I enjoyed moving from one of these talented musicians to the next. Each one of them blowing me away song after song.

It is really hard for me to pick my favorite moments from this concert because I could easily say something about each song and how amazing that performance was.  In order to keep this review shorter than The Illiad, here are a few of the highlights.

Before Butler played “Faith”, he talked about how people have different religious beliefs and talked about how what might seem strange or even ridiculous is very real to someone else.  He said that what you believe becomes your reality. He joked that some believe Elvis will return and save us all. Butler said “When I feel connected I don’t feel alone. I don’t think it’s a biological accident.”   The band proceeded to play the song. The audience seemed really moved by this song. And they were really moving to this song! That was something that stood out big time during this concert, just how much people were up and dancing.  Sometimes groups would form a dance circle and be dancing to the music together, sometimes couples were dancing together like they were at a western club, and most people were dancing but with their eyes always fixed onto the stage.

There was a moment in the show when John Butler was on stage alone.  He told us he used to play the next song a lot when he was growing up and busking in Australia.  It’s interesting to hear John talk because he doesn’t have an Australian accent. I would guess having an American mom might be the reason. But if he didn’t say that he was from there I would never have known.  John played a song called “Ocean”. It’s an instrumental that he plays on a 12 string guitar. The piece is over ten minutes long. Some of you might be thinking, “A ten minute instrumental? No thanks.” But those of you who know the song, and especially those of you who were at Deer Valley know just how jaw-droppingly amazing this song was.  It would appear that John Butler uses a looping pedal to create a beat at times, and then proceeds to work his way across the fretboard. The song builds to the point that people are dancing. Yes, dancing to a guitar instrumental. The songs builds even more and the audience began clapping along. Whenever there is a break in the song the crowd would applaud.  I’m not sure if they thought the song was over or if they just couldn’t wait to share their approval but there were a few moments where they would cheer loudly into the starry night sky. The song builds even more to the point that people weren’t moving as much and they definitely weren’t clapping anymore. Their eyes were completely focused on what John was doing.  My eyes moved back and forth from the stage to the big digital screen when I wanted a closer look at what John was intricately crafting with that guitar. The crescendo of that song was explosive that when “Ocean” was completed the crowd completely erupted into what I believe is the loudest and longest ovation I’ve ever heard at Deer Vally. People were going absolutely nuts! The audience who had been sitting down for the concert could not stay in their seats.  They lept to their feet and completed the much-deserved standing ovation. I looked around the audience and the word I saw most people saying was, “Wow!”. John simply just threw up the peace sign in response to the deafening crowd.

The rest of the band returned the stage and things really picked up.  Butler was moving so much that he often talked about altitude and joked (hopefully) about feeling like he was going to pass out.  It didn’t seem to slow him down. I believe it was during the song “Zebra” that he told the crowd to sing along with him. He told us not to worry about how we sounded.  He said the person next to us was worried about the same thing. He then stated that we “Don’t have to sound good. Just be loud. Be Brave.” And the people listened. People were singing along so loudly without a care in the world!  The entire hill was moving. I saw security dancing a little and I even saw people in line for the bathroom dancing. That may have been for a different reason, but it looked like they were just enjoying the music from my vantage point.  But you never do know.

A funny moment during the show happened during the encore when John flubbed some words he was trying to say. He was trying to say the words massive and around and combined them to say “Rassive”.  He said he created a new word and then said that he wanted to see #rassive floating around on social media after this. The audience loved John Butler’s down to earth demeanor and taking things like this in stride.

The show concluded with “Funky Tonight”.  John mentioned that they were almost out of time referring to the 10 PM noise ordinance in Park City.  I’m sure it was played at the usual tempo, so it might just be in my head, but thinking that they were running out of time made it seem like “Funky Tonight” was being performed even faster.  There was a point in the song where John was on Banjo and he was playing right in sync with OJ Newcomb’s bass playing.  I don’t think I’ve heard banjo and bass being played together like that before.  I loved it.

Another roar of the crowd closed out the night.  John Butler and his trio + seemed to love playing together and really seemed to enjoy this audience.  I think people would have stayed for one more song if time permitted. They did not want the JBT+ to leave.

I have been so impressed with the shows at Deer Valley this summer and this one was no exception.  People were in such good spirits after the show. Walking to my car I could hear people still talking about how amazing “Ocean” was, or how much they liked John Butler’s voice.  Everyone seemed to be euphoric leaving the show.

It’s hard to believe that there are only two more shows left at the Snow Park Outdoor Amphitheater.  If you’ve never seen a show there, you have two chances left this summer. If you can’t make those, I highly suggest you make it a point to get there next year.  The Deer Valley Concert Series is quickly becoming a summer tradition in Utah. They’ve done a great job booking talent, and the entire experience is top-notch.

To purchase tickets to one or both of the remaining shows at Deer Valley click here!