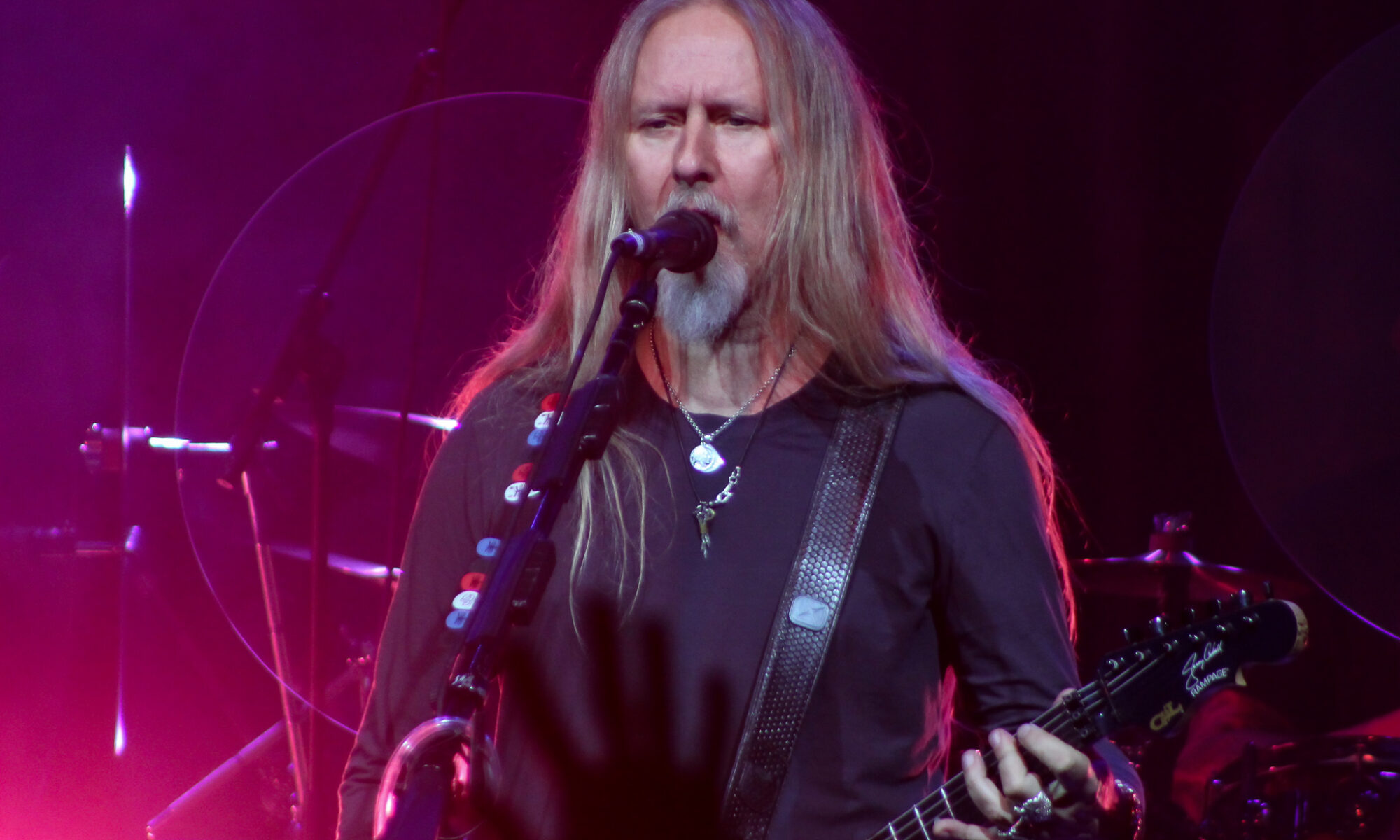 Salt Lake City was busy that night.  There was a Utah Jazz playoff basketball game, and pretty much every concert venue in the area had a show.  Parking was scarce, and people were everywhere.  The was a buzz downtown for sure.  I tried a few of my go to spots with no success.  I finally found a spot pretty far from The Depot, but there was no concern.  Electric scooters to the rescue!  I made it to the venue in no time.  Due to the rain, most of the fans had already made their way inside.

As Jerry Cantrell took the stage with his band, fans rushed from the bar area to find any open space on the floor still available.  I’m not sure if this show was sold out or not, but there was very little room on The Depot floor.  The show opened with Brighten album opener, “Atone”.  People were already feeling the music.  The woman next to me knew every word to “Atone”.  Actually, she knew every word to every song.  I was impressed.

Cantrell wasted no time in playing Alice in Chains songs.  “Them Bones” was the second song in the set.  This got the crowd really fired up. My first impression was how good Jerry and the band sounded.  It was incredible when that iconic Alice in Chains harmony hit the ears. I looked up at the balcony and I could see the VIPs, who have a tendency to stay in their seats, rise to their feet to give an ovation to that song.  It wouldn’t be the only time they got up.

There wasn’t very much crowd work from Cantrell through the first 4 songs.  But there was a funny moment when he tried to flick his guitar pick into someone’s beer cup.  He made it on the second try!  “Oh! Three Pointer!” he exclaimed.  “I’m feeling good tonight.  How about you?”  Judging by the crowd’s reaction, they were feeling great!

Cantrell mixed Alice in Chains songs, “Sea of Sorrow” and “No Excuses” into a stretch of solo songs like, “Cut You In” off of Boggy Depot, and a song I really enjoyed, “Angel Eyes” off of Degradation Trip. Seeing as these songs all have the same songwriter, the solo songs mixed well with the Alice in Chains favorites.  They don’t sound alike, but they have a feel that worked for the setlist.

I thought this crowd was great.  They weren’t the most animated audience.  At one point Cantrell even questioned if weed was legal in Utah because the crowd was so chill.  But they were really into the show.  And, at least in my section, everyone was really cool to each other.  People would leave to grab a beer, people would fill their spot.  Those people would go grab a drink, and the people who left earlier would go back to their spot.  There was a symmetrical flow.  I liked it.

I also really really liked vocalist, Greg Puciato.  Not only were fans hearing him sing in place of Layne Staley, but now hearing Puciato sing these songs instead of current Alice in Chains frontman, William DuVall.  It’s a situation that could easily go sour if he didn’t have the chops.  But I thought he sounded amazing!  I sent a short video to a friend and he stated that Greg Puciato could easily step in and perform for Alice in Chains if they wouldn’t skip a beat.  I totally agree.  He had his own style and voice, but he filled the vocal role perfectly!

Jerry Cantrell followed his string of solo songs with run of Alice in Chains songs.  Fans were definitely into the solo stuff.  But you can’t blame them for getting up when they heard favorites like, “We Die Young”, “Rain When I Die” or, “Would?”.  I just stood there watching Cantrell shred on these songs.  Never thought I’d be this blown away.  I knew I would like the show, and as I mentioned I was excited to see Jerry Cantrell play live.  But I was so sucked into the whole performance.  No one was running across the stage.  There wasn’t a lot of chatting with the crowd, or storytelling.  It was all about the music and these songs.  “Would?” was the closer of the main set.  What a great song.  People were screaming the lyrics back to the stage.  But more was to come.