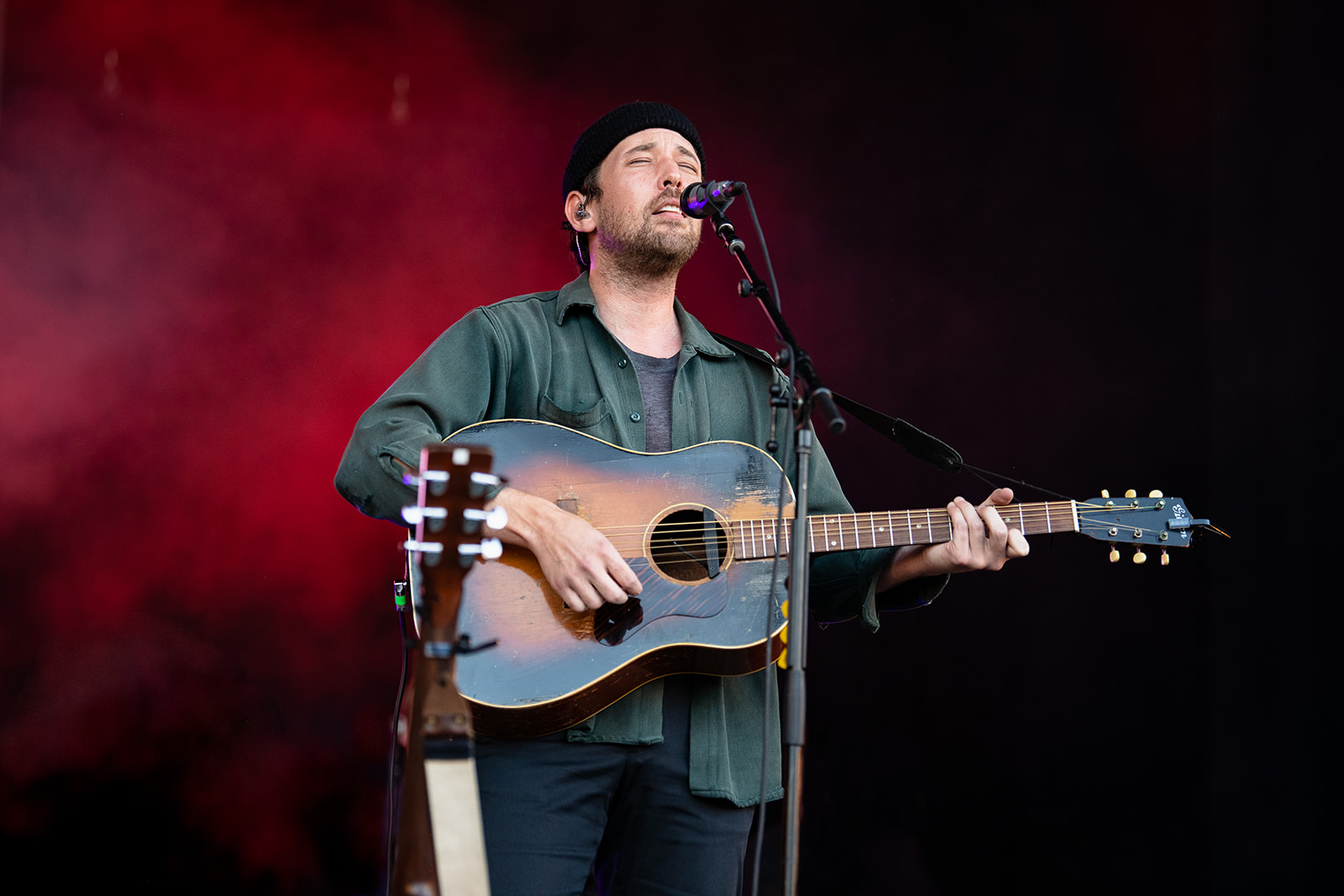 On Monday, June 27th, Fleet Foxes played the 1st show of their 2022 tour at the Sandy Amphitheater. I have been a long-time fan of Fleet Foxes. This was a concert I had been looking forward to for a while. This is the band’s first tour in four years. Many have been eagerly waiting for them to return to the stage. It would also be the first opportunity to watch them perform songs from their 2020 album Shore. The Seattle-based folk band is known for putting on an excellent show. Expectations were high as the crowd gathered to take their seats for the sold out concert.

As I waited for the opener of the night to step out onto the stage, I was surprised to see the lead singer of Fleet Foxes, Robin Pecknold, walk out instead and address the crowd; “I just wanted to quickly introduce a very special artist that traveled all the way from Sao Paulo, Brazil, to play with us. I’d like to get a great Utah welcome to Tim Bernardes.” This was the first time I had ever seen a member from a headlining band come out before the show to introduce the opener. I thought it was a pretty cool gesture.

Tim Bernardes told the crowd that he would be playing some songs from the Fleet Foxes album, as well as some songs from his own band. After singing his first one, he said he just remembered that all of his songs would be in Portuguese. He asked if anyone there spoke the language. I was surprised to see quite a few people respond that they did. Tim excitedly pointed out one fan even holding up a Brazilian flag. I do not understand Portuguese, but that did not stop me from enjoying every second of his set. Tim’s voice was beautiful and his songs were a perfect way to get the evening started. I watched as the crowd stayed completely captivated by his performance. Many people there may have recognized his beautiful vocals, as he was featured in Fleet Foxes most recent album.

Fleet Foxes took the stage and were met with ecstatic cheers from fans. Before starting up the music Robin Pecknold took a moment to address the crowd. “Thank you so much for being here on this beautiful, beautiful night. And thank you to Tim Bernardes for opening the show. That was incredible. And thank you for being such a sweet audience. And we’ll see how long this dumb beanie I’m wearing lasts.” I did think the beanie was an interesting choice in the 90º heat. But later in the evening, he explained his reason for wearing It.

After one fan shouted out “lose the beanie, Robin” he responded, “Ok, the feedback is to lose the Beanie. I understand this feedback. It’s ridiculous, I’m wearing a beanie and Birkenstocks.  I’m just trying to be myself on stage a little more. I’m just trying to not make sense.” He continued to tell the crowd “but I read that it’s good for your head to be hot when you sing, is that true?” I don’t actually know if there is any truth to this, but he is an incredibly talented singer, so whatever he is doing must be working.

As soon as they started their first song I immediately got chills. They started with “Wading In Waist High Water”. One of my favorites from their most recent album “Shore”. They played a decent number of songs from the same album during their set, including “Can I Believe You,”  “Featherweight” and “A Long Way Past The Past”. The vibes of the night were chill and peaceful. Pecknold’s smooth vocals, accompanied by a variety of instruments, filled the amphitheater.

After each song, the lead singer made sure to thank the audience for their applause. I was very impressed with the genuine and gracious demeanor he had with the crowd and fellow musicians throughout the night. His effort to continually recognize the artists who contributed to each song was noticeable. Making sure to share the spotlight with each musician. I was mesmerized by Morgan Henderson’s talent on the saxophone, and later in the evening with a flute. Joining Fleet Foxes on stage was horn ensemble The Westerlies. They were the perfect addition to the already talented band. This tour is not their first collaboration with the band, however, and they have been featured on multiple songs on Fleet Foxes albums.

As the night went on, the audience continued to enjoy some of their most popular songs like “Mykonos,” “Blue Ridge Mountain,” and my personal favorite “White Winter Hymnal.” As the sun began to set Robin looked out at the audience and said “Utah is very beautiful, do you guys see Austin Richard Post around town a lot?” By the reaction from the crowd, it’s possible that many people in attendance were not familiar with Post Malone’s full name. Or aware of the connection he has to Fleet Foxes. While their music is very different, local Utah resident, Post Malone has often been vocal about his love for Fleet Foxes and invited them to collaborate on a song for his most recent album.

At the end of the evening after playing 18 songs, the band played a Three song encore. During the second song of their encore, they invited Tim Bernardes to join them in singing “Going-To-The-Sun-Road.” They ended the night with another favorite “Helplessness Blues,” and while I wished the concert could have gone on all night, I left the venue still in awe after their performance. Fleet Foxes exceeded all my expectations and I am already looking forward to the day when I get to see them again.