We had to wait a long time for Erasure to return to Salt Lake City.  Ok, so it was about four years, but it felt like a really long time! Typically when Erasure comes out with a new album, their tour makes its way to The States fairly soon after their album is released.  The album World Be Gone came out in May of 2017, and instead of heading out on their own tour, Erasure accepted an invitation from Robbie Williams to be his support act on his summer stadium tour throughout Europe.  What a great opportunity to gain new fans that must have been. In watching several YouTube clips I found it so cool to see Erasure play in front of a new crowd that might not know all of their music. I saw them singing along to the songs they knew like “A Little Respect”, “Chains of Love”, or “Stop”, and applauding songs they weren’t familiar with, but really enjoyed.  However, this tour delayed them from setting out on their own headlining tour. I was happy for them that they were so well received though.

A year later, their World Be Gone Tour reached Utah for two sold out nights at Kingsbury Hall.  As I walked up to the front of the house to find a good spot to take photos, I looked out into the crowd to see what Erasure would be seeing for the evening.  I could see people in anxious anticipation, so excited that their favorite band was back in town. I could see a few men who were clearly dragged to the show by their wife or girlfriend.  I hoped they would be good sports.  Having liked this band since I was 12 it always throws me a little how old we’re all getting. I used to go to Erasure shows and look around and think how cool everyone seemed, and how they were so much older than me, but in a cool way.  Now we’re just old and maybe a little less cool. But that’s the magical thing about a concert, and live music. When the show started, the crowd became 25 again. And the worries of the day were gone, and inhibitions were out the window.

Erasure opened their set with “Oh L’Amour”.  The audience was immediately taken back to the place where they first heard this fan favorite.  It’s so interesting because this song was not a hit. But fans love it so much that it gets the same response, if not greater than some of their highest charting singles.  Everyone was on their feet dancing, and singing as if it was 1986.

The thing I love about an Erasure concert is they don’t shy away from the songs they created to give them the thirty plus year career they’ve had.  They play the hits! Songs like “Ship of Fools”, “Victim of Love”, and “Who Needs Love Like That” are songs they’ve played thousands of times, and yet they know what the audience wants to hear.  These songs are always met with loud applause. They did a great job of sprinkling in songs from their new album World Be Gone. These songs are so surrounded by classic songs that the crowd seems to be just fine with hearing them.  And they’re good songs, so that helps.

As a huge fan, I would be fine with some deeper cuts.  But their hits are so good I don’t even mind. They played “Phantom Bride” off of their album The Innocents.  The rumor was this was going to be the fourth single off of that album but it never happened. It’s a great song, and while never released as a single, whenever they play it (which isn’t often), it’s always one of the major highlights of the show.  A few more songs in this category would have made the song perfect for me, and a few others I spoke with after the show yearning to hear more of these songs.  But I’m sure if they did that, there are others who would have wished they played more hits.  I met a few people after the show who told me this was their first time seeing Erasure.  So for them, I was glad they got to hear such a hit-filled show.

Erasure did an awesome cover of Blondie’s “Atomic”.  This is the third Blondie song they’ve covered over their career.  They’re starting to catch up with the number of ABBA songs they’ve covered. So far the tally is three (Atomic, Heart of Glass, Rapture) to Five (Lay All Your Love On Me, SOS, Take a Chance On Me, Gimmie, Gimmie, Gimmie).  Maybe we’ll have a Blondie-esque album on the horizon. Anyway, the song was covered brilliantly and can be heard on Erasure’s World Be Live album, which is a live recording of one of their London shows from this tour. I recommend checking it out!

Vocalist Andy Bell sounded as good as ever.  The falsetto isn’t quite what it once was, but not many men in their fifties are singing with a strong falsetto.  So I’d say he’s still doing pretty great.  The thing I love about Andy’s voice is how rich it’s become. When he was younger, like many great singers, he had a huge vocal range and could go anywhere with it.  But because of that huge range, things can come easy, and singers like that tend to be a little wild with their voice, and uncontrolled. Now that Andy is older, I think he knows his limitations, therefore he sings more controlled, and focused.  I love how his voice currently sounds. There’s a fullness to it that I really enjoy. Don’t get me wrong, when he needs to open those pipes to hit those falsetto notes, he hits them. When he sings “Blue Savannah”, or “Drama” now, it moves me more than it ever has, and that’s due to the maturity of his voice.  He seemed in good spirits in this show. He spoke a lot more than I remember him doing in other shows. He joked with the audience telling them they were too young to remember some of their older songs. He also joked that he was only 14 when he auditioned for Erasure in 1992, making him seem younger. Fact is he auditioned in 1985 and I believe he was 20.  But everyone was in on the jokes and enjoyed the banter.

Vince Clarke.  What can I say about Vince Clarke that hasn’t been said?  The guy is a genius. That’s been said before. But it’s true.  I think because he’s in a band, he gets praise for the music he writes.  And rightfully so, however, I think his true genius lies in his technical wizardry.  The way he creates these sounds; these bleeps, loops, hooks, and beats and blends them together to make beautiful melodies and great songs is nothing short of extraordinary.  I love that the music is reprogramed for the live show.  It adds a special element to the live experience.

The stage personas of Andy and Vince could not be more different, yet perfect.  Any, the flamboyant frontman dances around the stage in his skin-tight bodysuit and interacting with the audience with all the personality you’d want from a great frontman.  Meanwhile, Vince, ever the stoic, serious Synth Lord in a grey suit(See what I did there Star Wars fans?). On this tour, Vince is perched high above the stage surrounded by synthesizers, a laptop, and an acoustic guitar.  He has a microphone that allows him to speak into Andy’s inner ear monitors. They’re fascinating to watch because they seem so different on stage. One so subdued, and the other so high energy. The contrast is a consistent dynamic of their shows.

The boys were joined on stage by backup singers, and twin sisters, Valerie and Emma.  Valerie has been singing with Erasure all but 2 of the tours I’ve seen them on. Emma sang with Erasure on the Wild! Tour back in 1989/90, and has since reunited with her sister and Erasure on the past few tours.  They sound great together, and exceptional with Andy. They bring a consistency to the shows and help Andy whenever he flubs a lyric. And he always flubs at least one line in every show.  It’s part of his charm!

The audience was so interesting in this show.  They sat a lot more than I’ve seen at an Erasure show.  It was always during the slower or newer songs, but it was something I hadn’t really seen before.  I was worried that they’d sit the whole time, but it was clear that they were conserving energy because as soon as they heard the first note of a song they liked, they launched to their feet and went crazy.  I mean crazy! Dancing like no one was watching, and singing like they were in the shower or in their car. You know the kind of singing when you close your eyes because you’re feeling so much.  During songs like “Sometimes” or “Stop” Kingsbury Hall was deafening!

As I mentioned in my review back in 2014, I love seeing the mix of the audience here in Utah.  Andy Bell is an openly gay man and has been since Erasure has existed. Because he has always been open about his sexuality, Erasure has always had a large LGBTQ following.  But they also have a huge following here in Utah among the Mormons. So to see Mormons sitting next to a gay couple and singing these songs and dancing along with each other makes me so happy.  Again, it’s amazing what great music can do. People are bonding because they love this band and their songs.  In these moments no one cares who is from what church, or what their lifestyle is. They just want to sing and dance and have a great time.  I even saw one of those men who was with his wife or girlfriend and didn’t seem thrilled to be there, eventually dancing by the end of the show. He shrugged his shoulders, and just went for it. No one can resist a good beat. And Erasure songs are full of great beats.  I saw a woman with her husband talking with a gay couple before the show. Things seemed polite and friendly. The husband seemed to be trying really hard to be cool but was clearly not the most comfortable he’s ever been. But by the time Erasure came out to sing their encore song “A Little Respect”, he was singing with those guys, and even one time when the chorus says “Give a little respect, to me!!!”  he pointed to the gay couple and mouthed, “No, you!” and they retorted “No You!”. It was all in fun, but it was a special moment for me. We all do so much talking, and preaching about what should be what, but maybe we all just need to go to an Erasure concert, sing along with each other, and dance our differences away! Music has the power to do that. 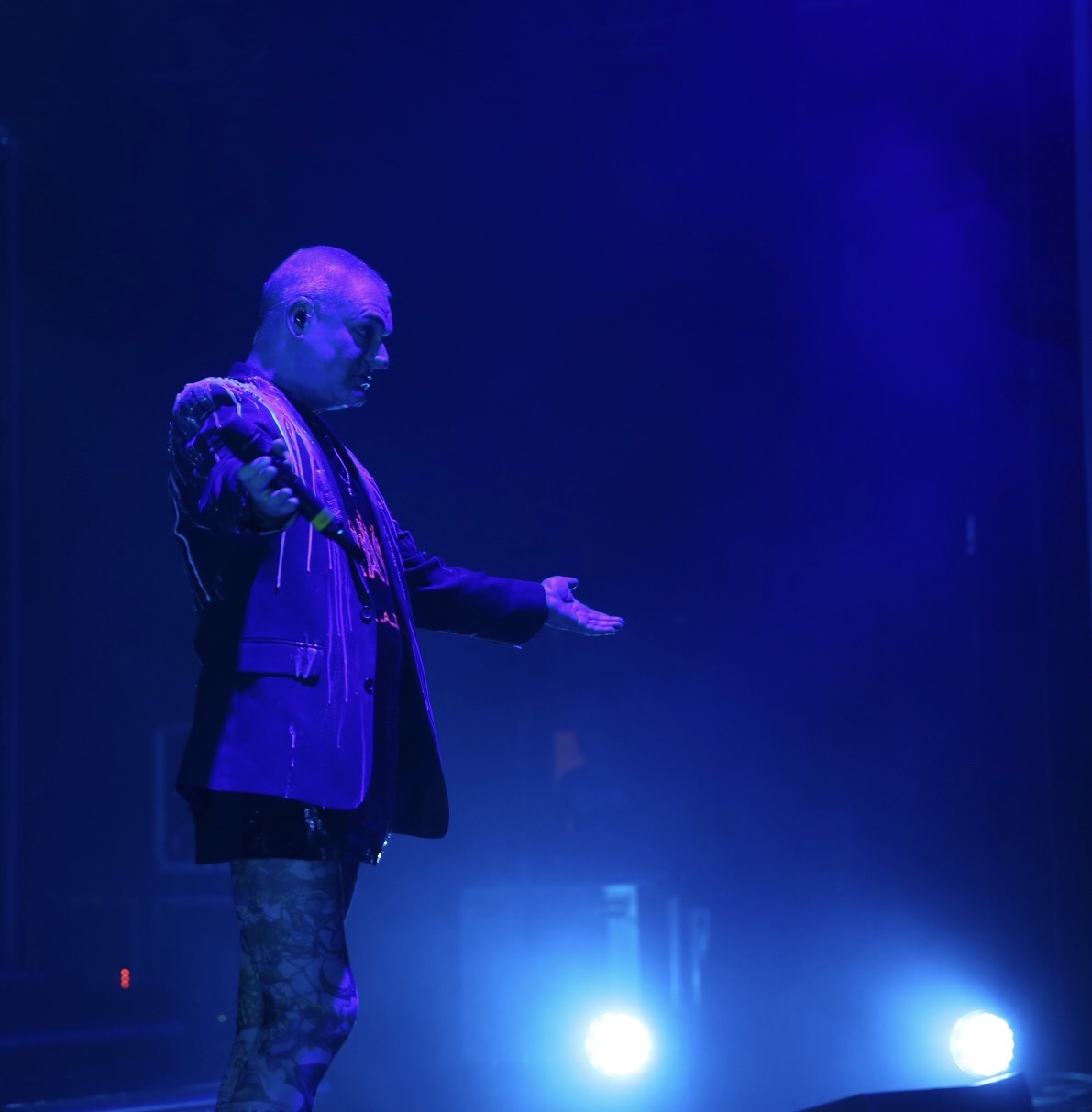