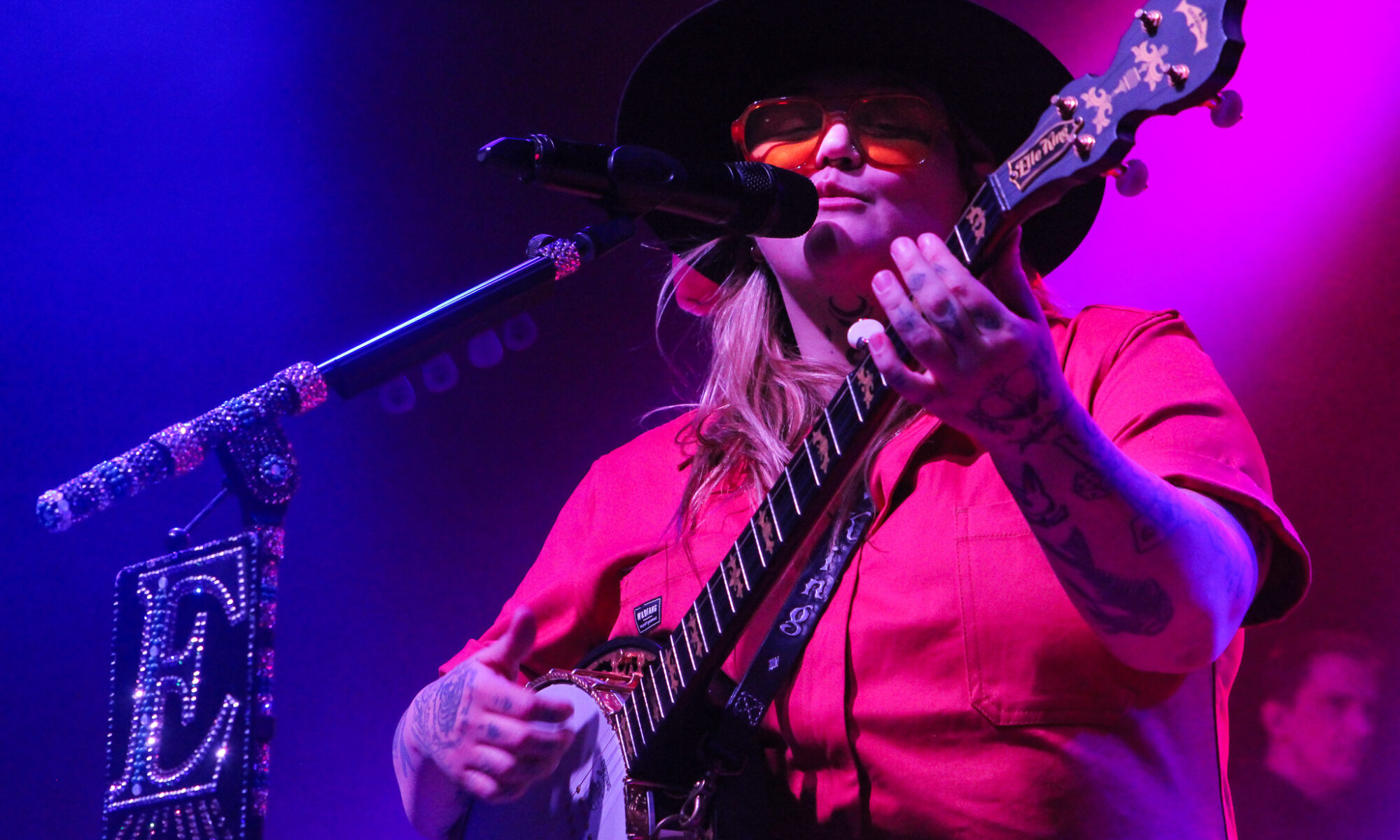 The Depot was sold out. I mean the place was PACKED! For whatever reason, I hadn’t been to The Depot in a while. It’s a great venue. One of my favorite venues in Utah. I don’t think I have seen it that full in a while. I had a hard time getting to the pit. People were nice to let me through. Most people seemed to be in great spirits.

Lola Kirke was the perfect opener for Elle King. Tons of personality, a great voice, and really fun songs to start the night off. Lola is a month away from releasing her sophomore album Lady For Sale. The majority of the setlist was from the unreleased album and the songs were very well received by the audience. Lola seemed so natural and so comfortable on stage. She belongs there. If I had to define her sound, I’d say her music falls under Alternative Country.

She performed one of her singles from Lady For Sale, “Better Than Any Drug”. During the song, she laid down on the stage. There she speaks in a breathy, sultry voice. The crowd loved it. Things got steamy there for a second there in The Depot. I noticed a couple of people jokingly fanning their faces. It was a really fun song and the highlight of the set.

Lola mentioned after the song that she was worried that her white pants were see through. I had the chance to chat with her after the show and she made the joke that she was still concerned. In an attempt to make her feel better I said, “Don’t worry, I didn’t see anything”. The comment was intended, but later I realized that I was implying that I was looking! While in actuality I was way in the back behind the packed floor. I couldn’t see Lola when she went to the floor. So hopefully I didn’t come across as a total creep!

Speaking of a packed house, The Depot was pretty full during Kirke’s set. I was really happy that Lola was able to perform in front of so many people. You never know as an opener how many people you’ll be performing for. At best it seems you get a half full house and by the end, you finally have the full crowd. But from the moment Lola started the floor was full. And as I mentioned, they were into it. They really enjoyed her music. I could see some people were either fans or had seen she was the opener and did their research. Those people were singing along. Judging by the people buying merch and taking photos with her after her set and after the show, they were fans.

Lola Kirke finished her set with “Monster” off of her debut album, Heart Head West. Judging by the reception Lola received during her set it’s clear to me that she needs to return to Utah soon. I could see her headlining Kilby Court, Urban Lounge, or perhaps The State Room in the near future. She’s an artist to keep your eye on.

As I mentioned, I didn’t know a ton of Elle King’s music. I knew this show was sold out, and generally, that’s a good indicator that this is a must see show. I make a point of not listening to an artist I don’t know before a show because I want to come in fresh. Elle King fans will know her music more than I will no matter how much I research and cram to catch up.

I really enjoyed visiting with fans while I was in the photo pit waiting for the show to start. There was an odd incident where a lady who had potentially pre-gamed a little too intensely tried to make her way up to the railing and was eventually removed by security. Once she was gone tensions subsided and the focus went back to the excitement that Elle was about to take the stage.

Elle and her band The Brethren, walked on stage dressed in coveralls. The energy and the temperature in the room went straight up. From the first note of the first song, “Good For Nothin’ Woman”, I knew I was in for a good night. I immediately regretted having not listened to Elle King more. The music varied from Alternative Country to gritty Outlaw Country. It was the kind of music you expect to listen to in a dive bar. The atmosphere was electric.

“What night is it?” King asked. It must be so hard to keep track when you’re on tour. Days just blur into one another I’m sure. “Even if this was a Tuesday, this is big Saturday energy! It is Saturday, right?” Salt Lake City brought it, and Elle King could feel it. I take great pride when artists touring through notice how awesome Utah crowds can be.

On the way to the concert I had the thought that her hit song, Ex’s & Oh’s” is probably not even Elle King fan’s favorite song of her’s. I was correct in that thinking. “Ex’s & Oh’s” was the seventh song in the set! I thought that would have been the last song of the night or the song before the encore. Was I off or what? That song placement tells me that King is confident in her other songs. That she has enough good songs that she can play her big hit in the middle of the show and the second half of the concert is going to be strong. And strong it was.

I enjoyed King’s covers of Charlie Daniels Band’s “Long Haired Country Boy” and Bonnie Raitt’s “Angel From Montgomery”. I’m a sucker for covers. Especially when they’re done right. She gave these songs her personal touch that I had to think for a second if they were songs of hers that I knew or songs I knew from somewhere else. That’s a good cover.

King shared that she has been to a lot of places and had a lot of fun. She stated that while she’s had a lot of fun in Utah, she’s always afraid that she’ll get in trouble here. The crowd jeered! “I Can’t? Are you calling me a p#$sy because I haven’t had enough fun here yet?” Her crowd word was so good. It felt like we were all friends watching our friend perform. It was that personal at times. Everyone seemed to be having a great time. Things were rowdy, and people were feeling pretty good, but everyone seemed to be keeping it under control. So I thought.

In the middle of a song, Elle stepped up to the mic to address some fans who were not in control. “Stop Fighting! I knew there was going to be a fight. If you’re going to fight get the f*¢k out!” The crowd cheered. From my spot, I couldn’t see the incident. But I’m sure Elle could see this brewing. From what I could tell she stamped out the issue and the show proceeded without incident. In a way, it kinda felt right that there was a fight. But I’m happy nothing really happened. That can really ruin a show.

Before Elle King left for her encore, she performed a song she recorded with Country star Miranda Lambert “Drunk (And I Don’t Wanna Go Home). This was the big song the crowd was dying to hear. Everyone in The Depot was either holding up a beer or their cell phone with the light on. It was a great song to sing along to. King encouraged the audience to be better people coming out of the pandemic. That we should celebrate being together. and “If nobody told you, Elle King loves you”. She left the stage as the band played on.

King returned to perform “Little Bit of Lovin'”. The audience was still going strong, and according to the printed setlist she was supposed to perform, “America’s Sweetheart”. I’m not sure when she made the audible, but she actually closed the night with a cover of Khia’s “My Neck, My Back (Lick It). Now I’m not sure if this is a cover she commonly does, or if this was a rarity. From what I could tell, the majority of the women knew every lyric. While I was a little disappointed to not hear “America’s Sweetheart” live, it was fun to see how excited the crowd was for this very Mature Audience only cover.

I wish I could have said that I was a huge Elle King before this show. I really do. But I left The Depot on Saturday repentant of that oversight. I consider myself a fan now and I will be so happy to see her next time she stops through Utah. I asked Lola Kirke after the show what she thought of the night and how it compared to other shows she’s done. She looked at the emptying Depot and said, “Well look for yourself. That’ll tell you how tonight went.” I looked over at the now empty floor of The Depot and saw beer cans, cups, paper, and puddles scattered throughout. The debris told the tale of what was an incredibly fun night of great music.

Encore:
Little Bit of Lovin’
My Neck, My Back (Lick It)