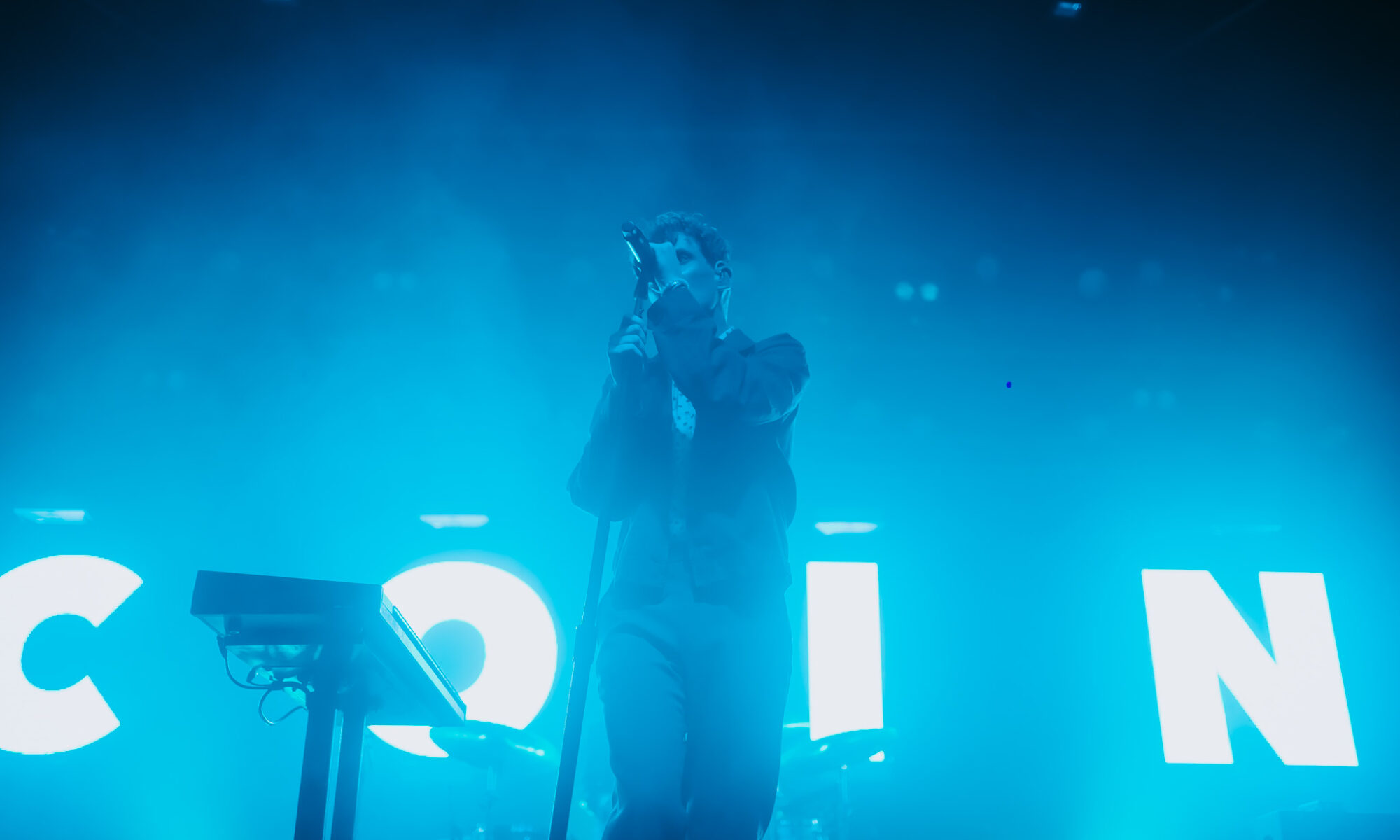 COIN w/ Valley November 6 The Rockwell at The Complex

Coin and Valley were an absolute dream the other night in Salt Lake City, Utah! Very fitting as well since this is the Rainbow Dreamland Tour. Where do I even start?!

On Saturday night I arrived right before doors had opened. I had some trouble checking in but it ended being okay and got through the main doors! They were playing in The Rockwell (the big room) at The  Complex, which is one of my favorite venue spots. Quickly, the room started to fill up with eager fans as they skipped, literally, into the venue, securing a spot. I checked out both merch stands that had a lot of cool things and told myself I’ll come back later! I shouldn’t have done that because by the time the show was over almost all sizes of merch was sold out! So, pro tip; if you can get merch early, always do!

Anyway, back to the beginning. So as I walked up to enter the pit I notice it’s a different security guard than usual. We make small talk and she informs me I’m the 4th photographer to check in for the night. Which was a little shocking! Usually, there are maybe 3 of us at one time in the pit but tonight there ended up being 9 photographers in the pit at once! It was challenging at times because there’s only so much space and you only have the first three songs to capture the artists that close so it was a little nerve-racking. However, there were also familiar faces and friends who I ended up sharing the pit with which is always an amazing time!

Valley was the opener of the night and let me just say that they blew my mind! I saw them once before this when they opened up for The Band Camino back in 2019. It was also at The  Complex but in the small room, so now they’ve upgraded to opening up in the big room and boy do they deserve it!!

If you didn’t know Coin was headlining that night, and you walked in while Valley was opening you would think they were the headlining artist! And I absolutely love when that happens! The energy the crowd gave Valley and that they reciprocated was amazing! The chemistry was incredible and the vibes all around were so much fun!  Someone in the crowd held a sign up that said “Valley please come to SLC”!

While on stage, they announced that they need to and will come back for a headlining show in  SLC, because they were also blown away by the reaction. Valleys frontman, Rob Laska is so alive on stage! The amount of movement and jumping keeps the energy up. I knew one song by Valley before I saw them live and it was one of my favorites at the time. After seeing them live in 2019 I became a huge fan, so this was really exciting to me to be able to see them again and photograph them again!

They opened up with their hit single “Nevermind” which came out in 2020 before their 2020  album sucks to see you doing better. Once they started and kicked off the night, the energy never stopped. They were the perfect openers to hype up and warm up the crowd for COIN!

COIN came on stage and all I can really say is WOW! Chase Freaking Lawrence is absolutely incredible! They came out opening up with the banger “Chapstick” which was the perfect choice to kick off the night. The crowd remained wild for the entirety of the night. Serotonin levels were high and this was honestly probably one of my favorite shows of 2021!

The amount of energy the band has on stage, specifically Chase is crazy! They were so so fun to watch! Their whole set was electrifying and groovy. It’s the best thing ever when you can literally see the artists feed off of the energy the crowd is throwing out and it bounces back right into the fans! Making it an overall energetic night.

I have loved COIN since 2015 when I saw them opening up for Walk the Moon! Since then, I’ve seen them one other time live in 2019, right before my concert photography career really kicked off. I remember thinking I need to photograph a COIN show one day because the energy is always insane. And I finally was able to and it was everything I could’ve asked for!  Energetic artists, energetic crowd, perfect setlists & stunning visuals. Literally had it all!

Fun fact, the Salt Lake City show would be their biggest headline show to date. It was a  magical moment for everyone involved! It was also a sold-out show, so even better. They played songs from every album, old and new and I sang along to every one, along with the rest of the crowd. There were even some moments that I cried because some of their songs hit so hard for me and are extremely relatable.

I cried during “Youuu” and “Valentine” and I saw others crying during “Let It All Out (10:05)” of course. Actually, the band later that night posted on their Instagram a video from the SLC show with the caption, “I really cried on stage last night” so we were all crying together! Which is really, really beautiful. On his personal  Instagram, Chase said, “thank you Salt Lake City, that was honestly the best coin show ever  quote me,”

Well, that’s exactly what I just did, quoted Chase Lawrence because what a compliment to  SLC!

Amanda Harwood, 23, was front and center against the rail for the show. She said, “There is nothing like the feeling of singing along with your favorite band. Singing your heart out as you watch them pour it all on the stage. This show really was the most incredible to be a part of!”

Julia Johnson, 18, said, “COIN was incredible! This was my first time seeing them in concert and I waited 2 years for this show. Their performance was flawless and they all work so well together! You can tell that they absolutely love what they do and love their fans so much. Valley was also really fun! Both bands were incredible. Going to this concert was a dream come true!”

After the show was over I was able to meet Valley’s frontman with some other fans and he said even before the show started he could tell Chase was energized for the show and had the jitters. He just needed to let it all out! He knew it’d be a good show before they even came on and  I just love knowing that information.

Well, there you have it, we need COIN AND Valley back ASAP!