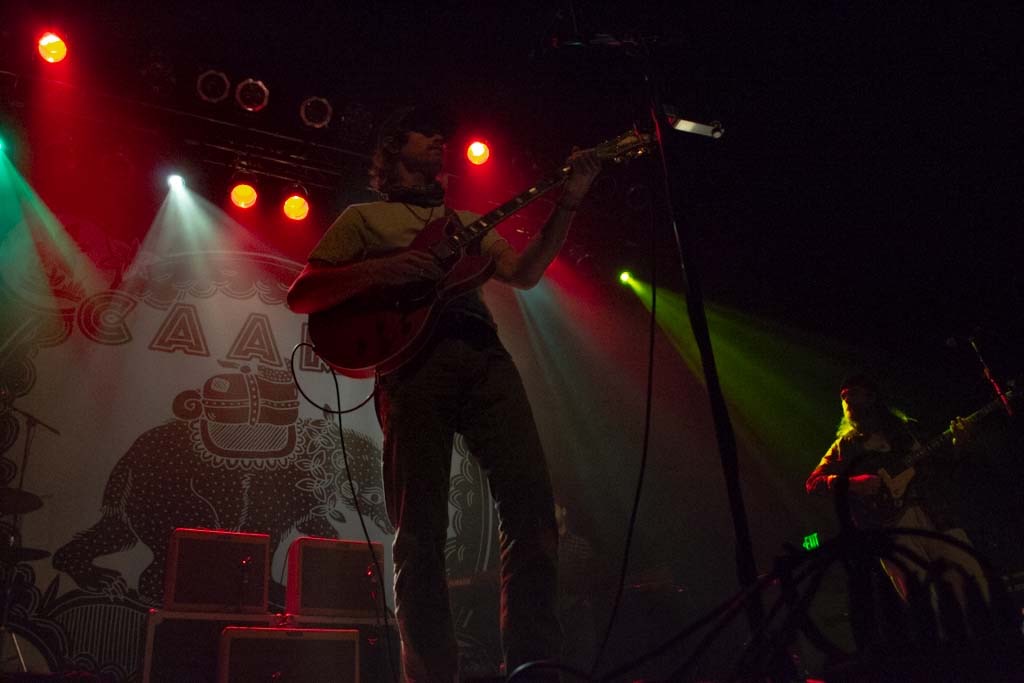 “Mind Games” by John Lennon brought the house lights down and Caamp onto the stage at The Depot in downtown Salt Lake City. The space was jam-packed and an unscientific analysis might reveal a correlation between flannel and sold-out shows, given the looks of the crowd. There were so many people throughout both levels of the venue that not only did it take security up until the very beginning of opener Futurebird’s set to process each person, but the sound of the cheers and shouts at the first sight of Caamp’s lead vocalist Taylor Meier far exceeded the maximum decibel level of the band’s subsequent performance. Meier began strumming “No Sleep” from the group’s newest release, By and By, joined by drummer Evan Westfall, bassist and harmony vocalist Matt Vinson, and keyboardist Joe Kavalec. After the room erupted in applause with the song’s conclusion, the group picked up the set with 2018’s “Just Wondering.” Vinson echoed Meier’s words, the crowd tagging along and bopping their heads.

Though the band was nearly 2,000 miles from home, they have certainly carved out quite a following on the slopes of the Wasatch. The turnout on a Tuesday night exemplified the success that is Caamp—they played to a sold-out crowd at Kilby Court in 2017, The State Room in 2018, and The Depot on their third album’s tour—a group that appeals to the wanderlust sparked by the best of old country lyricists and the foot-stomping riotousness of modern indie-folk such as The Lumineers or Mumford and Sons. Caamp does feel a little bit different from these mega-groups, possibly a result of mixing the Columbus, OH zipcode with Meier’s gravelly voice and Westfall’s banjo skills.

After covering Houndmouth’s “Penitentiary,” Vinson’s steady thump carried over to the next song of the set, “Moonsmoke,” sounding a little bit like Middle Kids’ “Lost Friends” and The Shins’ “New Slang” combined. When Westfall took his spot before “Vagabond” at the kick drum at the front of the stage, the crowd cheered wildly—everyone seemed to know what was going to happen next. The energy generated by the superb banjo picking translated to “Books” and “Penny, Heads Up,” during which the entire room sang along.

There was no time for banter as the group breezed through “So Cool” and “I Keep Going” with ease, literally just keeping on going with the vigor of a band that certainly did not seem like they were on their 21st stop of a nationwide tour. With 2016’s “Misty,” Caamp hinted they were going to slow things down a bit, leading to the only time the crowd wasn’t hollering and jumping with the beat. Strumming to the shouts and applause after “Misty,” Meier told the venue they were going to play a couple more. The entire room instantly recognized “Strawberries,” which brought bar chatter to a halt and saw Meier’s vocals wind their way through the crowd and back up to him as the crowd sang softly along.

The crowd participation got a little wilder with “Hey Joe,” everyone yelling the lyrics: I GOT ONE MORE QUESTION / HOW DOES IT FEEL TO SPIT THAT LOVE INTO A MICROPHONE? Westfall’s strumming encouraged the audience to keep going with “26” from Boys (Side A). The song perfectly followed up “Hey Joe,” riding the wave of shout-able lyrics with motifs such as gas running out and books on the shelf. Driving through West Virginia began “By and By,” rounding out the night with a final geographic nod to the mentions of Nevada, Alaska, Arkansas, and Big Sky that had earlier embellished the set.

Much to the audience’s approval, Meier briefly took a seat at the drums and Westfall took up the guitar to play an unreleased track and “Going to the Country,” a sweet n’ twangy southern-rock end to the main performance. Following the cheers and applause, the group’s encore included “All the Debts I Owe” (which included much more singing along) and “Mockingbird Song,” which could almost have stood on Westfall’s incredible banjo alone. Breakin’ rules, train tracks, candy, and cigarettes were the lyrics among the anthems of the night—songs clearly meant for playing in sunny wide-open country or pouring out of swinging porch doors…but also just right at home inside the walls of an old railroad depot on a cool November evening.