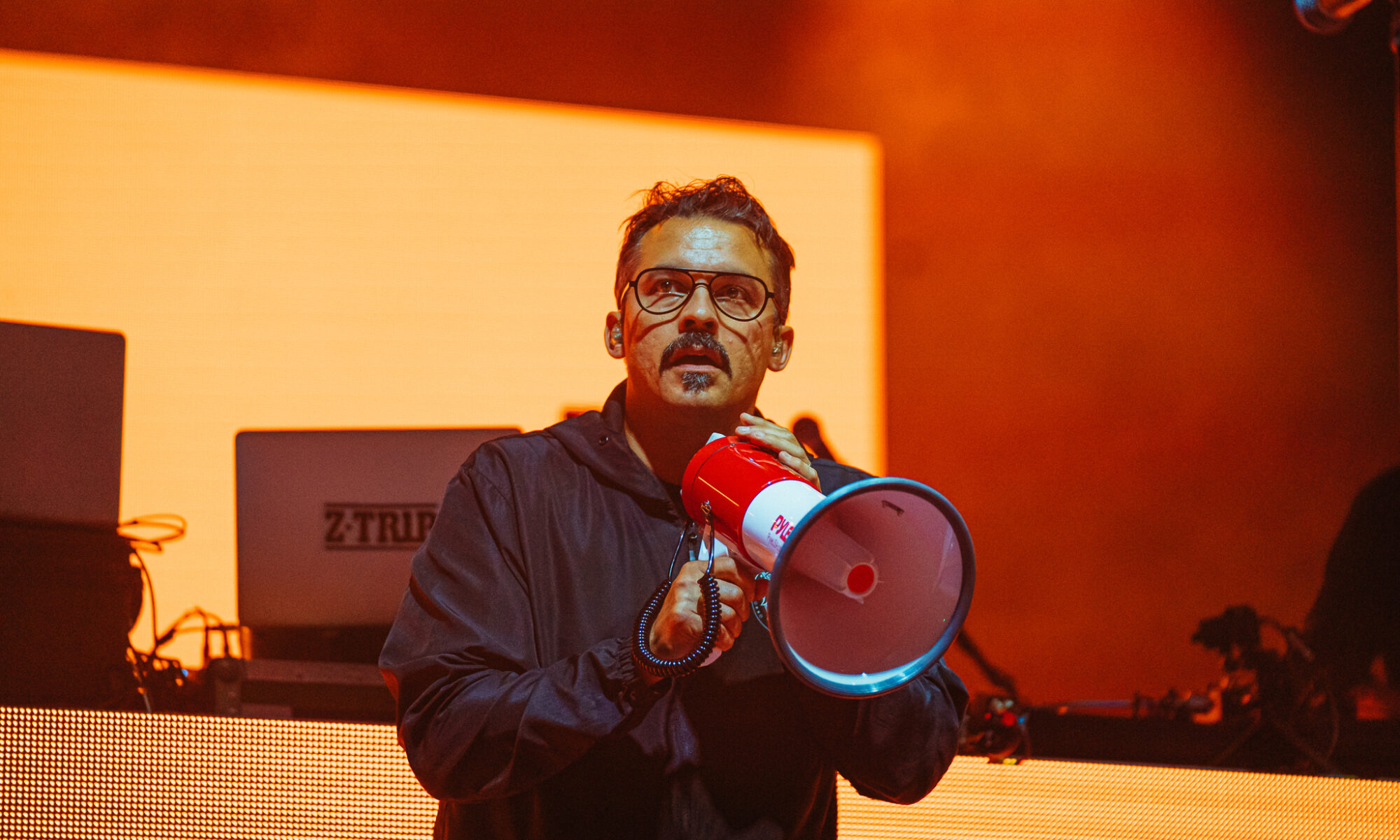 I’ve never been to a concert at the U of U Health Plaza at Rio Tinto Stadium before, located in Sandy Utah. But on Friday August 27th, they had the perfect lineup for an absolutely amazing outdoor concert experience. With it being 18 months since the last Atmosphere concert in Utah, fans lined the corner of the stadium with anticipation to start the night far before doors opened. I had a mishap with my ticket but the staff was incredibly kind and resolved the issue quickly just in time for me to enjoy the first set performed by the amazing Z-Trip.

Z-Trip was a perfect opener. He remixed multiple songs that were written by the Beastie Boys, Snoop Dogg, and many other renowned artists. It was the best way to start the night off and get everybody in the perfect mood to party. The best part about Z-Trip is that he does all his mixing in live time with actual vinyl records on a turntable. On top of that, his stage presence had the entire crowd on their feet having a great time. Z-Trip set the energy perfectly for Cypress Hill up next.

You could feel the crowd’s anticipation as they all gathered toward the barricade. There was a grass area where fans could sit down and enjoy the show but as Cypress Hill got ready to get on stage I don’t remember seeing a single fan sitting. With the growing smell of marijuana smoke in the air, you knew it was just about time for the group to come out. I grew up listening to these guys due to the fact my parents loved them, so it was an absolute honor being able to get the opportunity to review and photograph their set.

I was incredibly excited to see them take the stage. As the crew revealed the drumset and DJ station, which were colorfully decorated with Cypress Hill insignia and marijuana plant decorations. The crowd saw them and immediately started cheering at the band which hadn’t even got to the stage yet.

Finally, B-Real and Sen Dog ran onto the stage along with Bobo and DJLord and began to play their first song. The crowd was going absolutely nuts, jumping in unison with B-Real as he and Sen Dog took turns passing around lyrics. The fan reaction was refreshing to see. They chanted back lyrics as the two went on. It was an absolute trip seeing the waves of hands bounce to the beat in the crowd. The second B-Real had his hand up waving and jumping up and down, the entire crowd was right there with him.

It wasn’t long until B-Real asked who had the best weed in Utah. As he said that, he transitioned into the song “Dr.Greenthumb”. Moments later he was dual-wielding a mic and a joint. I’ve never seen it done before on stage but I was glad the first time I saw it was at a Cypress Hill concert. As the song continued I looked over and the entire crowd was covered in smoke. Clouds of marijuana emerged from different sections. It almost looked like mini bombs were exploding over everyone’s heads.

The group went on to play “Hits From the Bong” extending the lifetime of the marijuana cloud. Once the crowd was ready to party, they continued to play an amazing set full of their best songs like “Lowrider”, “I Ain’t Goin’ Out Like That”, and “(Rock) Superstar”. Their set had the entire crowd jumping the whole time. Everyone knew how to party. Then they played two massive hits “Insane in the Brain”, and “Jump Around” by House of Pain. The crowd was immediately put in just the right mood to get stoked for Atmosphere!

Before Atmosphere came on stage we were treated with another set from Z-Trip, as he called it his “Side-B” to his earlier set. Once again mixing classic songs from artists like “Rage Against the Machine” and even “Metallica”.

a Rising excitement came from the crowd as the crew was preparing the stage for Atmosphere. While we were waiting I got the opportunity to ask my parents how they felt about the concert. “I grew up listening to Atmosphere and this is my first time actually being able to see him live. So I couldn’t tell you how excited I am to be back in crowds and being able to experience this. I’m glad to have crossed this off my bucket list.” My dad said. It was definitely an unreal experience being able to share seeing him live with my parents for the first time, I was super excited for him to take the stage.

Starting off strong with his hit song “Puppets” Atmosphere came in with pure excitement to see the crowd. Every fan had their hands up, bopping to the beat and singing along with him. Slug has an amazing stage presence. Every fan was invested fully into the music, and he went all out. Atmosphere performed every song beautifully with high-quality production to his set. Once he finished his first song he stopped for a brief moment and he looked amongst the crowd and said “Hey Utah, this isn’t fair. It sounds like you guys are trying to steal my job!” It was absolutely amazing to see the crowd’s response to his performance.

“I missed you all! It was about 18 months ago since I’ve been here last and I miss this energy. Not only did I miss performing shows I just missed the energy from these types of crowds. Bodies swinging and crowds chanting in unison. This is the stuff I missed, I’m so glad to be back and with that. I’m going to make this the best day of my life.” Slug said as he transitioned into his hit “The Best Day” which got the crowd going crazy.

The night continued on with the same hyped up energy. To finish the night with a bang Atmosphere said “ I have a baby to deliver but before I go, I’m going to spit a freestyle right here. Is that okay with you guys?” Every fan started screaming, then he proceeded to come up with a freestyle about the night and SLC. Eventually, the DJ cut the track and Atmosphere left the stage ending the night in a perfect finale.