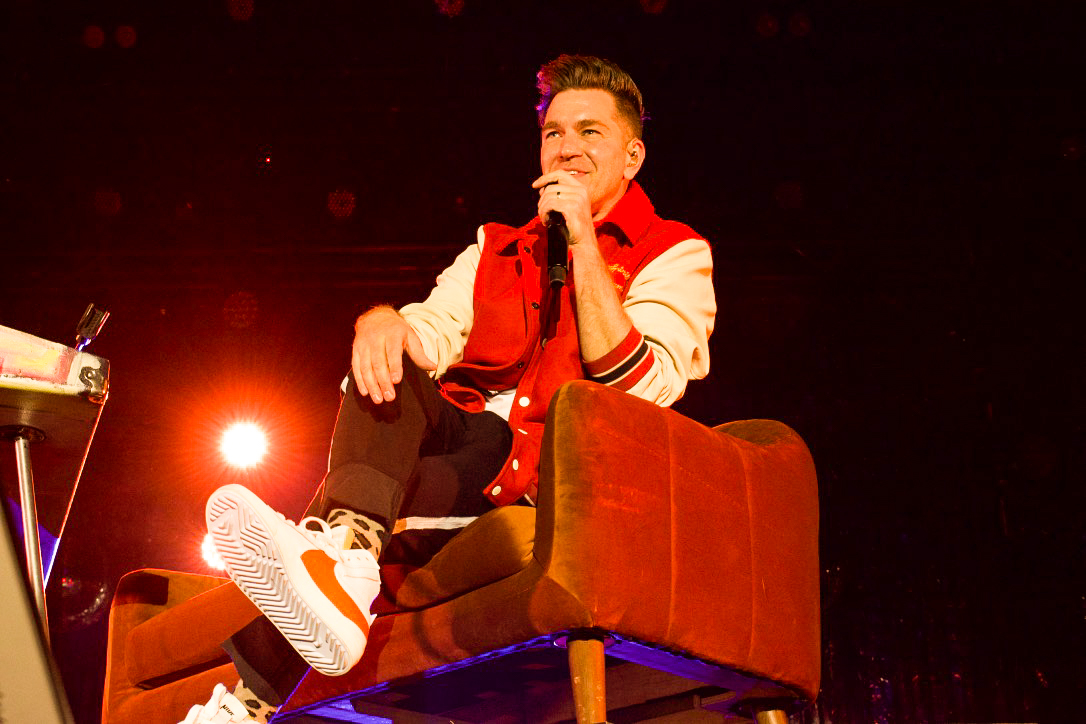 Review and Photos by Ellie Powell

On February 23, Andy Grammer took his “The Art of Joy Tour” to Salt Lake’s very own Rockwell at The Complex! I love going to shows there, so it was fun to be able to go again. So I made sure to get there a few minutes before the show started. I was lucky enough to have a smooth check-in. It was rather difficult due to the numerous people that were filing into the room, but I made my way up to the pit. I met some of the other photographers and talked with a few of the audience members. (if you were one of the fans that I spoke to, hello!). There was one fan that was experiencing a concert for the first time!

Alt Bloom opened for Grammer, and their fans made sure to show up! Cheers and singing rang out from the audience. There were also some cheeky shouts as their jackets were removed.

There was an important moment for Utah fans. It was when the singer stopped during the show and said, “We were thinking Minneapolis was going to be the best show, jeez!”. This was obviously met with a lot of proud cheers in response! During their performance, the audience happily responded to the band’s requests of dancing to their songs. (“swing your arms to the left and to the right”).

They also sang “Fly Away” by Tom Petty. They explained how the last 2 years had been really rough on them. This song was full of waving phone flashlights from quite a bit of the audience, which was well-deserved. Overall, they did a fantastic job on their show. It was really enjoyable and definitely helped liven up the crowd for the rest of the night.

The whole set was full of interesting transitions between each song, and the stage setup was really fun. There were streamers hanging from the back wall. And a lamp and couch on a raised platform in the center of the stage. Grammer himself was a very charismatic performer, dancing up and down the stage and interacting with his bandmates.

Before the show started, someone came out on stage with a poster board with a QR code. It led to a number that fans could use to contact Grammer directly! Phones immediately came out from fans all over the room, (including some of the photographers) in order to save this number.

Deafening roars from the crowd shook the room as Andy walked on stage in the dark, up to his microphone. A light highlighted him as he began reading a poem. Which led directly into his opening song “Damn It Feels Good To Be Me”.

Similar to his opening band, Grammer talked about how it was difficult to be a touring musician at home for the past 2 years. He mentioned how it must have been difficult for his wife as well. Before starting his fifth song, he had explained that it was written about his daughter. About how she was born during the quarantine at his house, and how special that was.

His introduction to his song “Love Myself” was obviously very touching for a lot of people. He explained how he had struggled with self-love in the past. Grammer decided to write this song not only for himself but for those who listened to it. He mentioned how he was going to therapy, and how he felt awkward writing it. So he encouraged the audience to belt out the bridge of the song with him.

“Love in the New Money”, a new song that he introduced, was preceded by another poem with the line “I’m not an economic unit, I’m human” repeated frequently. This song was especially important at this show because the audience was going to be recorded for his new album! It was really exciting. He had the whole crowd sing by ourselves at times in order to get a good sound, So Salt Lake City fans are sure to watch out for whenever this song will be released! I certainly will be!

Plenty of cheering followed the intro for “Keep Your Head Up”, arguably one of his more popular songs based on audience reaction alone. Grammer played the piano while his guitarist played an incredible solo. He requested that we finished his sentences, shouting “do it Salt Lake” for some encouragement.

Following this song, he asked the crowd to record two different TikTok videos for his account which were to be posted the next day. It was really fun watching him interact with the audience like that, this was the first time that I was at a show where a TikTok was made by the performer! He had also dedicated another song to some newlyweds that were in the audience and stated that he loved Salt Lake.

After performing a cover of “Pennies from Heaven ” by Louis Prima, “Hallelujah” and “Lease on Life ”, each song met with screams and happiness radiating from the crowd, Grammer gave another poem dedicated to Joy and his family. It was a sweet moment, and I cannot come up with another artist who I have seen give spoken-word poems during their set.

Andy Grammer gave an entertaining, energetic performance that left people entranced and fully enjoying themselves. The setlist was very well-curated and kept the packed house engaged. After his final few songs, I am confident that fans were more than satisfied with his performance and eager for his future return to Salt Lake (as well as hearing their voices on his new album).