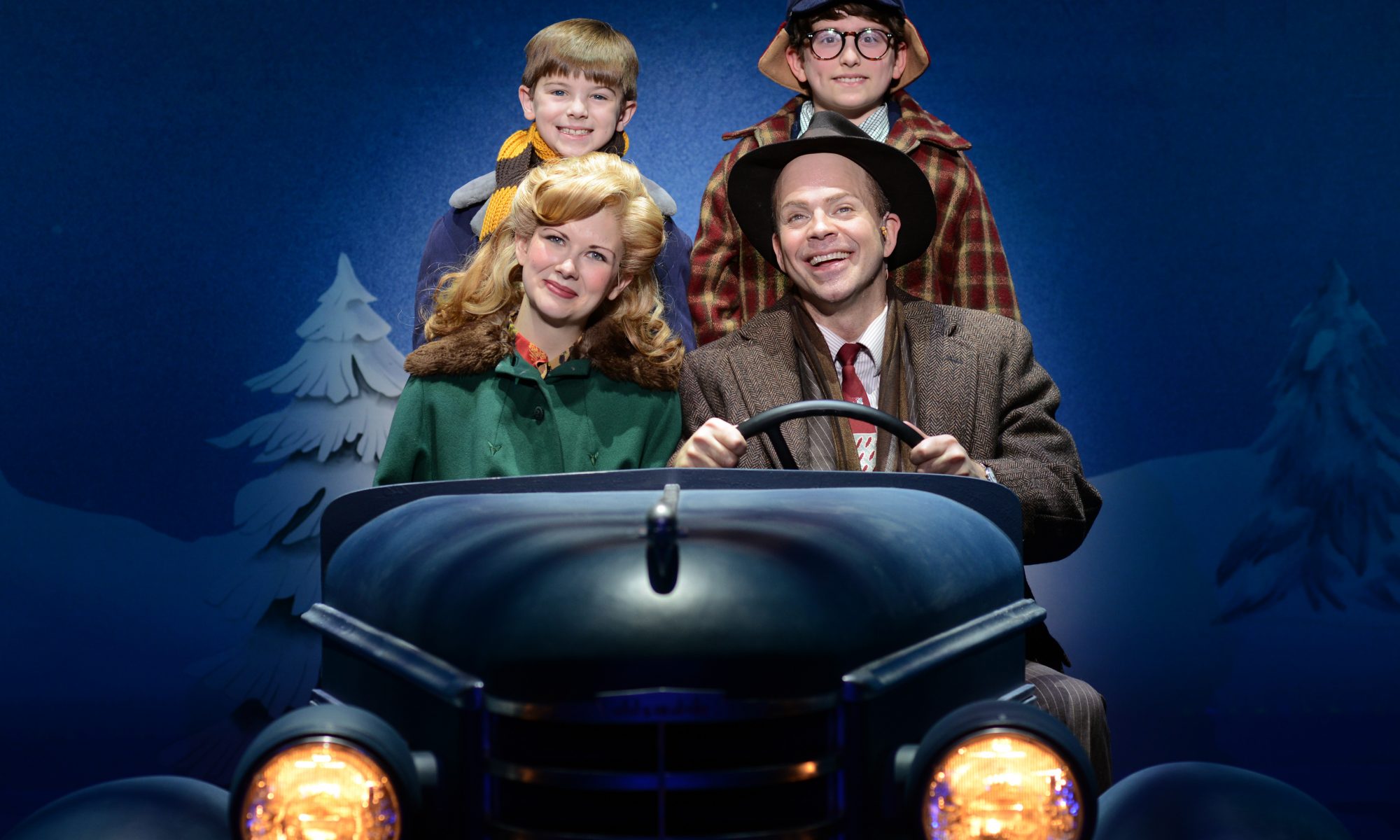 It amazes me that anyone would try to take a classic movie, turn it into a musical and put it on the stage.  It seems like there would be so much pressure! I think about a show like Hamilton. No one thought, “This production is never going to be as good as Ron Chernow’s book”. It was given the chance to be heard and eventually loved.  But producing a musical based off of the motion picture A Christmas Story, a movie that is a viewing must, a yearly tradition for many families seems really challenging.  If you’re going to go for it, then you’d better make it good or it will bomb harder than Dance of the Vampires.  Well, it would appear that the creators of A Christmas Story, The Musical had the right vision in mind.  Because this show, which, for understandable reasons, only ran during the holiday season and was still nominated for three Tony Awards, including Best Musical.

The movie, A Christmas Story is not a holiday tradition for me.  I’ve seen it. Many times. It’s pretty much impossible not to see.  However, I don’t make a point of seeing it every year like I might for other holiday movies.  So I felt pretty open minded as I entered the theater. I could hear the people around me asking who had seen the movie and then discussing their levels of devotion to it.  Some questioned why they were even there, feeling like it would never live up to the film. Others weren’t sure if they’d like the stage version because they never really cared much for the movie.  Some just mentioned that they had heard good things and were hoping for the best. I liked that attitude.

I think the selling point for me with A Christmas Story, The Musical was the team that wrote the music.   Benj Pasek and Justin Paul were not household names when this musical debuted in 2011. But after all the acclaim and notoriety that came from La La Land, The Greatest Showman, and Dear Evan Hanson, all I need to hear is “Music and Lyrics by Pasek and Paul” and I was there.  The music absolutely did not disappoint. And putting it in the context of being written before their other huge compositions you can see they were on their way to great things.

The beautiful thing about A Christmas Story, The Musical is the way they hit all the beats of the movie and yet still created their own unique version.  Yes, there’s the BB Gun. And the pink bunny jumpsuit. The tongue on the flagpole. And who can forget the leg lamp? It’s all in there. But they present all of it in their own funny, theatrical way.  Starting off with Chris Carsten who plays Jean Shepherd, Ralphie when he’s older and the one who narrates the story. He takes the stage as if he’s about to go on 1940s radio and give New York City his Christmas Eve story.  Carsten has a warmth that immediately draws you into the production and sets the tone for the rest of the evening. He has a voice for radio and a friendly face that makes you wonder, “Do I know that guy?”

The thing that blew me away the most about this production was the children.  The talent within this cast is unbelievable. And it begins with Ian Shaw who plays the show’s main character, Ralphie.  I’m not sure how old Shaw is, but if I had to guess I’d say around 11 years old. But even if he’s 12, or 13, or even 14, for someone that young to have that big of a part in a professional touring production totally blows my mind.  Not only could he sing, but he could dance, he was funny, and his acting was so natural. With a young actor, you might get one of those and you’ll usually be forgiving if they aren’t at a high level on any of it. Where Chris Carsten sets the tone and warmth of the show, Ian Shaw sets the pace and personality of this production.  That’s a lot to put on a kid, but he did it spectacularly. I laughed at many of his takes on famous lines and scenes. In the big dream sequence where Ralphie imagines how much good he’ll do in protecting others with his BB Gun in “Ralphie to the Rescue”, Shaw is all over the place. He’s running, climbing, and dancing while singing and really carrying that big production number.  I was really impressed with him.

I really enjoyed Briana Gantsweg as Mother and Christopher Swan as The Old Man.  I thought they had great chemistry together and brought a fresh take on Ralphie’s parents.  Their portrayal of these characters fit the era the story is taking place. I loved Swan’s performance in “A Major Award” when he “wins” his infamous leg lamp.  I was happy to see Gantsweg have her moment to shine as well when she sings the beautiful “Just Like That”.

I felt like this production deserved a little more from the audience.  They were a little flat. Big jokes that I would imagine always kill got chuckles and even big numbers were treated with polite applause.  A man who works on the production even asked me at intermission “Are we doing ok? Does it look alright?” I assured him that the show was great and that I attributed the lack of energy to the mostly older crowd.  During the intermission and after the show I could hear people use words like “It’s cute” or “I’m really enjoying it”. So the audience did enjoy it. And I felt like the energy from the crowd picked up in the second act.  Their chuckles turned into belly laughs and their claps turned into loud applause. Sometimes that’ll happen in a mid-week show. I fully expect these weekend performances to be really well received.

I thoroughly enjoyed A Christmas Story, The Musical.  The music was great, the cast was great, the big production numbers were really fun and the musical as a whole was really well staged.  The thing I liked most about the stage version is how heartfelt the story is. That is something that is lacking in the movie, but the stage version is all heart.

A Christmas Story, The Musical runs at The Eccles Theater through December 8 with two matinees on the 7th and one on the 8th. Click here for tickets!