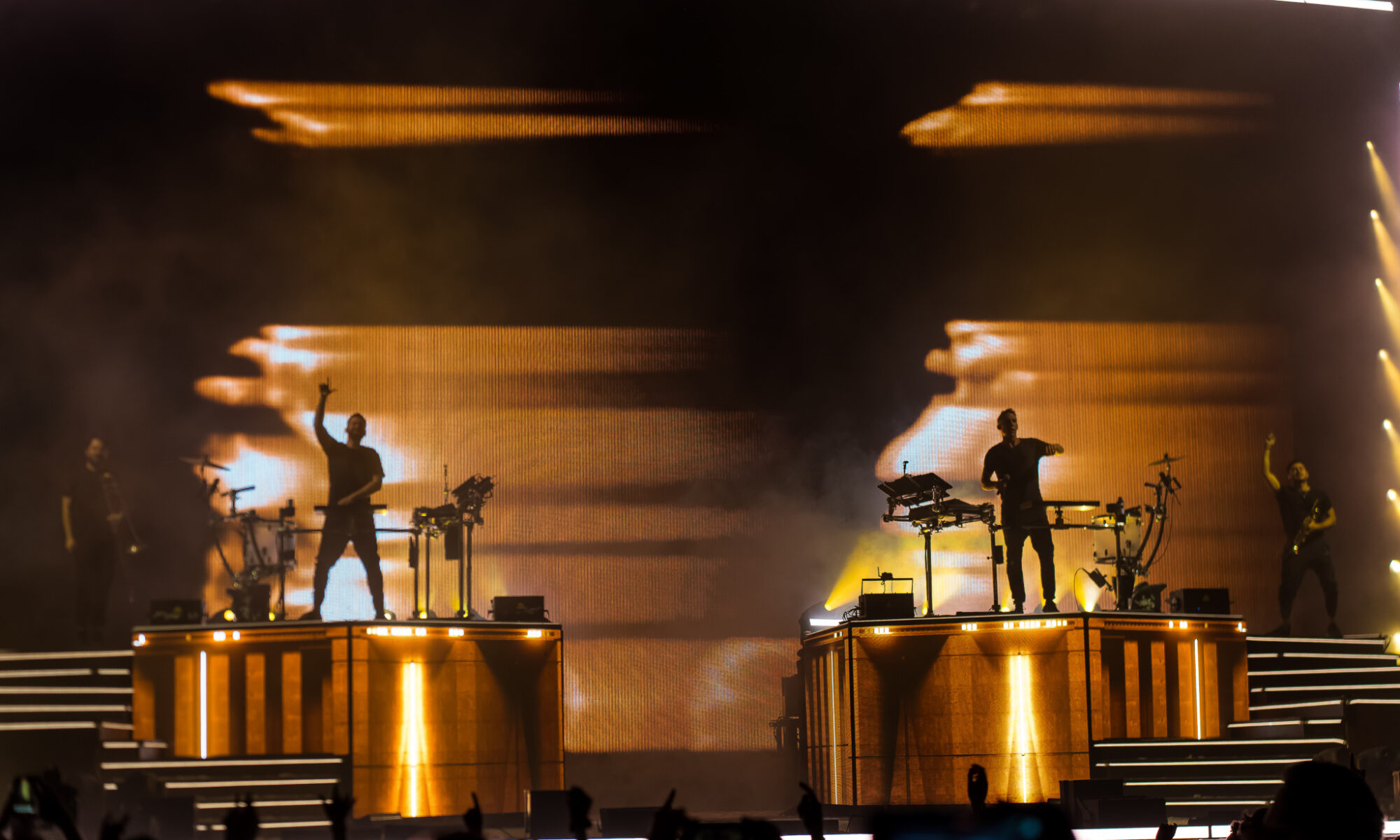 Reviewed and Photographed by Eli Valle

Almost close to nothing beats a good summer concert for any music fan. A nice summer breeze, 80-degree weather out in the open with a slight breeze here and there, and great live music. As thousands gathered at USANA Amphitheater on September 20th  for the “ODESZA: THE LAST GOODBYE TOUR”, one thing was clear, Utah was going to show up and party. Even on a Tuesday night. Along with headliner ODESZA, the tour brought NASAYA, Elderbrook, and duo Sylvan Esso to sing and dance with the crowd. All and all, the lights went on until they could no longer run. And the audience left with their minds blown.

The first to open up the evening was NASAYA. He brought out his midi pad, funky beats, and guitar to entertain the crowd. NASAYA started off his set so hot that his system began to overheat a couple of songs into the set. A crew member needed to bring ice to cool his system down. Even if there were reflective sun tarps on the equipment. Could it have been the fact that it was still pretty toasty at 6:30 pm? And the sun had been hitting his equipment for a couple of hours before his set? Or that NASAYA’s punch was too hot to begin with? Frankly, I would like to believe the latter in this scenario.

Despite the technical difficulties, he did not skip a beat and he did not let it bring him down. As the masses began to grow for the night, so did the momentum for the rest of the performers.

To the thousands who had shown up to USANA by then, Elderbrook was there to welcome them with his vibrant vocals, skills on keys, and his midi pad as well. For being a solo artist on stage, he sure presented himself well. His video displays relied heavily on a space concept with all sorts of moons and outlines of two individuals and the word “FRIENDS” demonstrated themselves all throughout the clips. Thankfully for him, the sun was starting to set. So he did not have to cool down his system, unlike NASAYA. He played well into dusk as the sun disappeared for the evening.

As more and more people arrived at the venue, the range of outfits also grew exponentially. If you were to look at the crowd as a whole, you would not be able to tell what the event was. Some folks were in casual wear while others were in full “rave” wear. Outfits consisted of fishnets, flashy bodysuits, platform boots, and lots of glitter. As mentioned before, the EDM community is no place for judgment. Self-expression is always celebrated so this was the place to wear whatever makes you feel the best. Although it started getting chilly and temperatures quickly dropped, the drinks kept flowing and the dancing was the key to staying warm.

Up next was electronic pop duo sensation Sylvan Esso who consists of main singer Amelia Meath and producer Nick Sanborn. Sanborn was on stage left with all of his equipment as Meath pranced around all over the stage. Amelia danced on stage from left to right with nonstop high jumps and high kicks. She was dressed in an all-black two-piece that appeared to fit her like a glove. Simultaneously singing along to every song on the setlist. Her breath control was showcased by her movements on stage. And her ongoing ability to sing and stay on key without taking an extra moment to breathe. For the full 45 minutes!

As the lights strategically followed and bounced off Nick and Amelia, the anxious yet excited crowd knew who the next and final guest of the night was. As hyped as everyone was, little did anyone understand what we were all in store for next.

Touring their latest album, The Last Goodbye, ODESZA was finally performing again. To an ODESZA fan, their hiatus might have felt like an eternity. Especially if you count 2020/pandemic shutdown time. The year that felt like a blur for many but if you identify as somewhat of a casual listener, the past five years of hiatus might have not felt as long to you. Their last album, A Moment Apart was well-received, thus the anticipation for this new album live was extremely present and many fans were also hoping to hear some of ODESZA’s classics too.

As the house lights completely turned off and everyone’s attention was drawn to the stage for ODESZA’s opening, multi-color visuals took over the screens and you could see two separate stands where you could expect to see the Washington state natives, Harrison Mills and Clayton Knight. Each of their stands had a drum, microphone, and midi pad set up for them to perform on. As the bass started to make its way from the general admission pit at the front of the stage and all of the way to the very back of the lawn, the thousands of concert-goers were sure of one thing and that was that they were ready to sing and dance all evening long.

ODESZA’s show was full of pyrotechnics and literal fire on stage that combined with dramatic HD visuals on screens both on and to the sides of the stage at the amphitheater. Along with Mills and Knight came a multi-person drumline and on-tour band to help keep the music going. Early on to their setlist, they pleased the crowd with one of their fan favorites “Say My Name (feat. Zyra)”, and kept riding the energy from there on out. The bass was heavy, it was one of those shows where if you did not have earplugs, your ears would be ringing for at least 24 hours but it is still the show where you get the biggest smile just reminiscing how fun it was.

Every few songs, the duo would leave their areas and come down to the main stage. They would either play the piano or mess around with their midi pad for the next song.

Beat after beat and song after song, folks of all ages grooved along with the duo well into the night and continued to cheer ODESZA on before they came out one last time for their encore song  “The Last Goodbye (feat. Bettye LaVette)”. As the final notes played, the crowd was surprised by a shower of square pieces of confetti that had ODESZA’s famous geometric shape logo on them. The flashing lights, the video backdrops, every snare drum hit, vibration, and every set of notes were lived up until Mills and Knight lined up with the entire drumline and band and bowed one last time on stage, and then exited off the stage for the night.