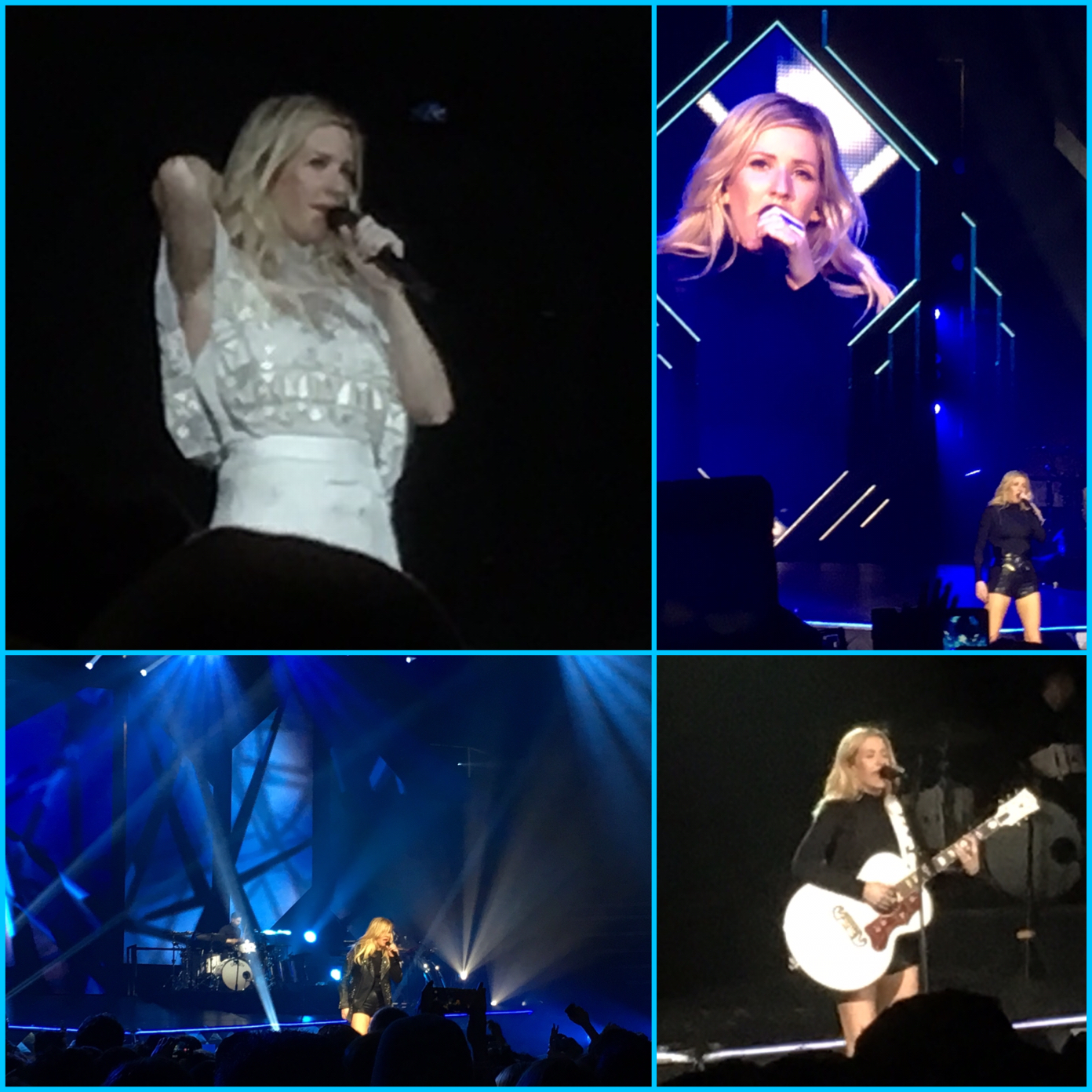 A couple of years ago, Ellie Goulding came through Salt Lake City and performed at the Saltair.  Well, for some reason, I didn’t know about this until after she had already come and gone.  I was really disappointed because by all accounts, I have heard she puts on a great show.  I hoped she would one day return to Utah.  You never know what artists are going to make Utah a regular stopping point, or whether they come here and never return.  So I was excited when I heard Ellie was in fact returning, and this time she’d be playing the Maverik Center.

The venue wasn’t quite sold out, but I’d say it was about 85-90% full.  Not too shabby in my opinion.  I was able to get down on the general admission floor, and without having to be one of those rude obnoxious fans that get there late but still try to push their way to the front, I was able to get a pretty good spot.  As most of you know, the Maverik Center is the home arena to the minor league hockey team the Utah Grizzlies.   Well when they are still in season, from what I gather, the stage can’t be set up on the main floor, because ice is still underneath.  So the stage is set up deeper into the end of the venue, which makes the GA floor enormous!  This might sound like a good thing, but I don’t think it is.  While there were thousands on that floor, because of the way things are set up, the floor is only half occupied.  And the people sitting at the end of the venue in seats are really far from the stage.  Don’t get me wrong, I understand why they have to set things up this way, it just makes the venue more awkward and less concert friendly than it normally is.

Ellie performed about a 90 minute set with most songs coming from her latest album Delirium (Delirium world tour, duh).  Her band consisted of three backup singers, a drummer, and three versatile instrumentalist moving from guitar to keys depending on the song.  She also had four male dancers who did everything from dance fight, to help set up staging for the show.  The entire ensemble were really talented and added to the show.

Some of the highlights for me were hearing Ellie sing one of her biggest songs “Lights” in a really stripped down version.  It was basically just her and a piano.  While some might have wished to hear the original, I thought this was a great showcase of her unique voice, and a really special moment in the show.  The best moment in my opinion came when she was about to sing the last song of her main set “Burn”.  This is a huge song for her, and it was obvious the crowd was anticipating this song, and excited it was time to hear it.  But before this song was performed, Ellie asked the crowd ever so politely to put away their phones.  She said that she didn’t want to see their phones, she wanted to see their faces.  And I would say about 99.9% of the audience granted her her wish.  You always have to have those selfish phone users who don’t care whether they’re in a movie, a play, or even if the artist you came to see asks you to just be in the moment. They’re just going to use their phones anyway.  But most people followed the prompting, and it was a really cool moment in the show, and probably the highlight of the evening.  It took me back to when there were no cell phones, (I know I’m old) and we just had our memories to rehash later about what we had seen.  I’m guilty of using my phone at concerts.  That’s why you have pictures and video footage of the shows I review.  But I must say it was nice to just be in the moment for once.  Nice move Ellie.

If you haven’t seen Ellie Goulding, or listened to her music, I encourage you to give it a shot. Her voice is very unique and her songs are great.  She is a true talent.  I really hope she comes to see us again.

Encore:
Anything Could Happen
Love Me Like You Do