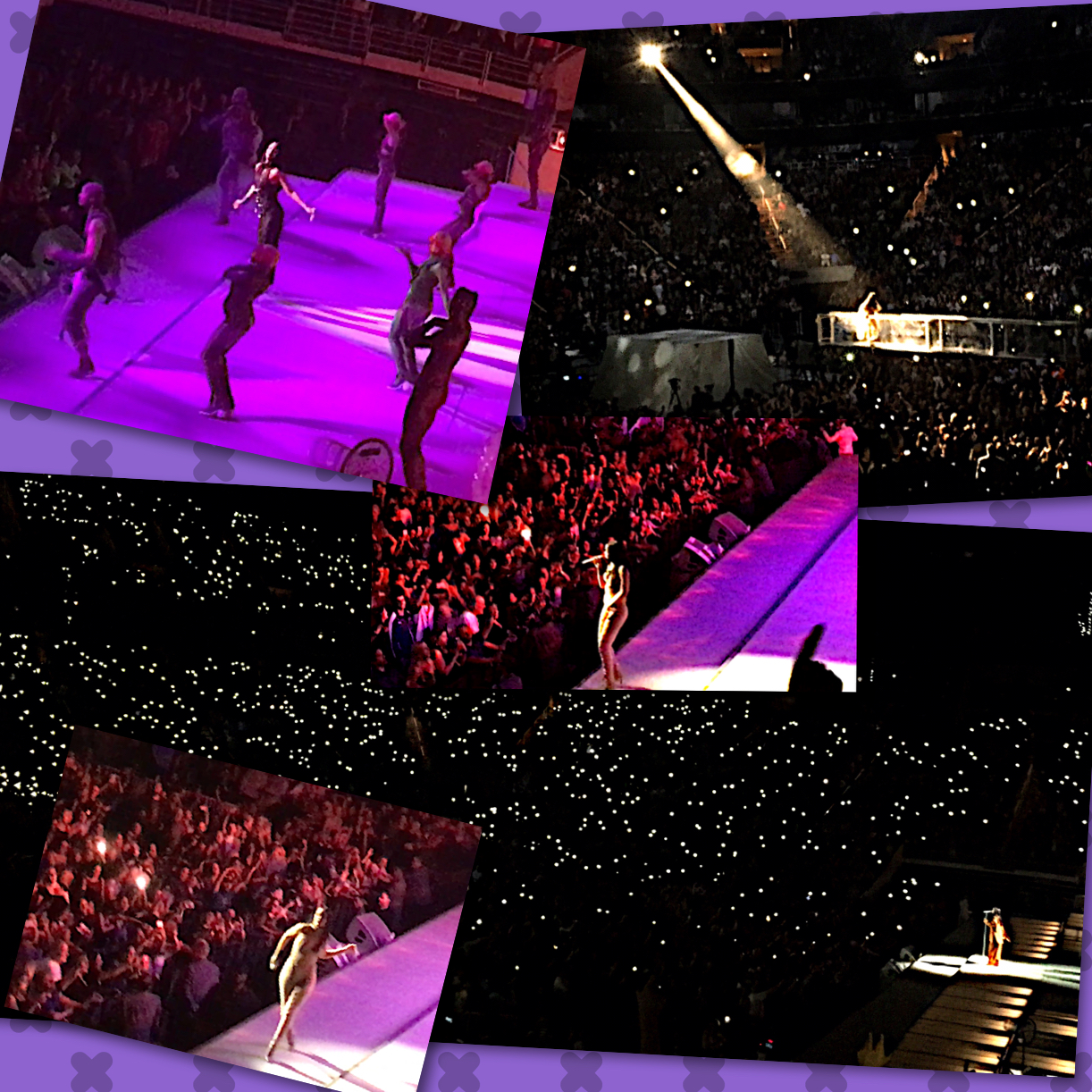 Today, I’m very thankful to Instagram.  Let me explain.  So, I’ve wanted to see Rihanna for a while now, and here she was performing in downtown Salt Lake City, practically my backyard.  But somehow, I couldn’t find anyone who wanted to join me.  Don’t get me wrong, I have gone solo mission to a number of concerts, but Rihanna seemed like a show that needed to be experienced with others.  So I gave up, and figured I’d be spending the evening watching TV and wondering how the Rihanna show was.  Well, as I was sitting there on my couch, I was looking through Instagram and I saw that a couple of my friends were at Vivint Smart Home Arena about to see the very show I was about to miss.  I “liked” their picture and thought ‘They’re so lucky!’.  Well, one of them saw that I liked her post, and remembering that I liked Rihanna, she quickly text me saying “You here?”.  I of course said that I wasn’t.  She told me they happened to be downtown and just decided to buy tickets and go.  She suggested that I should get to the arena because there were still tickets available.  I mulled it over for about 1 second and jumped in my car and raced downtown.  Keep in mind, the time was 9:15 P.M.  My friend had informed me that Rihanna hadn’t gone on yet.  I figured I had 15 minutes to get to the venue before she took the stage.  Right as my ticket was handed to me, I heard the roar of the crowd.  I did it!  I had just made it.  I speed walked to where my friends were (pathetically out of breath when I got there), and my luck continued, there was an open seat right next to them. Now finally, to Rihanna!

The show opened with Rihanna on a raised stage on the opposite side of the venue from the main stage.  She was hooded in a white robe singing her huge hit “Stay”.  The crowd was really excited to see her.  I don’t know if she’s ever been here and if so, it’s been a while.  So the crowd was really thankful she came through Salt Lake City.  After her opening song, a bridge dropped from above.  Rihanna performed a couple songs on the bridge as it moved across the arena taking her to the main stage.

Most of the set consisted of songs from her album ANTI.  The rest of the set was pretty evenly spread out over her other albums.  Her band consisted of two percussionists, three keyboardists, a bass player, and a guitarist.  Along with three back up singers and six or so dancers, the stage was full and yet at times it felt like an intimate setting. There weren’t too many thrills with the stage.  At one point huge inflatable… well, I don’t know what they were,  let’s just call them stage props, showed up for a while then were gone.  I still don’t really know why they were even there.   Anyway, the band sounded great, the singers were a huge part of the show in that they finish all the lines and phrases that Rihanna doesn’t either due to dancing or crowd work.  The dancers were extremely talented and I really enjoyed what they brought to the whole production.

Something that I noticed pretty early on in the show, and ended up to be a theme for the entirety of the show was that Rihanna would only sing a short version of her big songs.  You’ll see here that Umbrella was only 90 seconds long.  With many songs I get it because she’s a featured artist on a rapper’s song, or the song was a duet.  But sometimes I’d just be getting into a song, and then it was over.  She has so many hits that at first I got it, I figured she was trying to get to all the songs but keep the show within 90 minutes.  But I was wrong.  She did do 25 songs, and she did keep the show to 90 minutes, but I’m guessing because she is promoting her ANTI album, major hits of hers were left off the setlist to make room for these songs.  I understand why that happens but I will say I was really looking forward to some of these songs.  I’m trying not to complain too much because I really did enjoy the show.

I think it has to be said that Rihanna is so sexy.  I hate that word, and I hope I don’t sound like I’m diminishing her musical talents because she is so talented, but damn, she has such a natural sex appeal that I found myself just totally captivated at times.  She claimed one time on Ellen that she was “just dancing” and that she didn’t get what all the fuss was about.  But maybe it’s our puritan American heritage, but the way she moved is not “just dancing”.  I mean, wow.  Ok, I’ll leave that there.  But I feel like it’s necessary to report that Rihanna’s sex appeal is still intact.

Most artists that I’ve seen always seem to have a tour that’s for them.  They’ve done the songs their fans want to hear, and they’ve done those songs a million times.  So there always seems to be a particular tour where they are going to do the show they want to do.  I think this was the case for Rihanna with the ANTI Tour.  As previously stated, a lot of major hits were left off the setlist.  While I wished I would have heard those songs, I can understand an artist’s need to do their thing.  There was no encore, which personally I hated.  We know they’re coming back, it’s all a big charade.  I get that, but it’s just part of the show.  That’s how it goes.  You leave, we clap and scream a lot, and you come back and do songs we love, and she show ends on a huge high.  With no encore, it takes a little luster out of the whole thing.  But that’s the way this show went, it seemed to start at its strongest, and progressively dip finishing out with two songs from ANTI.  Not how I would have wanted the show to end.  But people each have their own perspective on these shows.  Which is why I love sharing my reviews, but love hearing what others think of the shows.

Upon leaving the venue, my friends ran into someone they knew.  They asked him what he thought of the show, and included how disappointed they were with the last song.  And he said, “Really?! Kiss It Better!  I love that song!”  So there you go.  While we were a little disappointed with the finish, this dude loved it.  Overall I must say that it was a good time, much better than the night I thought I was destined for.  I really do want to see Rihanna again.