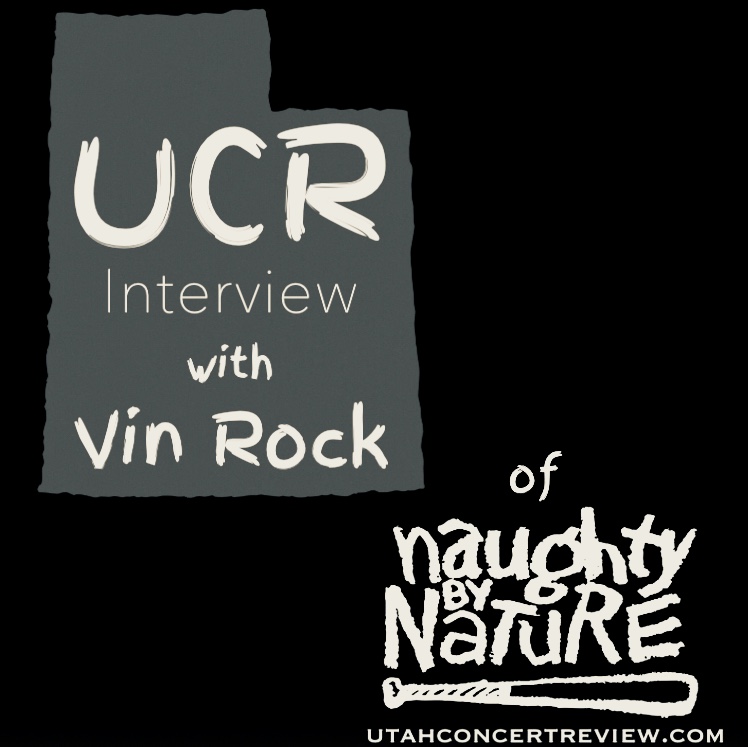 I can’t express what an enjoyable time I had at the Naughty By Nature show at Park City Live.  It’s an excellent venue to see this group.  If you haven’t been to Park City Live, I recommend checking out a show there.  I would imagine it’s unbelievable seeing shows there during Sundance Week.

The concert was great.  So much fun! They hit the stage and opened with “OPP”, then they gave all in attendance an education on the history of hip-hop.  They Sampled hip-hop legends like  Run DMC, Sugar Hill Gang, Tupac, and Biggie.  They paid homage to the best while mixing in their own chart-topping hits like “Feel Me Flow”, and of course “Hip Hop Hurray”. 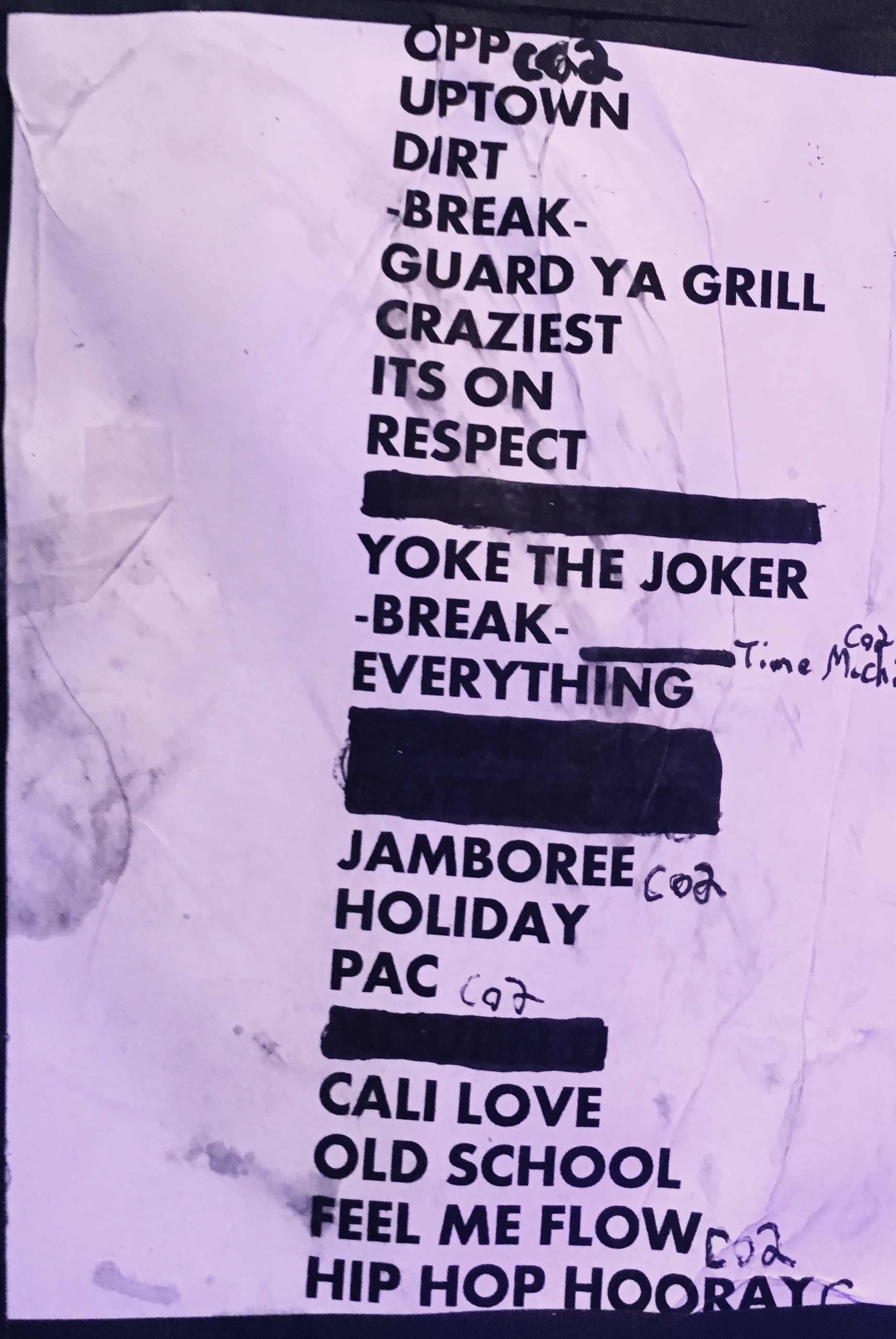 I had the opportunity to spend a few minutes with Vin Rock before the show.  Because UCR focuses on the live music experience, our conversation was focused in that area of his career.  He was really enjoyable to talk with, as were Treach and DJ Kay Gee who I briefly met.  Naughty By Nature’s tour management was extremely accommodating to the point that they pretty much rolled out the red carpet for us.  A carpet that escorted us to the stage for the final song!  Here’s the interview…

Utah Concert Review: Hey Vin, it’s good to meet you.  My name is Kevin by the way.

Vin Rock: What’s up Kev. My hood alias is Kev.  I’ll explain it to you.  When we used to be on the block, you know what I mean, the customers would come up and they would never really know your name.  So me and my partner who was out there on the fly, I was Kev, and he was Antoine.  So all the customers knew us as Kev and Antoine.  So if you’re ever intimate enough to be around our hometown crew, nobody calls me Vin.  They all call me Kev.  “Yo, Kev, Yo Kev, Yo Kev Kev”.  Cats will come up “What’s up Kevin?” And then people who are around are like, “Why are they calling you Kev?”  So that’ a  moniker that’s stuck around since the 80’s.

UCR:  Some might think, coming to Park City or Utah, in general, might be a random tour stop for Naughty By Nature, but it seems year after year you pack the club every time. Why do you think that is?

VR: Hey man it’s Hip Hop.  Hip Hop has been around for a long time.  It started in the hood it spread to the burbs it spread to, you know, every nook and cranny of America.  Then you have these pockets, like Park City Utah.  You have the Sundance Film Festival here, I mean this is a destination city.  So hip hop and culture period thrive here. And the hip-hop community here they just love it.  They love music.  They just love art period here.  You know what I’m sayin’?

UCR: Absolutely.  So Naughty By Nature has been doing this for almost 30 years now.  What is your secret to being able to stay successful and have the longevity you’ve had?

VR:  You know to me, music is all about the live performance man.  Minus the record contracts, minus the hype and hoopla, your average musician starts in their garage or in their bedroom.  You know? And that will never go away. The live performance will never go away.   So no matter where music evolves to, it’s the people who have those great live performances that will always thrive. And that’s the school we come from, you know?   We started in Kay Gee’s sun porch.  Rest in peace to his father Gizmo, man.  His parents let us practice on their sun porch on 18th Street.  And we practiced our routines, went out to the clubs.  We banged out with different artists.  You know, club for club, artist for artist.  And we developed a live stage show.  So, those were our bones. That’s the bones and that’s the crux of Naughty By Nature’s business.  You know what I mean? And then when we got put on and had the record deal and everything, just that live stage show always you know, always carried us. And here we are at Park City Live, right?  You know what I mean? So all the artists, and this is a jewel for any artist out there, you can do whatever in your bedroom.  But you gotta get out here in front of the people.  You have to perform live.  You have to have a reputation for performing live.  If you have that and God-given gifts of songwriting and musicianship, you never have to worry about thriving in this industry.

UCR: Was there a specific show where you guys realized, “Ok, we’re going somewhere with this.”?

VR: Yeah, yeah.  For one it was our first talent show in high school.  We didn’t even have a name for ourselves.  We scratched the Beastie Boys “It’s the New Style”, and we just had a freestyle routine but it went over so well that we called ourselves The New Style.  And then we switched our name to Naughty By Nature once we got hooked up with Flavor Unit.  But prior to that, when we did The New Style, we used to do a Tough Teen Talent Competition around the way.  So it was Club 88 and all the teens used to come in and compete.   So we used to always come in their with our crew and the crowd would judge who was the best.  We would win every week that we came in there.  So they switched it. And said, “You know, New Style comes too deep.  So we’re going to get judges.”  So the judges came and we kept winning amongst the judges!  We were the best performers!  And we were like “You know what, we really have something here.”  And that’s when we transformed from The New Style to Naughty By Nature.

VR:  I don’t see a lot of them but, you know, and I have to study more of the newer cats, but I definitely know that some of my veteran peers like no matter what DMX always gives a good live show.  And Redman and Method Man, they always bring it.  You know what I’m sayin’? They always bring it.  So that’s how I judge the new cats.  I don’t care because music is music and marketing is marketing.  You can always break a record.  Especially in today’s climate.  My thing is, what do they do live with their live show?  I’m gonna look more into that, into today’s artists to see who’s really bringing it live.

UCR:  I know people are dying to get you on that stage, so I’ll just ask you this one last question.  Is there a concert that Naughty By Nature has done that you look back and consider the best as far as performance, crowd, venue, etc?

VR: When we first came out, maybe ‘91, ‘92, I remember we were in Rhode Island, we did some arena date and we were red hot, brand new, just O.P.P. you know?  And I remember coming on stage and Treach had braids back then.  When we came on stage we used to stand still and say nothing, like Michael Jackson.  And I remember the crowd being so loud, that I saw Treach’s braids blow backwards!  You know what I mean?  And there was no music playing, no nothing. It was just the crowd going “Aaaaaahhhhh!!”  And his braids blowing backwards like a cartoon you know?!

UCR:  Wow!  That must have been incredible!  Well, thank you so much, Kev.  Have a great set tonight!

Vin Rock: Thanks, good talking to you Kev!