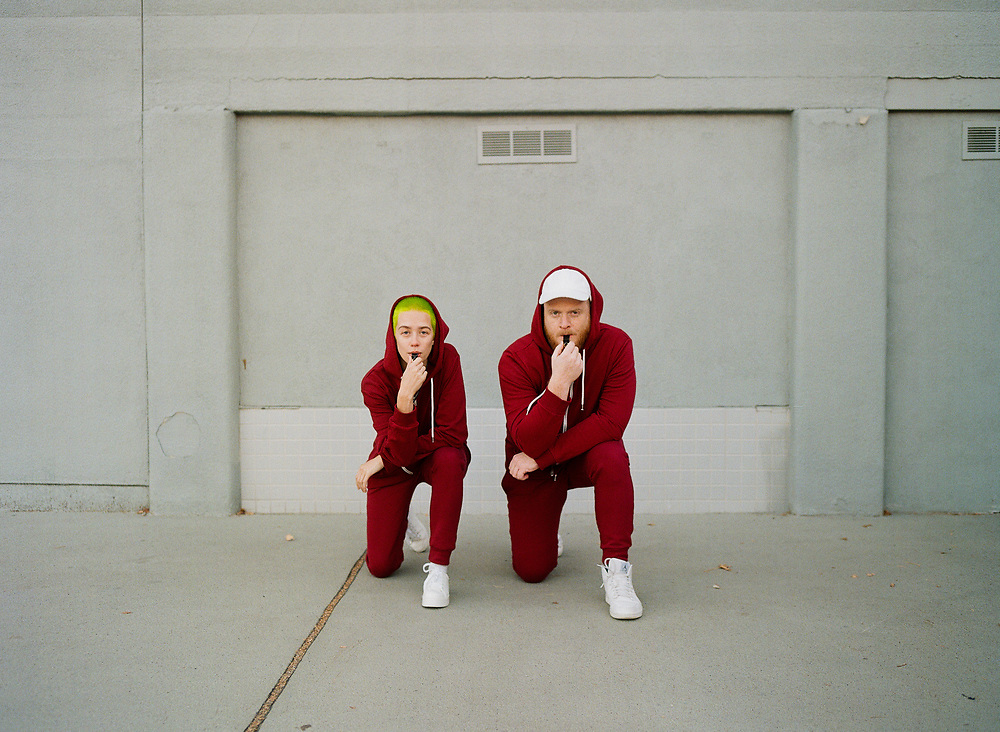 Utah Concert Review: I’m always interested in how things got started.  How did you decide you wanted to do music, and how did you New Shack form?

Cat Leavy: Eric and I have similar backstories in that we weren’t originally pursuing music full time as careers.  But it’s something that we’ve always done our whole lives.  I was raised as a classical musician doing a lot of competitions and I always thought I was going to study music and become a classical performer but that changed.  It was a really intense way to grow up.  It’s something I still love.  I practice the piano every day and I have a very deep love for classical music.  But as a teenager, it became a very negative thing for me.  I trend towards being obsessive and neurotic so it was a really negative environment for that. Just like the competition aspect.  So yeah, I decided to stop doing classical music that way and I actually didn’t really think I’d ever come back to music but I did.  And in my early twenties, I decided that I was going to use music as therapy, to write out my feelings.  And at the same time, this was before I knew Eric, he lost his job and decided to do music full time.  We met through mutual friends and began collaborating virtually because I was living in Germany.  We just started emailing tracks between us.  So Eric would come up with a cool beat, he would send it to me, then I would write a song to it, record some vocals then send it back to him.  And then we would mix it and turn it into a finished product.  What’s interesting is even now I live in L.A. and Eric lives in Utah and we still make all of our music virtually.  With that said, I think that our live shows have a lot of different exciting qualities about it.  Because when we get together and make a live version, it adds a whole different dimension to the music that is already there because we have to spend time figuring out how to really make it come together in a group setting because we don’t create it that way.  So we have to put extra effort and strategy into figuring out how to make it translate live.  I would describe our live show as our music but elevated.  It has so much more excitement and presence.  It’s been really fun to do that.

UCR: So how did you get involved with Les Femmes?

CL: Well Velour is our hometown venue.  I’m from Provo.  So I spent many high school nights at Velour.  We perform most of our shows there so it’s really exciting to be able to headline Friday night.  We’re basically friends with everyone we’re playing with.  It’s a really positive cozy experience.  It’s the atmosphere.  It’s not too big, it’s perfect.  We Love it.

UCR: So what can those attending Les Femmes this weekend expect.  Not only for your performance but throughout the weekend?

CL:  I think that they can expect a very wide range of musical styles.  I look at the artists performing and it’s quite diverse in musical style.  That said, I also think it’s important to bring up that this is just a very small group of women artists and specifically femme artists.  I think that there are so many underrepresented artists in Utah that won’t be playing this show.  You know this is just a three-day series.  While I definitely think it’s important to support this show, I think it’s also really important to keep in mind that there is a diverse music scene with young queer, female, like, a lot of underrepresented artists that are out there.  There’s a music scene for that and it should be supported.  I think that we can use this weekend as a reminder that this is a tiny little peek into people participating in that scene.  But the biggest takeaway is that there are a lot of different musical styles represented.  Which I think is so cool!

UCR:  Why do you think Provo thrives as a local music scene?

CL:  You know, I think there are a few reasons, but I think one is very much the presence of Velour.  You know, a cool venue, and Corey who’s doing a lot to support local music and connect local bands with opportunities and exposure. I think that he and also Kaneischa foster that music scene.  But also, I think if you go to a small town where there isn’t really a nightlife and there’s also a bunch of high school and university students and it’s just something really fun to do.  There aren’t any nightclubs or bars, and a lot of people don’t drink.  So the music scene is where it’s at.  It’s what you look forward to doing on the weekend.  When I was in high school that was what we did.  It almost didn’t even matter who was playing at Velour, it was where to go.  It was where you meet people, hang out with your friends, it’s exciting, it can be loud, it can feel like a party.  So I think between the fact that there is this really cool venue and there are a lot of young people looking for thing to do, I think it encourages people who are prone to creating and writing music, I think it gives them a space to do that.  So I think it between all those factors it snowballs into something really cool.

UCR:  Do you remember the first concert you ever attended?

CL: I remember when I was 14 I went to a smoothie cafe that was really cool for teenagers at the time.  At night they would let local bands play and I remember going to see this local screamo band with these cool 16 year old boys.  I remember feeling really cool.  I have no idea who that band was, but I was definitely a really young teen.  But the first real concert I remember was, I think I was 15 or 16 and it was Death Cab.  And I was obsessed with Death Cab when I was a teenager when I started to feel feelings and realize there was more than pop music.  And it was just a little more alternative than Jimmy Eat World.  I just remember listening to that music in a dark room being like “Oh, so many emotions!”

UCR:  Do you remember the first time you performed live?  What was that experience like?

CL:  Oh my gosh.  So the very first show I ever played was at Velour with New Shack. AndI had never performed a show in my life ever.  I had maybe sung in a microphone twice.  I was writing and kind of recording songs, but I wasn’t ever viewing myself as a vocalist.  The very first show I played I was headlining at Velour, the crowd was huge and I actually was so nervous that I can’t even remember it.  I like, blacked out! I don’t even remember performing the show.  It was so awful, I think my voice was just so shaky.  Someone had taken some cellphone footage of it, so the next day I watched it and it was so traumatic!  Hearing my voice so shaky and so off, I couldn’t hear myself because I sing so quietly, and it was just traumatic.  Eric just laughs it off, he is just able to look at things objectively.  And objectively people had a great time, but I remember the next day he could not get out of bed the next day.  I would be like “Well, that was my debut! All these people came to see me and I just really flopped.”  It was rough.  But it’s also motivated me practice really hard and invest in my voice as an instrument.  I definitely identify myself as a vocalist.  I’m comfortable singing a wide variety of things and I’m comfortable on stage.  So yeah, I’ve come a long way from that first show.

UCR: What would you say has been your best experience as a performer.

CL:  I’m not sure if this is my best performance, but my best experience would be last summer, New Shack got to open for Glass Animals at the Complex.  The crowd was huge!  Three Thousand people I think!  I really like to dance when I perform.  Every time I pulled a dance move the whole crowd just freaked out!  So I was like wait, hold on a second you like that?  You want me to keep doing that?  It was incredibly validating, incredibly fun, and just exciting to play with a big successful band!  So yeah that’s probably been my favorite experience.

I want to thank Cat for chatting with me.  I really enjoyed it. Be sure to catch New Shack’s headlining performance this Friday night (Feb 23) at Velour!

Get New Shack’s single Cherry!  Just released today!  Available everywhere.  You can take a look at the video below.

Eric has a music subscription service called Pleasant Pictures Music Club. There is a wide variety of music that you can license.