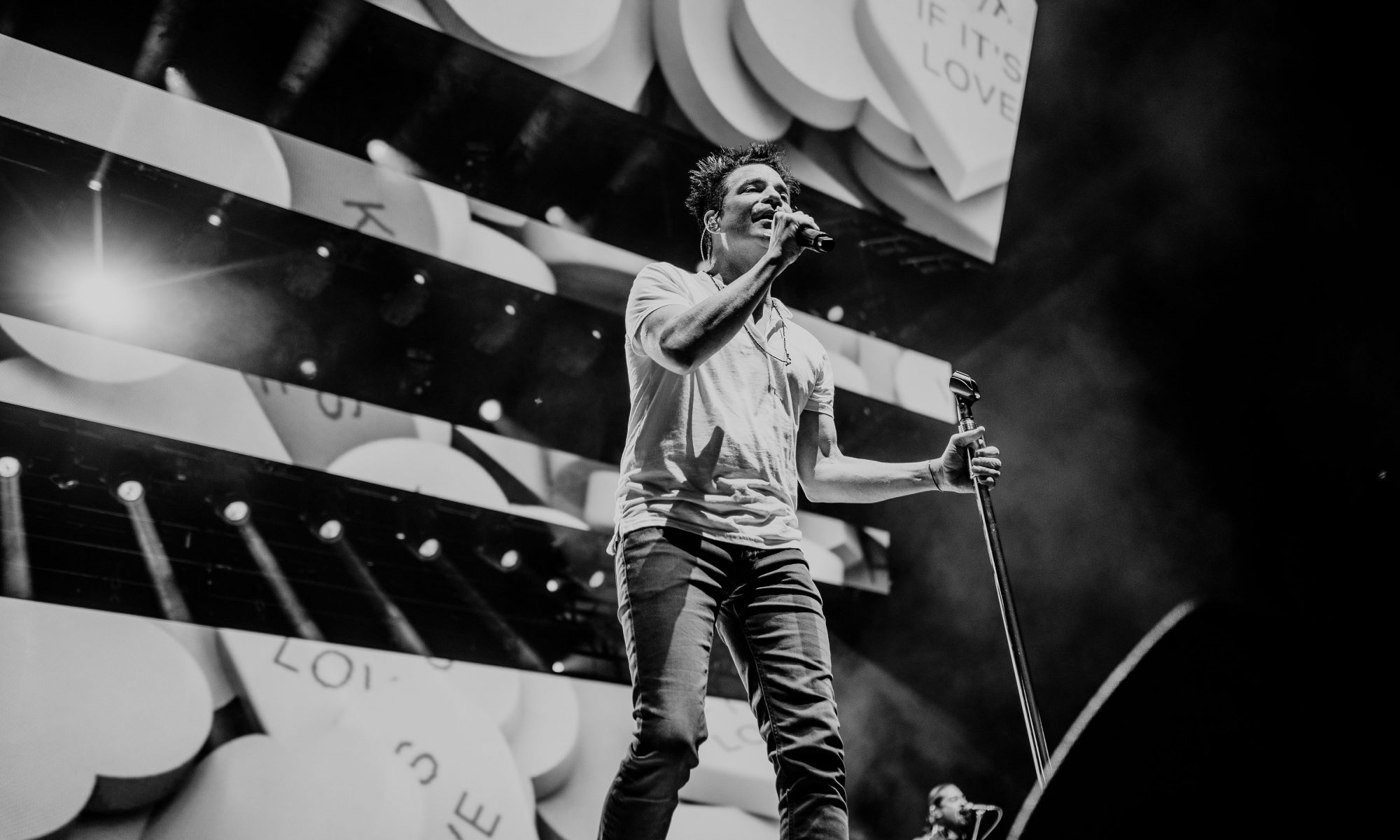 It’s always good to see a jam-packed USANA Amphitheater. It means that summer has arrived and good times concerts have moved to our great outdoor venues. I don’t know if I’ve seen USANA this packed since Def Leppard played here last. There was a buzz in the air as Goo Goo Dolls and Train fans made their way through the turnstiles.

In fact, that may have been my only complaint. Getting through security was a borderline nightmare. I had arrived early enough to get into the venue with plenty of time to spare, but the line to get in was so long Goo Goo Dolls started playing before we could get to through the gates. The line was all the way out to the parking lot! Security was getting people through as fast and efficiently as they could. It just seems like there needs to be a better way to get everyone in. I learned a new tip though. There is an entrance on the south side of the venue that is much less crowded. I’m definitely going to try that entrance next time. I recommend giving it a try as well.

I felt a little bad for Goo Goo Dolls when they walked on stage. While we had a great view of them, I wondered if they could see any of us. The beautiful sun setting behind us fans was staring the band right in the face! Fortunately, they all had sunglasses and the temperature wasn’t too hot. I’ve seen some shows at USANA and the support band looks like their cooking on the stage!

I think my initial concern was that with Goo Goo Dolls being the support band their set would be short and we’d miss out on many of the songs we were hoping to hear. Fortunately, their 65 minute set was filled with their biggest hits and crowd favorites.

Lead singer Johnny Rzeznik shared some engaging stories and memorable lines during the show. He told the audience that the first concert they played was for about nine people. He also shared that their hit song “Name” was the first Goo Goo Dolls song that was played on the radio. He stated that the song was written after spending nine years as a band and sitting on a dirty sofa in Buffalo, New York.

I thought there was a good mix in the setlist of old and newer songs. And while there is sometimes a reluctance to embrace the new stuff, I really enjoyed it. Of course, there is nothing like hearing the songs that you came to hear. The crowd went crazy for “Iris”, Goo Goo Dolls biggest hit and signature song from my husband’s favorite movie City of Angels. He told me I was his Meg Ryan to his Nicholas Cage. Still not sure how I feel about that, but I’ll take it. Anyway, Goo Goo Dolls killed it on this song. Everyone in USANA Amphitheater was singing along. It was fun to see how much the band got into their final song of the night, “Broadway”. Rzenik even broke a string during the song! I was especially excited to hear the keyboard featured again.

My last opportunity to see Goo Goo Dolls was when they played Red Butte Garden in Salt Lake City. I went to the show with someone who had to work at 4:30 AM and wanted to leave before the band even came on! I, unfortunately, had to take him home and missed Goo Goo Dolls set. I swore I wouldn’t make that mistake again. I’m so glad I had the opportunity to see them! They really got things going for Train.

When I think of the band Train, I think “Pretty good band. Solid career.” But then I had the chance to see them live. They are one of the most unassuming bands around. They work so hard to give the crowd a good show. I was so impressed with their set.

Loud train horns began blaring through the speakers to signal the band coming on stage. They started with “Calling All Angels”. As Train flew through the set I quickly realized that I had forgotten just how many hit songs the band has. Songs like “Save Me, San Francisco”, “Meet Virginia” and “Marry Me” have played through my radio speakers many times. It was hard to believe I was finally seeing these songs performed live. We loved them and it was clear that Train really loved us. Lead singer Patrick Monahan even told us that we were “Better than Denver”. Which I have to believe is true. The crowd was so into the show. Show opener Allen Stone came out and sang a couple of songs with Train. I’m happy when headliners invite the opener on stage with them. It gives the opener a chance to play in front of a full and excited venue.

Train also impressed me with the covers they performed. They played a really fun version of Tom Petty’s “American Girl” along with the Queen and David Bowie duet “Under Pressure”. Not songs I’d expect Train to pull off, but now that I’ve seen them live, I won’t be surprised by anything they’ve done.

The only unfortunate part of Train’s set was when they left for their encore. I think due to the tight parking a lot of people made their way to their cars before the band could return. Fortunately, those who stayed and were treated to Train’s biggest sing-along and probably biggest hit “Drops of Jupiter”.

My husband has been telling me for weeks leading up to this show just how amazing Train is live. I thought he was just biased because he’s such a huge Train fan, but he was not wrong. Train is a band that I’d see over and over live. They put on an impressive high energy show. They sound great and they seem like their having a great time on that stage.

Got Nowhere Else to Go

Bringing On the Light

Save Me San Francisco

When I Look to the Sky