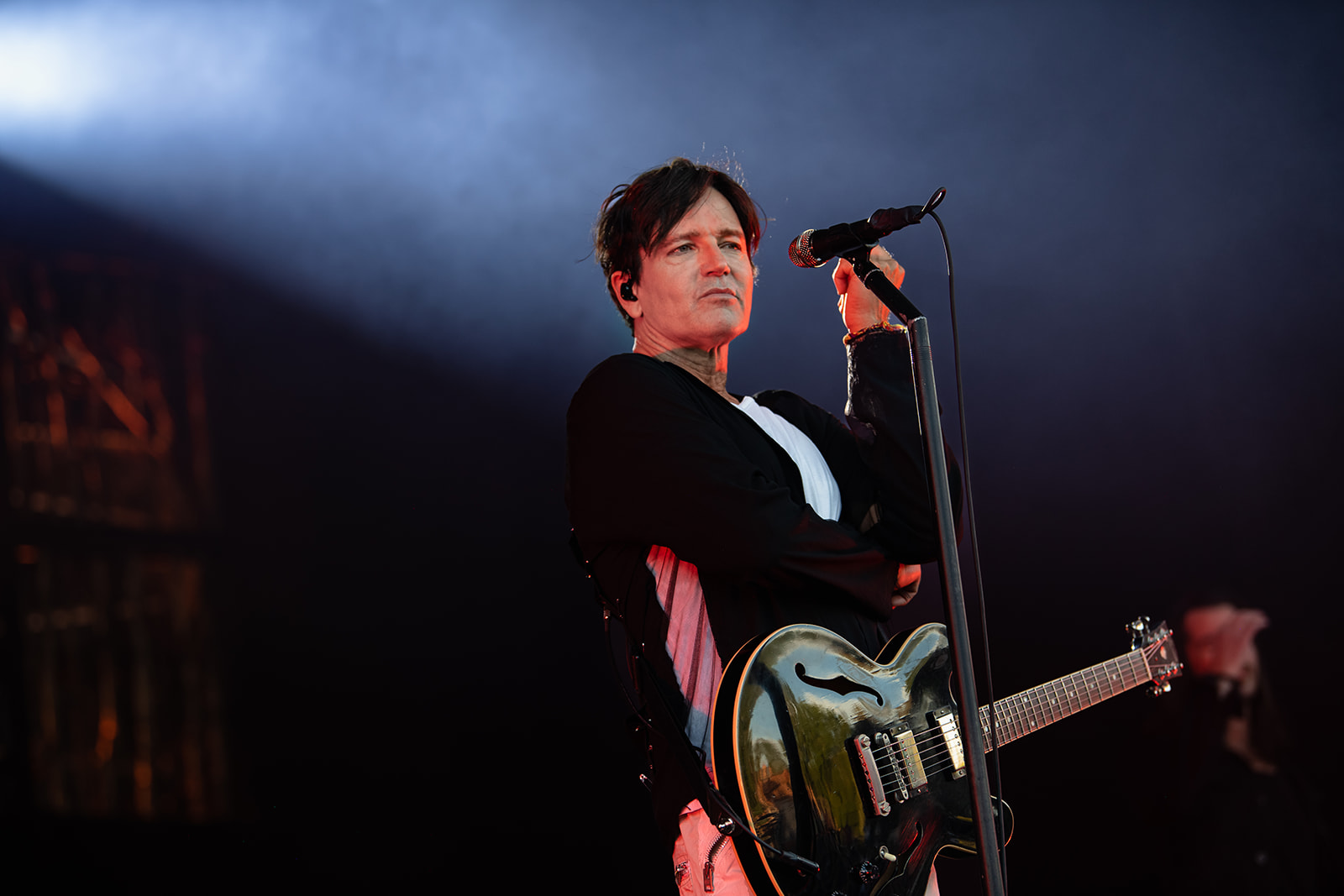 A crowd full of 90’s alternative music lovers all gathered together at the Sandy Amphitheater on Saturday, June 25th. Third Eye Blind has always been known to attract a large crowd. I was not surprised that the show was sold out. Many in attendance were eager to reconnect with one of their favorite bands from their past. They hoped to hear those nostalgic favorites including “How’s It Going To Be,” and “Semi-Charmed Life”.  There were also those in the crowd who have never stopped playing their music, or following the band’s journey. There were even some young new fans. Regardless if they came to hear the band they fell in love with in the 90s, or if they had recently discovered Third Eye Blind, I don’t think a single person left disappointed.

I arrived at Sandy Amphitheater just a few minutes before Hockey Dad took the stage. It was extremely hot outside and many people were not quite ready to take their seats in the blazing sun. I noticed quite a few people looking for shade around the venue as they listened to the band. The surf rock band from Australia did an amazing job and I enjoyed their set. They played some really fun songs like “Seaweed,” “Itch,” and “Join The Club”.

Later in the night, I had an opportunity to talk to their touring photographer, Ian Laidlaw. I was excited to learn a little bit more about them. Ian told me that Stephan Jenkins, the lead singer of Third Eye Blind, had been a fan of Hockey Dad for quite some time. A few other Third Eye Blind band members saw Hockey Dad perform at the South By Southwest Festival a few years ago and loved them as well. So when it came to planning their 2022 Summer Gods tour Third Eye Blind thought Hockey Dad would be a good fit as an opener. I couldn’t agree more.

Next up was Taking Back Sunday. I had seen them before at a few different music festivals, but it had been such a long time. They did a great job interacting with the crowd and getting everyone excited to be there. Lead singer Adam Lazzara told everyone in the audience to put one hand up in the air. Then the other hand, and then put them together. The audience seemed to pick up the concept of clapping fairly quickly. Almost as if they had tried it before.

After singing a couple of songs, Lazzara noticed a fan with a sign that read “There’s No I in Team”. The title of a song they released in 2002. It was clear they had not intended to play that song. He mentioned they hadn’t played it in a while. But after getting approval from his band Lazzara pointed at the fan with a sign and said this one is for you. The crash course on clapping from earlier paid off, and the crowd cheered excitedly. Another fan stood up and took his shirt off to twirl it in the air; Lazzara added “and it’s for you too”. To finish their set they played some of their old favorite songs like “Cute Without The E (Cut From The Team)” and “MakeDamnSure”.

The temperature had finally dropped to a more comfortable level by the time Third Eye Blind took the stage. Every seat in the amphitheater had been filled. Hundreds of fans found their way to the lawn with their blankets and lawn chairs. At this point in the night, however, the seats had become irrelevant. This was not a concert anyone had any intentions of sitting through. The band wasted no time getting things started. They played “Ways” while they spread out across a unique set design.

Displayed on the stage were large ramps covered in rows of tree branches that almost resembled an aspen grove. I enjoyed the juxtaposition of the colorful stage lights and fog against the rustic and earthy backdrop. The band was flying through their songs. I got the feeling they wanted to give their audience everything they could. With their incredibly impressive 26-song set list, they had no time to waste.

It had been at least 15 years since I had last seen Third Eye Blind perform live. I will admit I was not familiar with many of their newer songs, but I loved them immediately. I especially enjoyed “Dust Storm” and “Funeral Singers”. Both from their 2021 album Our Bande Apart. I figured they were going to make us wait until the very end for their biggest hits. But I was happy to hear some of my old favorites like “Never Let You Go” “Crystal Baller” and “Losing A Whole Year” in the meantime.

At one point during the night, Lead singer Stephan Jenkins stood alone on the stage and sang an acoustic solo version of “Red Star” and “Background.” His performance was beautiful and it was a very memorable part of the evening. After his solo, the band rejoined him on stage. Jenkins encouraged everyone in the crowd to find someone to put their arms around.

I could tell the night would be coming to an end soon and while I was eager to hear their biggest hits, I wasn’t quite ready for the show to end. As they sang “Jumper” I could feel the emotion from everyone in attendance, as the entire audience sang along with every word. Jenkins, known for being a big advocate and activist, has previously mentioned in interviews that the song was inspired by the suicide of a gay teenager who had been bullied. I know his words were meant for more than just the LGBTQ+ crowd, but It was an incredibly special moment to watch him sing that song so passionately, especially during Pride month.

After the band left the stage the audience started to chant “10 more songs, 10 more songs.” When they walked back out for their encore, Jenkins was now wearing a “Hockey Dads” shirt. I thought it was a pretty cool gesture for him to show his support for them in this way. While they didn’t give the audience the full 10 songs they wanted, they were generous enough to play a 3-song encore. The energy reached its peak during “Semi-Charmed Life,” and didn’t settle down until they had also finished “How’s It Going To Be,” and “God Of Wine.”

Just as the song ended I noticed Stephan Jenkins rush to the front of the stage and talk to a Lady. He had noticed front-row fan Emily Cannon wearing a shirt that said “Pro Roe” and he wanted to tell her he loved her shirt and expressed to her the importance of standing up for women’s rights. He invited her and her son Truman to meet him backstage to take a picture. While this exchange was a conversation just between Stephen and Emily without the entire audience hearing a word of it, she shared their interaction with me a while later. As Emily and her son were escorted backstage the band gathered together in the front to take a bow and receive the applause from a very pleased crowd. Third Eye Blind thoroughly rocked the crowd, and it was better than I had even hoped for.