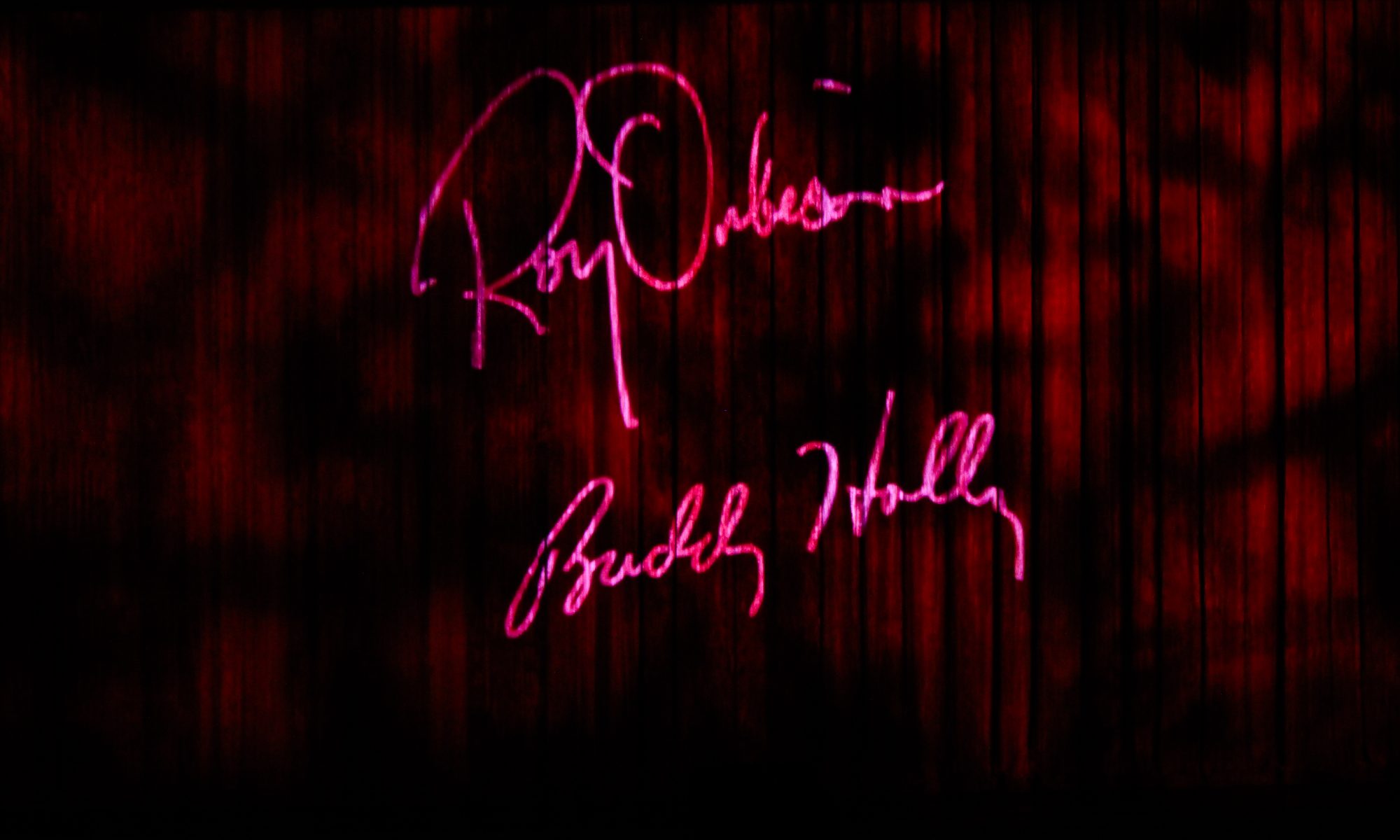 It’s hard to believe we’re well into October already. But sure enough, we’ve reached the month where we celebrate, spirits, ghosts, and at Eccles Theater…holograms? It’s true. On October 10 the Rock ‘N’ Roll Dream Tour with Roy Orbison and Buddy Holly confused our eyeballs and delighted our imaginations. When I first heard of this concert it piqued my interest. Enough so that I knew I needed to see what this was all about with my own eyes. So I made my way out to Eccles Theater and saw the show. I’m still not sure what to think of what I saw.

The Rock ‘N” Roll Dream Tour is a production that has been put together by a production company called Base Hologram. They state that they harness “the magic of holographic live and out-of-home entertainment to create concerts, theatricals, and spectacles to entertain all types of audiences, in all types of venues such as tourist destinations, museums, touring attractions and other events, all over the world. We combine advanced holographic cinema with live entertainment as the primary stage craft to astonish every spectator by suspending disbelief.”

The show begins with a live band consisting of two female back up singers, drums, keyboard, bass and two guitars, taking the stage and playing the music of Roy Orbison while footage of his career plays on a screen. Mr. Orbinson is then introduced and he appears as if he’s rising up from below the stage. “He” begins the concert with one of his huge hits, “Only the Lonely”. It was interesting because when Orbison’s voice was first heard, the audience applauded. There is this strange negotiation your brain goes through during this concert. I found myself going back and forth telling myself, “That’s not him. He’s not up there singing.” But also thinking, “Oh, I love this song!” Or, “I love this arrangment.”

As for the Roy Orbison hologram, when I first saw it appear I studied it and looked closely to see if it looked like Roy. It totally did. His performance mannerisms were very much like Roy when he was still with us. He was a very subtle performer and he let his voice and its amazing range be featured more than moving around the stage. Don’t get me wrong, it’s obvious it’s a hologram and not a real person up on that stage. But at the same time, I found myself having to remind myself that I was watching a hologram. The movement was natural and smooth and when I was letting myself not focus on the hologram aspect, I felt like I was at any other concert. I enjoyed the detail Base Hologram added like having the Orbison hologram thank the audience, or look to his band hoping to be counted in on the next song, or the guitar cord. It was easy to suspend disbelief many times during the Roy Orbison segment of the show.

There is one thing that must be pointed out about this experience. The live band and live vocalists are really good. In my opinion, they’re the reason this show works. If it was just a hologram with backing tracks of vocals and the band, it would be a pretty flat and somewhat emotionless show. But the live band adds all of the emotion and energy to these songs and the concert as a whole. I thought the women harmonized beautifully with Orbison’s high tenor voice. I couldn’t help but think that this must be a very unique experience for them. This is probably something so different from the rest of their careers.

The main reason I wanted to see this show was to see the Buddy Holly segment of this concert. Don’t get me wrong, I love Roy Orbison. But he was alive during my lifetime. So I’ve seen him perform live on TV many times, and while I wish I would have had the opportunity to have seen him in concert, I’m glad I was able to see his videos and concerts when I was young. Buddy Holly as many of you know died tragically when he was only 22 years old in 1959. There is not a lot of live footage of Holly that is available to the public. So this was my chance to feel like I was getting to see one of my all time favorite musicians in a concert setting. Because of this, I was a little more critical of this set.

I think the things I struggled with the most was the hologram I was looking at was not Buddy Holly. Now before you check me into a mental hospital please understand that I know I wasn’t looking at Roy Orbison. It was a hologram. But from what I could tell it was a hologram of his exact likeness. The hologram of Buddy Holly looked as if it was an impersonator that was hologramed. I would imagine it’s much harder to create a hologram of Holly because there is only so much footage of him so I’m not trying to be too critical. I thought they got his movements down and guitar playing style very much matched Holly’s. I’m a huge Buddy Holly fan, so just because I noticed this doesn’t mean the general audience did. I could see them bobbing their heads and mouthing the words to these songs so it was pretty obvious they enjoyed the music.

During the intermission, I asked a few people what they thought of the experience so far. I got into a pretty fun but intense conversation with a couple of men who had some big ideas on how to make the show so much better with only a few tweaks. Perhaps if there were any live recordings of these songs, these vocals would fit better in this setting to make it feel like more of a concert. Having the holograms walk on stage rather than just appear could help too. We agreed that was probably easier said than done. A couple told me that if you sat a little further back, and straight on it looked really real. But if you sat high up or two the side the holograms looked a little flat and didn’t match the size of the rest of the band. I noticed from my seat, which was a little further back and on the orchestra level that the holograms looked to scale with the band and were three dimensional.

I think this show is a really cool concept. It was fun to see these legends in a concert setting. I would have never had the opportunity otherwise. I also loved hearing the digitally remastered vocals played throughout Eccles Theater. This show might not be for everyone. But for those at Eccles Theater, it was a fun night. After every song, and especially after the upbeat songs, the audience applauded their approval and got a kick out of every “thank you” they got from the holograms. I think we’ll begin to see more and more of this in the years to come.