I’m always fascinated by the crowd drawn to particular artists. There are definite patterns and traits, a continuity that falls in line with the artist’s style. Looking around the Stone Temple Pilots/Bush/The Cult/Bones audience, I see an abnormal amount of men in billed hats (the metal/biker kind, not sports). There is also an abnormal amount of facial hair. These aren’t hipster beards, though. These are I’ve-never-had-to-go-to-an-auto-mechanic-for-anything-in-my-life beards. There is a higher number of women in tank tops with big, Amy Winehouse hair (okay, maybe not quite that big) and heavy eye makeup than you would see on a normal day. Everyone looks like they lift.

All the Clever Ones are Lonely

Bones (UK), the opener, was the most engaging act of the evening. Not to slight later performances, Bones was simply exceptional. I was pleased to see these two as clear inheritors and evangelists of the riot grrrl movement (as someone who remembers how important bands like Sleater-Kinney were to my angsty adolescence).

Their recorded music has a heavier, industrial feel thanks to electronic drum and bass (see “Pretty Waste”). The live performance was straightforward, hard rock. Their presence was conversational; they made friends with the audience between songs. Rosie’s lyrics, charged with themes of self-acceptance, were emphasized by Carmen’s well-tempered, aggressive guitar that rigidly enforced tempo.

The video for “Beautiful is Boring” mockingly inverts the way sexes are portrayed in male-centric rock media and the lyrics are just the message young girls need to hear. The live performance of “Beautiful is Boring” featured a hooking, synchronized stomp. The touring drummer was on point the entire show.

“This doesn’t mean we’re afraid of Americans. It’s a cover. You all seem really nice,” Rosie clarified before delivering a high-octane take on the Bowie classic (yes, harder and heavier than the original, go buy it already). She tinkered with her own accent, alternating between “I’m afraid I can’t,” and “I’m afraid I cawhn’t,” playfully amping up and dialing back her Britishness.

They executed a vengeful, blues-infused “Girls Can’t Play Guitars,” written after a bloke from their ‘hood in Camden, London told them it was impossible for girls to play the instrument well. Rosie’s scratchy vocals are a fitting vehicle for righteous anger. You had to smile whenever Carmen’s soaring guitar solos rendered Rosie’s lyric, “Girls can’t play guitars, it’s biologically impossible,” sarcastic.

Everyone stood when the graying, grizzled masculinity of The Cult took the stage, hammering out “Wild Flower.” Dressed in black, sporting jackets, sunglasses, and even a bandana, they looked like gothic truckers. The band made thematic use of the enormous screen behind them, displaying a blurred, kaleidoscopic image of a flower for their first piece, followed by slowed close-ups of raindrops when the tempo picked up with “Rain.” “Lil’ Devil” was accompanied, unsurprisingly, by a fast-forwarded, go-pro view from a motorcycle. The long instrumentals on “Sweet Soul Sister” were Billy Duffy’s and Grant Fitzpatrick’s playground, the music oozing from their guitars as naturally as sweat, accompanied by the sparse, atmospheric keyboarding of Damon Fox. 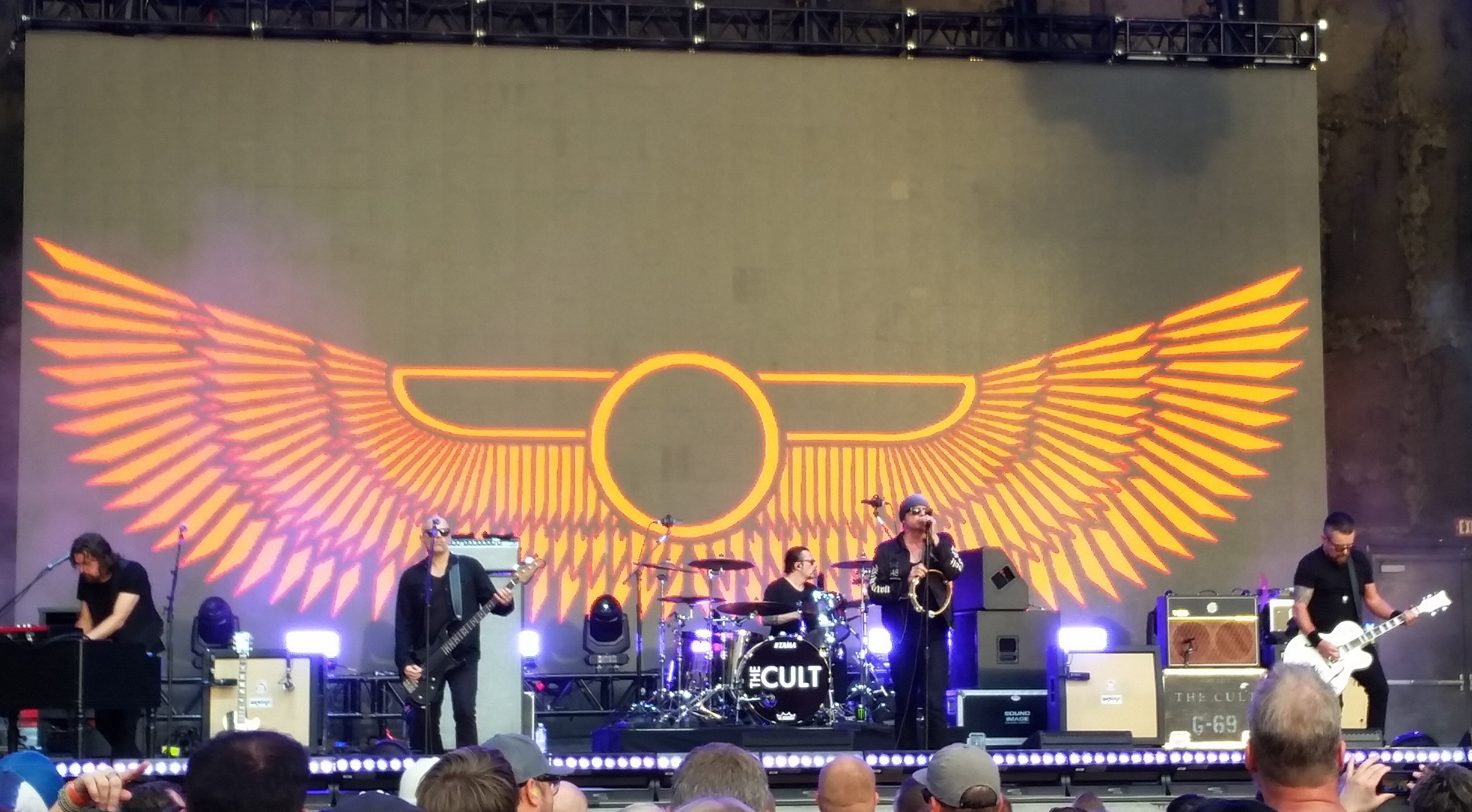 Ian Astbury stood on the stage like lead, one leg pulsing to the beat, occasionally strutting to the drums and back. He chanted the band’s faux-mysticism through “Elemental Light,” “She Sells Sanctuary,” and other numbers, eliciting a trance-like state aided by John Tempesta’s tireless drumming. Ian praised a spastic, whirling, gray-bearded man immediately to my right, saying, “Thank you, brother, I appreciate your energy, representing The Cult flow.”

Mickey Mouse Has Grown Up a Cow

Bush made a loud entrance with “Machinehead” followed by “This is War.” Gavin Rossdale’s explosive energy lasted through the entire set. He bolted, bounced, and leaped across the stage. He was never not jumping; his calves must be rocks. “I don’t care if it’s a Monday night,” he said, “It’s a weekend for me. I’m on tour. Every night is the f***ing weekend,” before starting in on “Everything Zen” accompanied by female silhouettes on the big screen (who eventually murdered each other with chainsaws). “The Sound of Winter” came with a video of girls in miniskirts and nylons swimming underwater. A drum-heavy, grunge-rock cover of “Come Together” (The Beatles) worked surprisingly well. Robin Goodridge, Chris Traynor, and Corey Britz all gave solid performances. 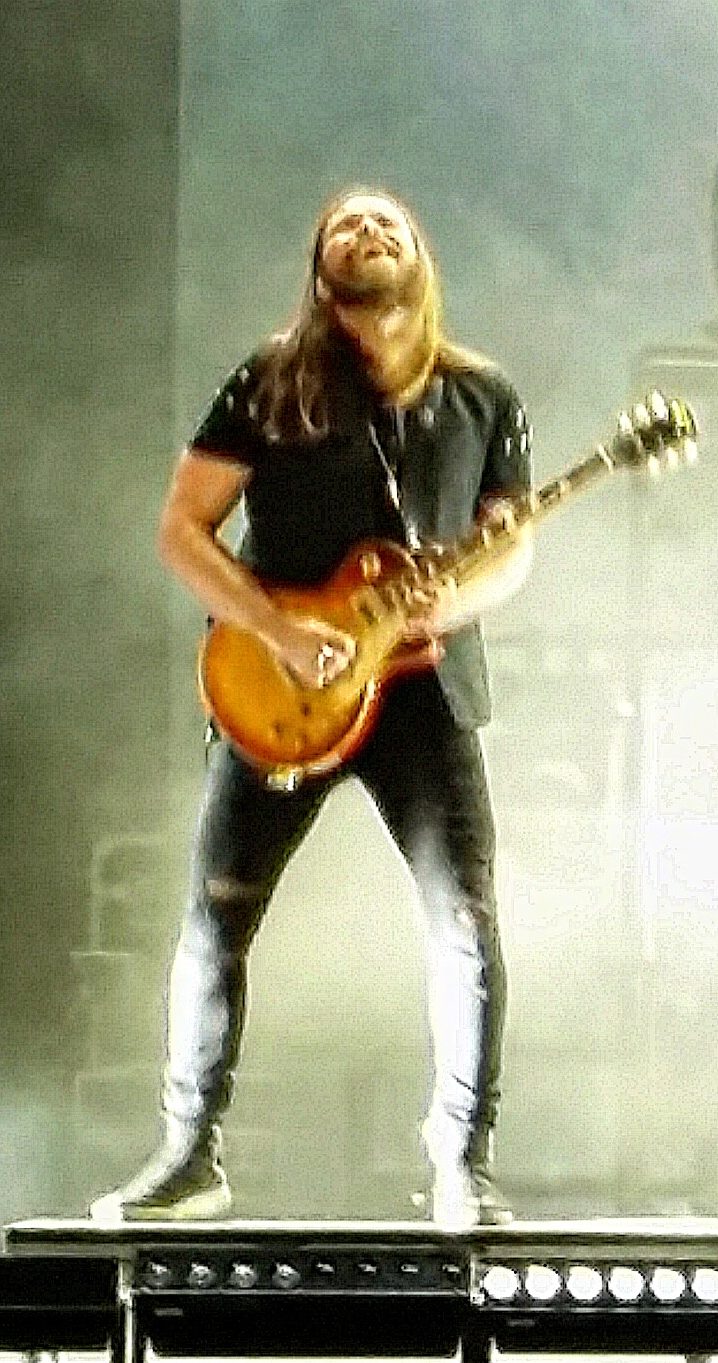 Gavin asked the audience to take out their cell phones and light each other up so he could see our faces. We obeyed. He asked the venue to shine lights on the audience. They obeyed. “That’s beautiful,” he said, “we’re stratospheric, floating on a cloud, different people with different beliefs getting along together, coexisting.” This heightened the effect when all lights went out, replaced by a single white light on Gavin, his burnt voice modulating “Glycerine” alone on stage accompanied only by his own guitar. The band dramatically joined in for the last third of the song. These three-and-a-half minutes were the only time Gavin stood still. 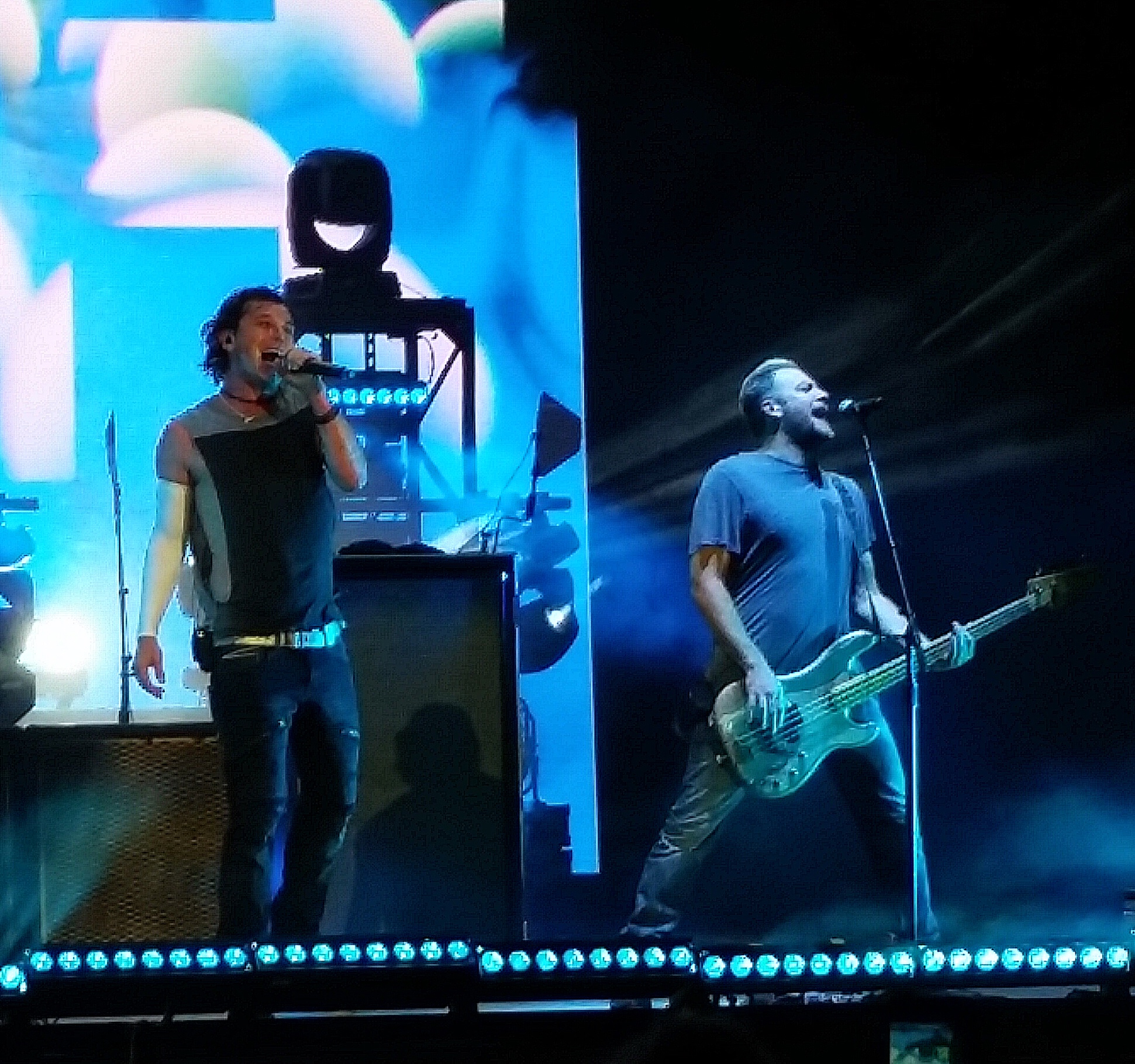 Bush closed with “Comedown,” allowing the audience to carry one of the choruses: fandom proven.

Jeff Gutt, a new addition to Stone Temple Pilots, confidently stepped into the shoes of a rock god. His voice is more sonorous than Scott Weiland’s while maintaining the aggression necessary to the band’s sound. The band entered with ultimate swagger, slaying “Wicked Garden.” 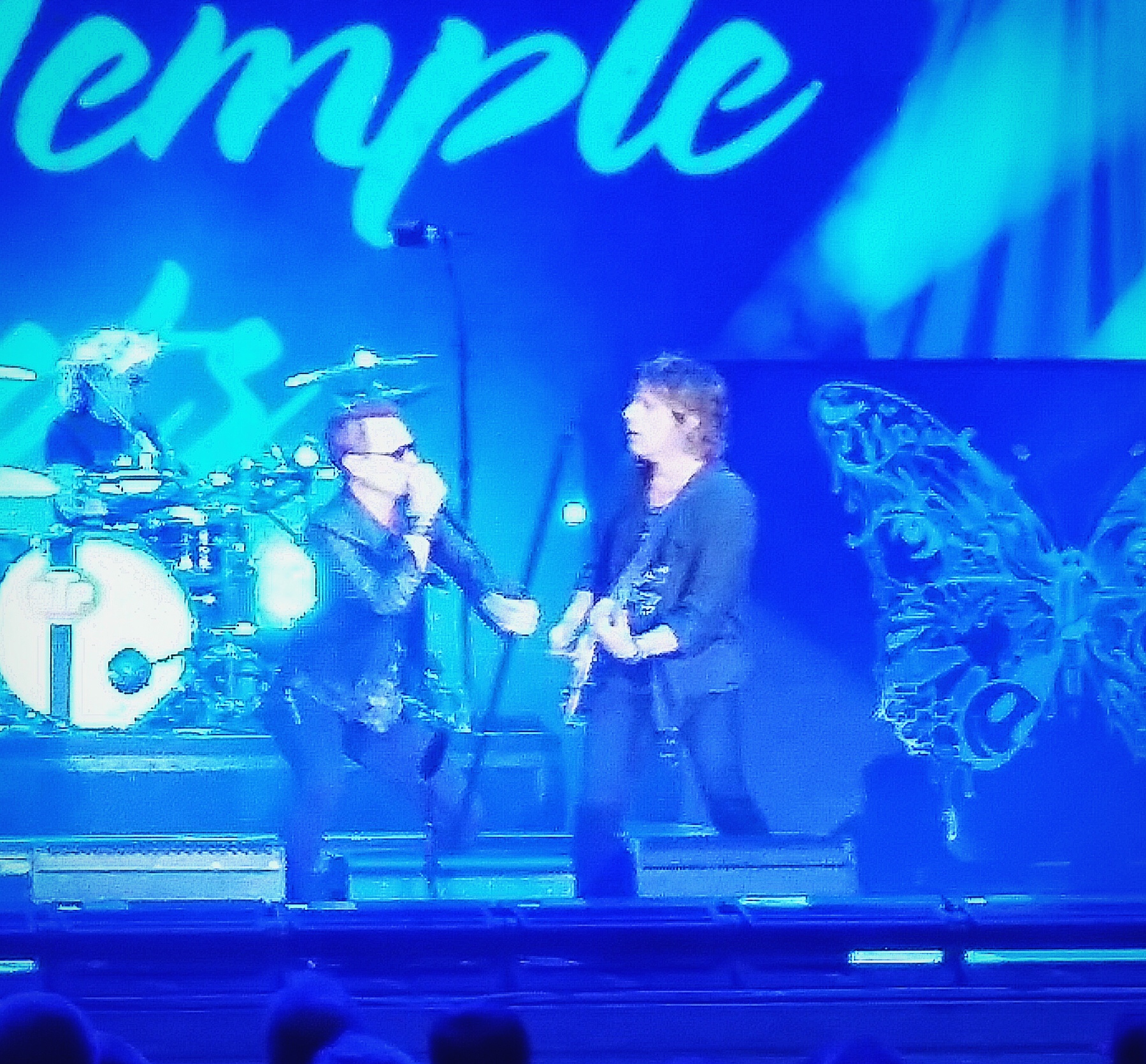 Jeff’s presence was fluid and feline. He prowled across the stage, taut muscles crouching, swaying, and sashaying. His movements somehow flirted with the notion of effeminacy without abandoning virile manliness. Example: during the second number, Jeff stretched his lower body on the floor, using one arm to support his arched torso in a Little-Mermaid-on-the-rocks pose while simultaneously emitting a masculine howl into the mic in his other hand. The effect was alluring—for everyone. 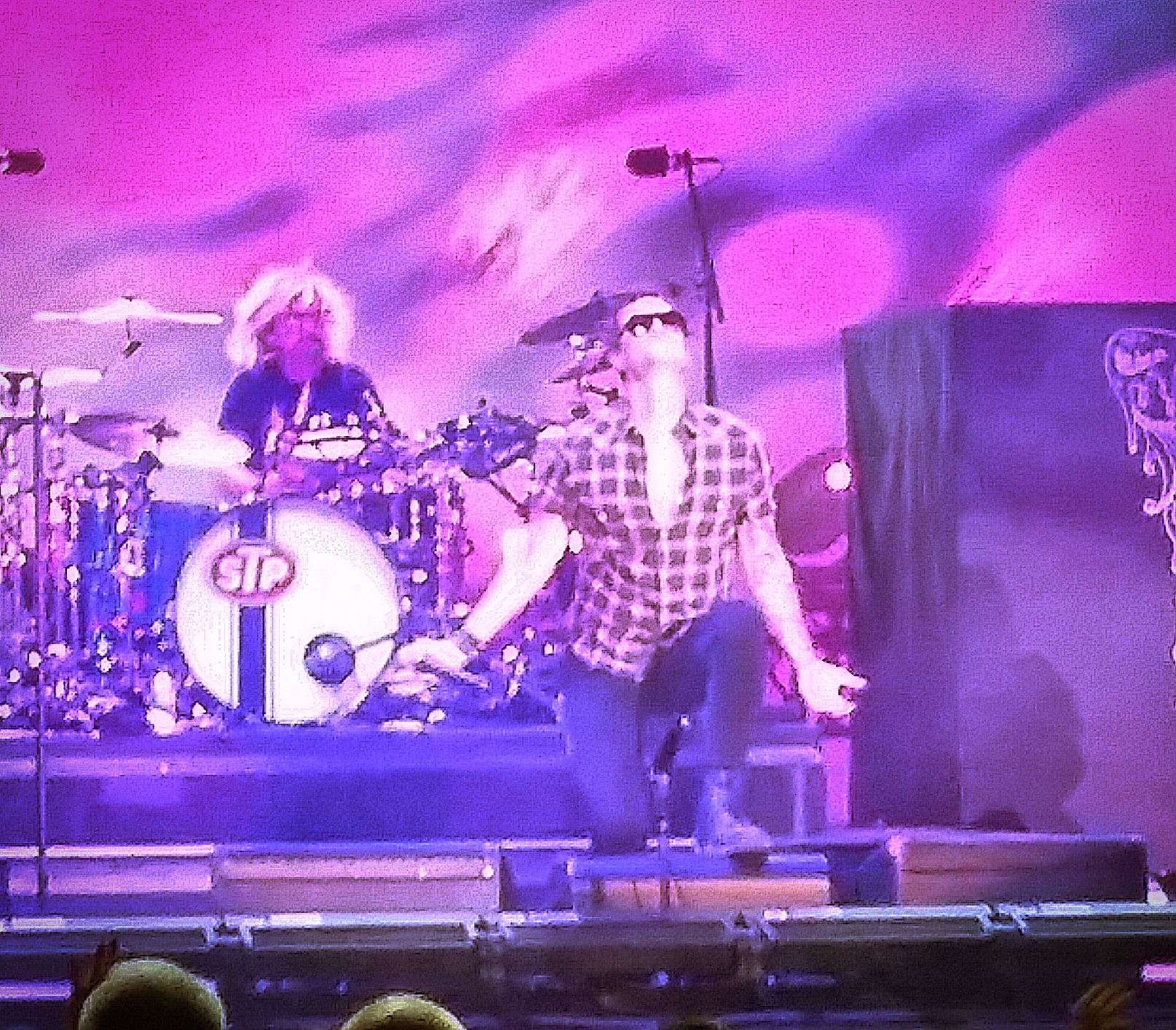 Dean DeLeo, Robert DeLeo, and Eric Kretz were in full control of their instruments. The inevitable headbangers made themselves known during “Down” and again during “Dead and Bloated.” Jeff gradually stripped, first shedding his leather jacket, later flicking his sunglasses into the crowd, eventually unbuttoning, and then losing his shirt. He ran deep into the audience during “Roll Me Under,” squirming through people who—I’m sure—did not expect to be up close, much less delivering backslaps. 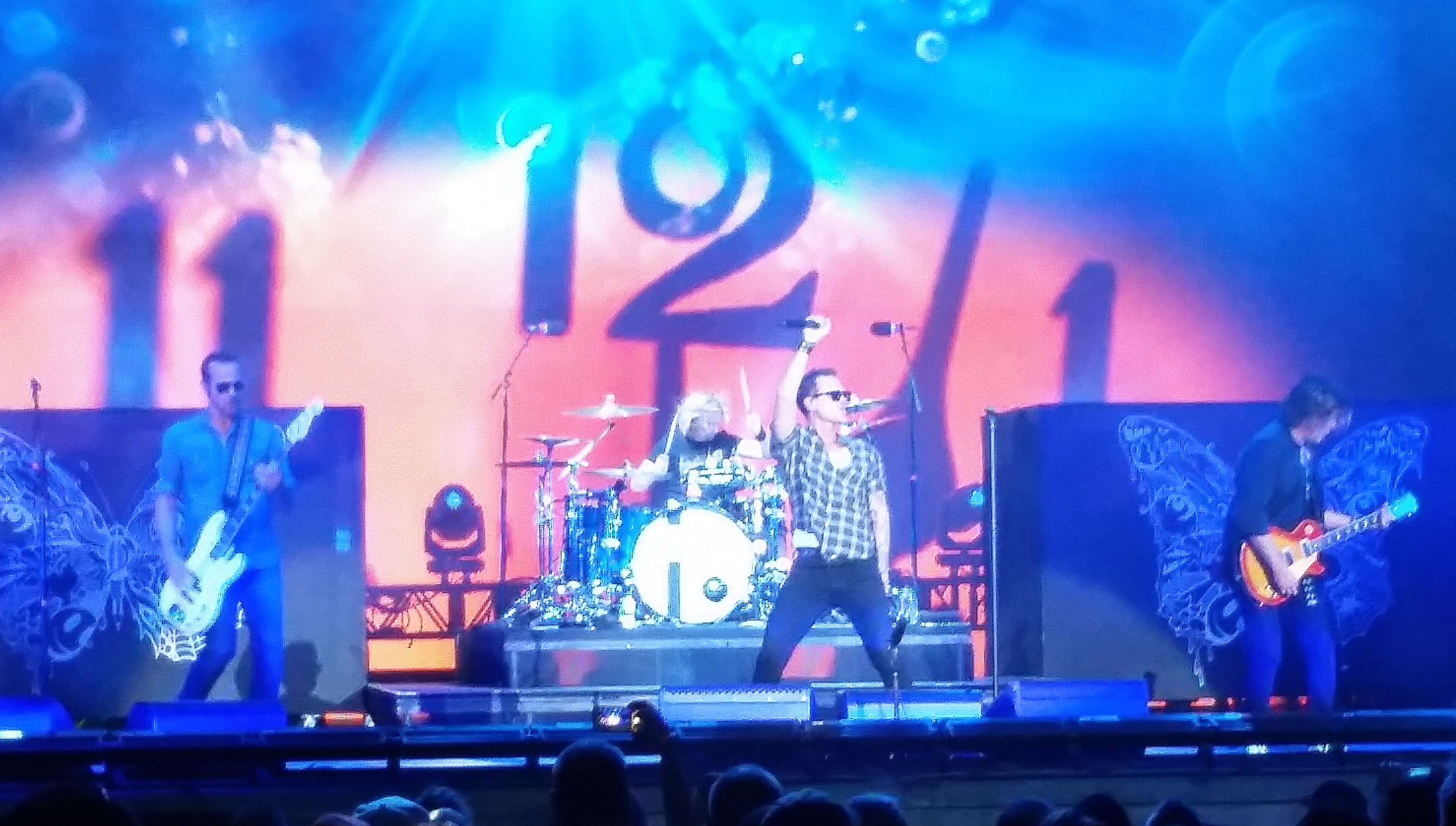 The band closed with the late Scott Weiland’s “Sex Type Thing,” an unsettling evocation/condemnation of toxic masculinity in the form of date rape. It’s always sounded a little too celebratory for my ears. Monday’s performance was no exception. 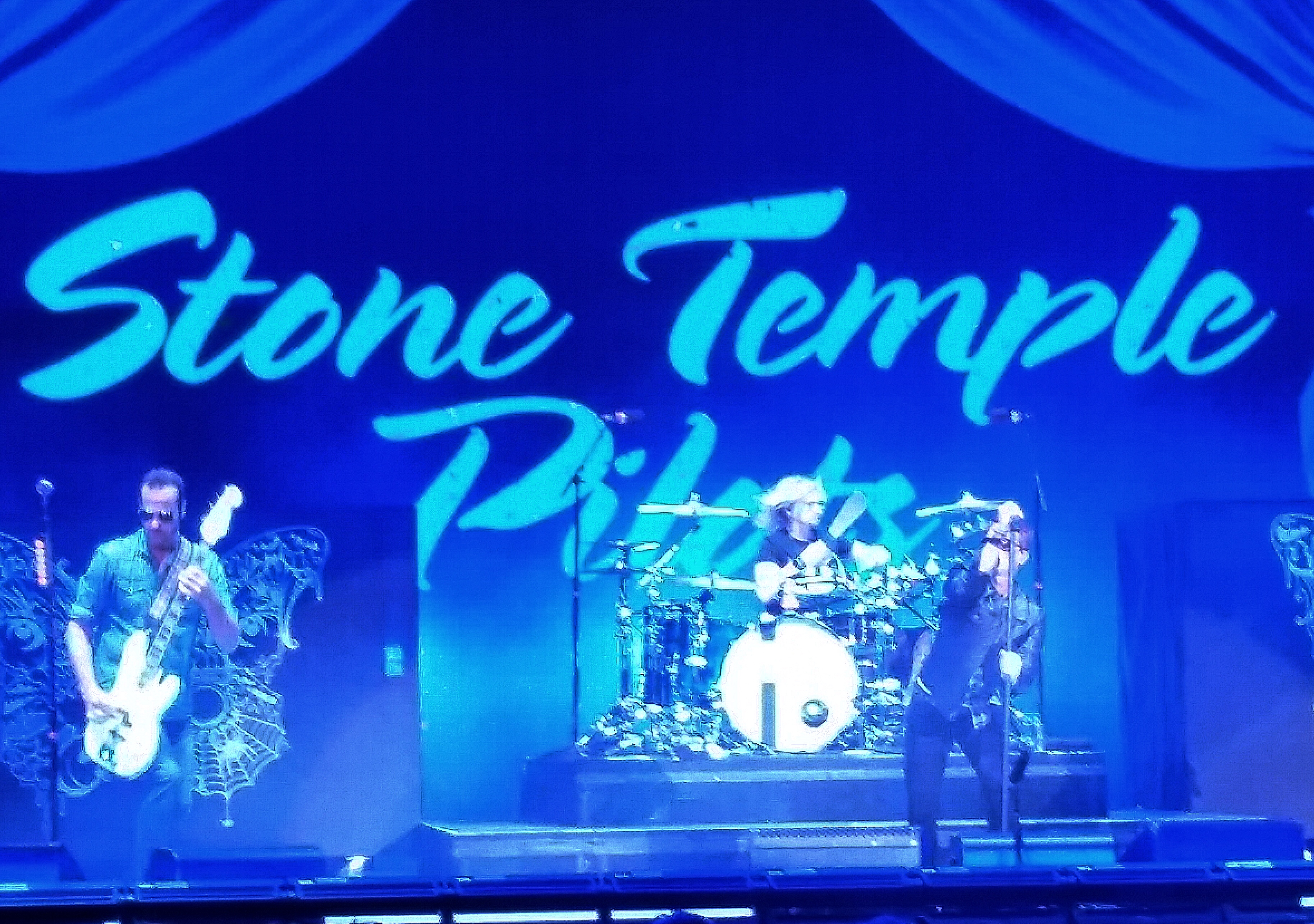