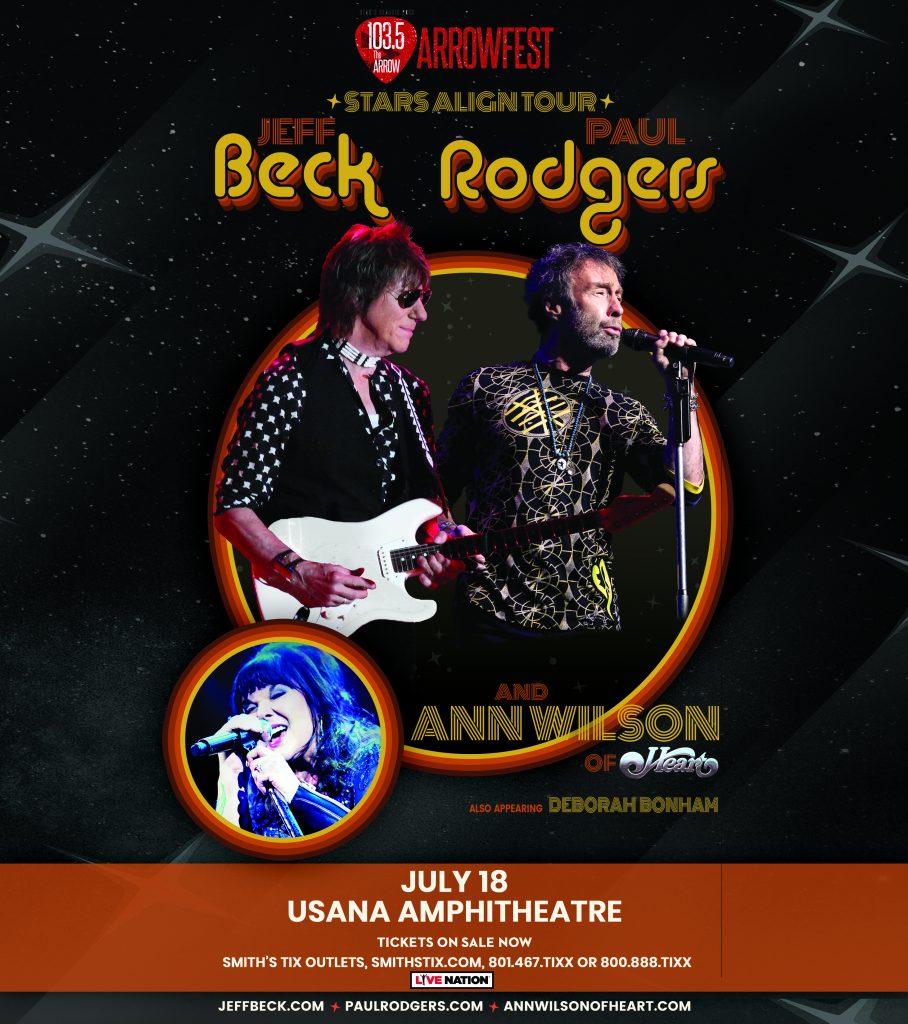 USANA Amphitheater was the home of the opening night of the Stars Align Tour featuring Jeff Beck, Paul Rodgers, and Ann Wilson.  It was also the third and concluding volume of Arrow 103.5’s Arrowfest.  It was a hot evening still hitting temperatures of 100 degrees at showtime. Unfortunately, the attendance for this show wasn’t great.  But the voices of those in attendance was mighty. Despite the initial heat, it was a really fun night.

Ann Wilson opened the show.  I really felt for her because the Amphitheater faces west so the sun was setting directly on her and her band.  She opened with The Who classic, “The Real Me”, then broke out into the Heart hit “Barracuda”. Following the song, she stated that she would be veering from the Heart catalog in order to share some songs off of the new album.   Many times that would be met with a large sigh, or disappointment. But Ann mentioned that her album titled Immortal consists of songs from legendary artists who have recently past such as David Bowie, Tom Petty, Chris Cornell, and Glenn Frey.  I suppose if you’re not going to do songs from the band that made you famous, might as well do some awesome covers. Right?

Just like last year, when Ann performed at the Sandy Amphitheater, my favorite song of the night was her cover of The Black Crowes song, “She Talks to Angels”.   It was as if that song was written specifically for her voice. It’s a perfect fit. I enjoyed her tribute to Chris Cornell, coinciding with her performance of the Audioslave “I am the Highway”.  Another song that fits right into her vocal register.

It seemed that the heat and the sun began taking its toll on Ann.  I noticed her walking back to the drummer fan once, and often shielding her face from the sun.  When she finished singing the Eagles song “Life in the Fast Lane” she quickly said, “Thank you Salt Lake!”  and abruptly walked off stage. Everything seemed to happen really quick. I watched her as she walked off stage to make sure she was ok.  I didn’t know if the plan was to come back out or not, but just then I saw a crew member signal to the soundboard that they were done.

As it turns out there were two more songs on the setlist that weren’t played.  I can’t say I blame her though. It was so hot for me and I was in the seats. She must have been cooking up there.  I love Ann Wilson’s voice so it would have been great to hear another song or two, or seven. But it was good to hear her again, and I look forward to her album Immortal when it comes out on September 14th of this year.

(Unplayed Songs)
For What It’s Worth
Love, Reign O’er Me

Now if I’m being honest, Paul Rodgers is the main reason I wanted to attend this concert.  Paul is known for being the lead singer of the bands Free and Bad Company. Known as “The Voice” by his fans and peers, it’s no wonder he gave the crowd quite the performance.  The last time I saw Paul here in Utah was back in 2002 when Bad Company played the then titled E Center with Styx. He sounded amazing then, and unbelievably he sounds as good if not better than then.  How is that possible. He mixed the show between his two bands playing some classics and old forgotten gems. While many of the fans enjoyed the Free songs, it appeared to me that the majority of the audience was the most excited when Paul performed the Bad Company hits.  People went crazy when “Feel Like Makin’ Love” started. And a huge sing-along took place with “Shooting Star”.

Paul did his best to cool down the crowd by throwing water from his water bottles on the first few rows.  Fortunately, by this point, the sun had finally ducked behind the western mountains so the temperature finally started to go down.

Paul left the stage and was cheered back on to play the Free mega-hit “All Right Now”.  This was probably my favorite part of the entire evening. I love that song, and it was pretty clear that everyone else in the crowd  felt the same.  The crowd sang the chorus in full voice and the venue sounded as if it was at capacity.

I can’t imagine it’s easy to play in the heat, in a venue that is maybe a third full.  But Paul came out, played his songs, and seemed to really enjoy himself like a true pro. He sounded so good.  I hope he comes back on his own tour or a tour with Bad Company. It would be great to see him again soon.

The sun was finally gone, and the temperature was perfect for Jeff Beck.  Jeff is a guitar legend, known for having replaced Eric Clapton in The Yardbirds and leading the Jeff Beck Group.

I must admit it was a difficult transition for me to go from hearing two of the most iconic voices in the classic rock era to a mostly instrumental driven set from Jeff Beck.  Don’t get me wrong, it was amazing. He’s a guitar virtuoso. It just took me a minute to settle into what he was putting out.

His band was incredible.  Jeff’s drummer Vinnie Colaiuta was as good a drummer as I’ve ever seen live.  It was impossible at times to not just look at what he was doing in awe. Bassist Rhonda Smith had melodic bass lines that are not always heard from that instrument.  She was impressive. Vanessa Freebairn-Smith brought a special element to the show with her Cello. You don’t always see a cello as part of a rock band, but in this case, she fit right in.

Jimmy Hall walked on stage to sing vocals about three songs in.  He had a powerful voice and an engaging stage presence. I think he would enter the stage at just the time the audience seemed ready for a vocalist.  His highlight moment for sure was singing vocals during a cover of Stevie Wonder’s “Superstitious”.

It’s so interesting how we’re conditioned to hear a voice at the forefront of a rock band.  But what Jeff has done is put the guitar, sometimes the even the bass as the lead “vocalist”.  I felt at times as if Jeff’s guitar was singing to me and telling me the story. Once I was able to wrap my head around that, I was able to see just how deep Jeff Beck’s talent really is.  My favorite part of his set was when he played an instrumental version of The Beatles “A Day in the Life”.

All of the artists on the bill are legends.  I’m not totally sure if they should be on tour together.  Or maybe Paul Rodgers should have closed the show. The energy from the crowd just seemed to dip a little after he left the stage.  It was a great night of music, but the show was unfortunately not well attended and I’m not sure why. My guess is the combination of artists or the order of the lineup.  Either way, those that weren’t there missed out, and those who were there saw some great performances!

Encore:
You Shook Me
Going Down