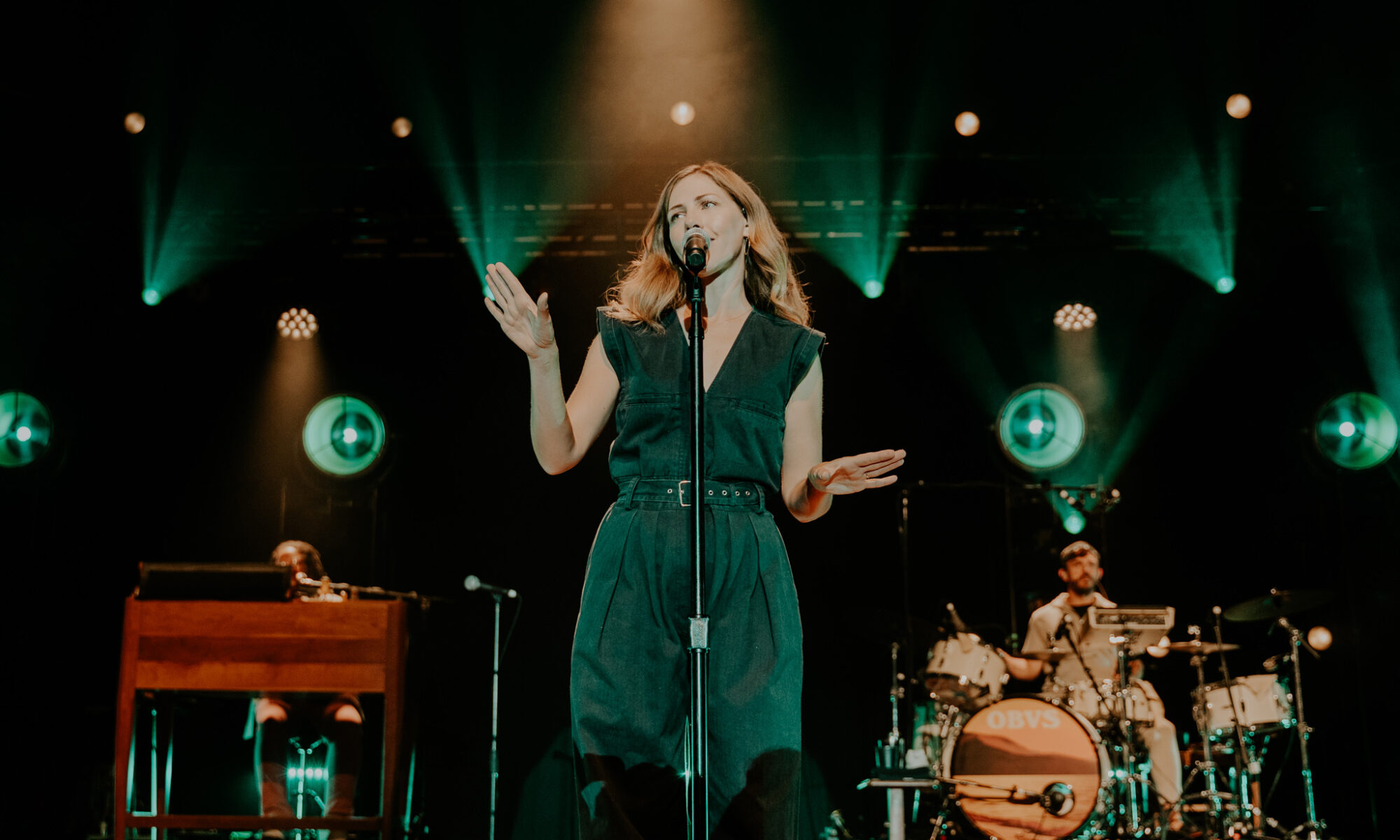 The last of the 2021 SLC Twilight Concert Series had the Gallivan Center buzzing with excited fans as Lake Street Dive took the stage in Salt Lake City on Friday night. The band joined a growing list of artists nationwide to require attendees to provide proof of vaccination or a negative test result against COVID-19 before entering the venue, bringing some ease of mind to a sold-out show. Almost two years since the COVID-19 pandemic rocked the music industry, I finally found myself back in the pit looking up at the stage through my camera lens. Giddy, nervous, and feeling rusty, I waiting in anticipation for a fun night.

Pixie and the Partygrass Boys

The show kicked off with a local favorite, Pixie and the Partygrass Boys. Starting the evening with “Home”, the signature Partygrass tune blended Katia “Pixie” Racine’s soulful, raspy voice with beautiful harmonies from the rest of the group. As cliché as it may sound, the minute that Partygrass started to play, I felt home. They continued the night with some all-time favorites, a unique blend of bluegrass sounds with funk and jazz influences. Long runs from Ben Weiss on mandolin and Amanda B. Grapes on the fiddle had the crowd on their feet, dancing. Their short, high-energy set left the fans wanting more. The jam band is just pure fun and their newly released album, “Snake Creek” is a must-listen.

Laufey, a rising Icelandic artist, followed Pixie and the Partygrass Boys. As a student at Berklee College of Music, Laufey gained a large following through her social media presence. As a huge fan of Lake Street Dive, even having auditioned for college with a Lake Street Dive song, she made her debut, opening for the band at her first-ever live show. Despite the nerves, Laufey filled the venue with soft, jazzy vocals that resonated with the crowd. It was clear that she had some big fans in Salt Lake City as the crowd cheered out, “We love you so much!”.

As the sun went down, Lake Street Dive took the stage with a packed audience. The “indie-alternative” band defies genres with a wide range of influences in their music from jazz to groovy beats reminiscent of the ’60s and ’70s to modern bops. Rachel Price delivered stunningly powerful vocals as she danced around the stage, exuding confidence and attitude.

They opened the show with a few favorites off of their new album “Obviously”, including “Know That I Know” and “Hypotheticals” from which the album got its name. The album effortlessly blends rhythmic grooves with more hard-hitting, serious lyrics that touch on a variety of today’s issues from gender inequality to anxiety and societal expectations. Effortless harmonies and upbeat tempos like “Hush Money” kept the crowd on their feet all night long.

At one point, Akie Bermiss’ silky voice rang out as he played the keyboard. Bermiss joined the group in 2017 and had a strong influence on their new album. Of course, the band played classics, like “Bad Self Portraits” and “Good Kisser” that had the crowd dancing late into the night. I walked out of the venue with a smile on my face, happy to finally be back.