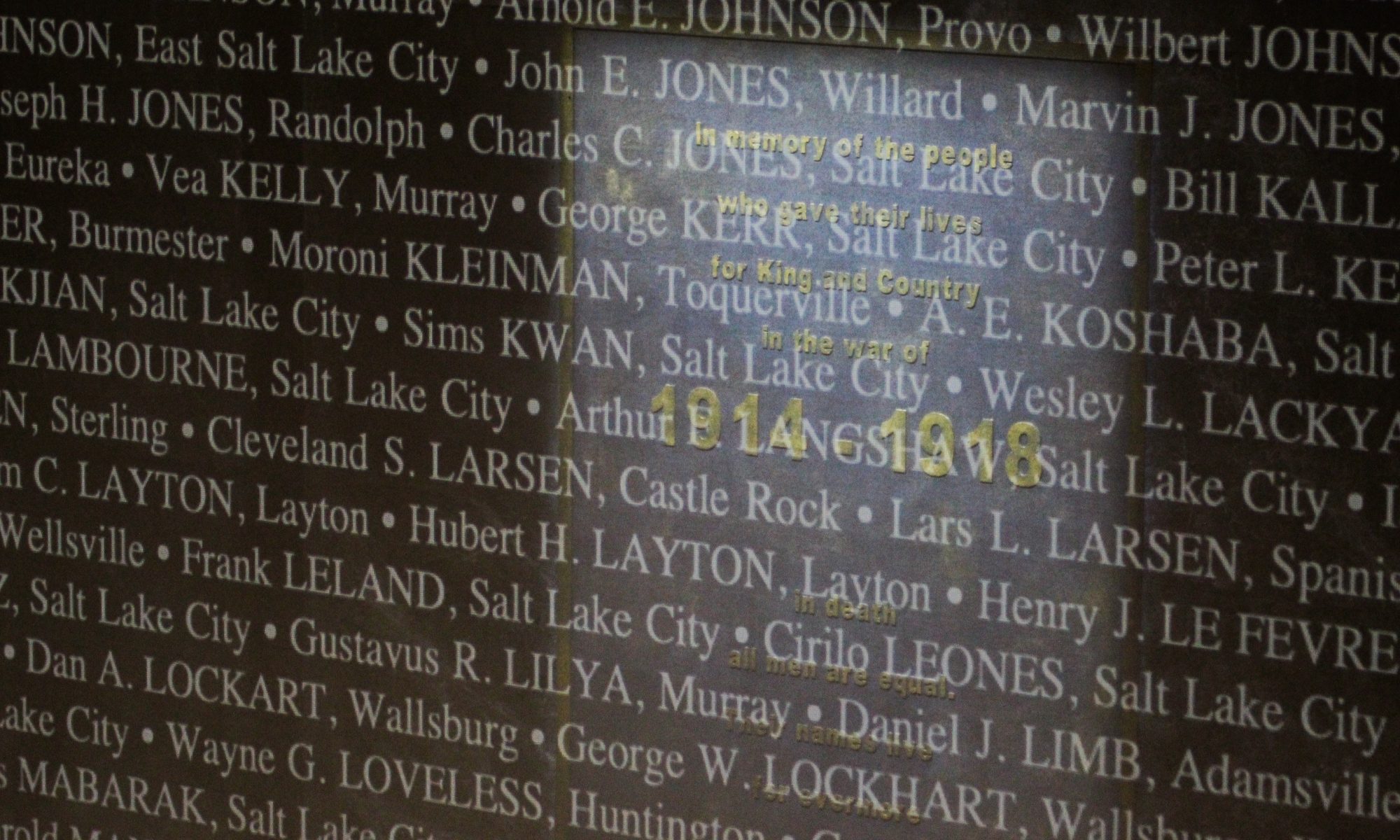 Utah Opera began the year at the Capitol Theater in Salt Lake City with an emotional performance of the opera Silent Night (Composer Kevin Puts, Lyricist Mark Campbell), which tells the story of the unofficial armistice between French and Scottish allied forces and German soldiers on Christmas Eve of 1914. The opera follows three groups of soldiers, the Germans, French, and Scottish, who spontaneously put down their weapons and traded gunfire for Christmas carols. Exchanged pictures of loved ones, chocolates, and a battlefield church mass bring the men on both sides of no man’s land much needed rest and peace, but the light of Christmas Day brings the realization that their shared experiences have failed to change their status as enemies.

The set boasted a large three-story gray stone edifice, not unlike the austere Stalinist architecture that would become popular in the years immediately following the first Great War. This stood in direct contrast to the luxurious and ornate architecture and trimmings of the walls and proscenium of the Capitol Theater, itself as old (built in 1913) as the story being told therein. In lieu of a curtain, the stage used a scrim that (through the magic of stage lights) could be translucent or opaque as needed, thus creating the possibility of movie-like scene changes or superimposed effects to accentuate the drama of the actors on stage. Images of dark, leafless winter trees, dark rolling fog, and splattered blood floated ominously over the war scenes portrayed by the actors on the stage. This cinematic quality was unexpected but mesmerizing and would be especially captivating for younger viewers used to the quick cuts and constant gratification of television and the cinema. Before the first downbeat and during the intermission, the scrim had projected onto it the names of WWI soldiers who came from Utah, totaling some 3,000 names. This powerful image initially evoked a reflective mood; but as the audience filed in and found their seats, more and more patrons pointed to a familiar name with a smile and spoke of relatives who fought during the war. The overall feeling was one of communal ancestral pride.

Pride easily remained a strong sentiment in the hall as the orchestra began to play the opening measures. The score, a mix of sometimes avant-garde modernism and more familiar neo-romantic music, was expertly played by the Utah Symphony. Most regional opera companies must rely on ad-hoc performers to fill the seats of the orchestra, but Utah Opera is lucky in that it has the practiced cohesion of a standing professional ensemble to provide a solid bedrock of artistry.  The brass section blazed through modern militaristic fanfares that were crisp and exciting to the ear, often modulating through several keys in the process. These melodies were obviously quite rhythmically complex, but the players were unfailingly accurate and single-minded in their execution. At several points, it seemed as if the entire orchestra were amplified by some hidden sound system, but this was of course not the case. Such swells are the natural byproduct of tuneful playing by professionals with impeccable intonation.

During the pre-concert lecture or Opera Prelude, Dr. Carol Anderson spoke about the diegetic music used in Silent Night. Simply put, diegetic music is music that exists within the story and would, therefore, be heard by the characters. It’s opposite, incidental music is, therefore, music not heard or known by the characters, and only exists to the audience. This mechanism was used throughout the piece to underscore the emotional dissonance the characters struggled with while trying to celebrate such a joyous holiday during the strife of combat. The orchestra moved seamlessly between these two different musical devices, playing simultaneously in different keys and (seemingly) different time signatures to great effect.

The singers, confident in the accompaniment provided, sang with ease and surety. Their conviction in their understanding of the score freed them to give stirring performances without being exaggerated or ham-fisted. In particular, was the portrayal of French Lieutenant Audebert by baritone Efraín Solís. While somberly naming a list of the dead and wounded, his thoughts continually return to his wife and unborn child. Solís’s portrayal was easy to watch, refreshingly real while still being readable for audience members in the back of the hall. His voice came easy and he navigated the upper ranges of his baritone voice with tenor-like grace. In an opera about war, the baritone voice is of course crucial. Baritone Troy Cook’s voice stood out amongst the beleaguered soldiers. Playing Scottish clergyman Father Palmer, Cook’s voice was always a welcome and exciting surprise. His voice was strong and clear, holding a simple beauty befitting a man of the cloth.

But perhaps the most important vocal moment was presented by soprano Abigail Rethwisch performing the role of professional singer Anna Sørensen, lover of Nikolaus Sprink – a fellow singer and German national, conscripted to fight and forced to leave his love behind. As Sørensen joins the men on the battlefield for an impromptu mass presided over by Father Palmer, the men grow silent and remove their hats as a sign of respect for the lady. She then sings the Dona nobis pacem, the traditional ending of the catholic mass blessing the congregation and bidding them to go in peace. Rethwisch sang this benediction a capella, which was hauntingly beautiful in juxtaposition to the deeper, harsher baritone of the male combatants. Her lovely voice set the tone for the end of act one, soaring literally and figuratively above the men who knelt in religious worship, seeking peace during bloodshed. Rethwish’s voice was a breath of fresh air, replete with sincerity and musicality. As her voice faded, the mass translation of “go in peace” laid heavy irony on the group of war-weary soldiers.

As the performance ended, the audience rose in ovation and applauded the masterful efforts of the singers and instrumentalists. They cheered in delight and surprise as the Composer and Librettist both came out on stage for a well deserved bow. Without a doubt, Utah Opera can consider this production a triumph of technological and musical art made accessible for both the musical amateur and seasoned theatergoer alike.

The run of Silent Night continues on January 20th, 22nd, 24th, and 26th of this month. More tickets and information, including the Opera Prelude, can be found at utahopera.org.