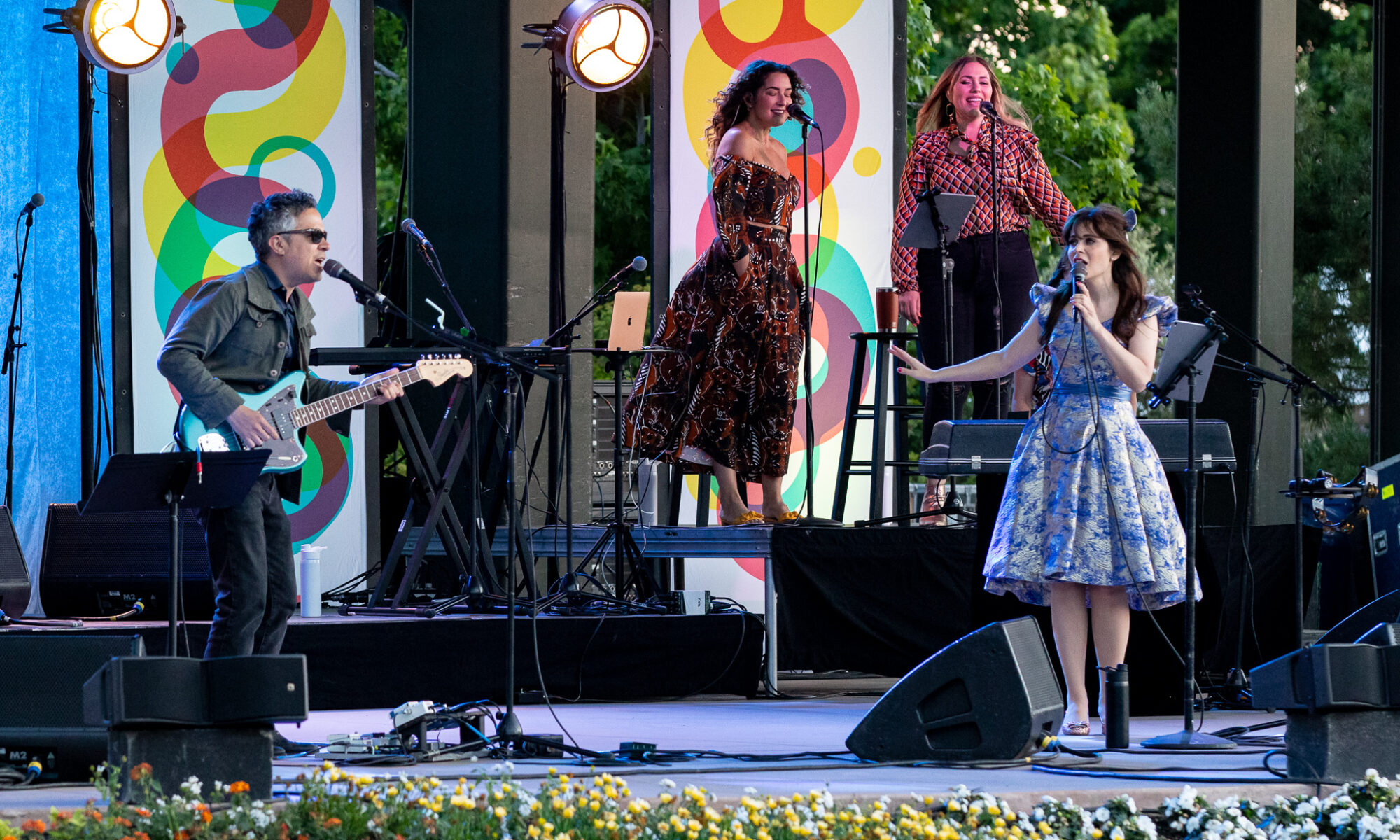 When Red Butte Garden announced the 2022 lineup for their Outdoor Concert Series I was beyond excited to see She & Him as one of the bands.  They hadn’t been to Utah in a while and I felt like Red Butte Garden Amphitheater was a perfect setting to see them.  When I saw that they would be touring to promote their album Melt Away: A Tribute to Brian Wilson, I knew I had to cover this show.  Little did I know how attached to this show I would become.

I was contacted and invited to interview M. Ward (Him) leading up to the show.  After chatting with Ward and learning more about the album and the band’s love of the great legendary songwriter from The Beach Boys, I knew it was a show not to be missed.  In fact, the actual Brian Wilson was playing over at USANA Amphitheatre on the same night, and I still chose to be in Red Butte Garden for this show. That’s how much I wanted to be there! And the night did not disappoint.

It was a little windy, and the temperature had significantly dropped by nightfall, but people showed up for the opportunity to hear the beautiful voice of Zooey Deschanel, the guitar mastery by M. Ward, and their perfectly blended harmonies. The show opened with “Deirdre” followed by, “Good to My Baby”.  I loved seeing that the songs on Melt Away were going to be a mix of Wilson favorites as well as some great songs that people might not be familiar with.

The crowd became even more excited when they heard the next two more familiar songs from The Beach Boys, “Don’t Worry Baby” and “Wouldn’t It Be Nice”. While the tunes were familiar, it was nice to see She & Him work their magic in making these songs in both arrangement and sound, their own.

Zooey Deschanel shared with the audience that Red Butte Gardens Amphitheater was one of the most beautiful places to play in the country. “We love playing Salt Lake City.  We love Salt Lake City fans!” was met with delight from the audience.  I have to admit, it was surreal to see her on that stage.  I’ve seen her so often on screen, but it was a new experience seeing her in person.  And getting to hear her sing live was a pleasure.  She has such a unique voice.  It’s one of those voices where you know it’s her upon first hearing.  I thought her voice really shined in the album title track, “Melt Away”.

Deschanel did most of the crowd work.  She seems so suited for that.  She was her famously quirky self. Before beginning a song she said, “So it’s kind of chilly out.  If you get chili thin of me and how chilly I am and feel good about your blankets.”  That was followed by various offers of coats and blankets.  She politely declined and a cup of tea was eventually brought to her from backstage.  It seemed to help for a while.

Towards the middle of the set they moved away from some of the Brian Wilson penned greats and mixed in some favorites of the She & Him catalog.  A personal favorite is their cover of “Gonna Get Along Without You Now”.  People were swaying and dancing and singing along to that one.  I thought the backup singers really popped in this song. There’s something so satisfying about hearing a perfectly blended harmony.  It’s one thing to get the notes right, it’s another for the voices to work together so well that the harmony feels that much richer.  That was the case with this song, and truthfully the entire night.

I was happy that included in the set was an M. Ward solo release, “Magic Trick”.  I wasn’t expecting it so when it was performed I was pleasantly surprised.  It’s a short song, but the crowd wasted no time getting into this one. During this song the thought came to me that M. Ward is due to stop by Utah on his own soon.  It would be so good to hear more of his songs live again.

Zooey asked the audience to fact-check something for her.  She shared that her son, Charlie, is really into dinosaurs.  He told her that there was a dinosaur called a Utah Raptor.  “Is that True?” she asked.  The crowd roared in the affirmative!  I think Charlie will be excited that we backed him up.

Speaking of kids, Zooey also stated, “I love that there are kids in the audience!”.  She asked if it was any of the kid’s first show ever.  There were some cheers from the crowd.  Deschanel made her way downstage to a young girl named Pearl.  “Pearl, I’m honored our concert is your first.  We want to dedicate this next song to you.”  There was a pause. “Well maybe not this next song.  It’s really sad.”  M. Ward suggested that it was PG-13.  Deschanel suggested that it wasn’t quite that but that they would dedicate a different song later to Pearl.  Which they did.  The entire exchange was hilarious and sweet and indicative of the good nature of this band.

They played “Change is Hard” which really would not have been a great song to dedicate to Pearl.  However, it was performed beautifully. They continued through the set playing great songs of theirs like, “I Thought I Saw Your Face Today” and “In the Sun”.  They finished their main set with the upbeat “Why Do You Let Me Stay Here?”. Fans were up dancing, and the patio east of the stage was full of She & Him fans dancing and singing along.

Deschanel and Ward returned after an encore break without the rest of the band.  Zooey appeared with a blanket wrapped around her. She showed the audience that it was a She & Him blanket.  They performed their brilliant cover of Smokey Robinson’s “You Really Got a Hold On Me”.   They sounded so great together.  It was really cold at this point, but that didn’t dissuade them from sitting in the moment and letting the audience get the full experience of this song.

The band returned and the tempo picked up.  They performed “Do It Again” a song that will feature Brian Wilson on Melt Away.  This felt like the highest the energy had been the whole night. Ward sounded great taking lead on this song.  People were clapping and dancing and just totally ignoring the cold.  I loved the people who truly appreciated this band.  I can’t wait to hear this on the album with Brian Wilson.

The night ended appropriately with two She & Him songs, “I Could’ve Been Your Girl” and “Sweet Darlin”.  I enjoyed the way they mixed songs from their upcoming album with their own songs.  They seemed to transition seamlessly between each other.  They all felt like She & Him songs.  M. Ward and Zooey Deschanel departed the stage as the band played them off.  But not before Zooey made her way back to Pearl.  She gave the She & Him she was wearing during the encore to Pearl.  The crowd cheered for Pearl’s new gift.  It was a perfect way to end the night.

Despite some winds and cool temperatures the night went off without a hitch.  She & Him sounded excellent and I envy anyone who gets to see them later in their tour.  I’d love to see them again.  Their new album Melt Away: A Tribute to Brian Wilson will be released Jul 22, 2022.  I encourage any She & Him or Brian Wilson fan to get this album.  Judging by the songs I heard in this concert, it’s going to be a good one.