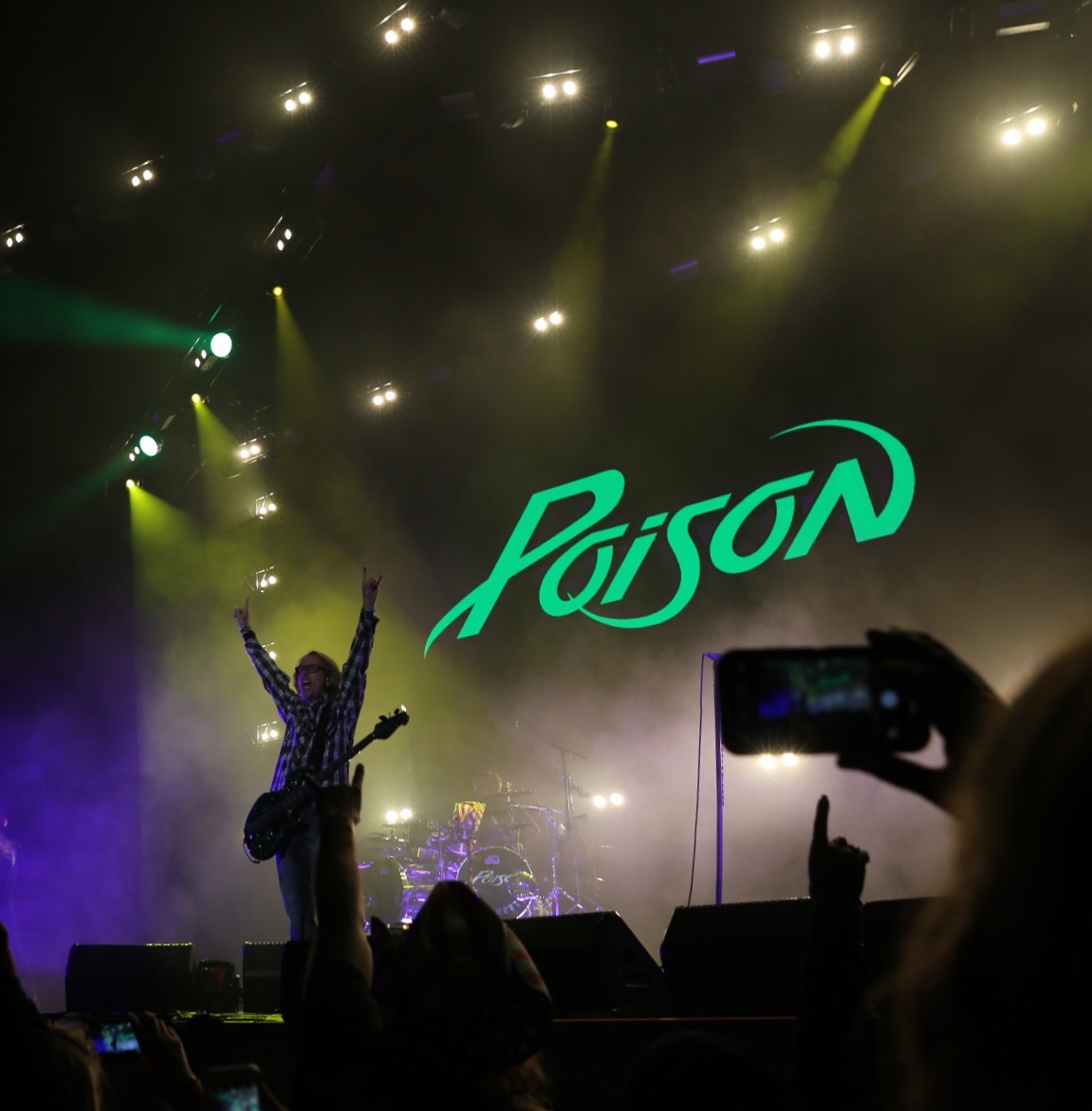 As I was driving out to USANA Amphitheater for the first time this season, the sun was shining and it was a perfect 72 degrees.  But on the horizon, in fact, headed right towards West Valley where USANA Amphitheater is located it was impossible to miss a very different picture.  A dark cloud was rolling in fast! I knew this was a rain or shine show, but I’m sure like anyone heading to an outdoor concert, I preferred there be more shine than rain.

When I arrived, it appeared that Cheap Trick was about to take the stage.  The fog machines were on, and the crew was leaving the stage. But just then, I noticed the huge elevated speaker stacks lowering to the ground, and the crew rushed back to cover the soundboards and equipment as the wind picked up and the rain started to fall significantly.  At that point, someone took to the microphone and announced that there would be a slight delay to allow the weather to improve.

Ultimately this worked out in Cheap Trick’s favor because more people en route to the show would be there in time to see them.  As the rain diminished, Cheap Trick frontman Robin Zander walked on stage in a fur coat and his signature shiny police captain’s hat. He stood there, looked out to the crowd without saying a word.  His presence signified that the show was about to begin. 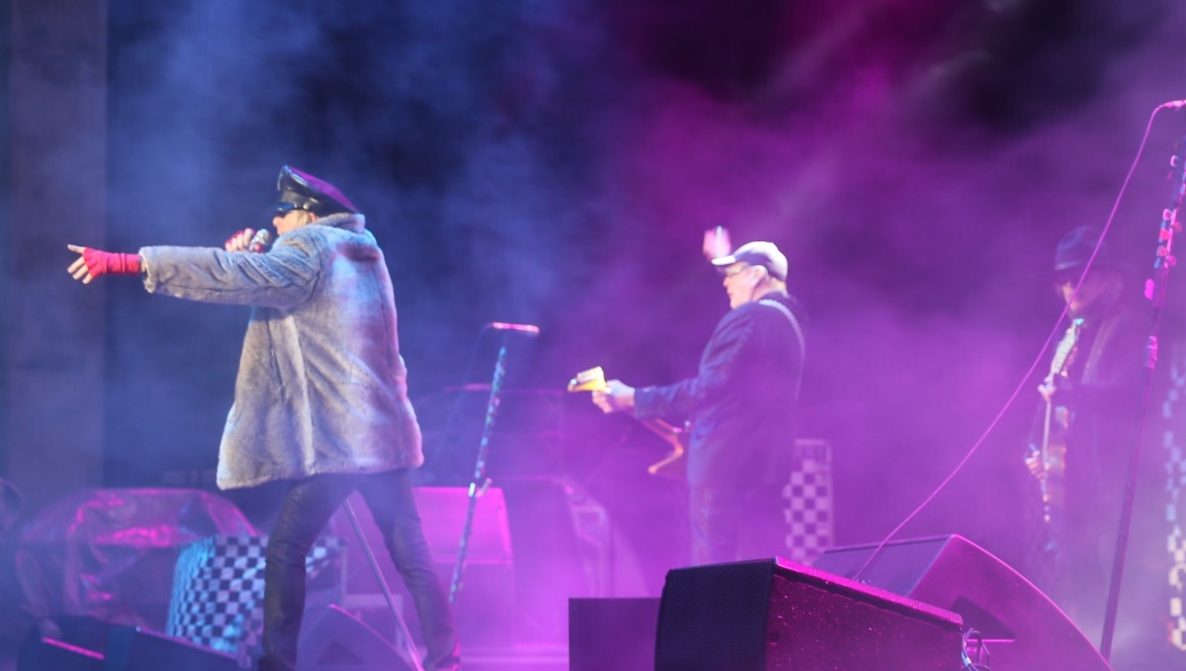 Sure enough, the speakers were lifted, the plastic was removed and Rock and Roll Hall of Famers Cheap Trick took the state.  It took a minute for things to settle in. The crowd was shuffling back to their seats, removing parkas, wiping the water off of their chairs, maybe a little distracted by the rain delay. 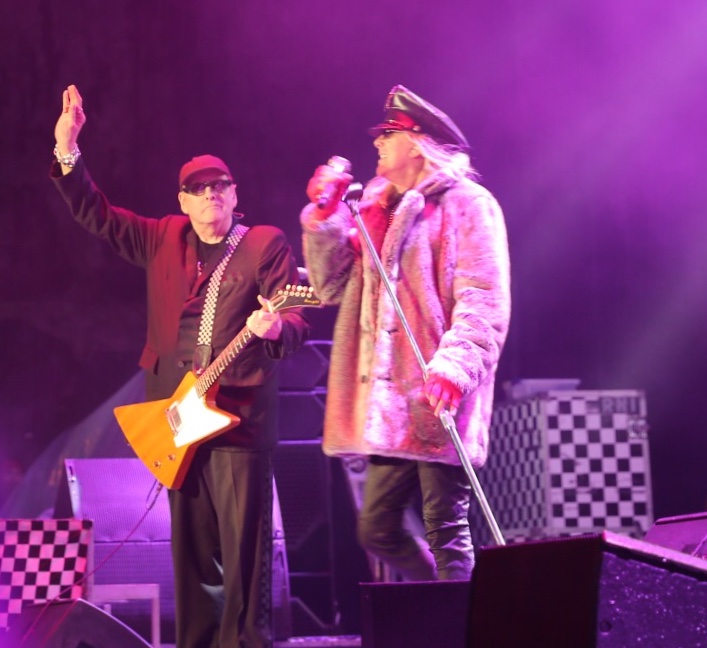 But about halfway through the ten song set, It seemed like everyone locked in on the moment.  The band was in good form, and the crowd was now focused on the legendary and extremely influential rock band.

The crowd sang along to such hits as “The Flame”, and “I Want You to Want Me”. Now we were off and running.  Guitarist Rick Nielsen cracked the audience up when he told us they were getting ready to release their “150th album” when in fact, it will be their 20th. He stated that if we hated the song it was only three minutes so it would be over soon.  The song “Here Comes Summer” fit right in with the rest of the set. 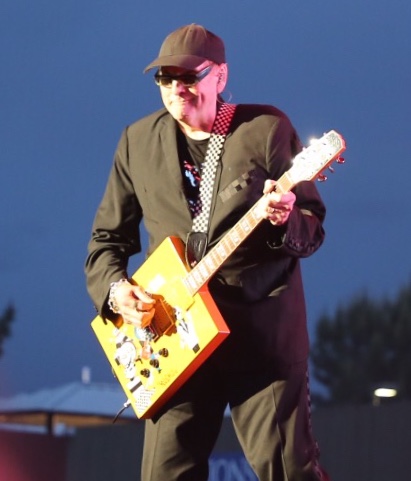 There seemed to be some confusion on if the band was going to cut their set short due to the delay, or play a couple more.  I’m not sure if they cut some songs or not, but they played a few more songs and I’m glad they did. I would have been disappointed if I didn’t hear “Surrender”, which was one of the songs they finished with.

Rick Nielsen threw out literally hundreds of guitar picks to the crowd.  And what would be a Cheap Trick show without an appearance from Rick’s custom made five neck guitar?  Rick left the stage and returned with it just in time to finish their set with “Auf Wiedersehen”. 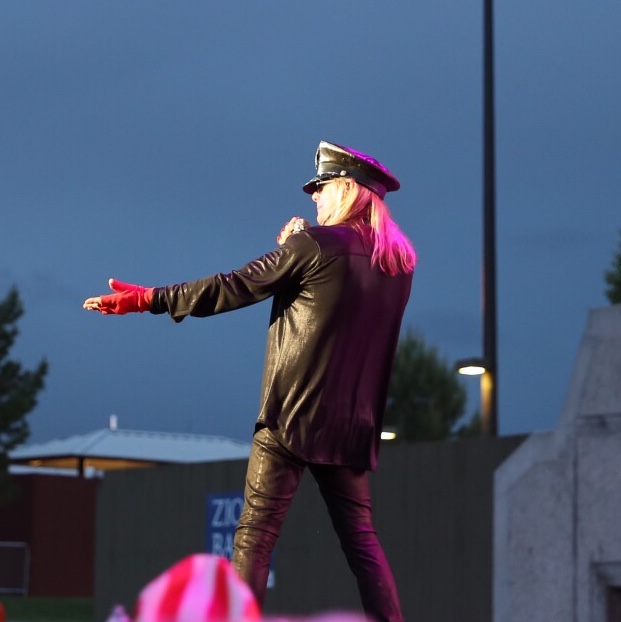 Cheap Trick handled the rain delay perfectly.  It was a perfect warm up for what was in store for the rest of the night.  Cheap Trick is an iconic band and I’m really glad I got to see them. 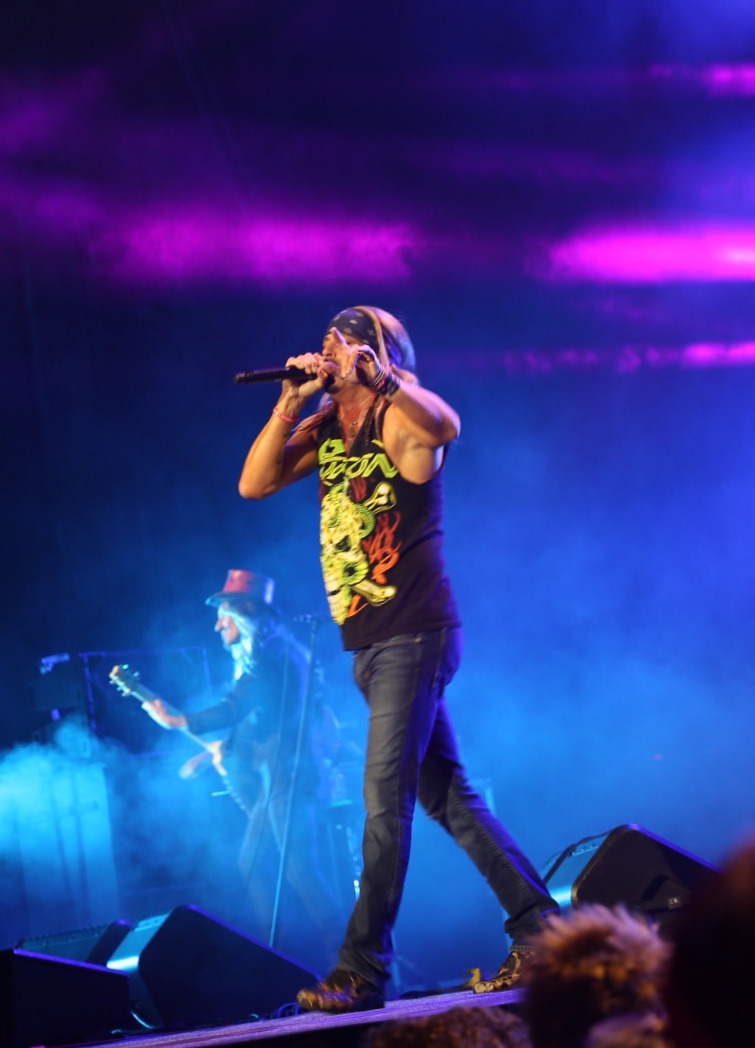 Due to the rain delay and USANA Amphitheater’s 11 o’clock curfew, the crew had to work fast to switch out Cheap Trick’s gear and move Poison’s in.  I’ve got to say, they did an incredibly efficient job. Poison took the stage within ten to fifteen minutes of Cheap Trick leaving.

Now to me, Poison is one of those bands that people absolutely love, or absolutely love to hate on.  And I think Poison must know this.  They work hard on that stage to give their devoted fans a night they’ll love, and put in an effort to win those over that might not be so sure about them.

For the first three songs of Cheap Trick and Poison, I was at the front of the venue taking pictures.  One of the security guards was telling me that he was looking forward to Cheap Trick, but wasn’t too interested in the Poison part of the night.  I found it funny that by the third song in Poison’s set this same security guard was bobbing his head, and singing along to “Ride the Wind” with the rest of the crowd. 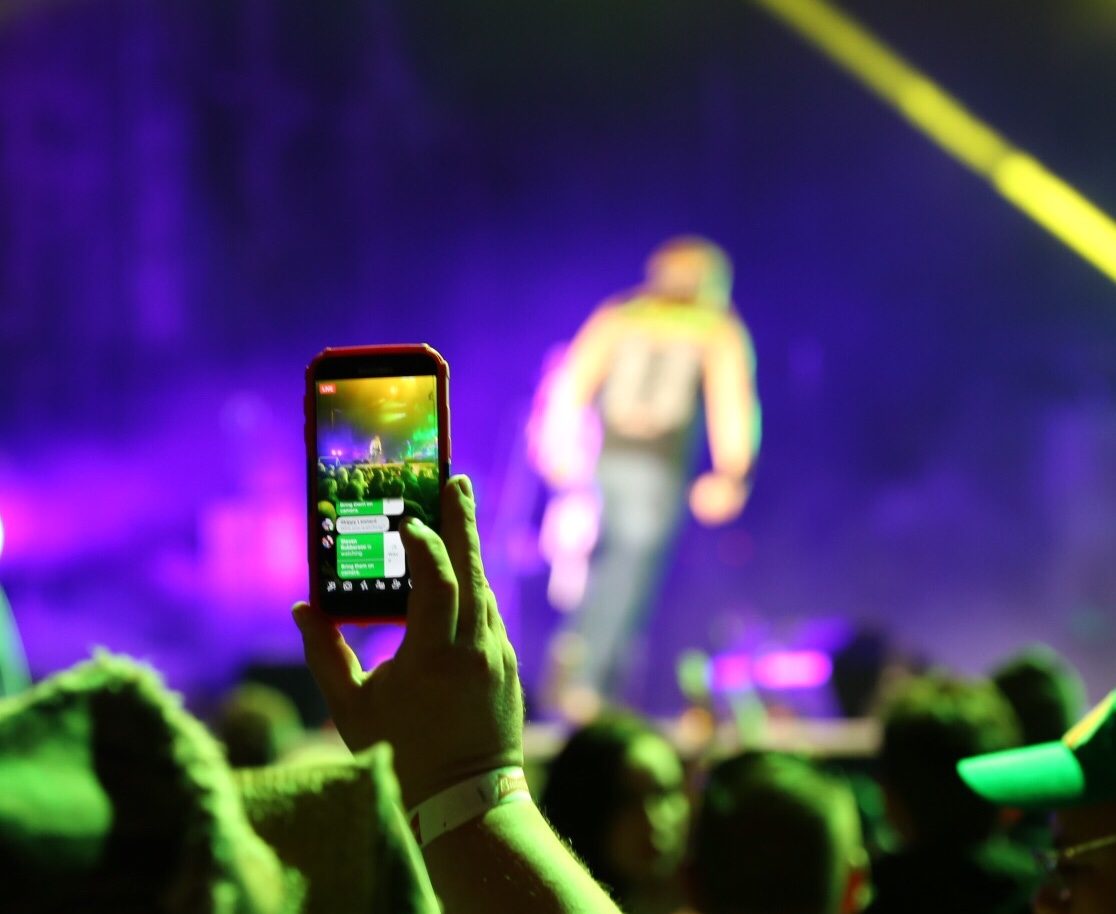 This tour is called the “Nothing But a Good Time Tour 2018”, of course referencing their monster hit of the same name.  As corny as it is to use the name of a song, or the name of a tour to describe the night’s events, there is simply no other way to describe this show.  It really was a good time. They took  the stage and opened with “Look What the Cat Dragged In”.  It was light speed ahead from there.  I barely had time to recover or take a mental note for this review before they were ripping into the next song! 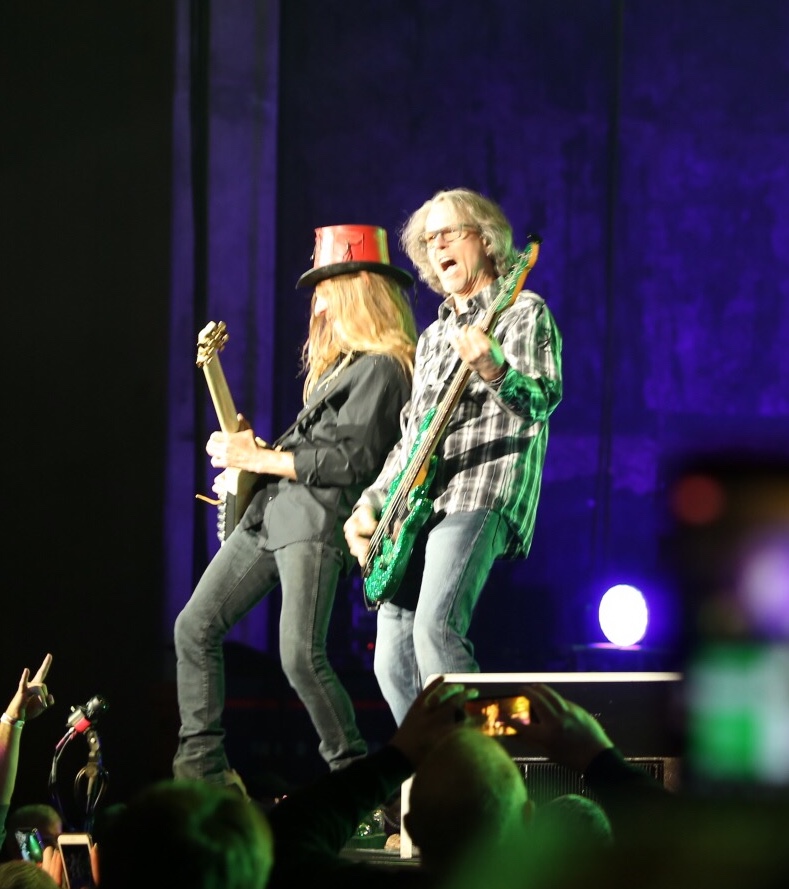 I have to give it to Bret Michaels, he’s an excellent front man.  His energy knows no bounds. He was jumping, clapping, running, dancing, and still singing the whole night.  He never seemed to be out of breath, or to even slightly slow down. I was so impressed. After several songs, throughout the night he’d say something like “Let’s just keep this going!”, or “We’re gonna keep this train rolling!”  as they jumped into the next high energy song.

I had the opportunity to interview bassist Bobby Dall a few weeks back leading up to this show.  I asked him if there was a song that he really looked forward to playing above others.  He mentioned “Ride the Wind” was always a favorite, but then he stated that he never tired of playing any of their songs.  I found that hard to believe since they’ve played these songs over and over thousands of times. But after watching him play in person, I have changed my mind. He looked like he was loving it up there. He seemed into every song  and just totally fired up to be playing in front of this crowd.  He was a pretty mellow guy during our interview, but he was far from that on the stage. I loved it. 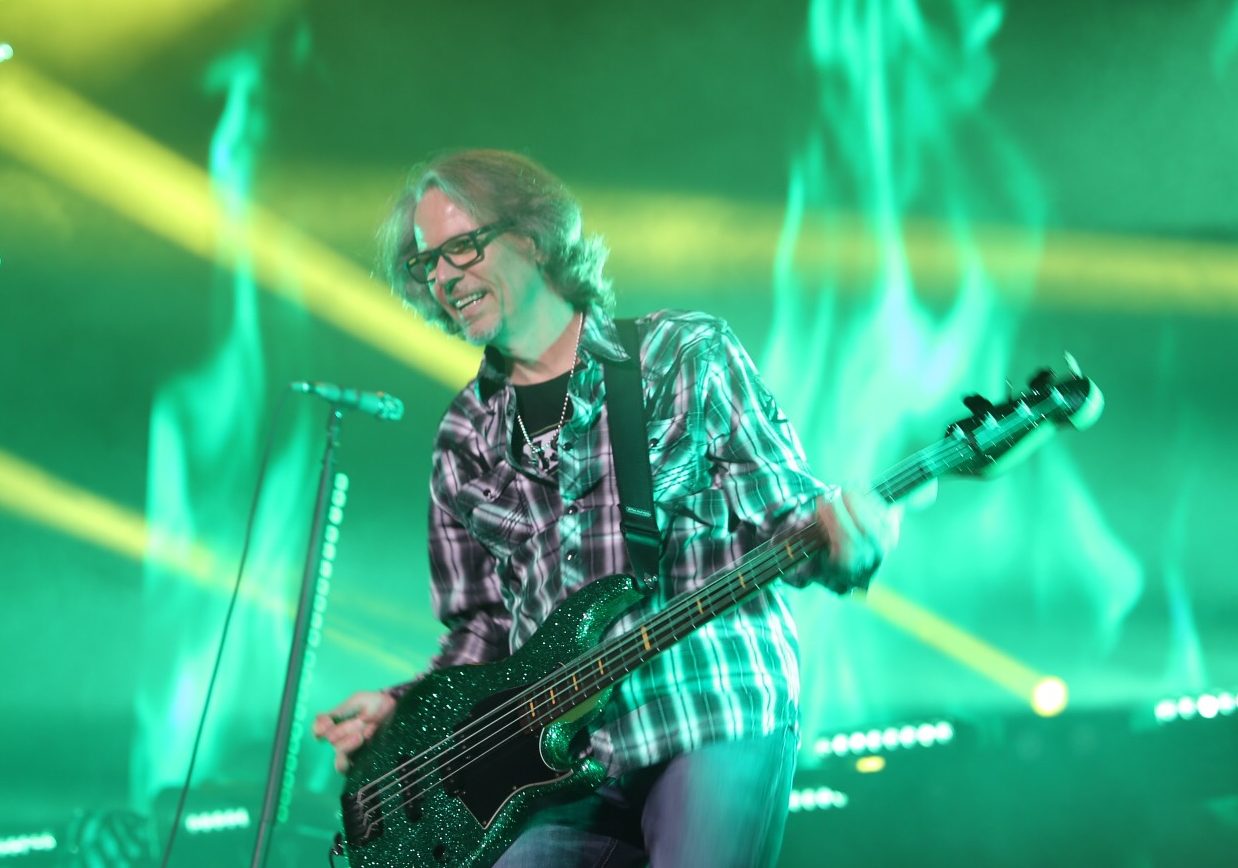 C.C. Deville, which by the way,  is one of the greatest lead guitarist stage names in history, was also really fun to watch.  There has been so much turmoil in this band over the years, but I was happy to see that it looked like he and the rest of the guys were in a great place and having (here I go again) a good time. 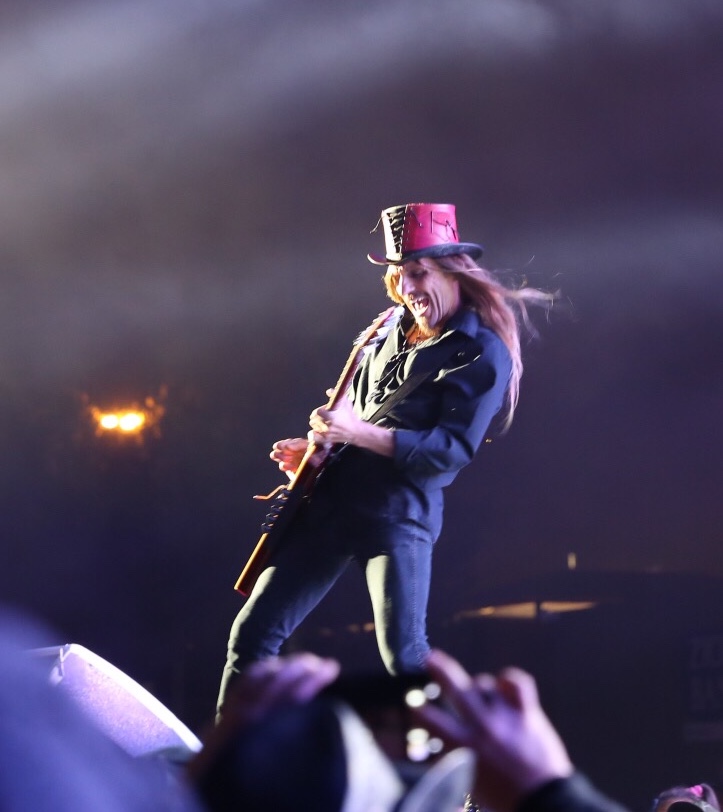 I thought his guitar playing was as good as it’s ever been, and the crowd seemed to think so too.  He received one of the loudest cheers of the night when he finished his guitar solo.

Rikki Rockett (Another fantastic stage name!) is a really entertaining drummer to watch.  Due to the nature of the instrument, most drummers are animated. But Rikki adds an extra flair and showmanship to his playing that fits this band perfectly.  I enjoyed his drum solo which concluded with Bobby Dall returning to the stage to duet the “Pink Panther Theme” with Rikki. From my vantage point, I could see a little boy off stage with glowing noise cancelling headphones and drumsticks.  I’m assuming this was Rikki’s child because he came on stage and played with Rikki during the encore.

From what I can tell, the setlist was condensed by maybe one or to two songs.  So really, not a big deal. However, they played their biggest hits. And I have to admit, I had forgotten just how many hits these boys had!  They paid a special tribute to the military with a heartfelt rendition of “Something to Believe In”. They had the crowd at full voice singing along to “Talk Dirty to Me” and “Your Mamma Don’t Dance”.  And of course, they brought down the house with their number one hit, “Every Rose Has its Thorn”.  Couples were slow dancing, others were singing along, and of course, cell phone lights were beaming bright replacing the lighters that I’m sure Poison used to see fill their audience back in the day.

Poison finished their main set with the title of this tour, and I guess what could also be the title of this article “Nothin’ But a Good Time”.  USANA Amphitheater was electric. The stage lights were amazing, the people were so happy, and I could tell the band was totally happy with the reception.

In the past several years Poison has been a part of these package tours where there will be three bands of a certain era or genre touring together.  For example, I saw Poison open for headliner Def Leppard, with Lita Ford going before Poison. But on this tour, Poison is the headliner and closer of the show.  I think it’s the right place for them. With these songs, this energy, and this fan base, I hope they headline their tours from here on out.

The band came back for their encore and sang a cover of the great KISS anthem “Rock and Roll All Nite”.  The place went wild, sang every word, and danced as if it was 1987.

I brought my high school friend Jamin with me to this show.  For the sake of context, Poison was at their height when we were in 5th and 6th grade.  He mentioned before that he wasn’t really a Poison fan. Not a hater, just enjoyed a different type of music.  He stated that the only song he really knew was “Every Rose Has its Thorn”. But as I was dropping him of for the night he said “You know, like this band or not, they’re really good, and they put on a great show. That frontman was so entertaining.  They did a really good job. I really liked it.” That tells me that Poison did exactly what they set out to do here in Utah. 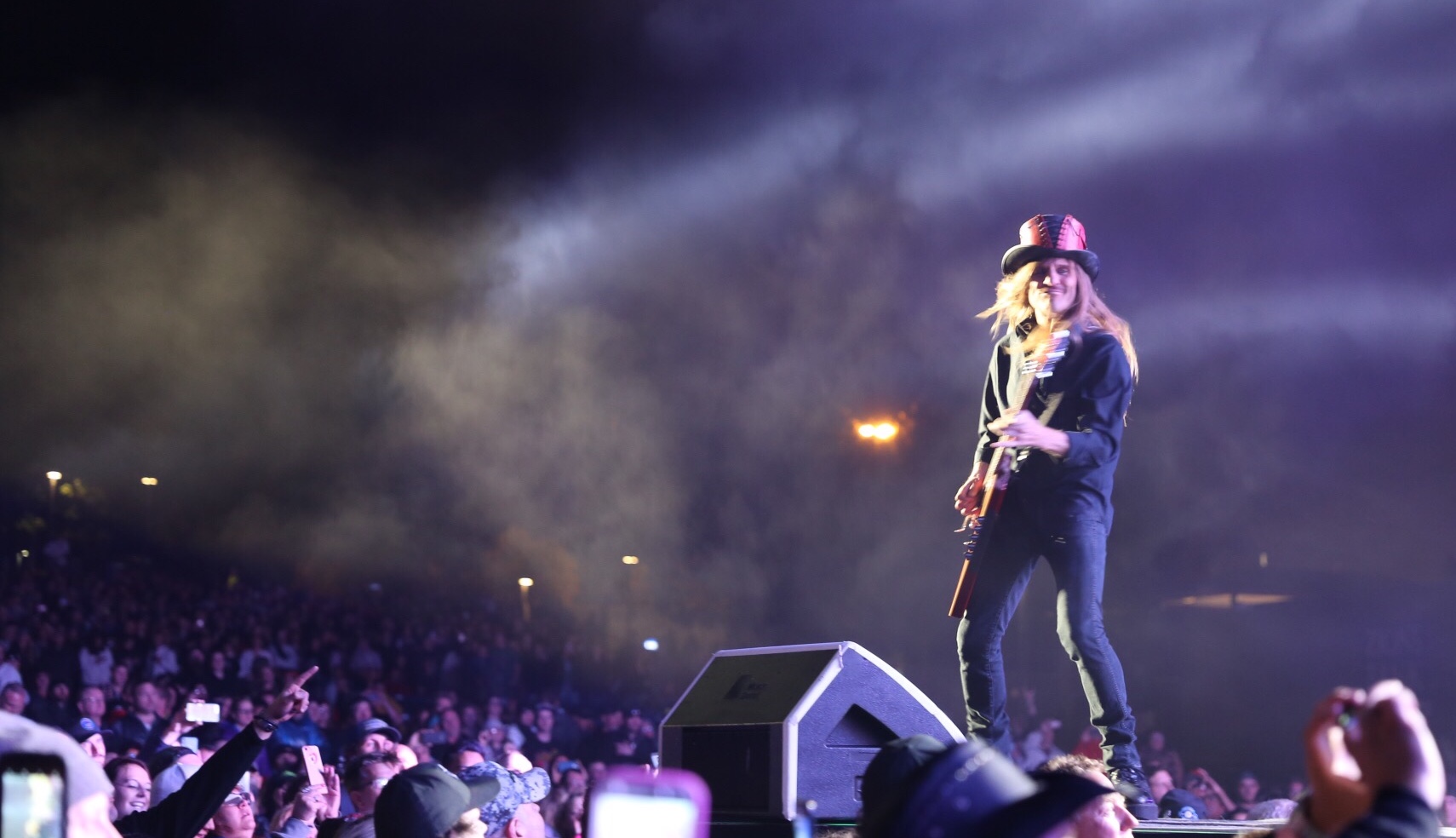 Poison is a band that represent a specific era of music.  Things back then seemed care free and all about looking for “Nothin’ But a Good Time”.  With the way things seem today, it was nice to feel that care free for a couple hours.