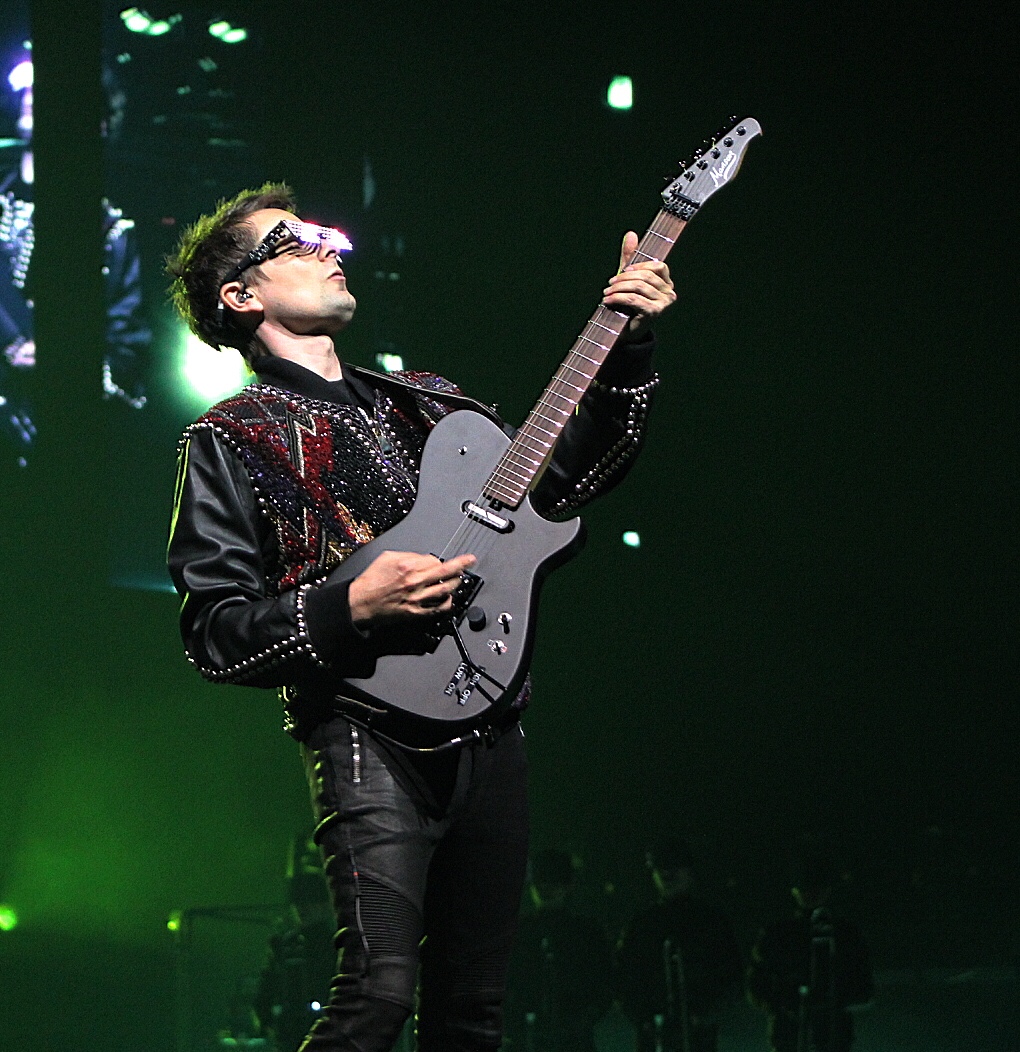 I have seen Muse three times here in Utah. In 2013 at the then named Energy Solutions Arena, on The 2nd Law Tour, in the summer of 2017 out at USANA Amphitheater for the American Summer Amphitheater Tour, and then on February 28th at Vivint Smart Home Arena on their current Simulation Theory Tour.  All three of these tours were so different, yet so entertaining that it took me weeks to stop thinking about them.

The concert this past Thursday was vastly different from the other Muse concerts I’ve seen. The album Simulation Theory is different in many ways than past Muse albums, so it makes sense that the concert itself would be different.  While Muse has always used synth and drum machines in their music, it seemed as if both were more strongly featured in this album.  The album and tour seemed to be influenced by science fiction and electronic sounds of the 80s while incorporating modern themes such as political and social issues of today.  It seems like it might make for a strange show. But it worked. And by worked, I mean it was mind blowing!

The arena went dark, and the words “We are caged in simulations” appeared on the enormous digital screen backdrop.  The the opening song on the Simulation Theory album “Algorithm”  began. Then about ten or so dancers marched onto the stage holding huge trombones at their side as if they were rifles.  They marched down a long catwalk that reached the center of the arena floor. When they arrived at the end of the catwalk they moved into position encircling the mini stage at the end of the catwalk.  The soldiers then raised their “weapons” and pointed them to the sky. They then proceeded to play their trombones. To be honest, I couldn’t tell if they were really playing or if it was just for show because as I tried to look in close at their playing, stage fog and a blue-green light appeared from behind them.  The soldiers then turned and faced the middle of the endstage still pointing their trombones in the air. As they turned back around, frontman, Matt Bellamy made his grand entrance as he was lifted from underneath the stage. To no surprise, the audience went berserk! Bellamy continued to rise up above the soldiers with his guitar strapped to his back, a lit up robot hand that shot lasers throughout the arena on his left hand.  He also donned digitally lit glasses. As “Algorithm” wound down, the soldiers lined the catwalk as Matt shredded his guitar solo. And that was just the first song!

Bellamy sprinted back to the main stage and when he got there he and the rest of Muse jumped into “Pressure” a single from Simulation Theory.  The audience went nuts as the first guitar riff blared throughout the arena.  Drummer, Dominic Howard, stood up and banged his drumsticks together encouraging the audience to join him.  And join in they did. This is one of my favorite songs off of Simulation Theory.  At this point of the show I was down on the arena floor taking pictures of the band.  Well, trying to take pictures. I had to keep reminding myself, “I’m here to cover this show.”  But I’m a Muse fan so I found myself singing along and bobbing my head to the music. So unprofessional. After “Pressure” I leaned over to the journalist beside me, who had stated to me while we were waiting for the show to start that she was also a big Muse fan, that all my pictures were probably terrible because I was moving so much to the music.  She nodded her head as if to say she was feeling the same way.

The time came for me to head to my seat and watch the rest of the show from there.  I love being on the floor for shows, so I’m glad I had the opportunity to be down there for the first three songs taking pictures. For this concert, however, I was glad to be seated where I was.  There was so much to visually take in, so I was happy to be a few rows up so I could see everything that was happening. As I reached my seat, the recognizable drum beat of “The Uprising” began. As if the audience wasn’t already amped up, this took the show to a whole new level!  Matt Bellamy returned to the end of the catwalk, this time with just a microphone in hand encouraging the crowd to sing the chorus themselves. The audience was deafening in their response. This song has such pulsing beat, and is so full of passion that it’s impossible to not scream out the chorus with everything you have.

Five of the first nine songs were from the new album.   the moment I thought, ‘“Oh, they’re doing a lot of new songs early on.”  Then I leaned over to my friend and said, ‘You know they’re doing a lot of new songs, but I don’t really mind.  These songs are so good live!’ And he looked back and agreed. Especially when his favorite song from Simulation Theory, “The Dark Side” began.  I don’t think there are a lot of bands that after twenty years, you’re still excited to hear new tracks live.  But I was really into the new songs. That being said, when songs like “Plug in Baby” or “Super Massive Black Hole” were played, there was a definite excitement from the audience. Especially with “Super Massive Black Hole” because it was introduced with the theme to Close Encounters of the Third Kind.

One highlight for me, in particular, was when bassist, Chris Wolstenholme walked out to the end of the catwalk and began playing the intro to “Hysteria” one of my favorite Muse songs. And by the sound of the audience, a favorite of pretty much everyone there.  Chris has this very stoic and calm stage presence about him, but his baselines are anything but. And while we’re praising the guy, his vocals are seriously underrated. Matt Bellamy has an incredible voice and deserves all the credit in the world for how awesome he sounds, butut Chris’ harmonies  and backing vocals add so much depth and artistry to the songs.

Muse is known for their big songs and massive effects both with the guitar, bass and even with their drums.  So it was a rare, but impressive twist when all three band members walked to end of the catwalk and played an acoustic version of “Dig Down”.  It was a different way for them to show off their skillset. As they played, the entire arena lit up with the flashlights on everyone’s phones.

I’m sure you’re getting the idea that I could probably break down each and every song from the set.  The simple fact is that Muse does not hold back on production. From the digital screen showing 80’s themed visuals in neon, to Bellamy’s glasses displaying all of the lyrics while performing “Madness”, to the dancers being lowered to the stage from above, an arcade game appearing in the middle of the stage, the dancers returning to the stage in huge robot alien costumes, or the massive amounts of confetti  and streamers raining from the sky during “Mercy”. Each song was like major production on its own.

Speaking of production, I think the thing that stood out the most was when Muse played a medley of “Stockholm Syndrome/Assassin/Reapers/The Handler/Newborn”.  While they were playing this medley I, and I’m sure the entire arena, noticed a huge hand planted behind Chris Wolstenholme. All of a sudden this enormous robot alien that had been featured in video and costume throughout the show appeared from behind the band.  And by appeared I mean the thing was probably 30 feet high. Its mouth moved, and its right arm reached out as it was trying to grab members of the band. At one point in the medley, the alien robot actually reached down and grabbed Matt Bellamy. It was like Iron Maiden’s Eddie in space.  As I looked around the audience I think just about every phone was out taking video of this thing. It was huge, and the detail made this inflatable look so lifelike. I just looked around at everyone looking to their friends lifting their jaws from the floor. People were going crazy about this thing.  The medley went on for at least ten minutes, and not one time did anyone seem to become less amazed at the enormous creature. And of course, once a new song in the medley began they would return from their state of shock and embrace the music.

This show took that place in that spot in the universe we didn’t know existed where Stranger Things meets Alternative Rock.  People definitely got their money’s worth. Not only was the production top notch, but the music was fantastic.  Matt’s vocals were perfect, and each song felt like it was better than the last. I was not ready for the show to end even though it had been two hours. They finished the evening with “Knights of Cydonia”.  And following that song, there isn’t much to do than just end the show because that song is so grandiose and epic that it seems impossible to follow.

When I think of Muse, I think of a band like Queen.  They don’t sound alike at all, but their songs belong in arenas and stadiums.  I can’t imagine going to a club or theater and seeing these songs performed. When I saw Muse at USANA Amphitheater, and while a large venue, it felt a little weird seeing them  in that setting. Muse belongs on that large arena stage with all the production that goes with it.

I loved this show so much.  I still can’t stop thinking about it.  And I know I’ll be listening to Muse for weeks after.  If you haven’t seen Muse before, you need to. Even if you only kind of like them, go see them.  They sound great, and your eyes will be stimulated beyond belief!