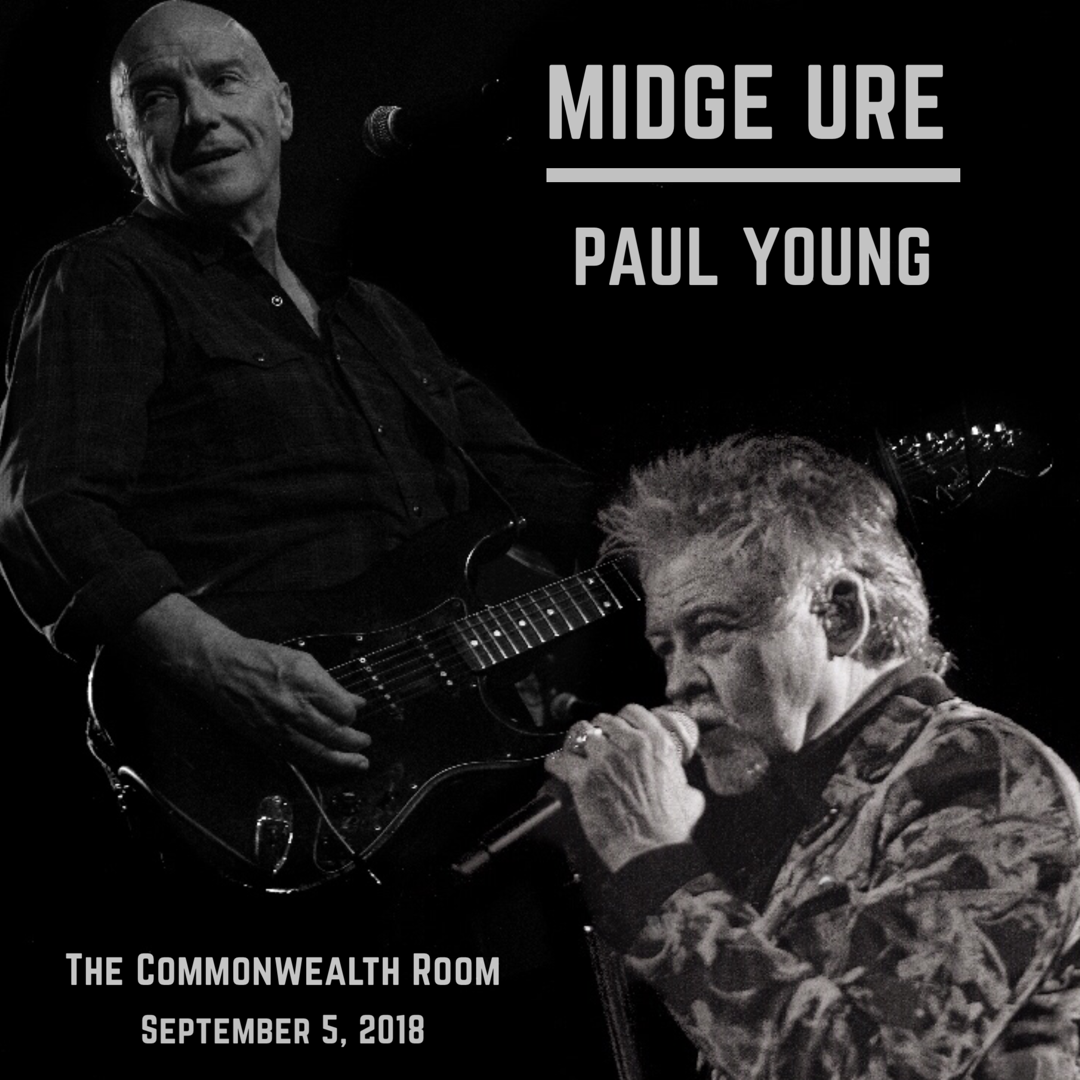 I have been wanting to see a show at The Commonwealth Room ever since it opened in May of this year.  When I saw that Midge Ure was going to be playing there I was excited to know that I’d be seeing one of my favorite artists play this new venue.  Of course, I thought I would have attended at least a couple shows at The Commonwealth Room by the time Midge arrived, but for one reason or another, Midge’s “Soundtrack of Your Life” tour with Paul Young would be my first venture in the venue brought to us by the folks from The State Room.

I was totally impressed with The Commonwealth Room.  It’s laid out similarly to The State Room in downtown Salt Lake City, but I’d say it’s more long, where The State Room is wide.  The sound in there is great, and there isn’t a bad view of the stage in the house. When the show was over we were kind of rushed to leave by security.  That was a little disappointing because my understanding is Midge usually comes out to the merch table after the show. I felt like that was what most the people still hanging out were waiting for.  But they were friendly in their escorting us out of the venue. So that’s nice. It would have been nice to have met Midge after the show though.

When I spoke with Midge a week ago, he mentioned that the flip of a coin would determine whether he or Paul would go on first.  The coin landed on Midge and he opened the night. There was no opening act so he went on right after 8 o’clock. I must admit, Midge was who I was there to see, so I was hoping he would get to close the show.  Nevertheless, there he was on stage first. The benefit of that coin flip was I wouldn’t have to wait to see him. Once he was out there, I was worried about who was on first or last, I was just excited to be seeing him again.

Midge opened with one of my favorite Ultravox songs “Passing Strangers”.  It was immediately obvious that this wasn’t only a favorite of mine, but a favorite of the entire audience.  The truth is, this was a very pro Midge Ure crowd. It almost didn’t matter what he said or played, the audience was behind him.  He even jokingly chastised a fan who was on their phone in the front row. He asked “Are you checking your Facebook? Is it that boring?”.  He said it all with a smile on his face, and the audience laughed and cheered. He mentioned, “They don’t realize that it illuminates their face like the sun.”.  I think it really did annoy him, but he pulled it off in a humorous way so that it didn’t create an awkward moment and ruin the positive energy of the show. But here’s a tip folks, maybe if you’re in the front row of a concert, don’t check your social media accounts.  Artists don’t seem to mind having their pictures taken, or even being videoed. But it has to be difficult not to take it personally when someone is looking at their email, or Instagram when they’re working their hardest to entertain you on stage. So please keep that in mind. 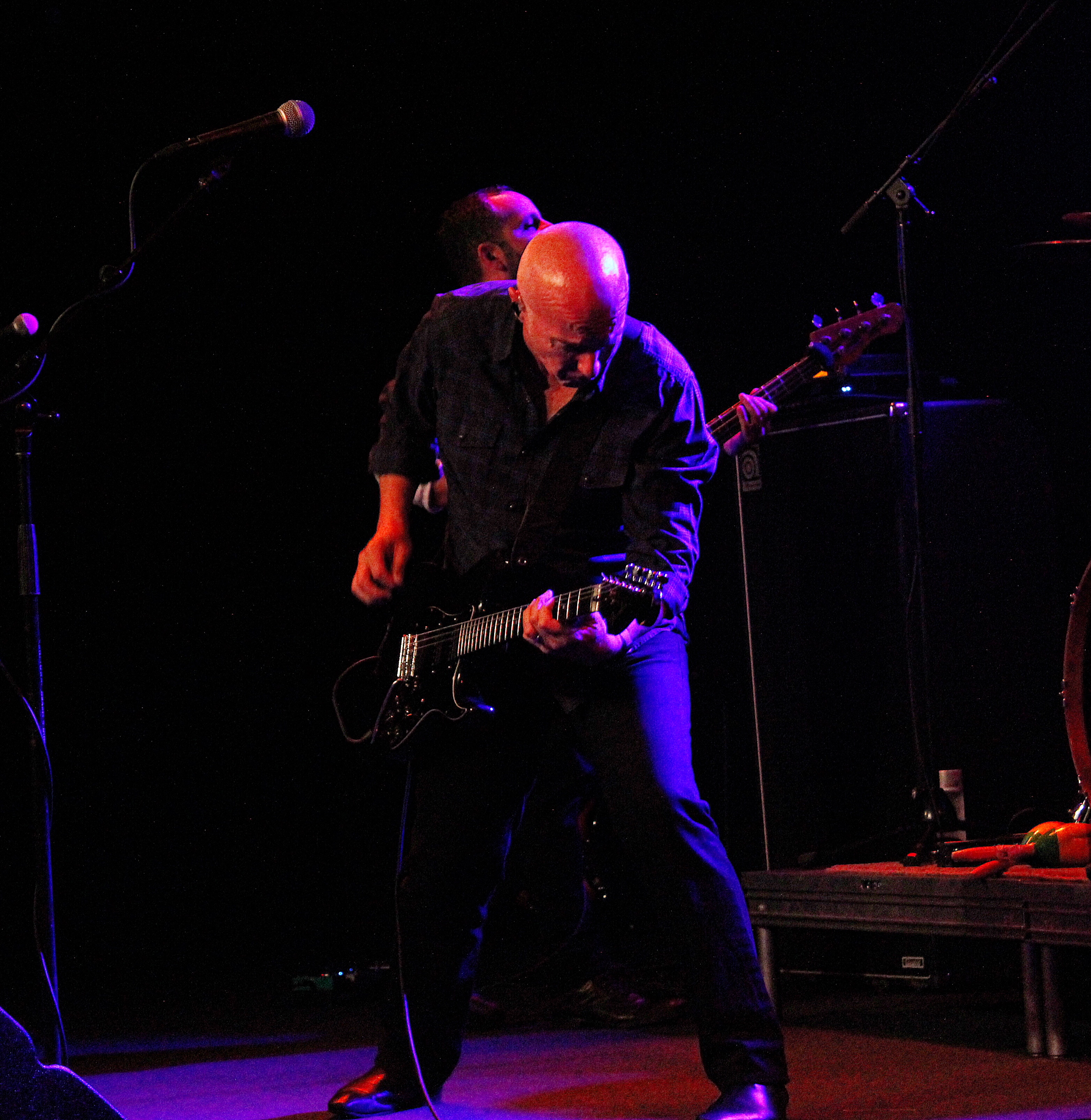 Ure played a condensed set due to the double headlining nature of this tour.  I thought he did a great job mixing in his solo hits like “Dear God” and “If I Was”, with Visage hits like “Fade to Grey”.  Of course, the majority of his hour on stage was spent performing Ultravox classics like “Hymn”, “All Stood Still”, and the audience favorite “Vienna”. The crowd sang along and applauded each one of these songs.  These singles were never huge hits in America. So I think those in attendance delighted in the opportunity to hear these songs live. It took them back to a time when they really had to mine these gems from record shops and college radio.  Midge sounded fantastic and he was a pleasure to hear.

Midge also mentioned how talented the musicians he had hired to play for him and Paul Young on this tour.  They come from the Berklee School of Music in Massachusetts. And he was absolutely right, they were fantastic.  Not only with Midge, but with Paul as well. The three-piece consisted of bass, drums, and keyboards. The songs they were playing were most certainly older than them, but they played them with the proper styling and purpose that you’d hope to hear from a band playing music from a specific era of music.  I was really impressed with each one of them.

Midge’s set seemed so short.  It ran for eleven songs and for only one hour which felt like twenty minutes.  When he walked off stage, I looked around and many of the people around me stated the same sentiment to their friends.  “That’s it?” The song suspiciously missing from his set was “Dancing With Tears In My Eyes”. I think this left fans disappointed. I’ve noticed on other setlists on this tour the song was performed.  Curious why he didn’t play it. But I think fans being disappointed is sort of a compliment. “Leave them wanting more!” they say. And the crowd most certainly wanted more Midge Ure. 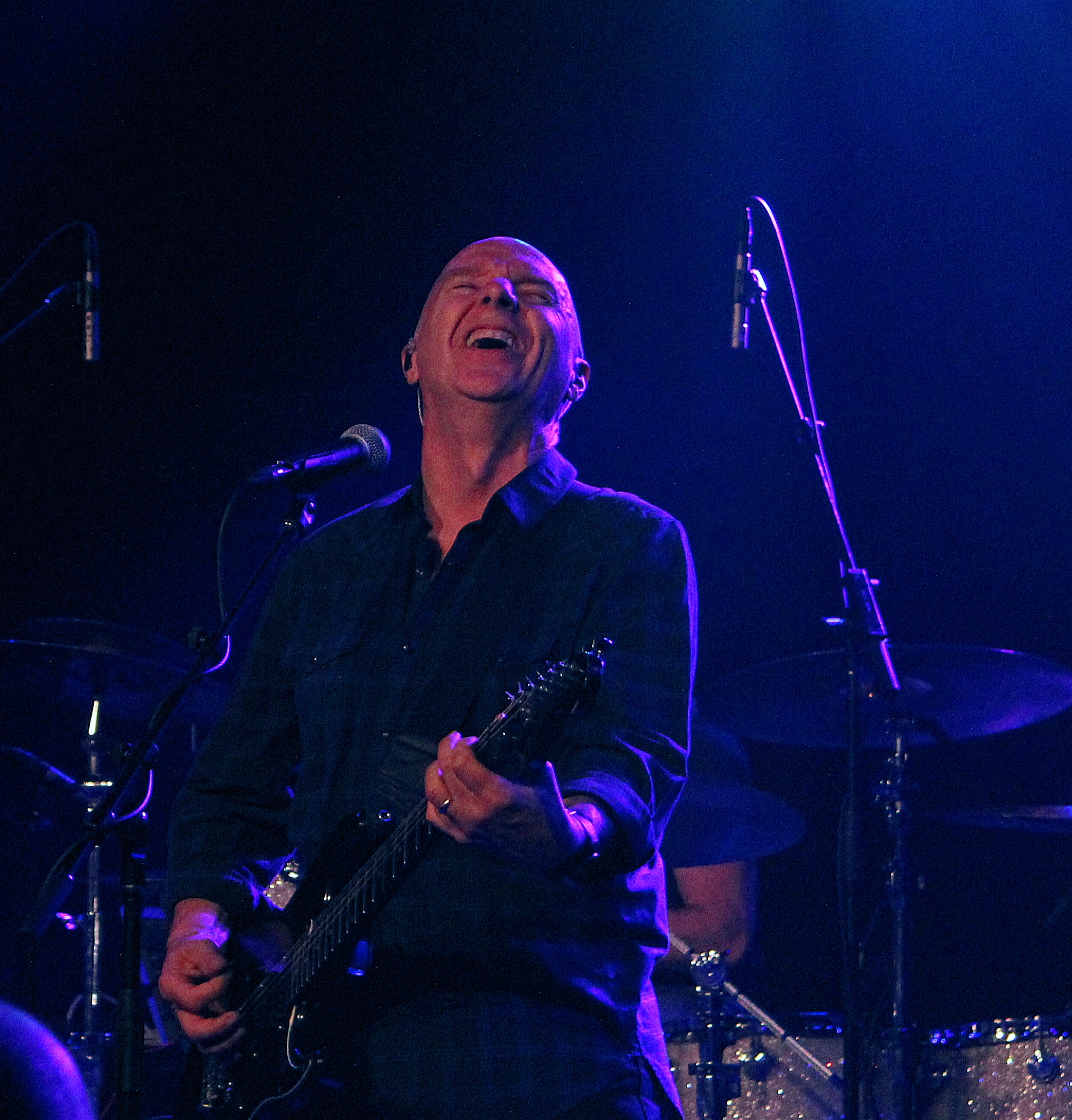 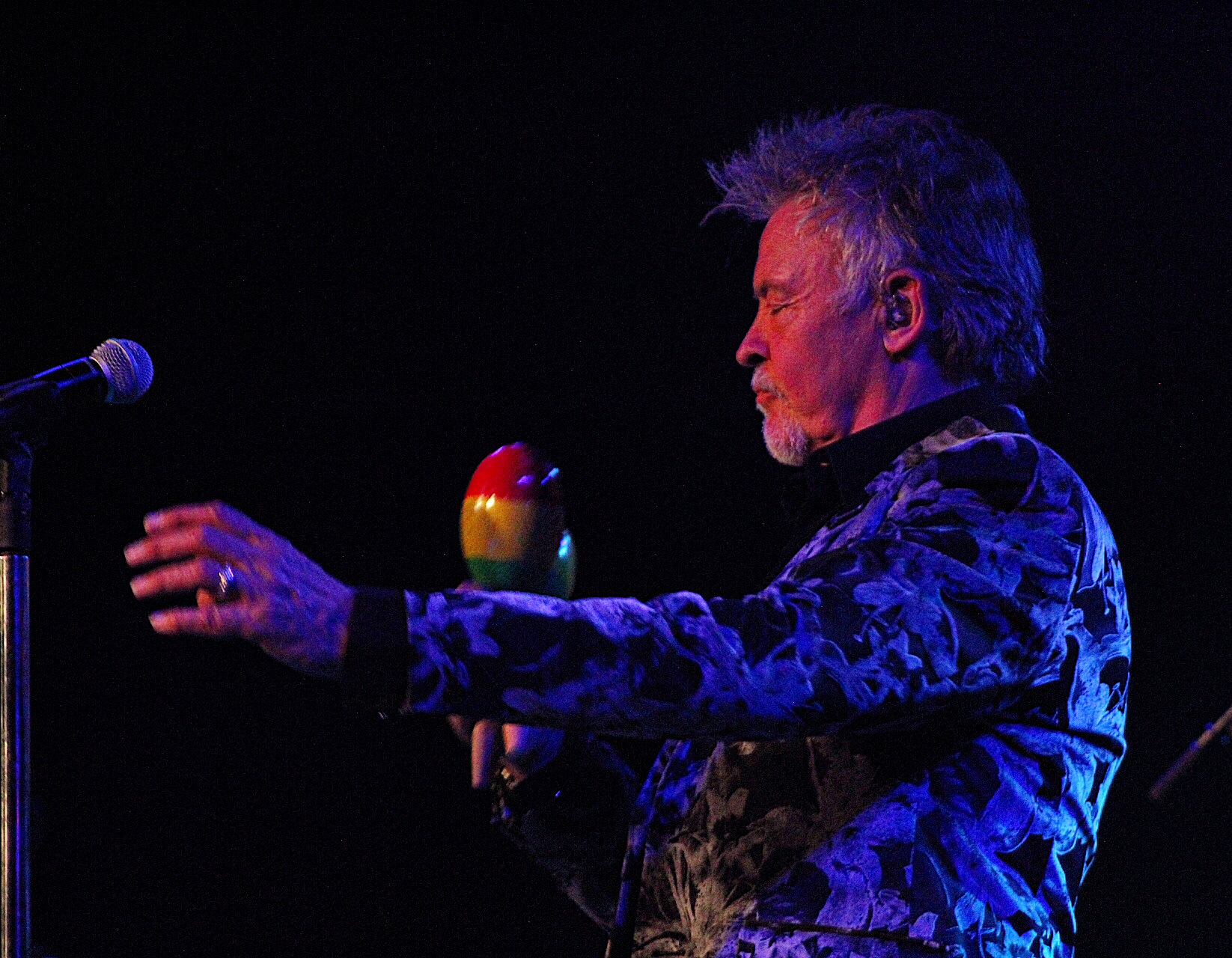 Paul walked on to the stage with the same backing band as Midge, but he brought with him his lead guitarist, Jamie Moses.  The song “Some People” began. The crowd clapped along to the beat, and then cheered when Paul made his appearance onto the stage. I thought Paul looked great.  He seemed happy to be in a great mood, joking with the audience and at times I noticed him joking around with the band mid-song.

I thought there were times where Paul sounded great.  His voice has aged but he generally knows just the right area in a song to place his voice so that it still sounds good.  I always respect the professionalism of an artist that can adjust their voice to a song when they can no longer sing it like they did when they were younger.  Singers like Bono or even Midge come to mind. They find a new way to interpret a song so that it has the same impact, we’re just taken there in a different way.  So it was with Paul. The soulful raspiness of his voice brought the house down many times. 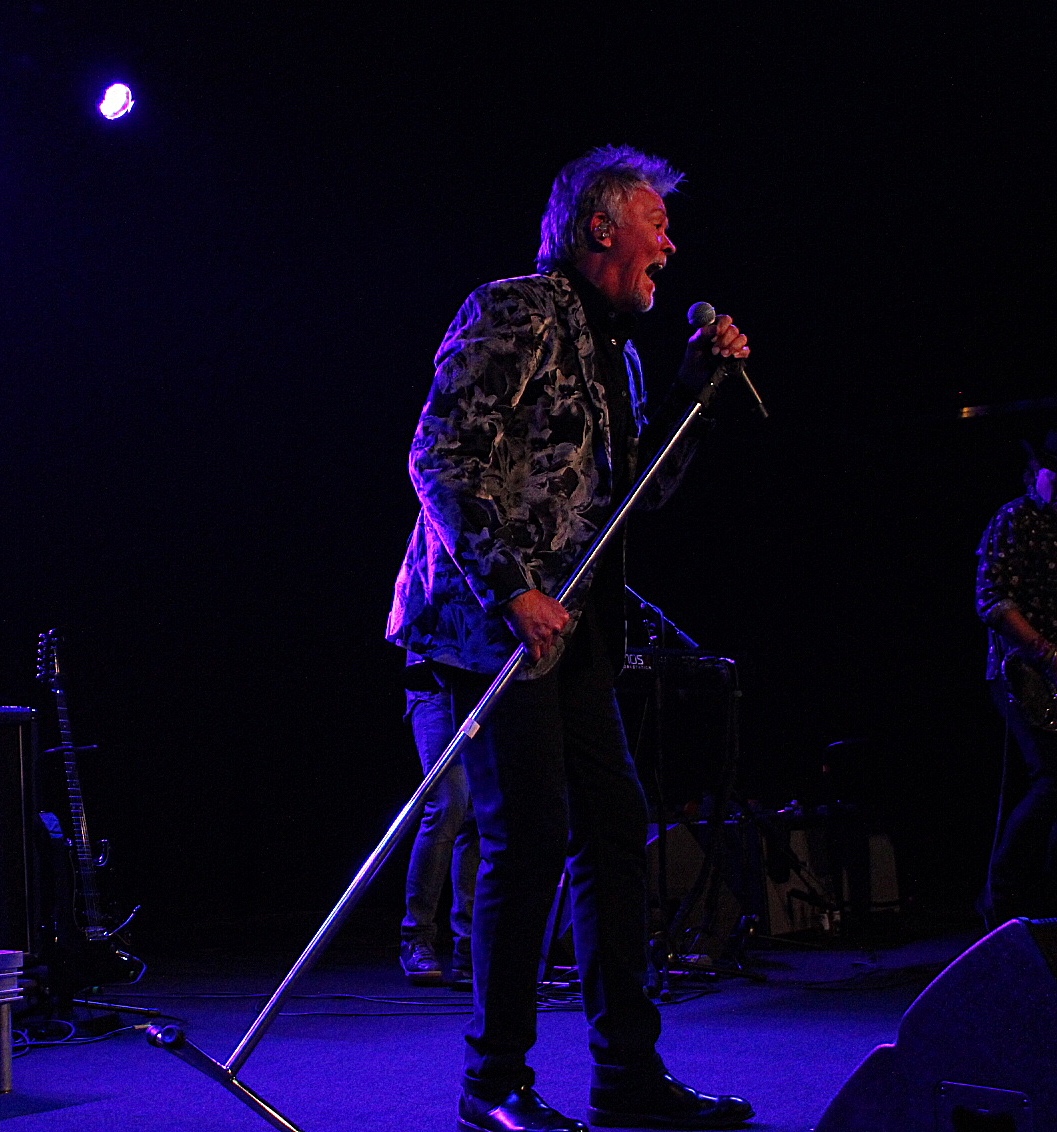 I thoroughly enjoyed guitarist Jamie Moses.  For one, he’s extremely talented. His playing gave Paul’s set a real soulful and bluesy feel.  The way Jamie and Paul engaged with each other was fun.  Jaime really added to the music and blended perfectly with the three other guys in the band.  It was a great move for Paul to bring him on tour. 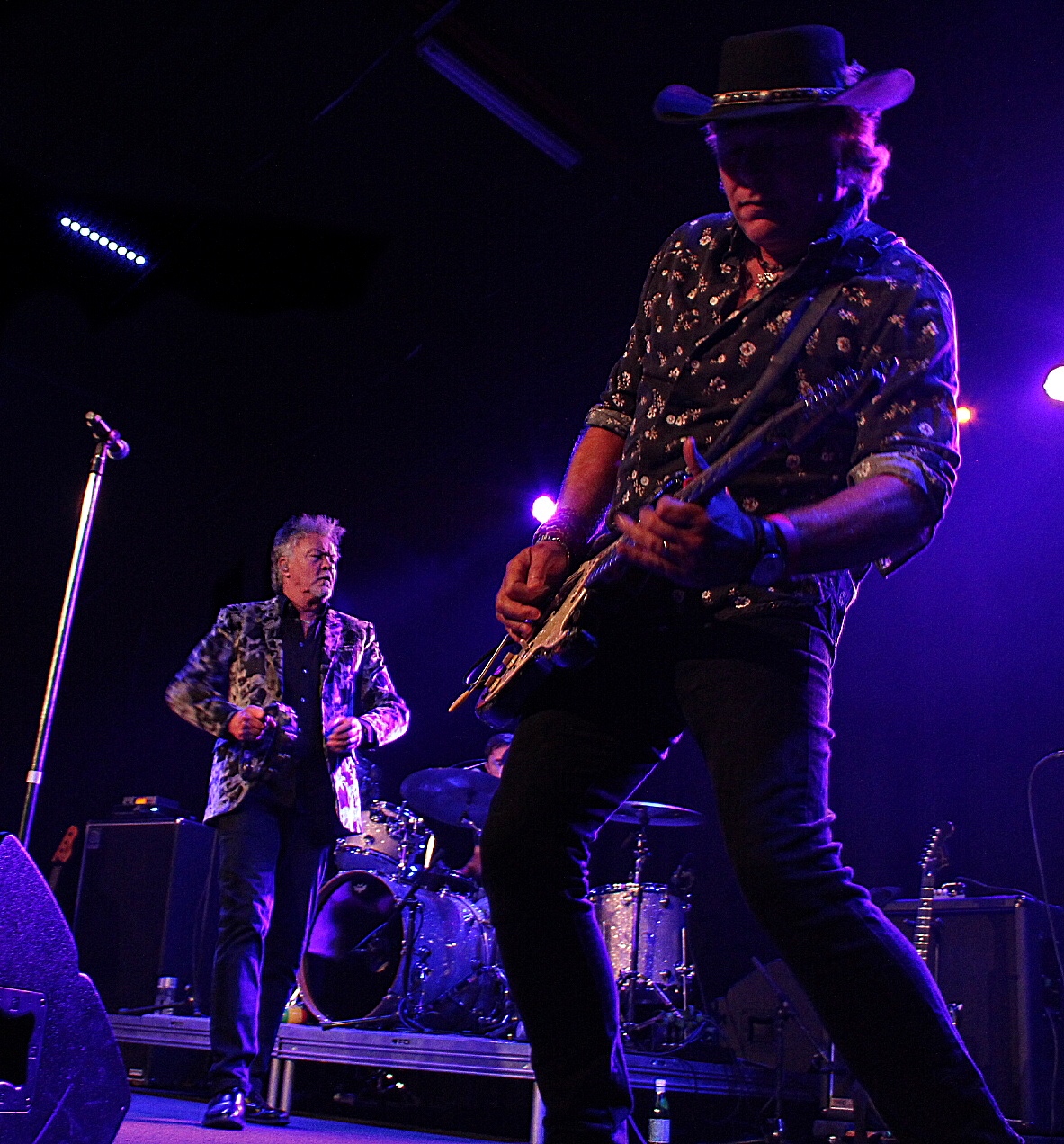 I would say the only unfortunate thing was that after Midge’s set, a good number of people left.  So I’d say the audience for Paul was only about half of what it was for the beginning of the night.  That didn’t seem to bother Young because he still sang his heart out, and danced as if the place was at capacity.  Another admirable quality of a true professional. And those who stayed were delivered a good time.

Paul Young spanned his career catalog to the enjoyment of the crowd.  Songs like “Love of the Common People” which was featured on the Sixteen Candles soundtrack, and “Get ‘em Up, Joe” were well liked.  He received especially strong ovations when he sang “What Becomes of the Broken Hearted” and of course, his biggest hit,  “Everytime You Go Away”.  On the latter song, the audience sang along, and as I looked around people were signing it to each other with smiles on our faces. 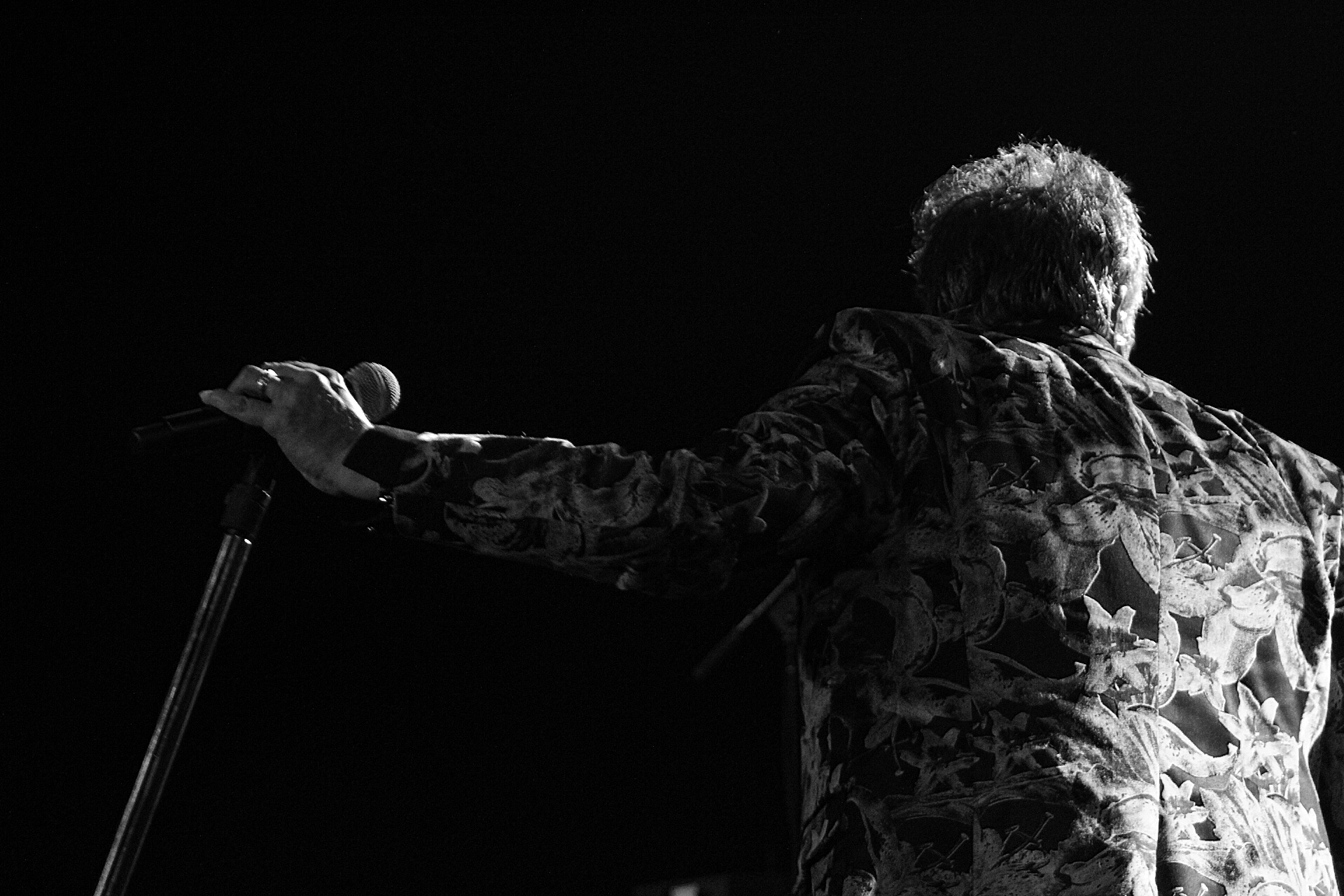 Those that stuck around for the entire night were treated to an encore that included both Paul Young and Midge Ure on the stage together.  They covered the Thin Lizzy song “Boys are Back in Town”. Which was particularly exciting because Midge actually spent time as a member of Thin Lizzy in the late 70’s and early 80’s.  It was the most rocking song of the night so it seemed to give the band and Jamie a chance to really go for it. It was fun. Jamie and Midge would go back and forth with guitar riffs. I think this was a real pleasant surprise to the audience and they loved it.

This was a really fun night and a ride back to the 80’s.  I think the general sentiment from the attendees was “More Midge”.  It was who they were there to see. I think they were surprised how much they enjoyed Paul Young, but at least for Utah, I think they would have preferred Paul open, and Midge give them a full set.

I did enjoy Paul Young. He hadn’t played Utah in over twenty years so it was great to have him back.   They seemed to enjoy touring together. And the fact that they played together in the encore was a solid indicator of that. You don’t always see that with bands. Many times an artist or band that has already played will head out on the road or go back to the hotel when they’re done.  So it was cool to see these guys actually perform together.  I do want a full set from Midge, but tonight was not that show.  I still enjoyed it very much. I guess he’ll just have to come see us again soon.