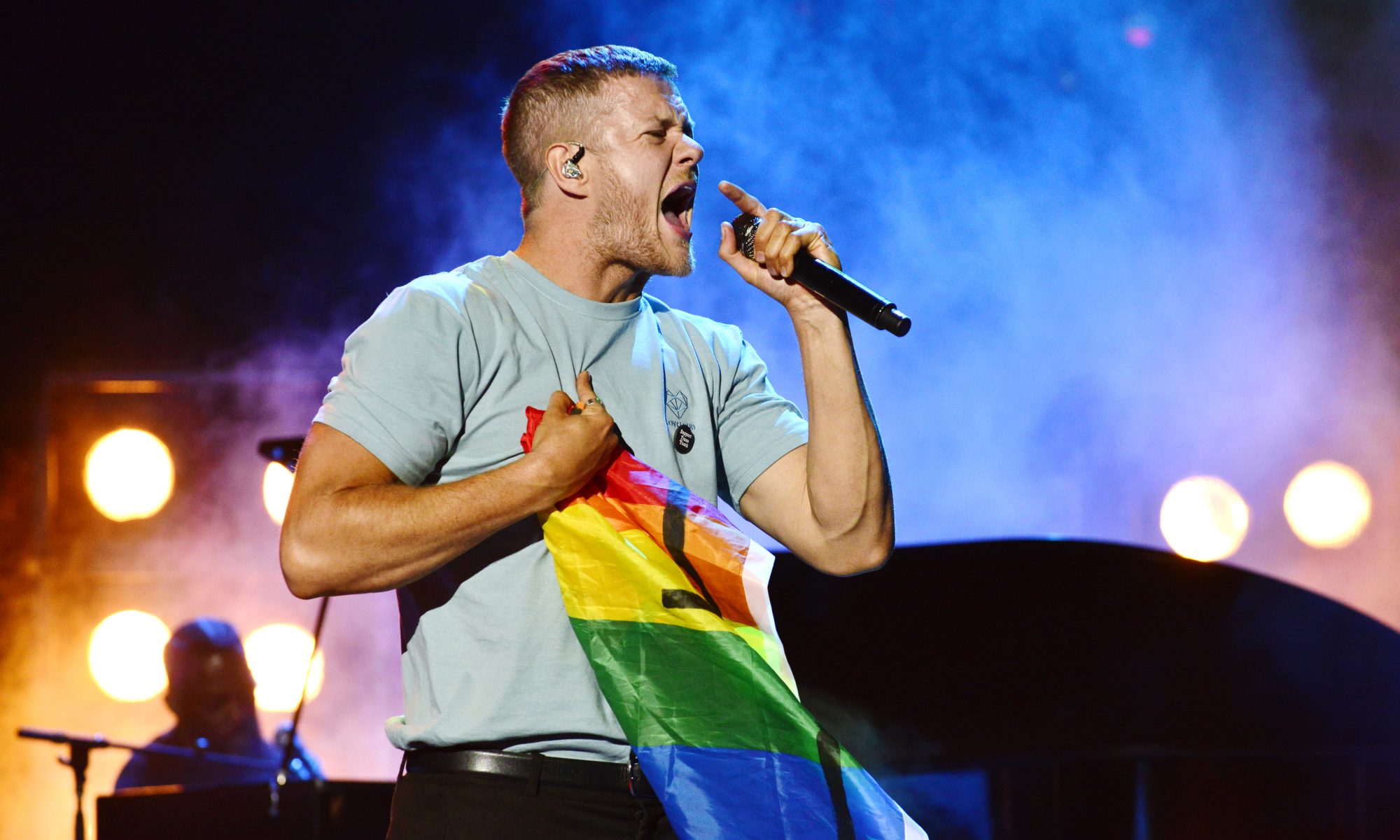 I arrived a bit after 5:30. So, unfortunately, I missed a few performers leading up to Tegan and Sara. Seeing as I’m a member of the LGBTQ community and was raised in a conservative culture I was unprepared for how triggering this festival was for me.

The sound quality at USANA Amphitheater was decent for the performances but absolutely horrific for the host, Kalen Allen. He handled the major glitches with sparkling grace  (literally, he was wearing this silver sequin jumpsuit).

I have been lucky enough to have seen Tegan and Sara live before. I love them and in my eyes, they can do no wrong. I’m bummed that I was behind schedule and missed the first part of their set. They finished their bit with “Closer” (a fantastic indie pop ballad full of soon to be realized sexual tension) and it was maybe a little thrilling hearing so many voices sing the words. Tegan and Sara are HUGE in the queer community and very popular as a mainstream band. Maneuvering through the crowd, singing along with nearly every person I walked by. Music creates a bond and it was something I had been looking forward to meeting with this concert.

This was my first time at LOVELOUD and I was unprepared for the size of this thing. I also experience a bit of social anxiety and crowds do make me nervous. So, after Tegan and Sara and the next artist I made notes about, it’s all kind of a blur.

In that blur, however, I did see Lena Waithe  AND THAT was so exciting. I was maybe 5 feet away and I absolutely-mouth open, all of the sudden high pitched voice-fangirled. Sorry,  Kevin! It was my first time near a celebrity and I had no preparation being near someone famous, let alone someone so attractive that you also follow on Instagram. I’m just a girl!

I knew nothing of AJR beforehand and think they should tour with Jon Bellion. Big, energetic movements and very interesting hat choice. The lead singer was pretty much doing dance aerobics while singing his pounding heart out and I’m curious how many calories he burned on stage. I really appreciated his enthusiasm and his quirky persona. They possessed a passion that was easy to recognize and easy to listen to even though I had only heard one of their songs before.

A few different speakers and performances later, Ty Herndon made the secondary stage. His story was engaging and it touched my heart when he said: “I wish I could have sung the song this way 25 years ago.” Tears were in his eyes while he sang the pronouns “He.”  I was taken back by his vulnerability and he was a highlight of the evening for me. He represented what I had hoped to see more of that evening; Queer artists being queer and artists.

Encircle, an incredible, local nonprofit supporting LGBTQ+ youth created the inspiring motto, “no sides, only love.” This mostly refers to the schism between the religious community and queer community, especially in Utah and with the LDS faith.

This statement gives me hope for future generations, that total acceptance is possible. That these kids know they deserve it. It’s something teenager me couldn’t understand. It’s a relatively new concept for a lot of folks and it’s still something a lot of people struggle with. There has been a lot of damage done for queer folk within conservative religions. I would be amiss to avoid the discrepancies between the invitations to choose love and the official statement of the LDS church and its leaders.

So, when the headliner of LOVELOUD stepped on stage, she was a breath of fresh air. I listened to Kesha’s bops of the mid-2000s and was rather neutral about her, until Kesha v. Dr.Luke and her subsequent album. Even still, Kesha has always represented individuality but it wasn’t until her latest album that I heard more depth and empowerment in her music. She is positive and unapologetic. Making a song like “Tik Tok” personal and intimate by saying “This song has always been for you!” She connected the meaning of the song to both communities by belting out with the thousands present, “We are who we are!” She reflected my earlier expectations for the festival. Someone who was bringing this dynamic group of people together with a message that transcended her lyrics. Personally, I think she should have closed the show.

When there is such a group of people, coming together over such a controversial issue, there really is no winning. Some folks left during Kesha’s set because of their personal discomfort. She dropped a few F-bombs, right off the bat. Some folks left for things being too ‘churchy.’ It was disappointing to see the sentiment “no sides, only love” fall flat frequently that night.

Kesha reinforced the space to celebrate individuality and acceptance. Her badass self could not be restrained by those ass-less chaps. Her vocal strength and her stage presence really surprised me. She was hitting the notes (she did forget the lyrics to one of her songs, but I don’t know the lyrics either so, no biggie honey) and she managed choreography, bra twirling and wearing the most amazing costumes. (My personal favorite was her closing number; the one-legged, heavily fringed, red sequined jumpsuit. *makes the Italian mwah sound with fingers/lips*

The festival caters to two different communities, any artist from either community would celebrate one of the groups and potentially offend the other. Similar to the two separate stages, these mixed messages from the different artists almost symbolized this disconnect.

Which brings me to the second headliner, Dan Reynolds. Whose heart is in the right place and is a great role model of an ally. He reminded me that there is still so much misunderstanding between these communities. I do appreciate the effort of his words. I appreciate the good he has done and continues to do, but ultimately, pass the mic to the queer voices. And I’m not suggesting another duet, performing a revitalized rendition of the LDS children’s song,  “I’ll Walk with You.”

I recognize the value of an environment for so many different people to come together. I do think it is incredible that people from these two distinct communities learn how to love, however that looks.

We can see how far we’ve come as well as recognize how far we still need to go. To love, understand, support and celebrate all people on Sundays as well as Saturdays.