It was time once again to head to the USANA Amphitheater to spend another beautiful July night in double headlining, legendary rock band euphoria. USANA was packed as much as I’ve ever seen it. So packed, I didn’t see a patch of green in the lawn seating. Tonight’s leaders of fist pumps and rock fingers were first The Steve Miller Band, and bringing it home was one of the all time greatest hit machines, Journey.

Tower of Power opened the show, but I missed them. But all accounts were that they sounded as good as ever.

To be honest, I was surprised that this was a double headliner. Yes, Steve Miller Band has tons of great songs, and a fan base that has lasted and rivals many if not most of it’s contemporaries. But when I think of Journey, I think of hit after hit, and sing a long after sing a long. Not to mention the fact that “Don’t Stop Believin’” is the most downloaded song of all time. That, as well as appearing in the finale of “The Soprano’s”, gave Journey a new life in the new century. But finding their current lead singer, Arnel Pineda, on YouTube, and the story that goes along with that, has kept Journey far above any other band in their era. https://www.youtube.com/watch?v=yKv93LcfLOI 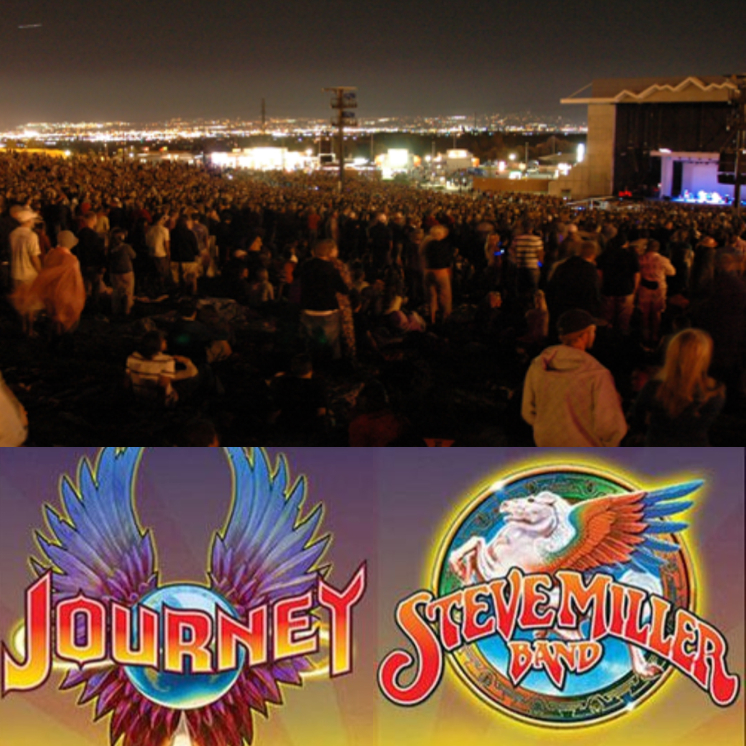 But tonight, we were back in a time where Journey, and The Steve Miller Band were playing the Fillmore in San Francisco and both were each other’s equal.

Initially The SMB was treated as if it was the opening act. The sun was still out, people were sitting down for the most part. Steve didn’t seem to mind. I really enjoy The SMB. They are one of those bands that have way more hits than you realize. They opened the show with about 4 huge hits. The crowd seemed pleased to hear these classics. I was concerned thinking, ‘He’s playing all his hits early, he’s going to run out of songs!’. But as I mentioned, he has way more classic stadium anthems than I realized. After the obligatory slow jam portion of the show. When that was finished, Steve and his band kicked it into high gear and finished the show with even more huge classic hit songs. I would say out of the 18 song set, I knew at least 12. I’m a greatest hits fan of The SMB. I’ll admit it. So to know more songs than I thought I would, was a pleasant surprise. The crowd finally rose to their feet when Steve Miller put on his spaceman mask and sang “Space Cowboy”. It was the highlight of the set for me. And because they were co-headlining they came out and did an encore. As the sun was going down, the energy was up for The SMB. They ended the show strong, and the crowd was ready for Journey.

About 20 minutes later, Journey took to the stage. They hit the crowd with about 5 huge hit songs. It was almost as if the crowd didn’t know what to make of hearing these songs so soon. Songs like “Anyway you want it”, or “Separate Ways”, or “Only the Young” were blasting through our ears and into our brains before we knew what to make of it. They were in top form.

One of Journey’s shows earlier in the week had to be canceled due to inclimate weather. This gave Arnel an extra night of vocal rest. Honestly, I don’t know how that dude sings those songs 3-4 times a week. He was in his usual top form, running all over the stage looking like he was twenty years younger than the rest of the band. He’s only about 10 years younger.

Spirits were high, and voices were united in these familiar songs for a solid forty minutes. Then the middle of the show arrived. Now don’t get me wrong, I get bands wanting to do newer songs. Especially when they’ve been playing the same stuff for 30 plus years. But something felt weird about this middle segment of the show. They would play a new song, or a deep cut, and then attempt to keep the crowd interested with a piano medley of songs that were otherwise unplayed. Instead of being interesting, it mostly bummed me out that I wouldn’t be hearing some of these great songs of theirs. They got the crowd’s attention by getting back into their classic catalog and mixing in “Lights” and “Open Arms”. The crowd joined in these sing alongs as it’s some of their biggest songs, but the audience had been figuratively sitting on their hands for the better part of a half hour when we finally reached this point. The band then jumped back into some newer jams, and the crowd for the most part was not along for the ride.

Brandon Flowers, the lead singer from one of my favorite bands The Killers, when asked why he was doing a solo album when the rest of the band was taking a break, said something to effect of, most bands have a ten year window, give or take, where fans are interested in hearing new music from them. After that, they only want to hear “the hits”. So he wanted to release as much music in that time as he could before he was relegated to a “hits only” act. Even if sometimes the newer stuff is great or even better than what made the band big, the general fans don’t want that. After reading that interview, I have always paid attention to this philosophy. And you know what, he’s right. And so it goes with Journey. When they had their decade or so, they released hit song after hit song. A streak matched by very few. So when it came to performing songs not within that framed decade, the crowd was generally uninterested, and seemed eager for a return to the songs they hoped to hear. They actually had some pretty decent new songs. Well, at least songs that sounded like Journey songs. But no one wanted to hear them. And as a fan, I’m right there with the other 20,000. I want to hear the songs I grew up on. The songs that made a comeback when I was in high school, and Journey released their Greatest Hits album, which reminded us that they existed, and that they once dominated the charts. But at the same time, I can see how this could be frustrating for the band to be held to past success without given a chance to show what else they can do.

Finally the crowd was resurrected when Journey played “Wheel in the Sky”. From there they played a few more big songs and then, as if nothing ever happened prior to this moment, they played “Don’t Stop Believin’”. No matter how many hits they have, and no matter how many new songs they tried to squeeze in, when that piano intro hits the ears, it’s like the world stops and all focus is on this one moment. It’s amazing how a four minute song can feel like an eternity of awesomeness. That was the moment, and the reason to be there. They must have played that song thousands of times over their career. But there is just no way it can get old. To see a crowd in that state of frenzy is a feeling I can only imagine, but one that they see every night. It must be so amazing.

The band left and then of course came back for the encore. They finished the show with one of my favorites “Lovin’, Touchin’ Squeezin’”. The crowd was still at it’s peak. It was strange. It was almost as if the show was just getting going, and yet, unfortunately this was to be their last song. I’m not sure if it was the order of their setlist, or too many new jams, but with that middle portion of the show bringing things to what felt like a stand still, the night left a little to be desired.

That being said, it was a fun night of overall great music. The people watching wasn’t a let down by any means either. It really is one of my favorite aspects of attending concerts. It’s hard sometimes to not wonder how much more amazing this night would be, if we could see Steve Perry back in his rightful place as the lead singer of Journey. But I feel like we are dealt this hand as Journey fans, and if we have to see a replacement singer, I’m glad it’s Arnel Pineda. He keeps the show alive, and exciting. Without him, there would be a lot of 50 year olds just standing there. They do sound fantastic, but Arnel makes a Journey show still worth going to.