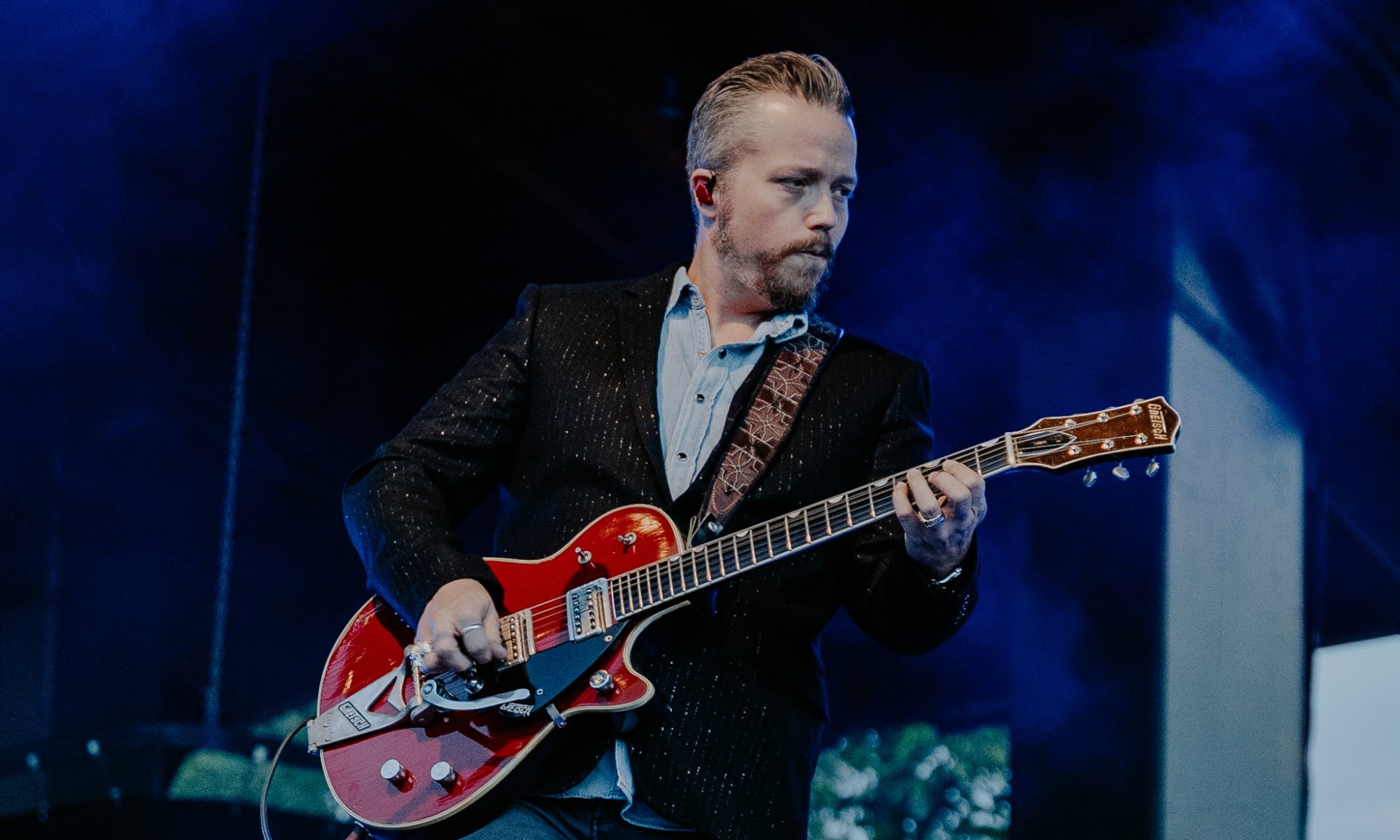 Do you ever hear your friends or peers mention a band or solo artist with such reverence and admiration that you start to wonder, even though you feel like you love music more than anyone ever, “How have I not heard of this person/band”?  That was me some years ago with Jason Isbell. His name would come up in social circles or I’d be at a concert waiting for a band to come on and I’d hear people mention how they’d seen Jason Isbell live and how any fan of live music needs to see him.  When people had asked me, “Have you been to a Jason Isbell concert?” and I’d say that I hadn’t the look of shame and embarrassment for me meant only one thing, I’d better see Jason Isbell live or lose all credibility.

Fortunately, Jason Isbell and the 400 Unit played at Red Butte Garden Amphitheater on September 19.  I was there, and I get it. The songs, the voice, the band, the guitar, just the whole experience was remarkable.  I’m glad I finally saw him, but now I don’t know if I can’t not see him every time he comes to Utah.

The show started early.  7:10 start time to be exact.  There was no opener and what I gathered from talking to various people before the show, the general consensus was that everyone was happy with there being no opener.  “Let’s just get things going with Jason” one patron mentioned. “I usually enjoy openers, but tonight I just want to hear Jason” another stated. I was kind of surprised that everyone just knew that Isbell would be going on so early.  Obviously no opener was listed, but even on those occasions, the headliner will still go on at a headliner time. But very few people arrived late or rushed in when Jason Isbell took the stage. People were generally in their place and ready to go.

I was a little nervous about the weather leading up to the show.  It had rained pretty hard during the day, and while Red Butte Garden is a “Rain or Shine” venue, I don’t think people are dying to spend most of their night in a rainstorm. The lawn of the amphitheater was a bit soggy, but the clouds parted and the evening was beautiful  A little brisk, but nothing a sweatshirt couldn’t handle.

It’s unusual for a headliner to go on this early so the thing that stood out first and foremost was seeing Jason Isbell and the 400 Unit play as the sun was setting.  We usually see that at Red Butte as the opener is finishing up, or the crew is getting the headliner ready. There are certain spots inside the amphitheater where you can see the sun drop behind the western mountains and begin to see the lights blanketing the sprawling valley.  Isbell told the audience he was glad to be back. Mentioning that Red Butte is a beautiful spot to play.

Much to the delight of the audience, Isbell spread songs off of his highly successful album with the 400 Unit, The Nashville Sound throughout the set, including the opening song “Anxiety” crowd favorite “Last of My Kind” and “Tupelo”.  The biggest surprise to the audience was that Jason played what had in the past been his closer “If We Were Vampires” in the middle of the set.  He told the audience that people would tell him that the song was too sad to be the last song. So he decided to listen to them and play it earlier in the show.  I saw my friend Jessica there and she concurred with the fans that shared this opinion with him stating, “Glad he didn’t end with ‘Vampires” like he said he use to. It’s such a touching, lovely and sad romantic song.”

Isbell told the audience “If you play a sad song fast, it makes Bluegrass music” as he and the band broke into “Tour of Duty”.  This was a perfect song to showcase the 400 Unit. As Isbell and the band played that song I just stared and marveled at the talent I was watching.  Every member of the band was so deeply talented in what they were doing. The mix of Bluegrass, Americana, American Roots, Alternative Country, and the Muscle Shoals sound throughout the concert showed just how versatile and skilled everyone was.

So there’s this strange thing that has been happening at Red Butte concerts this summer.  Someone, I have no idea who, will throw hundreds of glow sticks throughout the audience. I’ve asked a few members of the staff and they have no idea who it is.  But I’ve seen it at several shows this summer. I’m not mad at it, nor do I endorse it. I’m mostly just perplexed by it. Who is thinking, “I’m going to bring hundreds of glow sticks and a just the right moment, I’m going to throw them into the crowd.”? For a solid thirty minutes after “Glow Stick Guy” made his appearance, these sticks flew threw the air.  It’s one of the more bizarre things I’ve seen in a concert series. Mainly because it’s not done by the series itself but just some random. Who knows, maybe it will be a Red Butte tradition for summers to come.

A highlight for me and one I did not expect was when Isbell played the song “Maybe It’s Time” The song he penned for Bradley Cooper for the soundtrack of the movie A Star is Born.  I knew Isbell wrote that song, but I guess I didn’t expect him to sing it, and I didn’t think the audience would love it as much as they did.  When he started singing “Maybe it’s time to let the old ways die” the crowd immediately recognized the song and cheered their approval. The thing I loved about it was Jason performed this song in his style and with his sound.  I really liked that movie and loved this song in it, but I have to say that I was really happy to hear this version from the guy who wrote it. When the song was over Isbell said, “That Bradley Cooper is a handsome man”.

The inner conflict I had throughout the entirety of the show was whether I enjoyed Jason Isbell’s voice or guitar playing more.  The verdict is still out folks. But I’ll tell you what, both are pretty phenomenal. His voice took the lead when he performed “Cover Me Up”.  The song starts softly until all of a sudden his vocals boomed with “In days when we raged!”. It’s something to behold when you see someone who totally understands their voice and knows how to write for it.  That can be said for Isbell with all of his songs, but the sentiments and dynamics of “Cover Me Up” show clearly that Isbell knew just how he wanted to perform this song. It was my favorite moment of the evening.

Then, of course, Jason Isbell comes out and plays “Little Wing” by Jimi Hendrix and shows of his guitar playing, bringing that right back into contention with his voice. I didn’t expect this cover but it was a great time for Isbell and the 400 Unit to shine.

Whether it be performing songs from his former band Drive-By Truckers, his solo work or his newer efforts with the 400 Unit, Jason Isbell has cemented his place as one of the best songwriters of the day.  He’s carried the torch for the Muscle Shoals sound and his music lends itself to the live music experience. I can’t believe it took me this long to see him live. I think about all the shows I might have missed.  And yet, I’m glad this chili Salt Lake City night was the time I got to see him.

I promise I won’t shame you if you haven’t seen Jason Isbell live yet.  I’ll just tell you, you need to. He’s an artist who has perfected his craft and it’s not something you see very often.  Jason mentioned as the show was ending that maybe next time he’d play a couple nights in Utah. I hope he does. He would sell out both nights for sure!