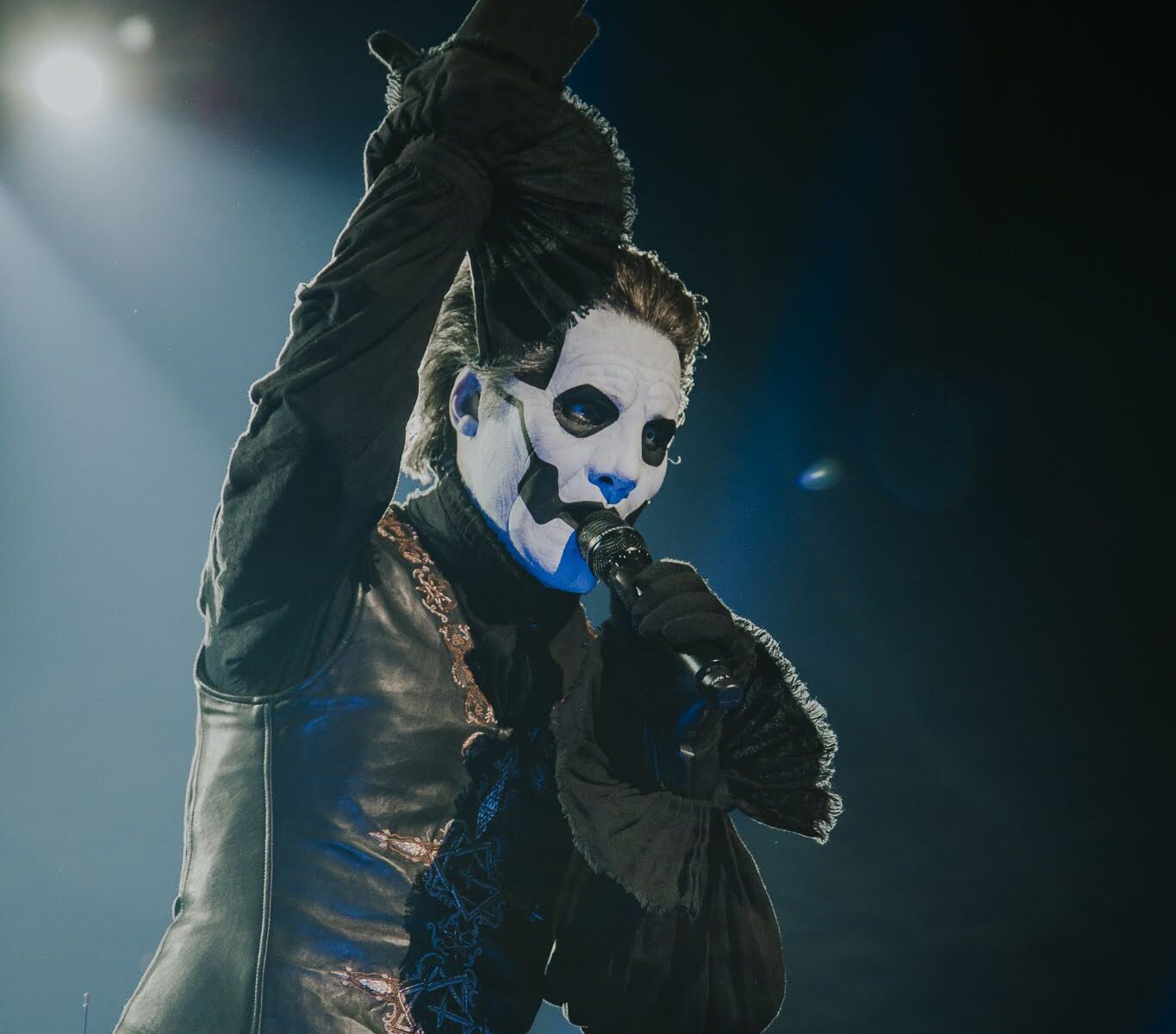 Review and Photos by Vanessa Holt

Utah got the pleasure of getting a stop on the co-headlining tour of Ghost and Volbeat. I’ve attended very few shows at the Maverick Center and I was especially excited for tonight’s show. I had never seen any of the bands on the lineup live before. So it was going to be quite a night for me.

Twin Temple was to start off the night. Going into it, I had no idea what to expect or what their sound was like. I spoke with a few fans in the crowd. They were extremely eager for their set and reassured me that I was definitely in for a treat. The band stepped decked out in all black outfits. They were followed by vocalist, Alexandra James, and guitarist Zachary James in their sequinned capes.

Twin Temple had the entire crowd’s attention from the start. It was hard to look away from their ritualistic intro to their swords, dowsing of holy water, and bells. Their sound was rock with a sense of jazz vibes. That was really brought together by the saxophone and the keyboard. The presence that Alexandra and Zachary had on stage was mesmerizing. Alexandra James looked like an alternative version of Amy Whitehouse. From her hairstyle, her makeup, her entire stage presence, and her vocals. They played a short set and definitely made me wish it was a little longer. Despite that, they left an impression.

We moved quickly to our co-headliners after the Twin Temple set. The best way to describe Volbeat’s set was very energetic and interactive. Volbeat’s stage setup had large digital screens. There was a live feed so that even fans up in the nosebleed seats were able to see everything up close. Throughout their entire set, they had the crowd chanting and headbanging along. It was hard to keep up in the photo pit. There wasn’t a single section on that stage that was left unattended. With the band weaving around each other and getting as close as they could to fans despite being on the raised stage.

On this stop of the tour, Volbeat had to play without their original drummer due to him having COVID. But had a great replacement with Slayer’s drummer. And they were really going to put him to the test with this set. On top of the live screening, they also had visuals up on their screens that varied from ram skulls, flames, and even a little animated visual during, “Wait A Minute My Girl”. They had a very intricate light design set up. I wished I could’ve kept my camera on me all night long to be able to capture it all.

As they neared the end of the set, they expressed their gratitude to the fact that everyone that night had made their way out to support them on this headlining tour because they truly loved what they do. They’re beyond happy they still get to this after all these years. On their second to last song, they wanted fans to have a small reminder that you got to die a little to live a little. They then transitioned to their song, “Die A Little”. It was an hour-long set but it quickly flew by.

Normally as crew members rush to carry off gear and set up the next stage set up, the venue is buzzing as fans talk about the performance the band had put on and how excited they are for the next band on the lineup. However, on that night the buzz only lasted a few minutes as we got closer to Ghost closing out the night. A white curtain raised to block off any view of the stage setup. With an eerie instrumental track playing in the background and the smell of incense, you could feel through the entire venue just how anxious and excited everyone was. From the fans like myself who have never seen Ghost before to the fans who have seen them multiple times and it was feeling like the first time for them all over again.

Once that curtain dropped a cathedral stage design was revealed with the background of their version of stained glass and mini versions of cathedrals. It honestly took me a second to take it all in before I had to knock some sense back into myself and begin snapping photos. Just like Volbeat, it was challenging to keep up. Everywhere you looked from vocalist, Tobias Forge strutting around on stage in the spotlight, to the rest of the band, the nameless Ghouls wandering around the rest of the stage.

They had quite an interesting banter with each other while on stage. As the two Nameless Ghoul guitarists tried to steal the spotlight from Tobias and each other throughout the night. Normally an artist will ask the band to cheer when asking how they’re all doing tonight but Tobias was a little unique in asking the crowd to growl or roar rather than cheer.

Everything about their set impressed me from the stage design to, the light design, and all the outfits. Especially from the tassel vest, minister robe, and the blue sequined suit. All around it was a memorable night and a good first time for me on seeing all the bands for the first time. I couldn’t picture them at any other venue.