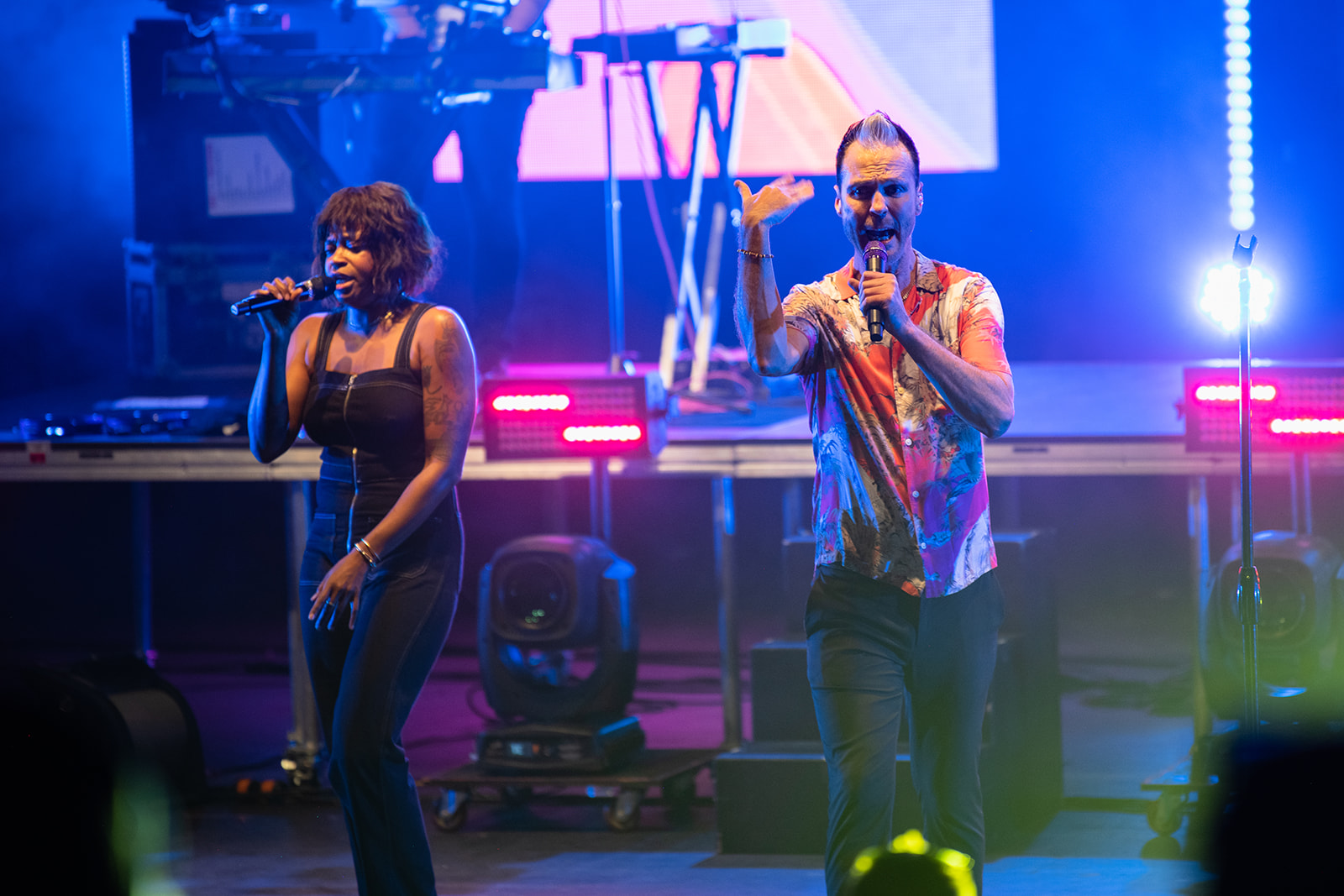 On Thursday, August 18th, Fitz And The Tantrums brought their “Wrong Party” tour to the Sandy Amphitheatre. They brought along with them co-headline Andy Grammer. It has only been six months since Andy Grammer’s last concert in Utah. I also had the opportunity to attend that one. He had released some new music since then, so I was excited to see what would be different. I was not too familiar with the band Fitz And The Tantrums. But by the night’s end, I realized I knew more of their songs than I had expected. The evening was full of the most positive energy and exciting music. Walking around the venue, I noticed far more children than I typically see at concerts. For many of the young music lovers in attendance, this was their very first concert experience. It proved to be a show that will be hard to top.

Pop trio “We Three” opened the night with an incredible performance. The group is made up of siblings Manny, Bethany, and Joshua. They gained popularity in 2018 after making it to the semi-finals in America’s Got Talent. They had more of a headliner energy as they engaged the crowd in their exciting music. The band was new to me, but I could tell that many fans there were well aware of who they were. They were thrilled for the opportunity to see them live. I was impressed with their performance. I expect it won’t be long before they are back in Utah, headlining their own concert.

Andy Grammer was up next to entertain the crowd. The pop artist is known for his uplifting music and family-friendly lyrics. This is partly why he is so well loved in Utah. He walked out to the edge of the stage in front of thousands of cheering fans and began reciting a poem. The poem was about his journey with giving up trying to be someone he isn’t and choosing to accept and love himself. The poem’s last line was also the name of the song he began to sing next, “Damn, it feels good to be me”.

As he jumped around the stage, his positive energy was contagious. One of Andy Grammer’s many talents as a performer is his ability to keep an audience off of their seats. It was clear that he was putting everything he had into his singing and dancing. It was easy to see that his fans were doing the same. The crowd got so into his performance, at times singing along so enthusiastically they nearly drowned him out.

Andy Grammer wanted to make sure his fans all throughout the venue felt his love. He left the stage to walk all the way up to the lawn while singing “Honey I’m Good”. He was surrounded by the fans on the lawn. There wasn’t a dull moment as he worked his way through his 16-song setlist. The setlist included some of his most popular songs like, “Back Home”, “Love Myself”, and “Good To Be Alive”. At the concert I attended six months prior, he sang a cover of “Pennies From Heaven”. I especially enjoyed it and hoped to hear it again. I was pleased when he began singing it, and I loved it just as much as I had before.

Near the end of his set, Andy  Grammer took a moment to explain the name of their tour. The crowd learned that he had collaborated with Fitz and the Tantrums. Together, they are releasing a song called “The Wrong Party”. He then announced that he would be singing the brand new song next, but not without Fitz. Fitz, lead singer of Fitz And The Tantrums, joined him on stage a moment later. They performed their exciting new song together.

Andy Grammer is the kind of guy who carries his positive energy with him wherever he goes. Not just on the stage. He took a moment to talk to the audience about an opportunity he had to visit Primary Children’s Hospital earlier in the day and sing for the children there. I was not surprised in the least to hear that this is how he spent the earlier part of his day. Not only did he take the time to visit the hospital, but he also brought the palliative care team to join him at the concert. During an extraordinary part of the night, he invited them onto the stage with him to sing “Saved My Life”. As incredible and emotional as that performance was, Andy Grammer found a way to top it. During his encore song he sang with a very special guest.

He invited young Payson on stage and said, “I took a trip to the children’s hospital today. This little dude kicked cancer’s ass!” He told the crowd he was so impressed when he sang with Payson earlier, that he invited him to join him tonight.  Together they sang don’t give up on me, and Payson stole the show. It was such a beautiful experience and one that I’m sure everyone in attendance won’t soon forget. After putting 100% into his performance, Andy Grammer and Payson left the stage to a standing ovation.

Fitz and The Tantrums

Concerts with co-headliners always remind me of drive-in movies with double features. As soon as one great show ends, it’s followed up with another great show. The night had already been pretty exciting. But Fitz And The Tantrums were ready to kick it up and bring the energy at the Sandy Amphitheater to the next level. The group consists of lead singer Michael “Fitz” Fitzpatrick (lead vocals), Noelle Scaggs (co-lead vocals and percussion), James King (saxophone, flute, keyboard, percussion, and guitar), Joseph Karnes (bass guitar), Jeremy Ruzumna (keyboards) and John Wicks (drums and percussion). The indie pop band held nothing back as they started their performance with their song “OCD”.

While watching the flirtatious dancing between Fitz and Scaggs, I felt they were having just as much fun as the fans they were performing for. The band spent the evening covered in colorful strobe lights that were as vibrant as their songs. The other incredibly talented musicians accompanied the soulful vocals of Fitz and Scaggs on their various instruments. The night’s performance included a few saxophone solos, always a hit with the crowd.

The Fitz and The Tantrums also had a set of 16 fun songs. Songs including “Complicated,” “123456,” “Moneygrabber,” and “Out Of My League”. The audience loved each piece just as much as the last. They continued to dance and sing along with every catchy chorus. In addition to playing all their old favorites, they introduced the audience to a new song, “Sway”. The playful song was released just a couple of months ago. It will be the first track on their upcoming album set to release in October. If the rest of the songs on the album are as good as “Sway,” I have no doubt it will be a huge success.

They gave their fans another taste of the album a short while later when they played another new song that has yet to be released. “Moneymaker”, not to be confused with their already popular “Moneygrabber”, was an instant hit with the audience.

Noelle Scaggs took a minute to thank everyone for being there before introducing their next song. “I’m standing on this stage right now, looking at all of these beautiful faces here in this crowd, and I just wanted to say thank you so much for showing up here. We have been standing on stages since I was 27 years old, I am now 42, and I am overwhelmed every time we step on stage. This next song right here is really special to me, and this one is dedicated to anyone that has ever felt alone in a room full of strangers, and you didn’t know how to say these three words. This one is called “I Need Help.” Y’all.”

Their song performance was heartfelt, and I noticed many in the crowd getting emotional while singing along. Very few bands could have their fans wiping away tears one moment and back to jumping up and down just a moment later like they did as they began playing “Living for the Weekend”.

By the time the band got to their encore, I was beginning to wonder how much energy was left in the venue. If anyone was starting to slow down, they were quickly reinvigorated as soon as they heard the unforgettable beat of “Handclap”. Just as the song promises, they got everyone in attendance clapping along. The same energy remained as they finished their last songs, “All The Feels” and “Walker”, before waving goodbye to the cheering crowd. The night’s excitement continued even after they had left the stage, and people chatted about how wonderful the night had been. “The Wrong Party” tour was an absolute hit, and every artist involved should be proud of their performance.