I was introduced to David Gray about 12 or so years ago. I used to be involved heavily into concert bootleg trading. I know, I know, I’m an outlaw. Well, there was a particular instance where the person I happened to be trading with was more interested in my collection of live shows than I was in what his. But being a generous trader, I told my fellow trader to pick out what they wanted and I’d find something in their collection to make things even. Gotta keep things even in the bootleg biz! Anyway, after looking through his collection, I chose a David Gray, Live in San Francisco bootleg. I figured, I, like many out there enjoyed his biggest American hit “Babylon”, so why not check out one of his live shows. Well, I don’t remember what else I got out of that trade, but that live bootleg of David Gray is still on my playlist to this day. I am now a huge David Gray fan, and experiencing his live shows in person has been an experience I have always looked forward to throughout the years following that trade. So it was exciting to get to see him again last night at the Red Butte Gardens Amphitheater. 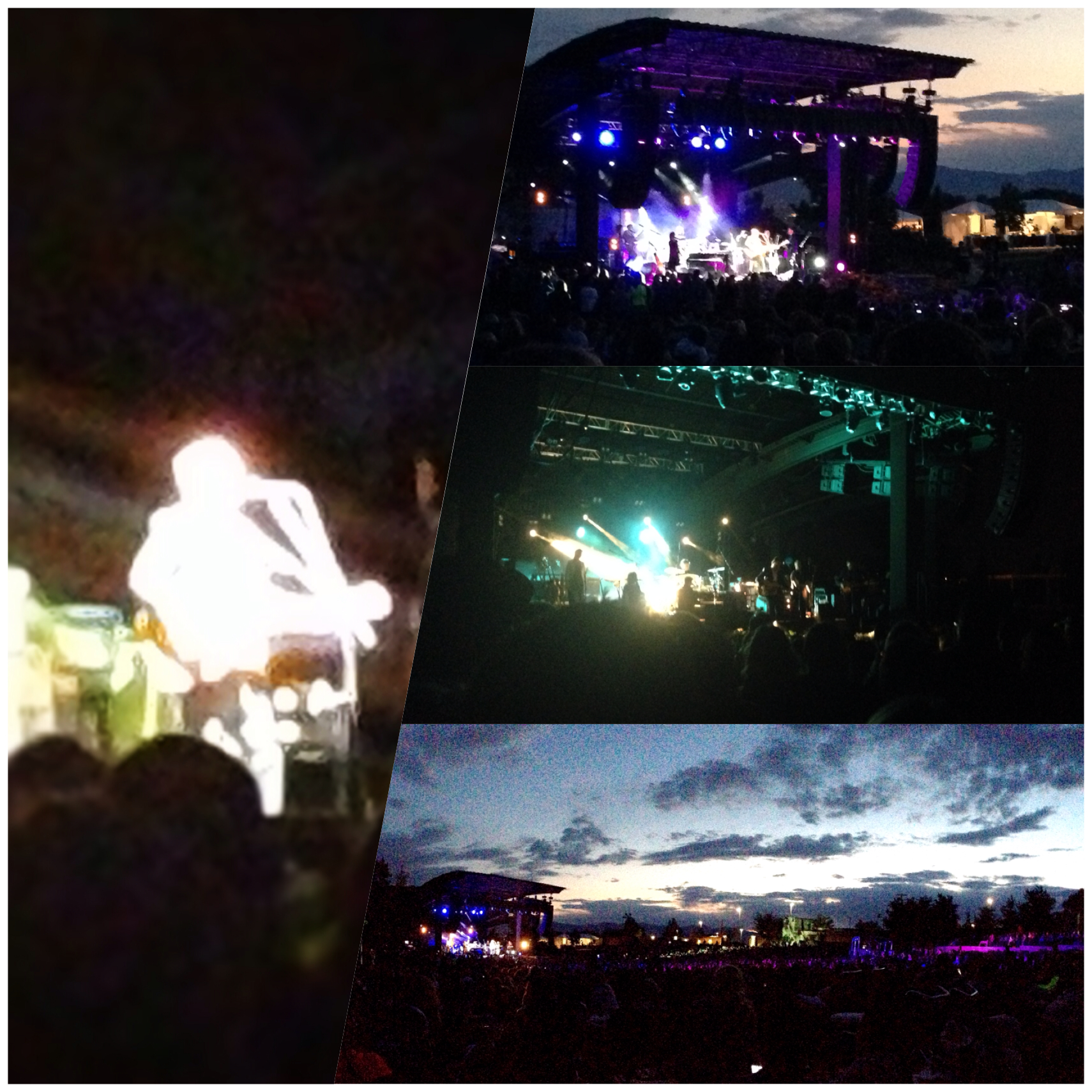 Red Butte has one of Utah’s best backdrops as far as concert venues go. It’s the perfect place to see a concert on a summer night. It always cools down there, and there is a pleasant breeze throughout the venue. This venue is unique though, in a couple ways. One, in that you bring in your own chairs, and blankets to sit on, and you’re allowed to bring in food, and drinks. It’s a really fun social setting. Second, many concert attendees of Red Butte Gardens are season ticket holders. So they’re not always a fan of the artist performing. But they go for the beautiful setting, spend time with their fellow yuppies, and have some fancy cheese and fine wine. The difficult part of this, is once the concert starts, people don’t really seem to understand that social time is over, and that most people came to hear what’s coming out of the person on stage’s mouth, not theirs. People eventually settle down and pay attention to the show, but it’s just not a typical concert event. If anyone has ever been to a David Gray show, they will have seen that the audience is eerily silent, and has a razor sharp focus on David and his songs. So this was a different setting for me to see him in. Dont’ get me wrong, It was an incredible show, and I was happy to be there despite the differences of other DG shows I’ve been to.

David received a standing ovation as we walked out on stage. It was easy to tell who was truly there to see him. Mr. Gray opened the show performing six straight songs from his new album “Mutineers”. This is an unusual course to take for most setlists, but it’s not that unusual for David Gray. He has done this type of thing many times, and I would say normally it’s pretty interesting to listen to his new material grouped together. Unfortunately this may not have been the best approach for this type of setting. With season ticket holders having to sit through a series of songs they didn’t know, just, in their minds, this allowed them to keep the conversation going. But I must say, it was so cool to hear some of these songs live. I think David Gray is thought of as a pretty mellow show to see, because his songs involve a lot of acoustic guitar and piano, but when you see the shows live, you’ll see that the songs are actually pretty high energy. My favorite song on his new album is “Back in the World”. It’s always exciting to hear a crowd accept a new song, and the crowd was very accepting of this song. Many rose to their feet to dance. Another interesting thing about DG shows is the crowd always seems confused as to when to get up, and when to sit. The songs have their own life in a concert setting that I think initially people feel like they’ll be sitting throughout the show, and then they realize it really is a borderline rock show/ jam session. There are those who are determined to stay seated, and those who can’t stay in their seats. It’s something I haven’t ever seen with another artist’s live show.

David breezed through his new set and then really got the crowd going with one of his classics “My Oh My”. From there he perfectly blended songs from his past catalogue with some additional new songs. I think this is the largest band I’ve ever seen DG tour with. It was hard to tell from my vantage point, but I believe he had a 7 piece band backing him. The band consisted of a back up singer (Who harmonized beautifully with DG on “Kathleen”), multiple guitarists, a drummer, and a cellist. But they all seemed to move from one instrument to another depending on what song was being played. Having this type of band allowed DG to add new and fresh orchestrations to his back catalogue. He’s always done a good job of doing this in the past. But this time the songs seemed to have even more layers. If there is one thing I love, it’s when artists add something special to the live versions of their songs. It shows me that they are also interested in keeping things exciting for them. Rather than just playing the song to get through it, they are able to enjoy it as well. And I can always tell the difference. David Gray is a master of keeping his songs, even some he might only play for the fans, feeling new and interesting. Having this size band also gave him the freedom to move about the stage in a way he hasn’t before. There was even a song where he was basically dancing throughout. I enjoyed seeing this new side of him, and while he’s a brilliant piano and guitar player, I’m sure it’s fun for him to interact with the crowd without always having to play an instrument.

The show really picked up with DG performed a crowd favorite “The One I Love”. From there the crowd was completely with him. He ended his main set playing my all time favorite “Please Forgive Me”. The crowd was on it’s feet singing along and the energy was at an all time high. He left the stage and returned for the encore by himself, and played “Babylon” with just him and his acoustic guitar. It was a sing a long never to be forgotten. At the end, as he tends to do, he gave the crowd the opportunity to sing the song themselves. I recorded that part for your viewing pleasure so that those unable to attend can get a sense of just how awesome the moment was. I hope the video can capture it.

He closed the show with “Sail Away”, much to the delight of the crowd. He walked off the stage and the crowd kept going, I thought for a moment he was going to come out for a second encore. But sadly the show was over.

Later that night David posted on his twitter account his set list from the night. But “Nemesis” and “Alibi” both on the set list, went unperformed. I wonder why. Maybe there were time restrictions and he had to cut a couple songs out of the show. I really like both of those songs so I was a little disappointed to have missed hearing them. But it’s impossible to be disappointed at a David Gray show. He puts so much emotion and energy into his music that he draws you into the evening and when it’s over you realize you just witnessed something special. I can’t wait to see him again. 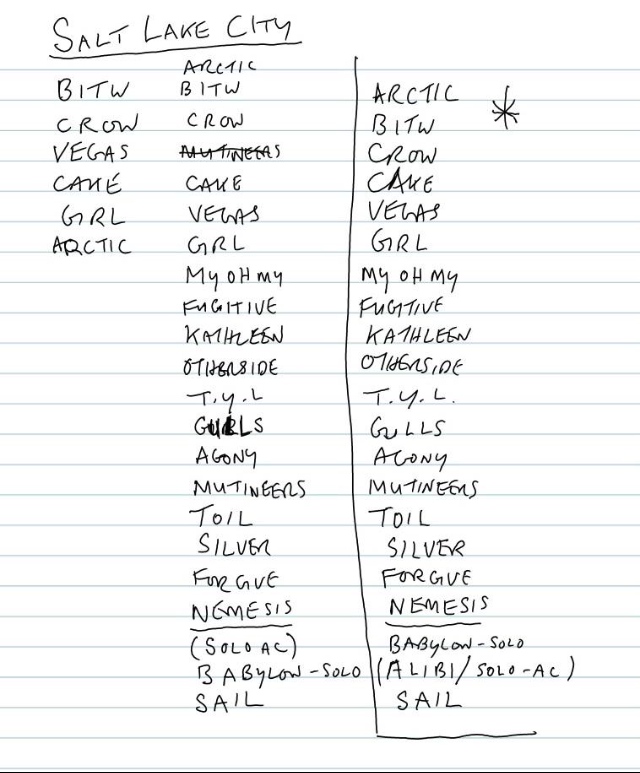