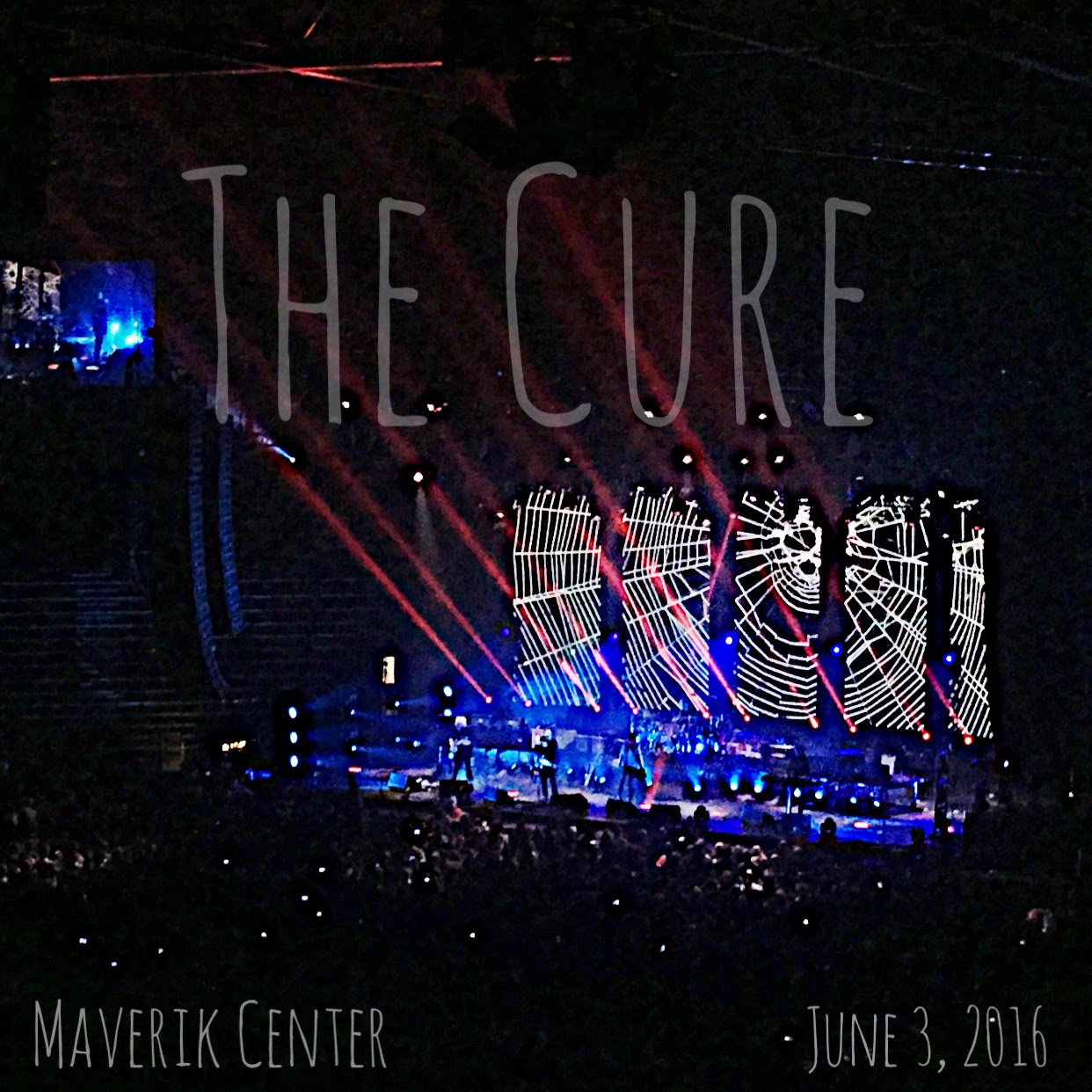 After seeing a string of pop stars (who I did enjoy thoroughly), It was nice to spend an evening getting back in touch with my alternative music roots. On Friday June 3rd, I got to witness The Cure perform an almost three hour, 33 song set at West Valley’s Maverik Center.

I did not have tickets to this show, and I was hoping to find some affordable tickets the day of.  The show had been sold out for months, so I was felt that obtaining tickets might not be in the cards.  Well, fate was on my side, because a friend of mine texted me the night before letting me know that she might have an extra ticket, and confirming that the ticket was mine the following morning.  My excitement was through the roof!

The Cure is known for doing really long sets, so I knew that we should show up on time.  We got to our seats right at 7:30 and as we sat down The Twilight Sad took the stage, opening the show.  They played a respectable 40 minutes, setting the mood for the headliner.

When you’re the king of your genre, and when you’ve been doing it for 30+ years, you’re likely to have fans coming to your shows wanting to hear just your big hits.  This seems to be the case with The Cure.  But The Cure are not really that kind of band.  Robert Smith doesn’t want to come out, do 90 minutes of hits and be on to the next town.  He ensures that the fans get their money’s worth, and that the truest of fans enjoy themselves with songs they wouldn’t expect to hear, but want to.  The set list is rearranged in every city, and the best thing to do is to expect the unexpected.

The show opened with about 30 minutes of songs that a casual fan of The Cure would most likely not recognize.  As I looked around the arena I could see the mega fans so excited to hear these songs, while others were looking at each other shrugging their shoulders, unsure of what these songs were, only certain that they weren’t on a greatest hits album.  But right at the 30 minute mark a huge spiderweb appeared on the screens behind the band.  Both the diehard and the casual fan roared their approval, knowing that the next song was going to be one of their favorites, “Lullaby”.  This seemed to be the real start of the show as far as fan energy was concerned.  The Cure sprinkled in hits with songs from albums across their career.  It seemed they would never go two or three songs without performing a fan favorite.  It seemed as if the energy of the show continued to grow all the way to the end.

The Cure did three encores!  The last two were probably my favorite part of the show.  A lot of great songs, and just a really great environment around the arena.  I found it extremely odd that many fans (I’m guessing very casual fans), left after the first encore.  And more after the second.  Was this their first concert?  Do they not know to watch the lighting of the arena?  That if it stays dark, they’re probably coming back out?  I mean, come on people! I even saw some people racing back to their seats when they realized the show wasn’t over. This would be acceptable if they saw The Cure back in the 80’s.  I remember at my first concert feeling like it depended on me to cheer my loudest so the band would come back.  But this is 2016, and most of the fans looked like they had been to a concert or two in their lives.  They should have known better. Those people missed out on some amazing songs!  They also missed out on some of Robert Smith’s best dance moves. He performed a few songs without his guitar, giving him the freedom to entertain the crowd that much more.  With every subtle move, the crowd would cheer their approval.  The band closed with “Boys Don’t Cry”  And then they were off to Colorado.

The thing that stood out to me was Robert Smith’s voice.  As you can hear in these Youtube clips, he sounds perfect!  To me he sounds the same as he did back in the day.  Very little difference.  I get it that Smith doesn’t have the rangiest voice on earth, but you would think a 57 year old man would have some fall off.  Well, he didn’t.  Every song sounded just like you’d want it to.  I was really happy about this.  It’s sad when our favorite singers start to lose their voices, so I was happy to hear Robert’s voice has stayed intact.  I could not have enjoyed this concert more!
On a personal note, Jamin, one of my best friend’s from high school and beyond was attending the concert with his brother and another high school mate of ours.  As I was walking to my seat, I was about to text him, asking him where his seats were. Just then I looked in my row I found him in the seats right next to mine!  What are the chances?!  I think we brought it up at least four times during the show how crazy it was that with all the seats in the Maverik Center, we happened to be right by each other.  I guess we were just meant to see The Cure together!

Encore 2:
In Between Days
Doing the Unstuck
Friday I’m in Love