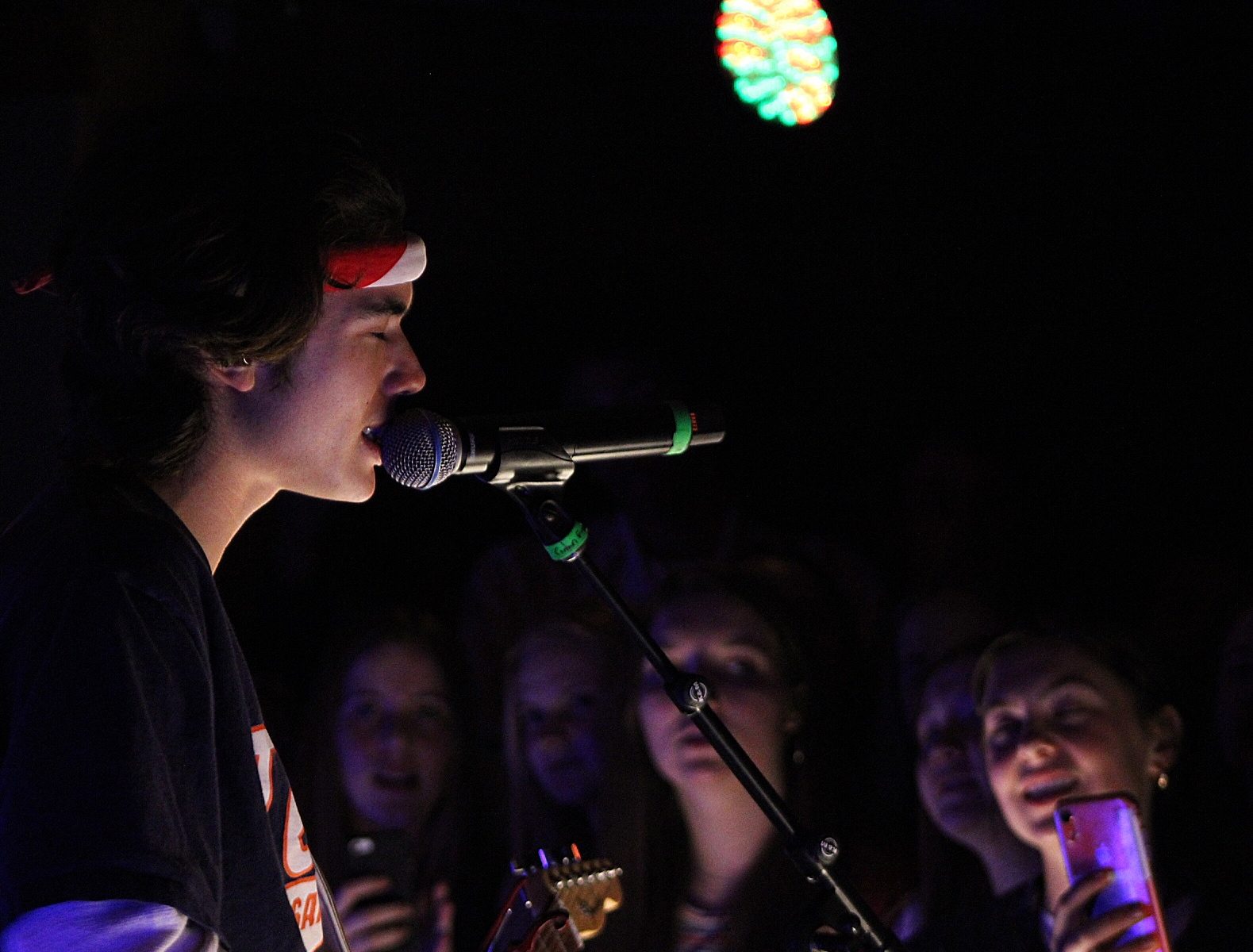 Kilby Court was alive with ardent teenage passion. Being well past my teenage years myself, I relied on their devotion and energy to take me back to that nostalgic time of my youth when I attended some of my first concerts.  It was clear for some in attendance this was their first concert. There is nothing like the excitement of seeing an artist for the first time in person. They wrestled often with the decision of enjoying the moment or capturing as much of it as they could on their phones so they could relive it later.  The cell phones won out as most of the audience took selfies with Conan in the background, recorded video clips of every song and recorded video of their friends dancing to the music. I guess this could an “Old Man Alert”, where I suggest that the teenagers just enjoy the moment and put their phones away.  But if you told me that I could have a video of me and my friends at the first concert I had ever been to, I’d be so happy. So I can’t blame these guys for doing that. The venue was so packed that many opted to stand by the window in the courtyard and look in on the concert rather than sardine themselves inside the room.

I found myself standing in the back with people closer to my age.  Turns out this group was parents of many of the real fans up front.  I have to hand it to these parents, I admire them for being willing to take their kids and their friends to a concert.  I noticed many of the fathers in attendance entertained themselves by either checking scores on their ESPN app or taking video of songs presumably for their kid. Many of the mothers gave it their best shot at embracing the music and the concert by dancing and clapping along inside the room.  Eventually, most of them ended up in the courtyard chatting with one another at the picnic table. This again took me back to my first concert. I was only 15 so I didn’t have my license yet. My mom, with one of her friends, drove me and my friends to the concert. Of course, they had their own seats (better than ours actually!) and we had our seats about ten rows from the top of the L. A. Forum.  The next day I saw another friend who was also at that show. He told me his dad drove his group but sat outside and waited for them. I quickly realized I had the coolest mom in the world. So shout out to the parents who drove their licenseless kids to Conan Gray and didn’t wait outside.

Everything Conan Gray said was met with delight.  Conan asked the audience who was from a small town, and the crowd roared.  I highly doubt the majority of the audience came to Salt Lake City to see Conan Gray from their small town of Morgan, Utah.  Even Conan jokingly questioned the legitimacy of the response. The bottom line is Conan spoke, so the crowd went wild.

Conan Gray mentioned that he had been sick for a good portion of the tour.  I was scheduled to interview Conan a couple of weeks ago and we had to cancel because he was on vocal rest.  While I would have loved to have talked with him, I totally supported that decision because I’d rather his fans in attendance get him at full voice rather than run the risk of an interview with me straining his vocals.  While this was my first time seeing Gray live it was clear that his voice was in good shape. He relied on the audience only a few times for some of the higher or more belted notes. That being said, he sang those notes even when he asked for help.  Conan seemed relieved that this was the last night of the tour. More so that he could just go for it and let loose both with his singing and performing knowing that some R & R would follow this show. I thought he sounded great and he seemed to be in good spirits.

I think the thing I enjoyed the most about this concert was the overall message Conan conveyed.  It seemed like Gray wanted the audience to feel like it was okay to be “weird” an “outcast” or “unpopular”.  This message was not lost on me as I was reminded that Saturday night was many of the local high school’s Prom night.  So there is a chance that those who were at this concert were not at their prom. Hopefully by choice, but very possibly because they weren’t asked or didn’t ask anyone. During the show, someone held up a sign asking Conan to the Prom.  He accepted the offer and told them that “This is our Prom”. Another sign went up asking if Conan would be the entire audience’s Prom date. Once again Conan accepted. He then stated, “If anyone asks you if you went to the Prom, tell them ‘Yeah!  I went with Conan Gray and his friends!’”. I found this heartwarming. There’s no way of knowing who had attended this concert as an alternative to their prom, but in about ten years they’ll realize they were in a more memorable place.

The concert flew by. In fact, I felt like it was a little short.  The setlist only had ten songs with no encore. This could have been due to Gray’s health.  While Conan is still at the beginning of his career having only an EP and a few additional singles, I think the set could have been extended a little with a couple of covers.  That being said, Conan could have played for another hour and I don’t think it would have been enough for his fans. Leave them wanting more, right?