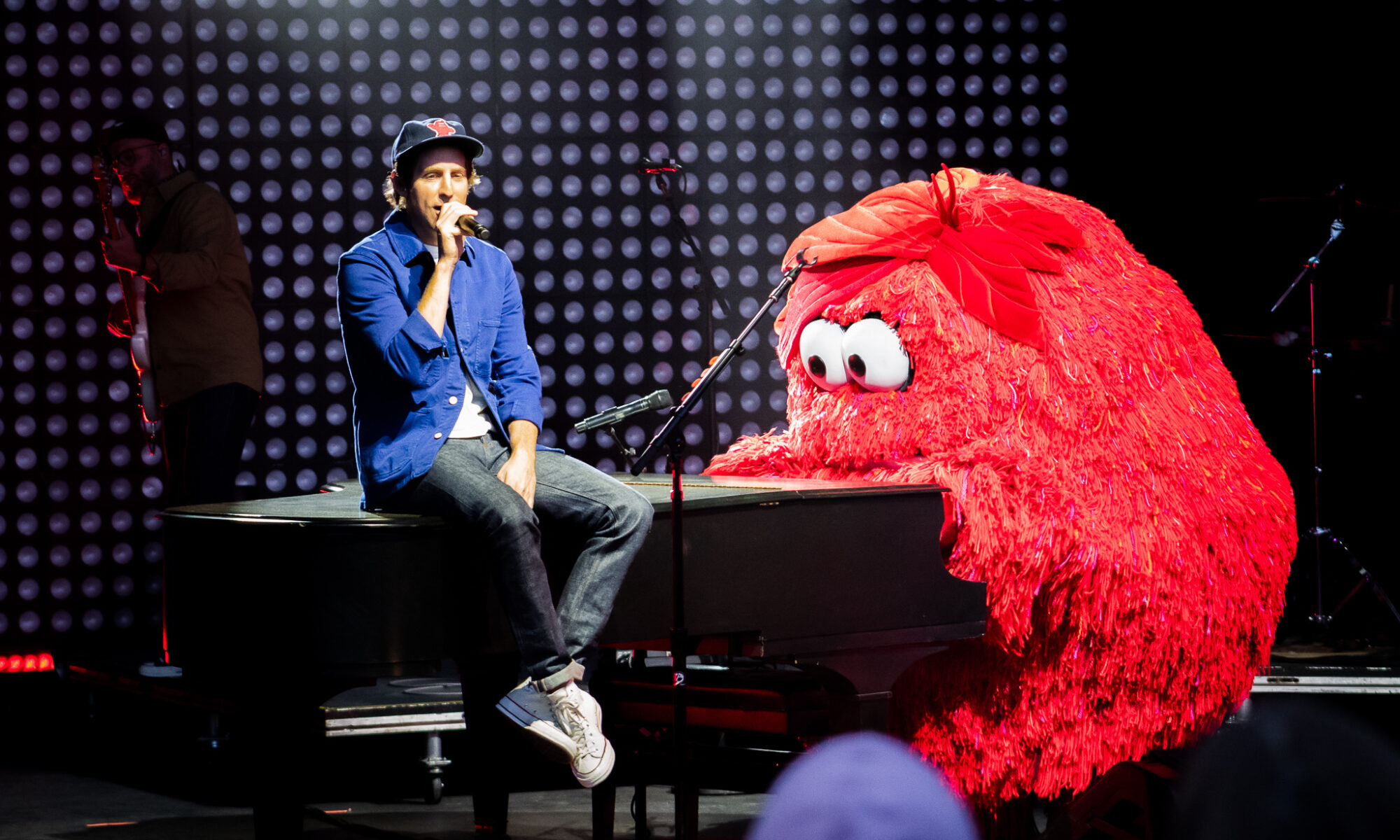 Ben Rector fans braved a windy, chilly night at the Sandy Amphitheater on May 19, 2022. But I think that any one of them would say it was worth it! The show was the second date that Ben Rector, along with Jake Scott, Stephen Day, and Jordy Searcy, played in Utah this week. This date was the first show to sell out on The Joy of Music Tour, and it sold out quickly. So that should give a hint at the excitement and anticipation around this concert!

Jordy Searcy and Stephen Day kicked off the night’s musical events. I discovered both of them a month or two before it was announced that they would both be touring with Ben Rector. So I was really looking forward to seeing them as the openers! To my surprise, they both came out onto the stage at the same time. They introduced themselves and made it a point to let the audience know that they were not a group. Since it was still light outside, the stage wasn’t lit by anything but the daylight!

Jordy started off by singing one of his hit songs, “Love & War in Your Twenties”. When that song was over, it was Stephen’s turn. He sang a song called, “On Top of the World”. I didn’t know their setlists prior to the show, but I was pretty happy with their opening songs. They happened to be my favorite songs by each of them! It was fun to see when one sang, the other would harmonize and play their guitar to help in accompanying them!

They both had enthusiastic personalities that reflected out to the audience. Jordy and Stephen each sang another song before their opening set was over. They told the crowd not to worry because they would be back as a part of Ben Rector’s band. The crowd was so happy about that! Stephen’s last song was a mash-up of Josh Turner’s song, “Your Man,” and Stephan’s song, “Hey Lady”. It was a lot of fun and flowed well together!

The next opener was Jake Scott. A lot of the crowd made it very clear that they knew who he was. They were so excited that he was there! People were up on their feet, singing along from the first song, all the way through his whole set! He played a song called, “Texas Girl,” that the audience really liked. Prior to Jake coming on stage, I had seen a group of girls with shirts that looked like they had been homemade. They said the name of that song title on them. I didn’t realize their significance until after Jake sang that song! He also sang a song that he wrote with the hit country star, Russell Dickerson, called, “She Likes It”. Many people in the crowd knew it and sang right along!

Following, “She Likes It,” Jake said, “I think that Salt Lake City is my favorite place to play in the country!” The audience cheered and cheered in support of that statement. Next on the setlist was a sweet song named, “She”. It was written about his wife, whom he called his muse. One of the biggest fan favorites came next – a cover of, “All Too Well,” by Taylor Swift! Everyone was singing along, even concertgoers that I didn’t expect to know the lyrics!

During his song, “Tuesdays,” he stopped in the middle of the song to recognize a group amongst the crowd that had their flashlights on their phones on for the song. Jake said, “These guys have the right idea! I want to see an ocean of phone lights even though it’s daylight!” Those in attendance delivered, and the still light atmosphere had an extra glow for a few minutes! He finished off his set with a song that had been requested throughout the night via shouting from fans in the audience! As he played, “T-Shirt,” the many that knew it happily sang along!

I looked around at the crowd while everyone was waiting for Ben Rector to come on, I noticed a variety of different approaches to passing time and staying warm amongst the colder temperatures, chilling winds, and the occasional sprinkle of rain! Some had on a coat or two and stood chatting with friends and those around them, while others laid on the ground, wrapped up like mummies in multiple blankets! Some people passed time in line to get merchandise or food, too!

Ben Rector’s set started with a big, furry red character taking the stage. It looked like it could’ve belonged on Sesame Street. Its name was Joy. Joy began to play the piano, and then Ben appeared and sang his song, “Dream On”. After that song ended, he said that he was wearing a different shirt than he usually does because it was so cold that night! As he sang a song called, “Living My Best Life,” it was apparent that those in attendance were feeling like they were doing just that! From the get-go, fans were so genuinely and obviously happy to be there, brimming a smile ear to ear, and just enthralled with what was taking place in front of them! The sweet, joyous setting almost brought me to tears to see everyone so glad to be there!

Ben sang his song, “30,000 Feet”. He stopped singing for a moment and the crowd stepped in and sang a portion of the song. He paused and said that that made his night! One of his most popular songs is, “Forever Like That.” A song usually used for proposals, weddings, or other things like that. He said he was going to play it the way he wrote it originally. He dimmed the lights and had a projection of stars on the stage. Cowboy hats were put on those on stage, harmonicas were played, and the classic song took on a country feel! He sang a song called, “Range Rover,” almost completely acapella with gorgeous harmonies! The crowd sang along and were elated when Ben snuck in a nod to BYU by adding, “Go cougars!” into the lyrics.

As the song, “The Men That Drive Me Places,” started, I thought to myself, “This one is my favorite,” and seconds later, someone from across the amphitheater yelled out exactly what I was thinking! The previously giddy, loud crowd fell quiet while listening to the moving song. Ben and his band also did a fun cover medley of Toto’s, “Africa,” Paul Simon’s, “You Can Call Me Al,” and Thin Lizzy’s, “The Boys Are Back In Town,” that got the crowd back up and dancing and singing along! After a few more songs, Ben said that they were going to go away and come back for a few more songs.

His first encore song was a new original, only ever performed the night before, called, “Utah.” The fans were so happy with this! It was such a fun recognition to so many in our state that love Ben Rector. Something he definitely realizes and reciprocates! He finished off his set with his hit, “Brand New,” which brought so much energy!

Ben Rector’s Joy of Music Tour was really just that. It was so refreshing to be surrounded by genuinely happy people who fed off the joy exuding from those performing on stage! The show was a positive, safe place for people of all ages to have a fun time enjoying a night of great music!