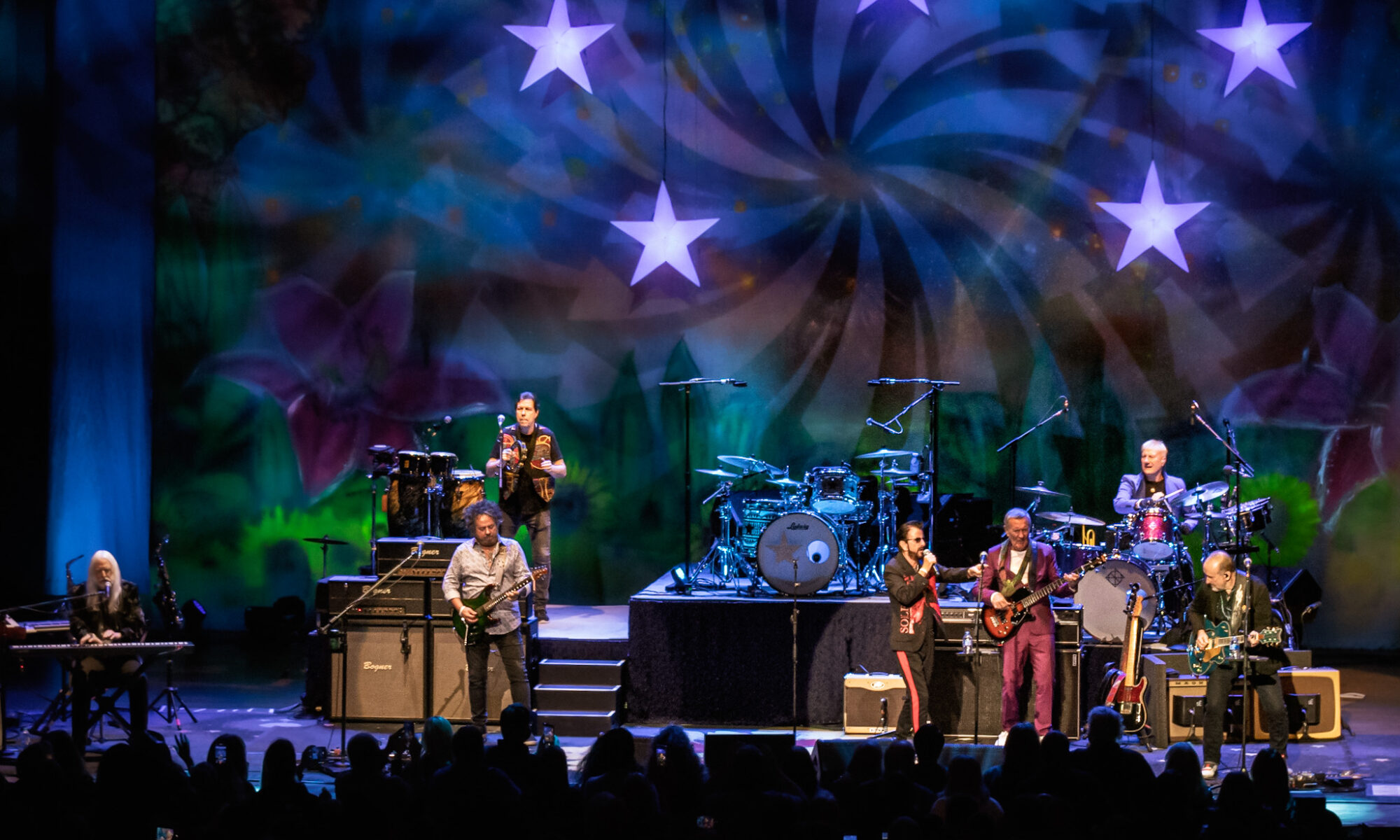 It seems like any trip I’ve taken recently has been to see an artist that wasn’t stopping in Utah. Which is surprising considering all of the great concerts that come through our state! There are some tours I just won’t miss no matter where it’ll take me. Ringo Starr’s show was one of those. As a lifelong Beatles fan, I’ve been hoping for the chance to see him for what seems like my entire life. This time my concert travels took me to my home state of Washington. I had the honor of photographing Ringo Starr and His All Starr Band in Seattle! Since they weren’t making it down to us on this tour, Utah Concert Review happily went to them!

Having cancelled seven shows prior due to COVID, Ringo and His All Starr Band resumed the tour at the beautiful Benaroya Hall in Seattle, WA. The sold out show brought in fans of all ages. Many were dressed in Beatles shirts. I noticed that others donned Paul McCartney’s Get Back Tour tees from his stop in Seattle a few months prior, and some even dressed up in 70s style outfits!

The setup of Ringo Starr and His All Starr Band is really cool. As their name suggests, the band includes not only the former Beatle, Ringo Starr, but also many other notable musicians. Warren Ham and Steve Lukather joined the group after being in the band Toto. Colin Hay was in the band Men At Work. Hamish Stuart used to be in the band Average White Band. Talented and accomplished musicians Edgar Winter and Gregg Bissonette are also key members of the band!

The stage glowed with a patterned background that would continue to change colors throughout the night! Stars hung in front of the backdrop which added some nice dimension. Ringo and his band didn’t have an opening act, so it was the main event right off the bat! The All Starr part of the band got on stage first and began to play, then Ringo ran on stage! The crowd was ecstatic! It seemed that, just like me, seeing the legendary musician along with his star-studded band was a bucket list item that one could hope to check off! The group opened up with a Carl Perkins cover that Ringo recorded with The Beatles called, “Matchbox.”

Though he is the most well-known for his drumming, Ringo spent the first three songs off the drums up among many of the other band members. After the first few songs they preformed, “What Goes On”. Which was a song that Ringo sang when he was with The Beatles.

After a few Ringo specific songs had been played through, an Edgar Winters song was next! One of the coolest things about this concert was the setlist being full of hit song after hit song! Winters and the band played his song, “Free Ride,” then the band played Toto’s, “Rosanna,” and, “Pick Up the Pieces,” by Average White Band. Following that run, they played, “Down Under,” by Men at Work, and it really seemed to be a crowd favorite!

It’s always intriguing to see the uniqueness of each crowd at different shows. It was apparent that everyone was happy and excited to be there! Probably one of the more unique characteristics of this crowd was the audience member’s constant rotations through standing up or sitting down. At most concerts, people either stand up or sit down throughout the majority of the show, but not there! People would be up and dancing for their favorite parts of the song. Then they would sit down for a little while, but when a part would be played that resonated with them, they’d be up on their feet again!

Throughout the entire performance, the band’s energy was high! They were very engaging. It was obvious that they were all doing what they loved and were having a great time! It was amazing how clear and strong their voices were after decades of performing! Hamish said, “We had a hiatus this week, but all is well,” and then Ringo pointed at himself and said, “I’m feeling so much better, thank you!” You definitely would’ve never guessed that he had just recovered from COVID days before! They all worked so well together, too! Everyone of them seemed to enjoy jamming no matter who’s song it was.

Some more Ringo songs were next. He hopped off of the drums for his song, “I’m The Greatest.” Following that one, he sang his legendary Beatles tune, “Yellow Submarine!” Fans went wild for that one! During a little speaking part in the song he added in, “We’re going to Seattle? Okay! Let’s go!” And that was also a hit with everyone!

After that, Ringo left the stage, and the others said, “Don’t worry, he’ll be back!” They played Average White Band’s song, “Cut The Cake,” and Edgar Winter’s song, “Frankenstein!” During and in between those songs, the band jammed out! There was a lengthy, incredibly impressive drum medley of popular classics that was a treat to witness!

Soon Ringo was back for his Beatles song, “Octopus’s Garden.” He said that he left with an ocean song and came back on with an ocean song! A few more songs were played through and loved by the crowd, and then another that I was especially looking forward to came next! The band played, “Africa,” by Toto, and people there were just as excited, if not more excited, as I was to hear the iconic hit live from some of the original band members! The hits kept coming with The Beatles’, “I Wanna Be Your Man,” Edgar Winter’s cover of, “Johnny Be Good,” and Men At Work’s, “Who Can It Be Now?”

Like I mentioned previously, it seemed like nearly every song was a hit tune that everyone knew and just simply iconic, and Toto continued that again with, “Hold The Line.” Everyone was quick to get on their feet for that one!

The last songs were all Ringo songs starting with, “Photograph,” and finishing with more songs from his time with The Beatles, “Act Naturally,” and the beloved, “With A Little Help From My Friends.” The audience all sang along, many stood in awe of the night they had witnessed, while others jumped up and down with excitement for the same reason! Ringo left the stage and came back, and he and the band sang an excerpt of fellow Beatle John Lennon’s song, “Give Peace A Chance.” Peace signs were held high in the air, as well as displayed in lights on stage!

Ringo Starr and His All Starr Band’s stop in Seattle was a music lover’s dream. To have such legendary musicians come together to provide a show of well known and well loved songs was such a treat for all who got to be there! Every member of the band put on a fantastic show!

I felt so lucky to have the opportunity to not only see the show, but to cover it, especially considering many shows prior had to be canceled due to Ringo having COVID. Two days after this show, the seemingly impossible happened, and it was announced that poor Ringo had tested positive for the virus again! The rest of the tour has now been canceled, which makes me even more grateful for the experience, and of course sending all the well wishes for smooth and quick healing Ringo’s way!