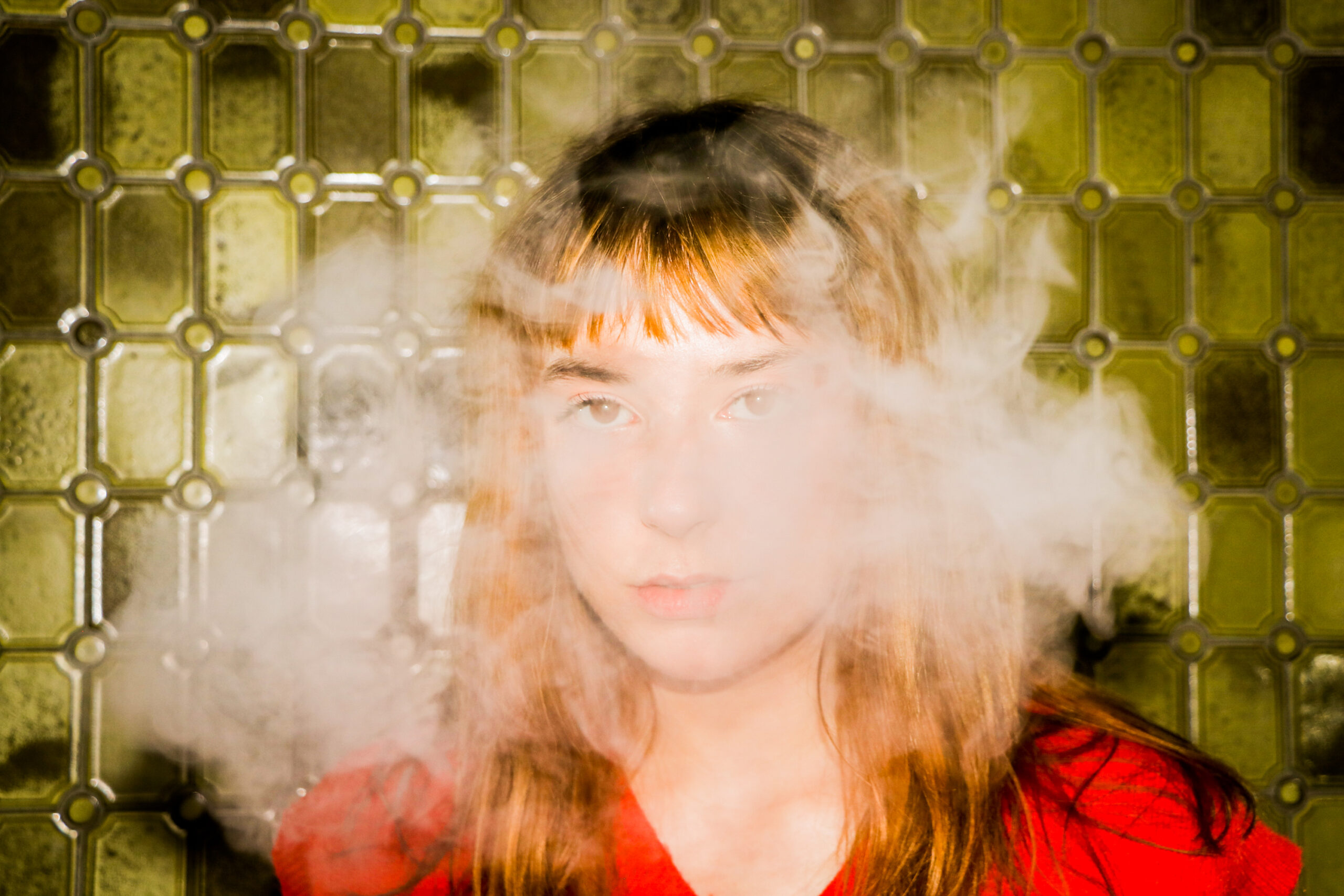 Twenty-one-year-old artist, songwriter, multi-instrumentalist, and producer Jordana recently released her new record Face The Wall. Jordana is a sonic chameleon, with every new release exploring a different and unexpected side of her musical palette, while remaining just as impressive and captivating as the previous one. This new record sees Jordana put her handmade, DIY indie pop charm to the side, in lieu of more polished pop bangers as she stepped into the studio for the first time.

Following the impossibly catchy “Catch My Drift,” the spare pop gem “Pressure Point,” and the 90s alt-rock pop homage “To The Ground” is “Go Slow.” The ascendant, titular track brings us to the heart of this album. Jordana explains, “‘Go Slow’ is about facing your self brought battles and acknowledging your imperfections. It’s about taking the time to work on yourself, no matter how much you want to rush it, to be the best version of yourself you can possibly be.” Listen to the song and watch the video directed by Luke Orlando (Charli XCX, Magdalena Bay, Tove Lo) HERE.

Jordana will be supporting Local Natives as part of the Ogden Twilight Concert Series on Thursday, August 4. Click here for tickets.

We had the opportunity to visit with Jordana a few weeks ago. She was so fun to talk with. We’re excited to see where her career takes her. Enjoy!

UCR: Hi Jordana! Where am I catching you in the world today?

Jordana: I am in my apartment in Brooklyn.

UCR: I love it there. Oh, cute. So you’re about to start the tour, correct?

UCR: So how does it work? You have your own band, your own set time? Do you have to work anything out with the actual tour? Or are they just like, “Okay, this is how much time you have. See ya at the start of the tour on Saturday. I guess when I when I’m talking about is, when you come to Utah, you’ll come out, you’ll perform, then local natives will come out and perform, right? And it seems like this one big, cohesive, like everybody’s together. I know that’s not really the case. But for fans who watch it, like how does that all break down? Do you interact a lot with them? Are you on tour WITH them? Or is it just kind of like, we’re playing at the same place, on the same date?

UCR: It kind of does! Have you been on a lot of national tours so far? Is this one of the early ones? I know you have a couple albums out now.

Jordana: My first tour was last year with TV Girl. And I actually went to Salt Lake City with them last year. And that was our biggest venue I think. I don’t remember what it was called.

UCR: Was it The Complex?

Jordana: Yeah, it was The Complex! It was incredible. That was last year. And then I went with Wallows in May and had my own little headline break off tour thing in June. So this will technically be my fourth, I guess.

UCR: Is it still pretty surreal to think that you’re doing this? It’s like a dream, right? You’re out on the road? All the things you think of in your room? In high school?

Jordana: Yeah! I gotta to Local Natives when I was playing a video game. I’m a really big fan of this video game called Life to Strange. And the soundtrack of the game is amazing. And Local Natives had a song in the soundtrack. I was like, Oh my God, this band is great. And now I’m opening for them on this huge tour. And it’s just like, if I told my 15 year old self all this stuff has been happening. I don’t know, just kind of have to like stop and remind yourself like, every once in a while, because you kind of lose, well you’re so focused on doing it that, Yeah.

UCR: Well, you’re now in the trenches of the business aspect of it where you can get road weary you can get tired and I’m sure there’s times you have to remind yourself oh, wait, I love this. Because I think as us you know, watching like, just think it’s incredible every day all day. I’m sure for the most part it is but there are struggles to it. I don’t think people really realize that it still can be a grind and tiring. So I’m sure there’s times you have to remind yourself, oh, I actually do love this. And you can correct me if I’m wrong. It’s probably the times where you are not on the stage. It’s all the things that go into the rest, like talking to people like me and things like that.

Jordana: Sometimes, I guess, when you finally find somewhere you’re comfortable and you keep raising the bar. And whatever you’re doing is gonna be like, I have to keep doing this? But then I’m just like, wait? No, I dreamt of like being able to do it like this. So you know?

UCR: I’m sure there’s a certain pressure you feel to keep growing and keep doing new things. And I’m sure that feels like, do I really have to do that?. And then like you said, you remind yourself No, this is what I want to be doing.

Jordana: Yeah, like, if I have a problem with that, then it’s something else. It’s not this main thing that I always wanted to do. There’s like, there’s gotta be something else to face.

UCR: Let me go back a little. I’m curious. How did you get into music at all?

Jordana: My dad played the organ at the church. This one time I went was violins there? I was like, wow, that’s cool. What is that? I think I was eight. I was like, I want to do that. “Mom, I want to do that”. She’s like, sure. Yeah. All right. Yeah, sure. You want to do it. And then I like I started playing violin and it’s my first instrument. And then got into like, the whole classical thing in high school and like, leading up to that. Then started playing the ukulele and stuff like 14 I think and then started writing stuff on guitar when I was 17. And then started releasing things like started making stuff.

UCR: So who found you?

Jordana: My manager in 2019. Then the first offer that I got was from Grand Jury and then signed with them. Because because they’re because they’re nice. And I thought the bill was cool. Like well, hippocampus, Samiha, Twin Peaks.

UCR: Yeah they have a cool roster, that’s for sure. Well, that’s that’s awesome. Did you ever think that you’d pursue something in the classical world? Or do you just realize that’s not my thing?

Jordana: I thought that I was gonna be playing in big orchestras and stuff, maybe if I set my mind to it. But then as soon as I was doing my indie phase, and I was already playing instruments, I was like, really motivated in doing that because of finding like, I guess new interests. Inspired me, “oh, I want to be like them”.

UCR: Yeah, that makes sense to me.

Jordana: I wanted to make awesome music and be really cool.

UCR: Well you’re doing it! Do you remember the first time you performed live?

Jordana: I don’t know if it was the first time. Well I was like a cover girl before that so I had my like little back up thing where I was like this is my this is my cover of one of my favorite songs. I didn’t like have original music when I first started performing in front of people.

UCR: That’s how I think a lot of people start. They play who they like and then they start to get their own ideas. What were some of those songs? What were your your cover song hits?

Jordana: I was a really big fan of Dodi Oh, have you heard of Jake Bug? I would play some Jake bug songs like “Lightning Bolt”. Shakey graves.

Jordana: Yeah, I was a hip kid like that. I was an indie hip kid. Yeah, just like borderline, sometimes borderline country stuff. Just fun.

UCR: Gotta have it. So what can we expect from your set on this tour? First of all, let me ask you. Are you playing alone? Do you have a band with you?

Jordana: I have a band. And I’m gonna be doing some of the TV girl stuff. Some of my new album.

UCR: Sounds like a good mix. So you’ll be here in Utah as part of a series we have called the Twilight Concert Series. It’s an outdoor amphitheater and general admission place. So the good part is people show up for the openers. You might have seen that a little in at The Complex. But here in Utah, fans show up for the openers, and they’re very supportive. And so I think you’re gonna have a really fun time here.

Jordana: So I was taking this guy on stage with me. Where is he? Here he is. This is the guy. So I bring him on stage and I like raise him up and I like put him somewhere hide him somewhere. And this this person, like all the way in the back, like just raise up their hand and they had their Gumby too and it was amazing. I don’t know, there’s something magical about Utah. I don’t know how they knew. Maybe I shared something. But, I’m gonna have fun.

UCR: It’s gotta be so random. When have you ever thought of getting to play this show and this random state in this random town, and people are gonna come see me. That just has to be the strangest thought.

Jordana: I think about that like, existentially every day. It’s crazy that I’m playing with bands that I love. Like, what the hell. That’s weird. Me?!

UCR: I’m gonna let you go. I’m so happy for you. The music’s great. I’ve enjoyed listening to this new album. I think you got a good thing going, so keep it up.

Jordana: Thank you! Are you gonna come to the show?

UCR: Yeah, I’m really looking forward to it. You have a great voice and I’m sure it’s even better live.

Jordana takes the Ogden Amphitheater stage at 6pm. She will be supporting Local Natives on their tour. Click here for tickets!