You know when you walk into a venue and there’s a sign taped to every door warning of lasers, flashing lights, and pyrotechnics, that you’re in store for quite an experience. And what an experience it was! Trans-Siberian Orchestra is celebrating their twentieth anniversary, but from the looks of things, there are no signs of slowing down anytime soon.

I was thrilled to be invited to review this show. I have never seen TSO in concert, but I’ve heard from people that have seen them in the past that this show is a must see. And of course, like many of you, I’ve heard their song “Christmas Eve (Sarajevo 12/24)” every year during the holiday season in commercials, at neighbors homes when they’ve synced their lights to music, or on various holiday playlists. But other than a recommendation to see them live, I had no idea what I was in store for.

Now because the show is Christmas themed, Trans Siberian Orchestra has a very limited window that they tour this music. They start in mid-November and finish just before New Year’s Eve. And because they are in high demand, but can’t really extend their tour to add dates, they’ll play two shows in a day. Such was the case here in Salt Lake City. I went to the 4 PM show, which was followed by another concert at 8 PM. Keep in mind, this show runs for two and a half hours. The 4 PM show started around 4:15, which means it ended at 6:45. The doors for the second show were to open at 7, and then that show I imagine started around 8:15. So before I talk about the concert itself, I have to give a huge shout out to the staff at Vivint Arena. They were so friendly. They advised any lingerers that the time had come to depart, but no security or usher was rude or pushy. We got it, they had to reset for the next show. And TSO’s crew deserves praise as well. We were told they had six hours to set up the enormous stage. Then to have to reset everything from instruments to lighting to the pyrotechnics is nothing short of miraculous in my opinion. On that note, on with the show…review!

The house lights dimmed, and that was the last time Vivint Arena was dark. Sounds of thunder cracked, the enormous curtain was raised to reveal an impressive and huge digital screen. Silhouettes of the band slowly appeared. Then a stage with drummer, Blas Elias, and keyboardist Vitalij Kuprij lowered down like an elevator. The audience was already into it, applauding the first of many special effects to come. The show then opened with “Night Enchanted” and “Winter Palace”. Midway through the songs, I looked up, and I noticed violinist, Asha Mevlana, bassist, Johnny Lee Middleton, and guitarist, Angus Clark were lowered from the lighting rig to the stage on individual platforms connected by cables. We’re just through the middle of the first song folks, and I’m already blown away. These effects are things that some bands will never do and if others do them, those are the effects of the whole show! But not TSO. They were just warming up.

The show continued with their story “The Ghosts of Christmas Eve” which was narrated brilliantly by Phillip Brandon. I must admit, I feel very unqualified reviewing this show because as I looked around the audience people were elated that they were doing this narrated story. I had no idea this is what happens in a Trans Siberian Orchestra concert. From what I gathered they perform one of their stories in the first set, then play their best songs not included in the story.

There was a ten-person choir consisting of five women, and five men. To call this group a choir is borderline disrespectful though. I should call it an ensemble of soloists. The talent level in this “choir” was beyond compare. Just about every vocalist had their moment to shine with a solo or a duet. Here’s an example of just how talented these singers were. Jeff Scott Soto, one of the male vocalists comes from a decorated rock history. Most notable as a brief but pivotal stint as the lead singer of Journey. Steve Perry replacement, Steve Augeri was on his way out of the band due to major vocal damage. Before the infamous story of finding their current lead singer Arnel Pineda on YouTube, Soto stepped to the microphone to take on the lead singer duties to help Journey finish their 2005/6 tour. Feel free to look it up. He did a great job for them, and while he didn’t end up as their permanent lead singer, I think it says a lot of his talent level that such a huge band would look to him in their time of need.

And he was just one of ten amazing vocalists. Each one more impressive as the rest, if not as impressive. I don’t know how to even pick which ones stood out the most to me. But gun to my head, the two vocalists along with Soto would have to be, Rosa Laricchiuta and Chloe Lowrey. But ask me tomorrow and I’ll probably give you three or four different names. I love great vocalists. So the fact that this show had ten outstanding singers, was almost too much to handle. I kept waiting for one of them to be kind of meh. But they were great, and I love it.

After “The Ghosts of Christmas Eve” ended, founding member, guitarist and musical director, Al Pitrelli addressed the audience. He told us how much he loved coming to Utah. He mentioned that this was the first city where they played two shows in one day. He paid tribute to Paul O’Neill, the man who put Trans Siberian Orchestra together, who passed away almost two years ago.

Trans Siberian Orchestra is a faceless band. I mean, there are multiple guitarists, keyboardists, vocalists, an orchestra, a violinist, and a narrator! Some have been with TSO since the beginning, but many others are relative newcomers. So it would be almost impossible to have one clear-cut front person. I’m sure fans have their favorites. But the face of the band to me is the stage and the effects, and the distinct musical style.

The staging blew me away. Sometimes literally! Now I mentioned the number of band members being lowered from on high, but that was just the beginning. There were lasers, that shot around the entire arena. I could feel the heat from the elaborate pyrotechnics, which was shooting from all over the stage. And once I thought I had seen it all, the action moved to the back of the arena. Two stages were connected to crain like lifts. The stages rose and moved above the arena floor. Then a huge TSO sign lit on fire and blew flames in since with power chords or drum fills. Platforms from the main stage rose to about twenty feet in the air, lifting several band members to a point of the arena that hadn’t yet been touched.  I was seated in the 9th row on the arena floor.  Don’t get me wrong, the seats were incredible.  And this is a sentence I thought I’d never write, but I think I was almost too close!  Pretend I didn’t say that!  What I mean is, there was so much to take in, that I felt like if I was ten rows back I may have had the visual range to see it all.  That being said, if someone asked me to switch seats I would have turned that down a million times!

If you were to tell me, “Hey there’s this band, and they play Christmas, but it’s also Hard Rock.” I would probably say, ‘Pass’. But I came away from this show totally impressed. It works! These songs and themes somehow go together. I like hard rock. And I like Christmas music. So why wouldn’t this work? The mashup of musical style bleeds into the audience as well. I looked around the arena and noticed a wide range of fans. I saw complete families, families with really young children all the way to grandparents. Then I saw what you might call a typical rock fan. Long rocker hair, leather jacket, and a band t-shirt. I never thought I’d see the two fingers up rock sign at a Christmas concert. But at TSO, I did. And it was well deserved.

If you have never seen Trans Siberian Orchestra in concert, you must check it out. Unfortunately for you, they won’t be back for about a year, but you’ll have time to prepare yourself for the mind-blowing effects and the amazing talent within this hard rock orchestra. 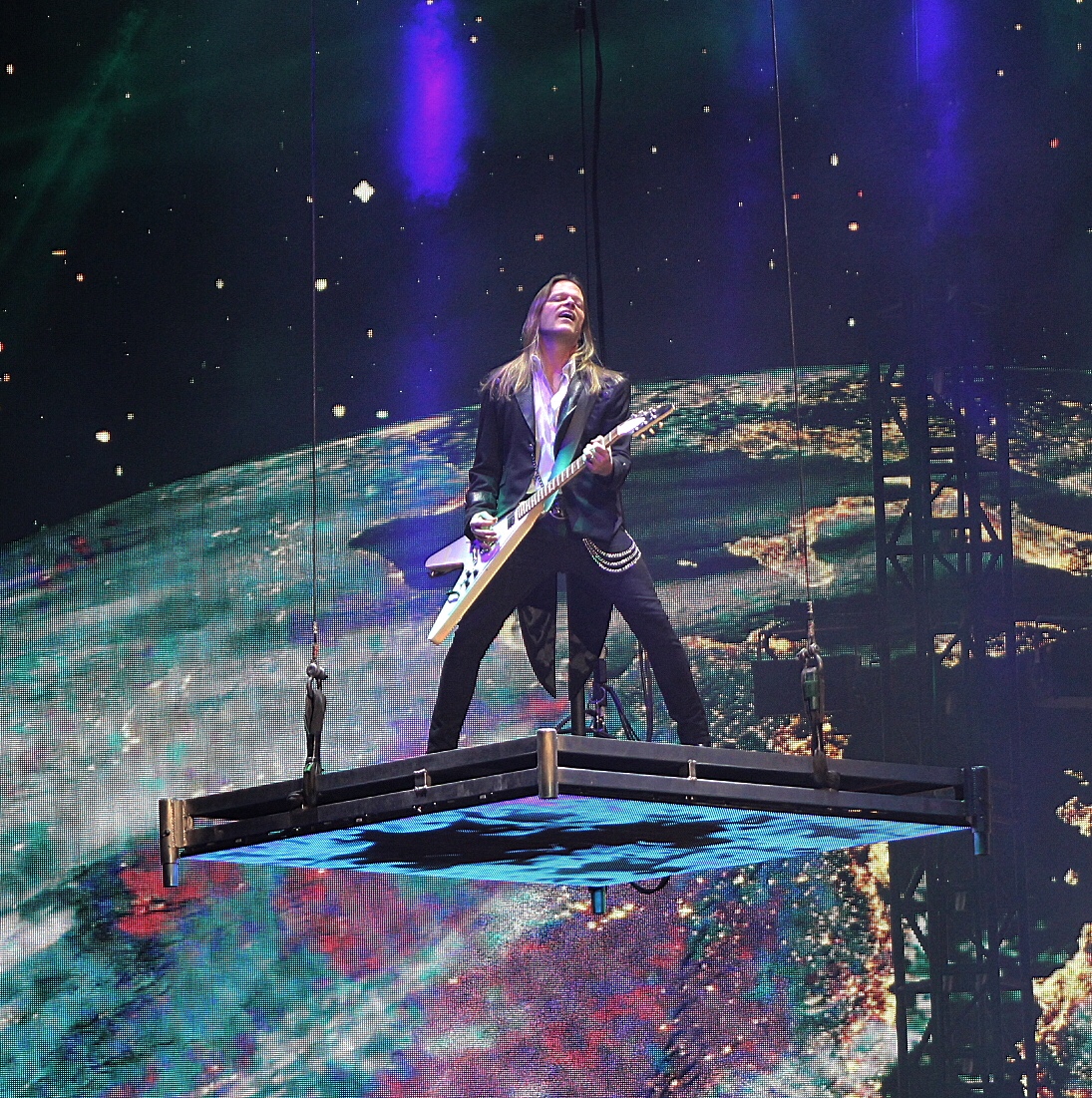 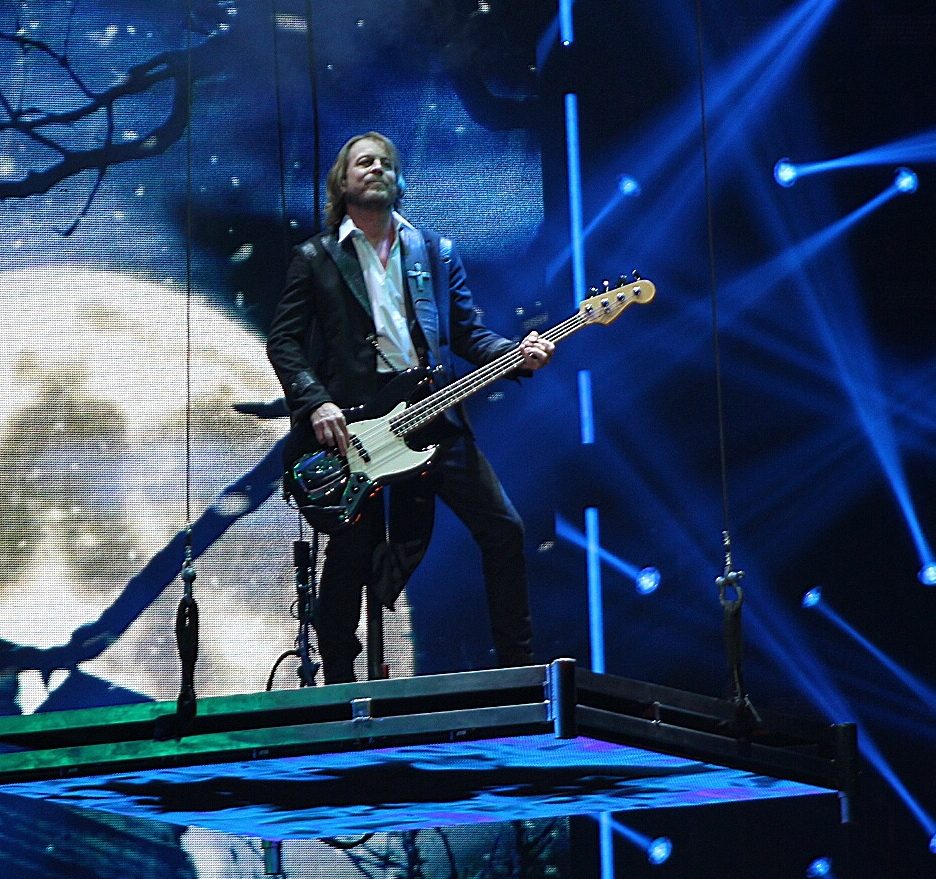 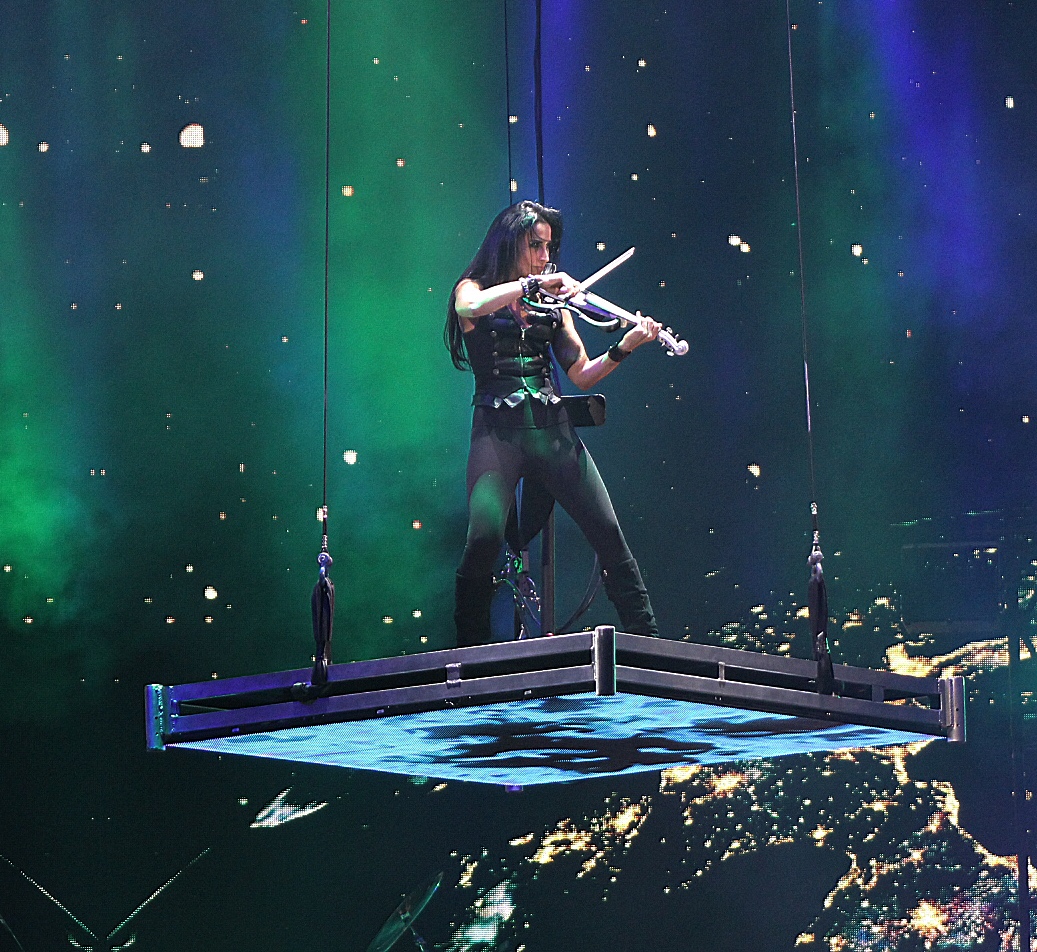